Don't use plagiarized sources. Get your custom essay on
“ Designer Babies ”
Get custom paper
NEW! smart matching with writer

) of your baby. Crazy right? To think, one day we will have the technology and resources to do this. Although this topic of “designing your baby” is fairly new and the science has not been perfected, it is a very big possibility in our near future. The issue with this technology is whether it should be allowed or not. Parents always want the very best for their children, but my morals lead me to believe that parents should not be allowed to alter their children in this way. In this exploratory essay I hope to find solid and specific information to help me decide my stance on this question: Should parents be allowed to design what their children look like?

In English 2000 we were introduced to online search engines that could be used to find information on our topics.

The search engine I found the most handy was the EBCO Host website. This site lead me to many resourceful articles that truly helped me better understand the topic of designer babies. The first resource I came across is titled Designer Babies: Eugenics Repackaged or Consumer Options? By Stephen L. Baird, technology education teacher at Bayside Middle School, Virginia Beach, Virginia. Baird describes how journalists are the ones who have coined the term “Designer Babies”. He goes onto to explain that this term is simply a shortened phrase that represents certain reproductive technologies that allow expecting parents to have more control on the birth outcomes of their child (15).

In vitro fertilization (IVF) and preimplantation genetic diagnosis (PGD) are two procedures of genetic engineering that are described through specific cases throughout this document. “Almost three decades ago, on July 25, 1978, Louise Brown, the first “test-tube baby” was born. The world’s first “test-tube” baby arrived amid a storm of protest and hand-wringing about science gone amok, human animal hybrids, and the rebirth of eugenics” (Baird 12). This “test-tube” case is the first case explained by Baird. The purpose for this example case is to describe how using the in vitro fertilization reproductive technique is not necessarily a bad thing. Although many voices of the public spoke against Brown, the “test-tube” baby, she was born as a completely normal human child.

This is just one of the multiple cases that show the views and opinions of the public. Baird captures the various arguments against designer babies and arguments for designer babies. Some people share the opinion that there is nothing wrong with designer babies because they assist in preventing particular genetic diseases and reduce the emotional and financial burden for parents of children with these altered genetic diseases (Baird 15). On the other hand, certain people feel strongly against designer babies because creating “perfect” children could evolve into changes in the physical appearance of the children before they are even born (Baird 15).

Baird’s document on designer babies was very informative in a way that helped me better understand the different sides of the argument on designer babies. I also felt as if this source gave me a better understanding on the basics of this topic such as the medical terms and procedures. Baird’s work could be very enlightening for individuals who do not have a complete understanding of what it means to be a designer baby. For example, before reading this I simply assumed designer babies were meant for physical alterations, and did not consider it to be beneficial to health alterations such as preventing genetic diseases. This paper did not hinder me to be for or against designer babies because I received equal information on both sides of the issue.

My second source, Designing Babies: What the Future Holds, came from the same search engine as the previous article. This article was written by Dr. Yury Verlinsky, graduate, postgraduate and PhD of Kharkov University. Verlinsky goes into detail about the different meanings the public has of designer babies. His definitions of designer babies include the sex of a child being chosen, testing embryos for unwanted disorders and diseases, or for cosmetic reasons (24). Verlinsky goes through the multiple views on the advantages and disadvantages of allowing parents to use the technology to create designer babies. One particular advantage of designer babies, pointed out by Verlinsky, that caught my attention was, “insurance companies, for example, may refuse to cover newborn malformations that could have been corrected before implantation” (25). This goes to show how people may be economically pressured into the technologies of designer babies. I found that this particular article had a lot of the same factual information as the previous article. Certain ideas from the two articles stuck out in similar ways. Even some of the same phrases were repeated in both articles that I have come across. Although there were similarities, this article also brought some new ideas to my attention. The first article contained many real life cases while this article used many hypothetical possibilities. Some of the hypothetical possibilities were a little out of the box, but they really got me to think about the circumstances that the designer baby technology could lead to.

Finally my third source, also coming from the same search engine, is A Brave New World of Designer Babies By Sonia Suter. This particular article goes in depth about the similarities and differences of the eugenics and neoeugenics movements. As stated by Suter, the eugenics movement can be explained as “the mission to reduce disease in the population, the efforts to protect the public fisc, and the goal of reducing suffering. What makes “eugenics” such a complex term is that its practitioners were well intentioned and it meant different things to different people” (900). Suter also explains the meaning of neoeugenics, “Neoeugenics strives towards “good birth” at the individual, rather than state level” (900). When Suter says at the individual level, he is referring to the fact that designing babies is an individual procedure that is a voluntary choice of the parent. In Suter’s mission to analyze the meaning of neoeugenics he brings us as far back to the times of eugenics brought about by Hitler.

Hitler was responsible for a mass genocide of individuals that did not fit his mold of the perfect human. In a way this is similar to the purpose of using gene alterations to make your designer baby. Suter describes how the main difference between eugenics and neoeugenics is the severity of the two (948). Suter states “neoeugenics appears less threatening than eugenics” (948). In the world we live in today we always want what is best for our offspring and ourselves. Suter explains, that those who disagree with designer babies could very possibly fall under the pressures of taking part in these sciences because they do not want their own children to be disadvantaged to the ones that chose to use these technological advances (965).

I found that my final article gave me the most information about the perspectives people have on designer babies. Since the study of designer babies is fairly new, I like how this document uses something from the past to help me relate it to something. This article really went in depth about the positives and negatives of designer babies. Some people are certain that using designer baby technology can help prevent diseases, while others are absolutely opposed to it. These articles have tremendously improved my understanding of designer babies. I was not aware of how truly in depth this term goes. As of now, I would not say I have a solid stance on the question I proposed at the beginning of my essay; should parents be allowed to design their babies? There are just so many different things that this term means and many different sides of the argument. I do not believe that this is a straightforward yes or no question. This is a complex issue that I need to do more research on. At this point, I do not think there is a problem with parents wanting to protect their children and prevent diseases their child is susceptible to in the future, but to physically and characteristically alter a child based on how you want your child to look and act is something I still feel is not something humans should be able to control. 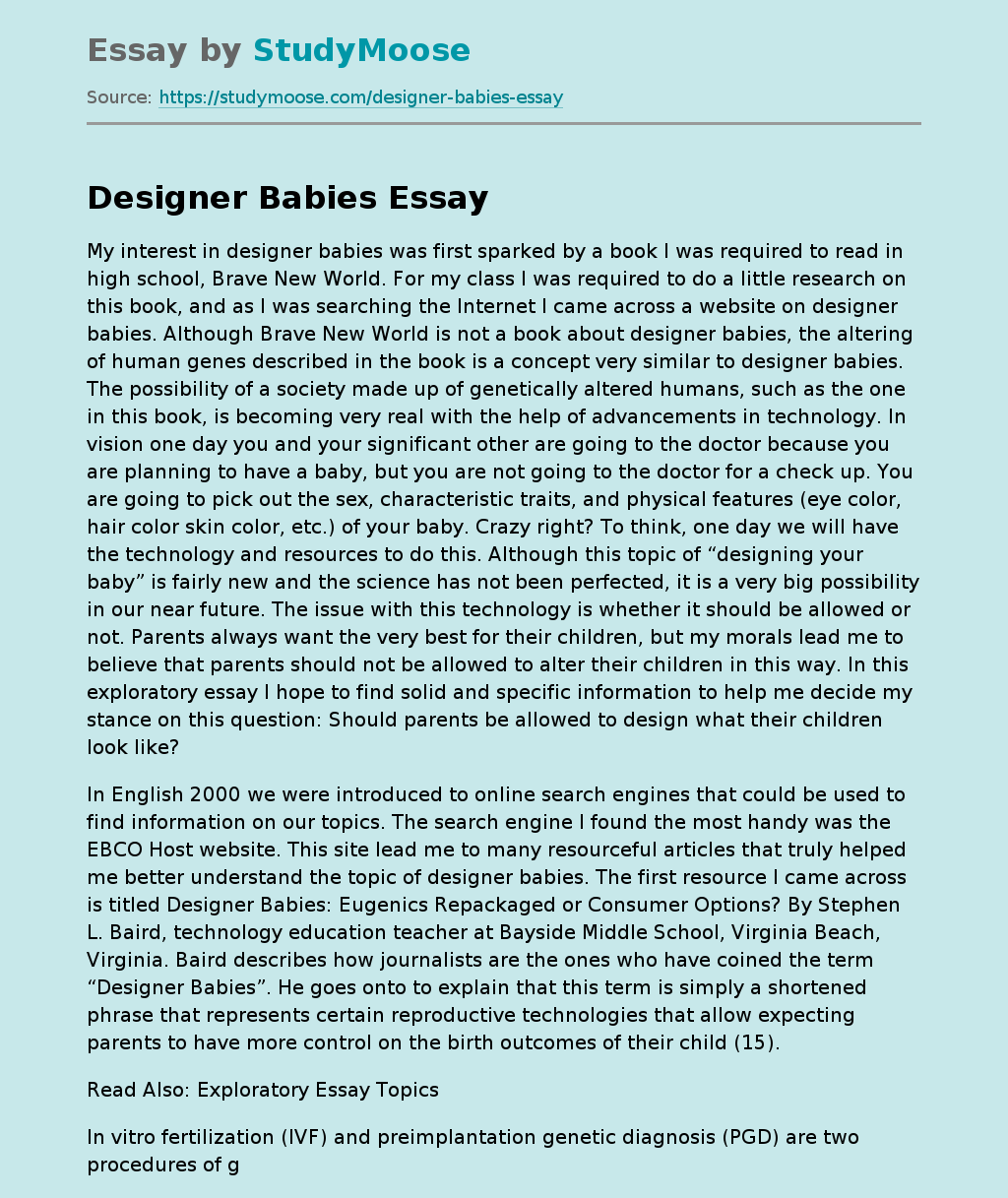