She Can Wear Trousers Too

Nora in Henrik Ibsen’s A Dolls’ House and Elisa in John Steinbeck’s “The Chrysanthemums” face similar circumstances in many ways. Both live with husbands who do not recognize and accept them intelligently, in a confined circumstance with little prospect for significant change. Over the course of time in both stories, both women come to discover how much she is being oppressed by men yet they both react differently to that realization; Nora abandons her family to live her life independently, while Elisa collapses and retreats into herself, accepting that she has no importance and significance in her life and to the men around her.

Don't use plagiarized sources. Get your custom essay on
“ She Can Wear Trousers Too ”
Get custom paper
NEW! smart matching with writer

At first, Nora play the part of the childish, immature and ignorant wife, and Torvald believes her to be nothing more than a Skylark, a squirrel, “a sweet little spendthrift, [who] uses up a great deal of money” (Ibsen 4). These weird nicknames are often accompanied by diminutives like “sweet” and “little”, dehumanizing Nora to a degree.

What is most interesting about these nicknames is that Torvald refers to Nora as an animal. He calls her a squirrel and a Skylark. A squirrel stores nuts for the winter, Nora seems to always want to collect money from Torvald for one purpose or another- of course he does not know that the true reason she collects so much money is to pay off the loan she borrowed. Larks are songbirds which like to sing and tweet, Nora enjoys talking about money and hides sweets from Torvald. Nora recognizes that Torvald does not recognize her intelligence and initially plays along with it.

Torvald on his part thinks of Nora as a little thing, not to be feared of rebelling, something very delicate that can be displayed but must be protected. Like a toy, Nora decorates Torvald’s home, she depends on him and he believes he can toy with her emotions as much as he pleases.

The fact that she may not be called nicknames by her husband does not mean that Elisa’s marriage is perfect. It is in fact a terrible one. It is steady, but it lacks intimacy and passion as both are too absorbed in keeping up appearances with each other to engage in honest dialogue. Elisa’s husband characterizes her as masculine with a figure “that [looks] blocked and heavy in her gardening costume, a man’s black hat pulled over her eyes” (Steinbeck 1). In her husband’s eyes, he sees her as nothing like a woman. Even when she tries to dress up as feminine for her husband by “[scrubbing] herself with a little block of pumice, legs and thighs, loins and chest and arms, until her skin [is] scratched and red” (Steinbeck 4), he still does not recognize her a woman and hastily overlooks the fact that she is all dressed up for him. Elisa appears bored with her husband and her life and pours all her time into gardening the chrysanthemums as they give her the feeling of control. Her relationship between her husband is passive, much like a relationship between siblings.

Society plays a huge role in Torvald and Nora’s marriage. In fact, it seems like their entire lives are built upon societal status and what society thinks of them. Even their house is described as “furnished tastefully but not extravagantly” (Ibsen 1). Torvald and Nora try desperately to keep up with society and what society has taught them which is that the man is superior while the woman is subordinate. They live what society thinks is an ideal marriage. Torvald believes that women’s purposes include housekeeping and amusement but nothing intelligent as that is a man’s job. He wants his wife to look good and their family perfect in front of society, so he gives Nora money whatever amount of money she says she needs to buy clothes and presents for them to look beautified and polished in front of society.

Elisa is not surrounded by children, she is terribly alone both physically and within her own self. We can see how much Elisa suffers from loneliness by the way she desperately shows interest with the only person who shows any interest whatsoever in what she is doing; the tinker. Marriage and society have reduced Elisa to a state of unfulfilled, desperate loneliness where she is not truly able to connect with anyone. As soon as the tinker takes interest, Elisa’s “eyes [grows] alert and eager” (Steinbeck 2). Through the amount of passion she puts into caring for the chrysanthemums, It is clear that her marriage and her position as farmers wife is not fulfilling Elisa and is not creating the necessary conditions for her to thrive in her own self.

Nora and Elisa both are both treated unintelligently by their husbands till the realization of that fact hits them. When realization dawns upon them, they both make two very different decisions. Nora’s decision is not as shocking as it would have been in the nineteenth century when the play was written. Torvald’s selfishness comes upon them almost immediately after he declares his love for Nora, saying, very possessively, that she is his dearest treasure” (Ibsen 57). When he realizes that Nora has taken out the loan, his tone changes to accusing almost immediately as instead of thanking his wife for sacrificing to save his life, he accuses her immediately after telling her he loves her and starts to worry about his reputation. This is the moment when Nora’s eyes finally open to the truth of their relationship. She finally realizes that Torvald “[has] never loved [her]. [he has] only thought it pleasant to be in love with [her]” (Ibsen 66). Torvald has been toying with her emotions all along and that they never had any connection as people, it was more like him playing with his Toy. Nora finally understands that all she has been doing is filling a role as what is dictated a woman by society, she has not been experiencing love and life as she wanted, their marriage was instead, like Torvald having a toy to play with.

Elisa’s meeting with the tinker renews her feelings of femininity and sexuality as a woman, as her husband fails to recognize her femininity and she fails to point it out to him. She at first resists him and is awkward as she is socially isolated, but he can admire the one thing that she loves in her life; the chrysanthemums, something that her husband has failed to do. The tinker romantically describes the flowers as a “quick puff of colored smoke” (Steinbeck 2). The tinker has figuratively admired Elisa by admiring the Chrysanthemums. The flowers symbolize her sexuality and as soon as the Tinker admires them, Elisa “[tears] off the battered hat and [shakes] out her pretty hair” (Steinbeck 3). By doing this action, Elisa’s masculinity has been replaced with femininity, just because someone has finally given her attention. The tinker catalyzes Elisa’s life and, makes her see hope again for herself and her marriage.

Hope crashes quickly to the ground for Elisa however, when her husband, Henry’s best compliment to her after dressing up and trying to look more feminine is that “[she’] look[s] strong enough to break a calf over [her] knee, happy enough to eat it like a watermelon” (Steinbeck 4). This unflattering remark, made ignorantly by her husband starts to crack the happy future she had envisioned in her marriage just a few moments ago with the tinker. Her hope is finally crushed when she sees the flowers she had happily given the tinker on the side of the road. The tinker’s thoughtless action devastates Elisa and feels like rejection of her very soul. He, like her husband, has failed to appreciate all her qualities, and simply listed to her to collect money, not to make her feel unique. This act leaves her with no hope and makes her feel like every man is the same, her femininity and sexuality will never be understood by her husband. Elisa finally realizes that she must learn to be content with a husband who does not recognize her intelligently. Her devastation at this realization leaves her “crying weakly-like an old woman” (Steinbeck 4).

The women in both stories are restricted by society. They are expected to follow the rules of their husbands and not have any individual freedom or sense of self. Torvald’s reaction in the end leads Nora to rearrange her priorities and put herself first. Her shift from being a submissive woman and toy who follows her husbands every wish to deciding to leave Torvald, even if it means leaving her children, shows an increase in independence and sense of self. Nora is finally free from Torvald’s restrictions, even though she had committed to them before. She now realizes she can exist outside Torvalds limiting world and be the free independent woman she was meant to be. As for Elisa, she sees herself differently from before. Instead of breaking from society’s rules, she accepts her boundaries and realizes that at the end of her life, nothing will change no matter how she feels.

She Can Wear Trousers Too. (2021, Dec 02). Retrieved from https://studymoose.com/she-can-wear-trousers-too-essay 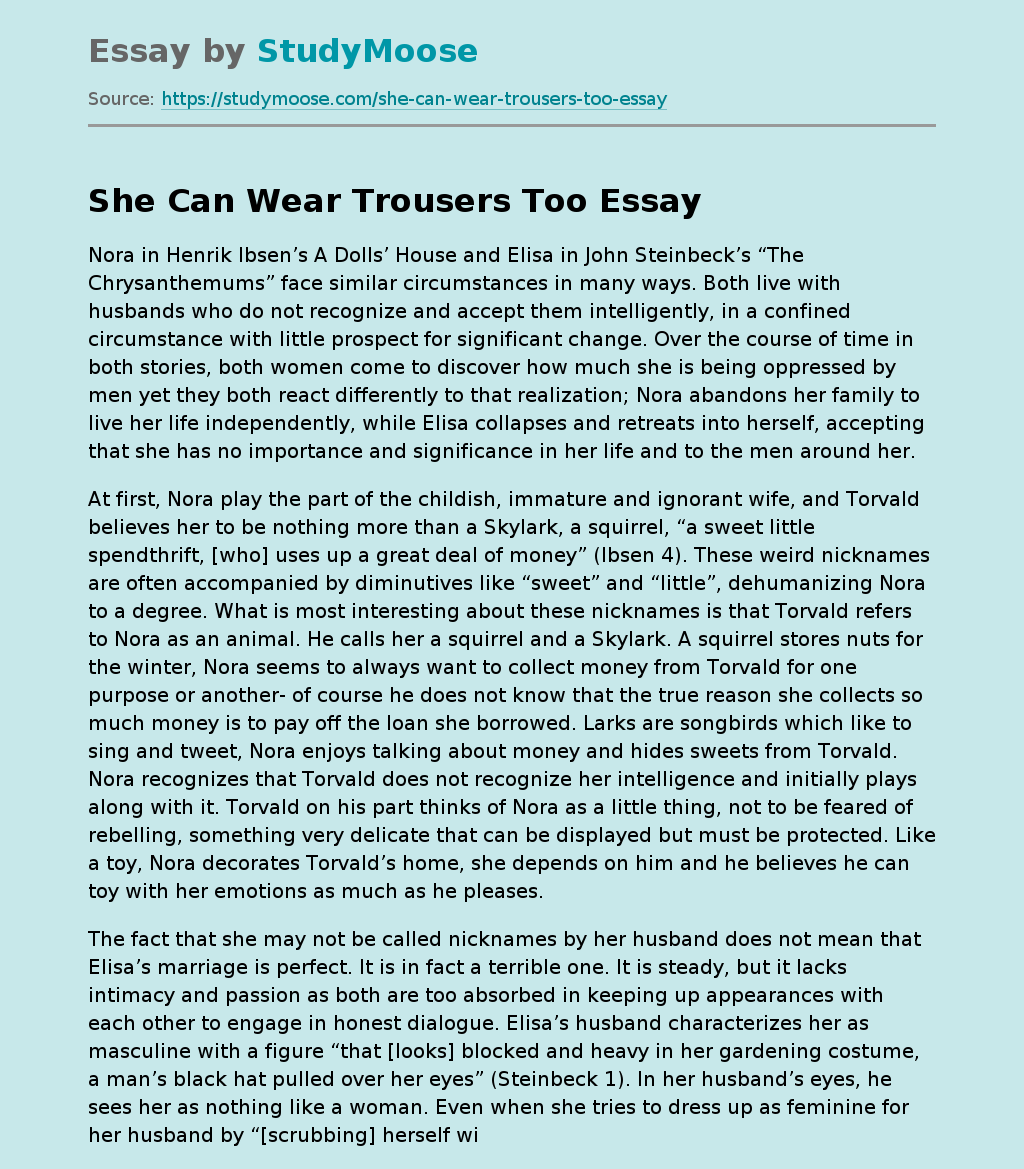