Shakespeare's dramatic irony in the play

Dramatic irony occurs throughout “Much Ado About Nothing” enabling the audience to know facts of which the characters in the play are ignorant. It is used in the play to create suspense, comedy and cause conflict between characters, thus making the play more entertaining while allowing the plot to intensify. The most notable uses of dramatic irony in the play are Hero’s “infidelity”, her death and the “duping” of Benedick and Beatrice.

The first notable use of dramatic irony occurs during the masked ball when both Benedick and Claudio believe they have tricked other people into believing they were someone else.

Don't use plagiarized sources. Get your custom essay on
“ Shakespeare’s dramatic irony in the play ”
Get custom paper
NEW! smart matching with writer

In the case of Benedick, he will not let Beatrice know who he really is, she asks, “Will you not tell me who you are?” he replies “not now”. Although of this it becomes clear to the audience that Beatrice knows it is Benedick behind the mask, as she continually ridicules him, yet he himself does not realise it.

Similarly, Don John tricks Claudio into believing that Don Pedro is actually wooing Hero for himself, when he is actually not. Although, the consequences of this are greater for Claudio is extremely gullible and jealous so he believes his friend has betrayed him. This leads to him confronting and accusing Don Pedro until he finds out that what he thought is not really true.

Hero’s supposed infidelity is another example of dramatic irony, as the audience knows that it is only a ploy by Don John to stop the wedding taking place.

This accusation leads to Hero being shamed at her wedding by Claudio and her “death”, “she dying – as it must be so maintained”. Here the Friar proposes faking Hero’s death when they learn that the accusation might not be true. The audience knows that Hero is not really dead and the only reason they have done this is to make Claudio feel guilty.

Shakespeare's dramatic irony in the play. (2016, Jul 22). Retrieved from https://studymoose.com/shakespeares-dramatic-irony-in-the-play-essay 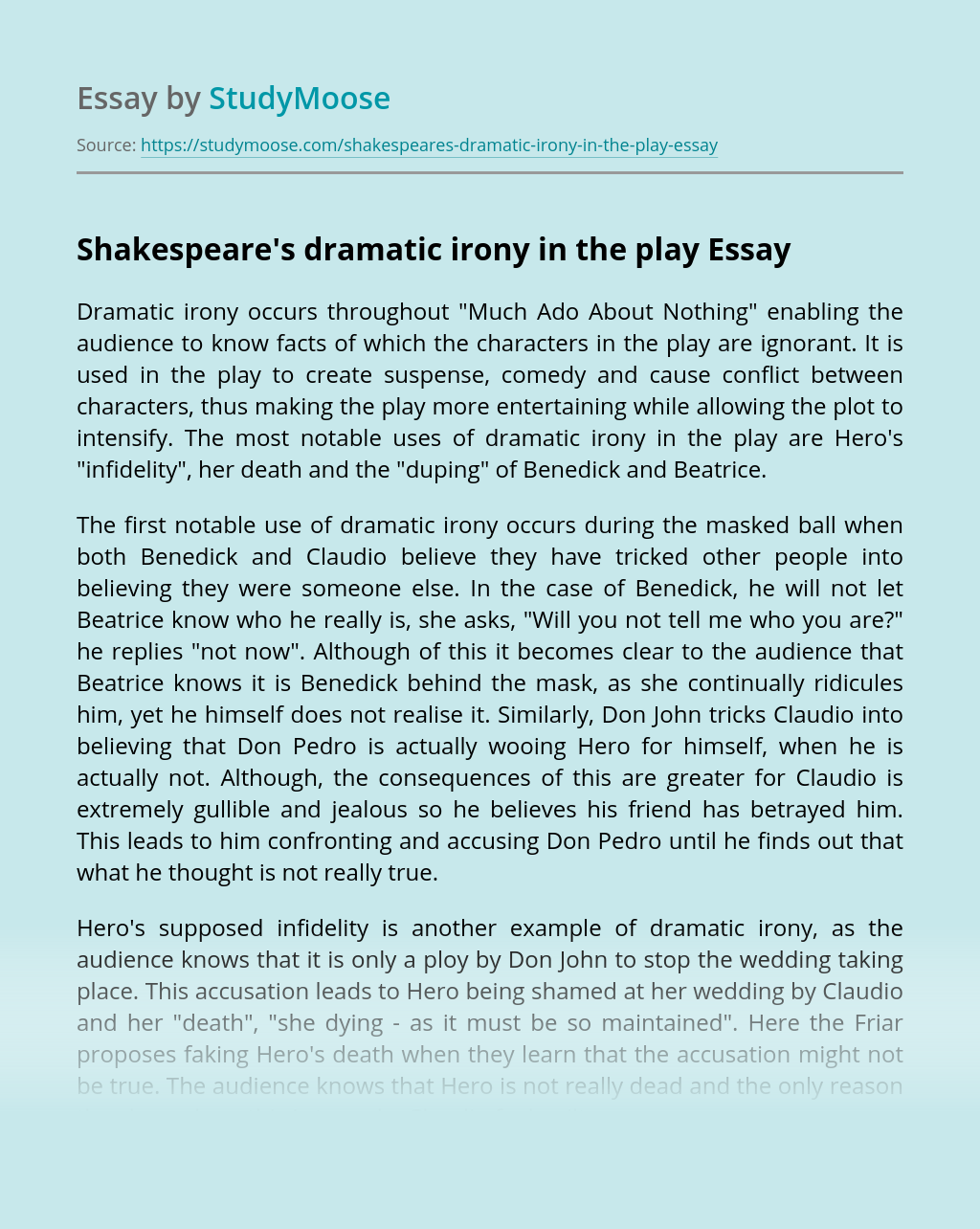