In Shakespeare’s Othello, the ideas of race, marriage and jealousy are explored at length. Through his work, Shakespeare criticizes popular notions and prejudices based on race. He reflects the prevalent racist ideas through the speeches of characters like Iago, Roderigo and Brabantio. By making his protagonist a Black man of higher birth and nobler qualities, reflected in his refined speech and manner, Shakespeare effectively breaks down stereotypes regarding colored people. Shakespeare uses the prejudices about Black men to characterize Iago instead.

Don't use plagiarized sources. Get your custom essay on
“ Shakespeare’s Desdemona ”
Get custom paper
NEW! smart matching with writer

For instance, the excessive lust that Black men were frequently accused of is almost completely absent from Othello’s love for Desdemona. It is Iago instead who comes across as being lecherous and coarse. Another stereotypical idea, that Black men were incapable of commanding respect, is overturned in the figures of Cassio and Desdemona who are loyally devoted to Othello. Iago starts out with warning Brabantio that his daughter, Desdemona, was infatuated with an “old black ram (Othello 1.

1. 111) Iago incites people to go against Othello by making racist comments but never does he say anything slanted to Othello directly. Shakespeare has portrayed Iago’s character as cunning and manipulative and even though Iago uses racist terms like “the Moor” (1. 1. 116) his hatred of Othello is not because of his color. Iago hates Othello with a vengeance because he was his superior in the army and had chosen Cassio to be his lieutenant and not Iago.

This made Iago feel slighted and overlooked and promised to avenge this insult by destroying Othello.

That he uses Desdemona and Cassio shows his vindictive and manipulative nature. Othello does have an underlying racist theme but that is not the central focal point of the play. Only a handful of characters make overt references to Othello’s color negatively. Roderigo calls Othello a “lascivious moor” (1. 1. 126) to inflame Brabantio against Othello, who he hates more as a show of solidarity with Iago than for any other reason.

No one in the play except Brabantio refers to Othello as “the Moor” or uses racist terms to his face, and Brabantio does that because he is upset with his daughter and for political reasons than for any deep racist prejudice. Desdemona’s maid-in-waiting, Emilia calls Othello “you the blacker devil” (5. 2. 131) out of despair when she comes to learn that Othello has killed her mistress. In writing Othello Shakespeare took a bold step by introducing a colored man as the hero of his play.

The society at that time was not as open as it is today and it was an audacious move to attribute gallant and noble qualities to a black man and portray a white man as the villain. The fact that Shakespeare chose the union of a black man with a white woman as the subject of his play shows that he did not approve of racism himself, though he did acknowledge that racist feelings were present in the society. The two notable marital relationships explored in Othello are of course, those of Desdemona and Othello on one hand, and Iago and Emilia on the other.

In Othello’s and Desdemona’s marriage there is mutual love and adoration: Othello dotes on his “gentle Desdemona” (1. 2. 25) and Desdemona in turn worships her husband. Yet, there marriage is not interpreted as being very intimate. Othello confides in Iago that although he loves Desdemona “I [Othello] would not my unhoused free condition/ Put into circumscription and confine/ For the sea’s worth” (1. 2. 26-28). This is a clear admission that Othello values his freedom and his desire for adventure more than domestic bliss.

Desdemona also makes a strange comment in Act 4, Scene 3 where she is getting ready for bed: “This Lodovico is a proper man” (4. 3. 35), she says. It is highly uncharacteristic of a devoted wife like Desdemona to suddenly make such flippant comments on another man, moments after she has been discussing her husband (Desdemona has just said: “He hath commanded me to go to bed, / And bade me to dismiss you. ”). Perhaps Shakespeare indicates that tired of her husband’s mistrust and jealousy, Desdemona too may have started to waver in her loyalties.

We never do get to find out where this leads as Desdemona is killed a scene later. Iago and Emilia too have a far from ideal marriage. Emilia is possibly the only character in the play who can see Iago for his true nature referring to him repeatedly with insults like “wayward husband” and so on. But we must remember that Emilia has a poor opinion of men in general: “They are all but stomachs, and we all but food; / They eat us hungerly, and when they are full, / They belch us” (3. 4. 103-106). ” This may explain why Emilia still wants to please Iago.

Why else does she show Iago Desdemona’s handkerchief and allow him to take it? Despite her mistrust of Iago in some respects, Emilia does not till the end of the play seriously doubt Iago. It is only when she Iago’s lie about where he got the handkerchief is revealed to her that she realizes the enormity of his evil nature. Iago is also extremely callous in his treatment of Emilia. He insults her, calls her a “common thing” (3. 3. 202) and even suspects her falsely of having an affair with Othello.

Both marriages therefore are not based on mutual love and respect at all. Even with the eloquent pledges of love that Desdemona and Othello exchange, their love is actually based on nothing concrete. While Iago and Emilia are both shrewd and practical but do not love or trust each other at all. Shakespeare uses Othello to make these cynical comments on marriage in general. Perhaps he wants to remind his audience of the importance of both trust and common sense in a relationship, in addition to love.

Iago has been the pivotal character of this play, important enough to have changed the entire course of the unfolding of the play, by his negative influence on Othello. However, giving Iago the credit for overshadowing Othello and wrecking his marriage with Desdemona is probably going too far. The fatal flaw was present in Othello. His gullibility and the inability to see through Iago’s scheme were as much responsible for the failure of his relationship with Desdemona as anything else.

Added to this was Othello’s weakness of being blindly jealous and not being able to rationalize the alleged behavior of Desdemona. He practically worshipped her and set her up on a pedestal from which she would have to fall if she were to live a normal human life. So if it were not for Iago there would have been any other person or agent to have fed his jealousy and brought about a similar if not identical outcome. Inter-racial marriages in the fifteenth-sixteenth centuries were very rare and did not have the sanction of the society of that period.

So the case of the union of a white Venetian woman, Desdemona and that of a black Moor, Othello, was more than unusual and though Shakespeare was himself unbiased and used a black man as his hero, the rest of the society of Venice was not that impartial. We see right from the beginning that Brabantio flew into a rage when he heard that his daughter was infatuated with a “moor”. So it would have been difficult for the marriage to have survived even without the evil instigation from Iago because of the inherent weaknesses in the characters of Desdemona and Othello and the pressure they would have to undergo from the society.

Emilia, who is gentle and kind and does not contradict Desdemona’s eulogy of Othello, falls back on her native prejudice and calls Othello a ”black devil” and a “dolt” when she hears of her mistresses death. Rodrigo is openly sarcastic and offensive about Othello’s color and the fact that Iago uses racist comments to turn people against Othello bears testimony to the fact that Othello would always have to walk on egg shells in order to maintain peace and keep to the right side of white people to be accepted whole-heartedly by the people.

Brabantio, Desdemona’s father was a senator and was placed above Othello in hierarchy of Venetian society. This was one of the reasons why he alone expressed contempt of Othello’s race and abused him publicly. He was shocked when he heard of Desdemona eloping with Othello and made a huge hue and cry about it. He considered his daughter dead to himself and the world and blamed Othello for using witchcraft to get his daughter’s affection. However, we are aware that it was he, Brabantio, who had been responsible for the meeting of Othello and Desdemona in the first place.

Brabantio was very fond of listening to Othello’s exotic stories of adventure and bravery and probably felt responsible to some extent for the eventual infatuation of Desdemona. Brabantio was extremely controlling of Desdemona’s life and everything she did. Desdemona may have felt rebellious and decided to elope with Othello to escape his tyranny. This may be another indicator to the fate of their marriage in the long run. ? Works Cited Garner, S. N. “Shakespeare’s Desdemona. ” Shakespeare Studies 9 (1976): 233-252. 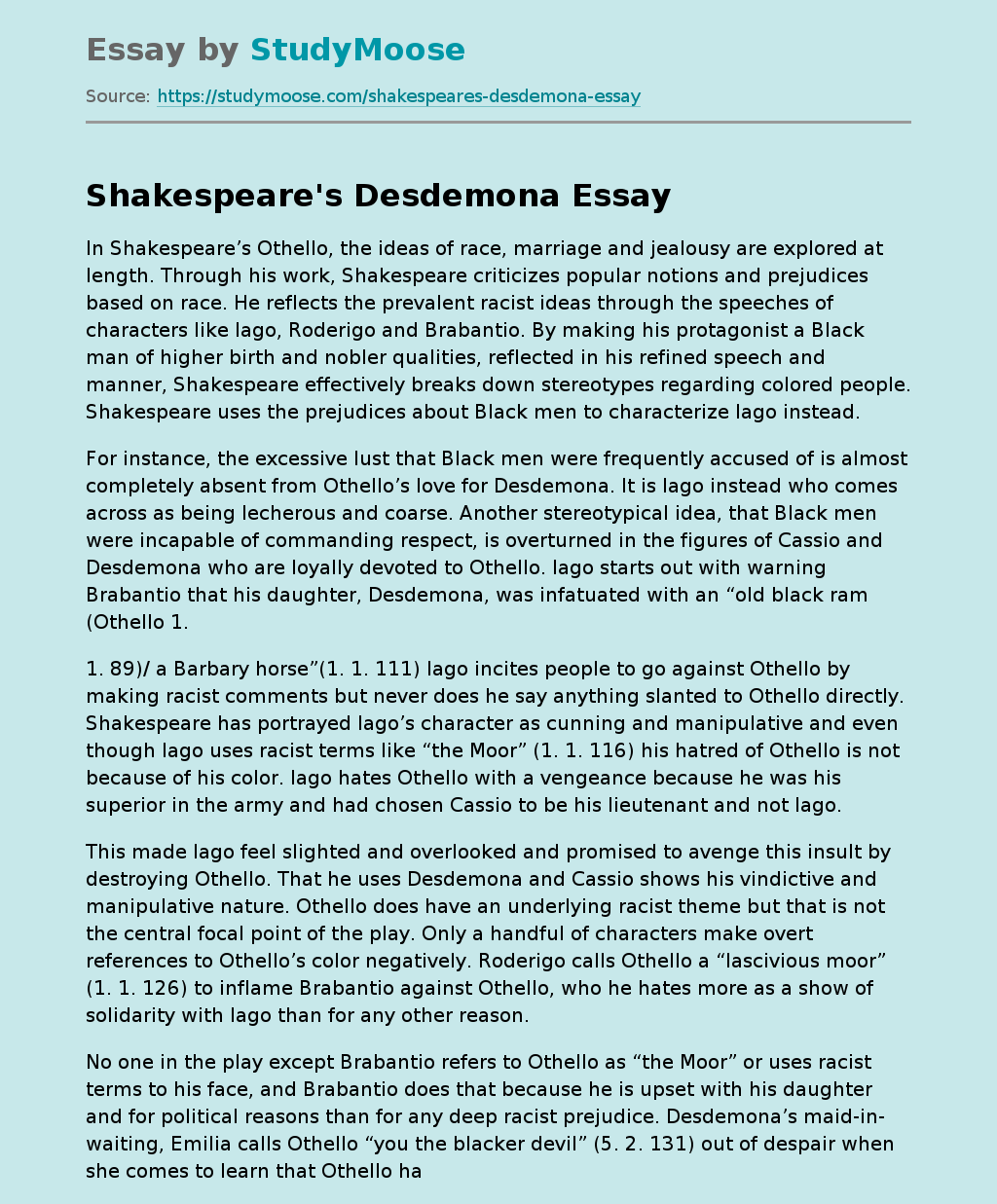