The poetic image of Desdemona is the eternal ideal of beauty and perfection, a symbol of loyalty and infinity of true love, courage and strength of the female spirit, and of illusions and hopes that never come true.  This is an actual presentation of the fate of a modern woman who is undergoing all stages of the spiritual crisis. The character of Desdemona was admired not only by the authors of literary works (Giovanni Chinanto, William Shakespeare) but also by the best composers of the early and late Romantic era (Giovanni Rossini, Giuseppe Verdi).

Don't use plagiarized sources. Get your custom essay on
“ Desdemona Character ”
Get custom paper
NEW! smart matching with writer

The Power of Love

Shakespearean Desdemona is a woman independent of the superstitions of her time; she chooses her husband and dares to break with her father and the Venetian society. The heroine is presented in dialogical scenes and one monologue from the final act. The first appearance of Desdemona in the tragedy happens in a tense situation with her father, which makes her publicly confirm her voluntary marriage and love to Othello.

The lovers talk about their feelings in the presence of the Senate, and this situation is the demonstration of the love line of the tragedy and the image of Desdemona in particular.

Brabantio, who does not understand how his well-bred, kind and obedient daughter could have fallen in love with the Moor, accuses Othello of witchcraft, but Desdemona really has a reason for her feeling. Listening to Othello’s stories about sea battles, she truly falls in love with him and agrees to a secret wedding despite the prohibitions of her father.

It is important for Desdemona to stay with her loved one, so she leaves with him to a remote garrison. Her beauty and pure intentions are envied by the helpers of the commander Othello, who believe he is not worthy of such a wife.

Artistic images of all the characters of the tragedy are vivid, clear and realistic. Both positive and negative features can be found in each of them. The purest heroine of the work is Desdemona; however, some researchers describe  her as the opposite. The first group of scholars says that the image of Desdemona is the image of an innocent victim. Accused of adultery by her husband, Desdemona tries to calm him down and assure him that she is innocent and never had betrayal on her mind. However, a jealous and quick-tempered Moor kills her. The image of pure and innocent Desdemona is symbolic. Her love was purer, stronger and more sublime than the love of the man who killed her because of a false and ridiculous slander. The image of a young beauty Desdemona is the embodiment of feminine fidelity, meekness, and tender love.

Nevertheless, according to another group of English literary critics, her character is not devoid of a tendency to deceit. She deceived her father at the moment when she left his house and ran into the arms of the Moor. She lied to Othello when she lost her handkerchief. She misled Emilia when she convinced her of being the murderess herself. The first deceit is conditioned by love, the second – by fear and reluctance to upset her beloved husband, the third – by an attempt to protect Othello. Meanwhile, Iago in his brutal game appeals to the first instance of deceit and convinces the Moor that if Desdemona can neglect the feelings of her parent, nothing will prevent her from doing the same with her husband.

An indirect assessment of the heroine happens at the beginning of the conversation between the negative characters of the play (Iago and Rodrigo) about the secret relationship of the couple. The first act that takes place in Venice reveals the love story of Othello and Desdemona, where the girl does the thing which is not allowed, acting against the will of her father. Respectively, it reveals courage and willpower. The second act takes place in Cyprus. Desdemona awaits the arrival of her husband, talks to Yago and Emilia, reflects on the upbringing and feminine beauty. A significant role is played by the third scene of this act, where Desdemona’s handkerchief gets an important function and becomes material evidence. The change in the image of Desdemona occurs in the fourth act; the heroine turns into a completely tragic character. 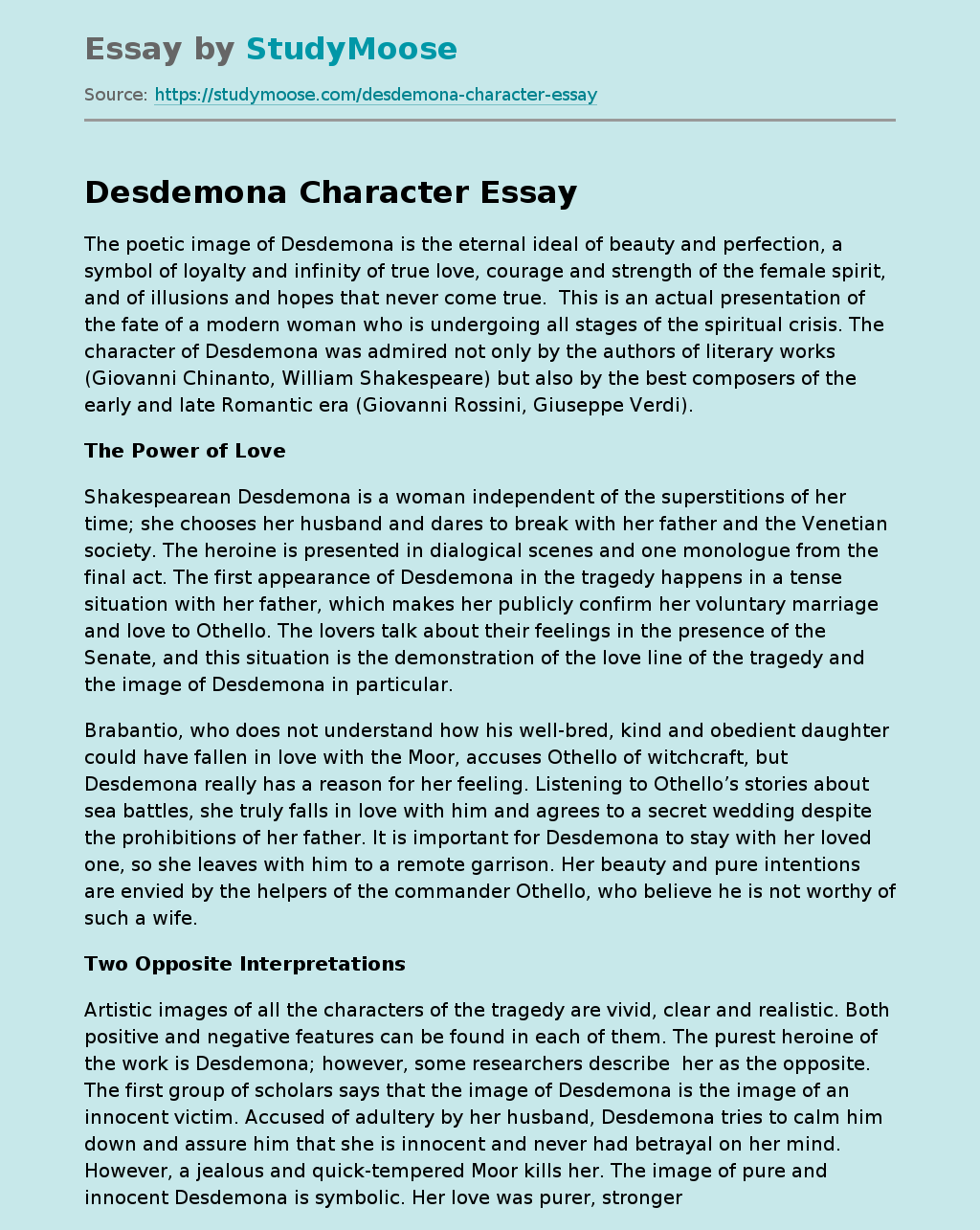