Rupert Goold, the famous director of the rendition of Shakespeare’s Macbeth manages to capture the hideous and undoubtedly the most successful horror adaptation of Macbeth. Goold sets up Macbeth’s events in the Post World War II world with his main character, Sir Patrick Stewart, to represent the cruel dictator Joseph Stalin, leader of The Soviet Union. Goold uses many literary devices such as symbolism, allusions, and allegory to portray Mr. Joseph Stalin through the strong, all mighty Macbeth. Before the comparison continues, let’s introduce Joseph Stalin.

Don't use plagiarized sources. Get your custom essay on
“ Shakespeare’s Macbeth in Interpretation of Rupert Goold ”
Get custom paper
NEW! smart matching with writer

“Joseph Stalin was a Soviet revolutionary and politician of Georgian ethnicity. He ruled the Soviet Union from the mid-1920s until his death in 1953, holding the titles of General Secretary of the Communist Party of the Soviet Union from 1922 to 1952 and the nation’s Premier from 1941 to 1953” at least according to the History.com Editors(2009). Joseph Stalin was the dictator of the Union of Soviet Socialist Republics from 1929 to 1953. Stalin is not someone we would consider “good”.

Stalin ruled by terror, and millions of his own citizens died throughout his brutal reign. Now he is coming to sound familiar to someone we know a huh?

Stalin was admired at the early starts of his reign by Vladimir Lenin, a Russian communist revolutionary, who was impressed by his “ruthless underground operator” (BBC, 2018). This admiration is seen through the king, Duncan. Macbeth was portrayed as a noble, honest and brave man. As said by the captain in the second scene, “For brave Macbeth – well he deserves that title” (I.

2.16). He admired Macbeth enough to reward him, Thane of Cawdor, after a civil war was won.

We are first introduced to Lady Macbeth. Yes, Stalin did have a wife, two actually. Lady Macbeth performed an unforgettable scene for us. ‘Come, you spirits, That tend on mortal thoughts, unsex me here, And fill me from the crown to the toe top-full Of direst cruelty! (1.5.38–43) Lady Macbeth has asked the spirits to relieve her of all the feminine weakness she obtains. She is preparing for all her evil-doing she has planned. She asked to be “unsex[ed]” so that her feminine natures do not cause her to feel guilt or remorse, she asked to be“fill[ed] from the crown to the toe top-full Of direst cruelty! (1.5.43) In this scene, Goold manages to fit both wives into the film. Stalin’s first wife he really loved dearly when she deceased due to health issues, Stalin states “[t]his creature softened my heart of stone. She died and with her died my last warm feelings for humanity” (BBC,2009) Stalin remarried, his second wife committed suicide due to Stalin’s mental and physical abuse. Google captures the first wife, full of love and joy before Lady Macbeth is unsexed. But after she is unsexed is where the second wife comes out to show. Although it is shown that Goold does not include the abuse, he manages to capture both, a loving and caring wife, and the women Lady Macbeth formed into after the unsexing happened, a very sad, depressed, paranoid, human being that decided to commit suicide to end her suffering. Although Stalin did not initially always have had the mindset of ultimate power, once just a bit of power was given to him, he was hungry for more.

He took the chance or opportunity to do so when he saw the weakened government after the war, and after the death of Vladimir Lenin, Lenin being the individual in charge of the Soviet Union. Stalin was capable of illumination anyone who threatened his throne, with no regret. Macbeth did show remorse for the actions he had committed but the cynical and emotionless Stalin was still portrayed through the film. There’s an unforgettable scene in which Macbeth is preparing a sandwich for himself while ordering the murder of his good friend Banquo. The quicksilver changes of mood that inflect Stewart’s delivery here suggest that even in full, cold-blooded command, there’s a voice rasping in Macbeth’s ear, feeding his unstoppable fears. The thirst for power is easily seen and shown throughout the film. Goold utilizes the witches as the primary source that enriched Macbeth’s hunger for power throughout the film. “ All hail, Macbeth, thou shalt be king hereafter![…] Thou shalt get kings, though thou be none. So all hail, Macbeth” (1.3.53;70-71). Macbeth seeks for more of the prophecy this symbolizes Stalin’s thirst for power. Even though both had someone in their way to ultimate power, only Macbeth took it upon himself to eliminate the obstacle, (obstacle being Duncan). Lenin died from a stroke. But once that first obstacle was out of the picture both were capable of anything to obtain ultimate power.

Macbeth killing Duncan, Banquo and sending many more people to kill all those who oppose him. These actions are parallel to Stalin. He put his new role of General Secretary to use when he removed thousands of Leon track supporters.“Leon Trotsky to be Lenin’s natural successor, but his ideas are too idealistic for the majority of the Communist Party.”(BBC, 2009) Trotsky was not a fan of Stalin’s plans and criticized them very much. In which after he has Trotsky exiled. Banquo was sent to be killed soon after he told Macbeth that he knew what he has done.“ Our fears in Banquo Stick deep and his royalty of nature Reigns that which would be feared.”(2.1.42) Both Trotsky and Banquo were stabbed and murdered because they promoted as a threat to Macbeth and Stalin’s reign. Goolden utilities Banquo to portray Stalin’s cold heart and capability of anything if it threatened his trainf. Paranoia strikes. After Macbeth’s first act of true evil, killing the king, a friend, he feels tremendous guilt. Goold expresses this when he sees Duncan over the table drenched in blood. But he obsesses over the witches prophecy, becomes unable to sleep, and murders many more throughout his reign of terror. Stalin enacted the great purge out of fear of losing power. He had many opponents of his party removed, even having past members critical to him executed. The last stage of the purge was to get all those who knew too much of the purge all killed. Some of the Stalinist-purge imagery is brutally effective, as the public assassination of Banquo. Goold and Stewart make it clear that Macbeth is really killed not by Macduff but by his own willingness to be killed. It’s suicide by nihilism. Macbeth’s death is used as a symbol to represent the endings of Stalin’s reign. 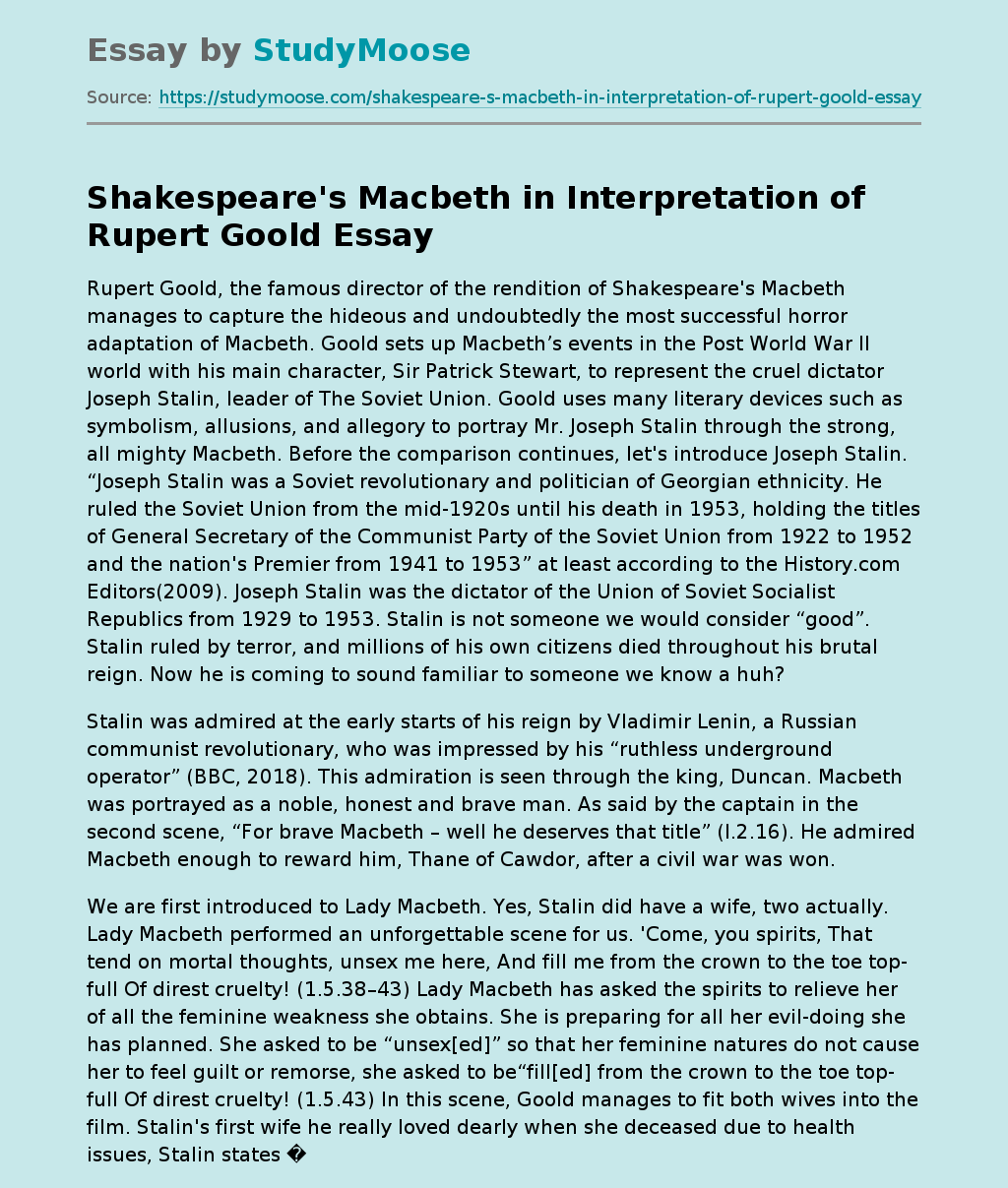