A “strumpet” and her “fool”. Shakespeare’s Antony and Cleopatra are too sordid as characters to ever achieve genuine tragedy- discuss. Antony and Cleopatra’s behaviour at intervals in the play do make her appear a “strumpet” and he her “fool”. However, to solely condemn then as such fails to recognise the other qualities they possess as world leaders. They are judged initially for their inability to recognise the duty they have to their subjects. Their all-consuming passion is viewed as self-gratifying, fulfilling their needs to the destruction of others.

Don't use plagiarized sources. Get your custom essay on
“ Shakespeare and Cleopatra ”
Get custom paper
NEW! smart matching with writer

The audience could view Cleopatra in two ways. As a strong heroin, a Royal Queen, fighting for her own political and literal survival by any means open to her yet at the same time insecure about her all-consuming love for a man she cannot fully possess. Furthermore it is arguably that she is a manipulative, irrational woman who is often disloyal to Antony, a femme fatale who brings about his downfall.

Cleopatra does have some heroic qualities but her behaviour at the beginning of the play overshadows these initially. “If you find him sad, say I am dancing;

If in mirth, report I am sudden sick” – Cleopatra Her past history is notorious as the role of mistress is commonplace, she is seen as being incapable of capturing a man who is free, her life is littered with illegitimate children, she is not virtuous, a hero is morally sound and she is weak. As soon as the play opens we learn of her adulterous relationship with Antony, which, together with her past history, immediately opens her to criticism.

In the opening lines Philo says Antony is a tool “to cool a gypsies lust”, Antony is just another man for a “strumpet”.

This criticism occurs throughout the play, by Philo in the beginning of the play- moulding the audiences initial impression of her when he calls her a “gypsy” and a “strumpet”, she is condemned by Caesar- the all-powerful conqueror throughout the text when he accuses her of not being “strong” and even by Antony- the one man who the audience thought would never turn on her, “my sword, made weak by my affection”. This awareness of others of her adulterous habits allows her public role as a queen to be overshadowed by her private life.

It is in the spotlight therefore she is being judged because she is unable to distinguish her duties from her love for Antony. As a result of these public acknowledgements of her affairs with married men, she is viewed as a “strumpet”. The role as mistress suggests a lack of morals and the fact that she allows her man to marry a second time and still stays with him reinforces the idea of her having a lack of morals. Cleopatra is also portrayed as power hungry as she is only sexually attracted to people in power***, again showing her lack of morals.

She is shown in the play to have her own power, which could suggest some heroic qualities, but this power does not lie in her bravery, in her being a great queen but in her female sexuality, her ability to capture great men with her looks and seductive qualities. *** Even in Fulvia’s death, the woman who had been destroyed by Antony and Cleopatra’s love for one another, Cleopatra shows how egotistical and insecure she is, “I see, in Fulvia’s death How mine received shall be” She reflects on her own situation, showing how self-absorbed she is. She then shows her vanity by comparing herself to Fulvia.

However all of this could be attributed to her jealousy, which reflects the extent of her love for Antony. Cleopatra also shows herself to be very temperamental in the play. Her emotions overshadow her behaviour as Queen, which affects others. Her emotional and often immature outbursts make her appear childish and as a result it becomes difficult to view her as a heroic figure. This is shown when the messenger brings her the news of Antony’s marriage with Octavia and Cleopatra takes her anger out on the messenger: “the gods confound thee! Doat thou hold there still? ”

she plays adolescent games, lacking dignity, showing her to be a “strumpet”. However, at points in the play she does show herself to be more mature than Antony when in the beginning the messenger arrives Antony refuses to see him. He deals with the situation by trying to ignore its existence, she in contrast demands him of his duty. Cleopatra’s relationship with her servants appears almost peerless, she speaks to them as if they were her peers “You do not hold the method to Enforce the like from him” -Charmian Charmian says this to Cleopatra. She is the Queen of Egypt and Charmian is a mere subject.

She allows her subjects to condemn her actions, showing that she does not command respect. It is arguable that the situation between her and Antony is so apparently embarrassing that her subjects have no alternative but to tell her so. The point when Cleopatra really shows her strength of character is when she supports Antony during his downfall. Even Antony couldn’t cope, but Cleopatra continued in the face of possible death. *** By the time the audience reaches act four, Cleopatra is a changed character, she no longer reacts to Anotony’s jibes. 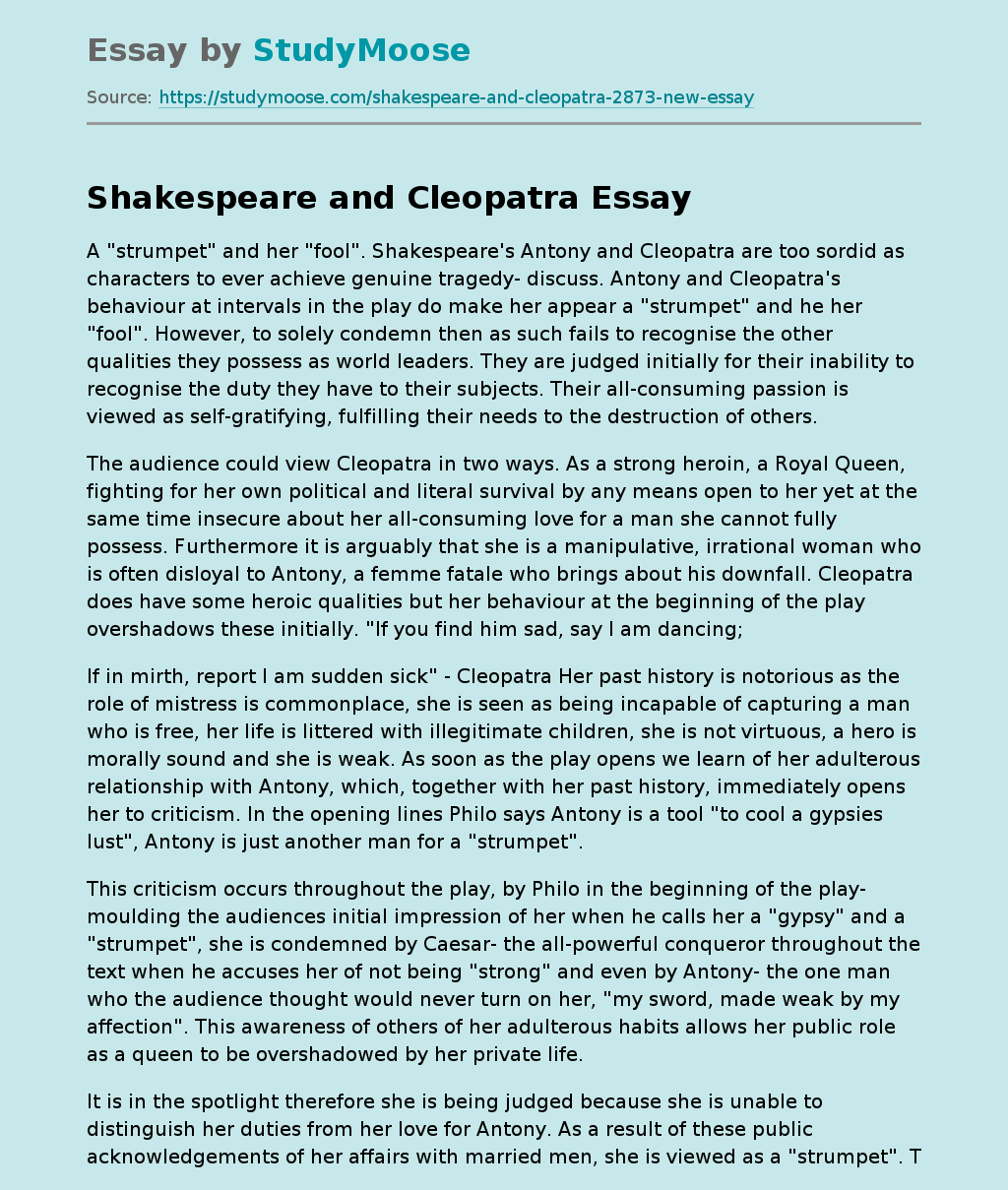