However, as Act 1 progresses, arguments between the pair become much more frequent and it becomes obvious their relationship is not always a happy one. The topic of Antony’s wife, Fulvia, causes much disruption between the pair, and following news of her death in Scene 2, Cleopatra still finds it hard to believe that Antony truly loves her, and is slightly hostile toward him. At one point she says “O, my oblivion is a very Antony”, suggesting she is extremely insecure.

Examples of this throughout the act suggest that Cleopatra is very fragile, especially when Antony is concerned.

Don't use plagiarized sources. Get your custom essay on
“ Shakespeares Antony and Cleopatra ”
Get custom paper
NEW! smart matching with writer

Antony’s behaviour suggests he is a very unsure person, who is constantly two-minded about what he should be doing. Part of the reason for this is his split in loyalty; he would ask himself the question of where his priority lies, with Cleopatra, the woman he says he loves, or with his Pietus, his loyalty to Rome. The split is revealed during his oxymoron, after he hears of Fulvia’s death during Scene 2, in which he states “I must from this enchanting queen break off”, showing that while he never shows it to the other characters, he does feel a need to fulfil his duty in Rome.

Both Antony and Cleopatra’s relationship with other characters in Act 1 give an insight into their personalities and lives. Cleopatra will go from being nice to her servants and eunuchs to being cruel to them in an extremely quick transition. Whereas Antony will not tend to engage in conversation with any of the Egyptian servants, but will however acknowledge Enobarbus (a Roman) a lot, perhaps showing his mind is still at Rome after all.

Cleopatra shows a minor friendship for her servants when she confides in them once Antony has left, in Scene 5, however she shows her spiteful side when she bullies Mardian because he is sexually inactive, she says “I take no pleasure in aught a Eunuch has”, meaning she isn’t interested in him because he has been castrated, a particularly cruel attack. The fact that sometimes Cleopatra is nice to her companions and sometimes isn’t is a sign that she has a very split personality, often depending on Antony’s whereabouts and actions, for example, when Antony is on scene with her, she will act uninterested and an argument will frequently ensue, but when he is not there, Cleopatra changes completely, almost talking as though she is level with her female servants like Charmian.

Antony rarely engages in conversation with any character other than Cleopatra or Enobarbus, although he will speak to messengers in order to get news from Rome, his true home, a signal that his Pietus and leadership are still very much present in his mind, a fact he never admits to Cleopatra, possibly because of her dominance over him. Antony’s failure to communicate with Cleopatra’s servants and eunuchs suggest that he does not wish to appear disloyal to Rome. Also, the fact that the first person he confides in upon hearing of Fulvia’s death is Enobarbus, showing he feels he can relate to people of Roman society more than Egyptian society. Antony’s relationships with other people indicate that he is torn between his love for Rome and Cleopatra, because when Cleopatra is around he will deny interest in Rome, but when she is not Antony appears to feel to return home to Rome in order to aid the triumvirate, (the group of Lepidus, Octavius Caesar and Marc Antony).

A year prior to the production of this play to the Shakespearean audience, Shakespeare’s Julius Caesar was a popular play, and is a tale of Julius Caesars murder, and the upcoming of Marc Antony and the rest of the triumvirate in waging war against Brutus and Cassius, who vanquished Caesar. The audience were likely to have seen this play, and Antony’s role in it.

The Antony presented in the “Antony and Cleopatra” is very different to the Antony portrayed in “Julius Caesar”, the bold, strong soldier seen in “Julius Caesar” has been tamed by Cleopatra which gives the audience the impression that Cleopatra is a very powerful woman, and Antony is not quite as immaculate as previously portrayed. However, when Cleopatra is not present and Antony hears of the attacks by Menas and Pompey, he shows shadows of how he was portrayed in “Julius Caesar”, for example he says “To such whose place is under us, requires our quick remove from hence” to Enobarbus, signalling that they must get to Rome quickly in order to support the Triumvirate, a huge contrast to how Antony acted in the previous scene (Scene 1) where he appeared tame in Cleopatra’s presence.

The opinions of other characters do a lot to shape how Antony and Cleopatra are presented. Many comments are made about them, some positive some detrimental, which could be because both Antony and Cleopatra act differently to different people. For example, at the start of the Play, Philo calls Cleopatra a “gipsy”, this could purely be because of how Antony has turned his back on the triumvirate to be with Cleopatra. However, Cleopatra’s servants are often very gracious toward her, with quotes like “gracious madam”, which is another sign of the friendship between Cleopatra and her servants. When Lepidus and Octavius discuss Antony’s abandonment of Rome, they describe him as both good and bad. Not only does Octavius describe him as a “great competitor”, he also states that Antony is a “rebel”.

There seems to be a difference in the characters, used to portray the difference in the lovers’ cultures. While Cleopatra is portrayed as a creative but laid-back woman, who puts love first, to represent Egyptian society, Antony is very much a serious man who will take what Cleopatra says to heart, and will contemplate serious news such as the invasion by Pompey and Fulvia’s death. This presents the difference between what was then a serious Roman Empire ruled by Military and a relaxed Egyptian kingdom ruled by Culture. 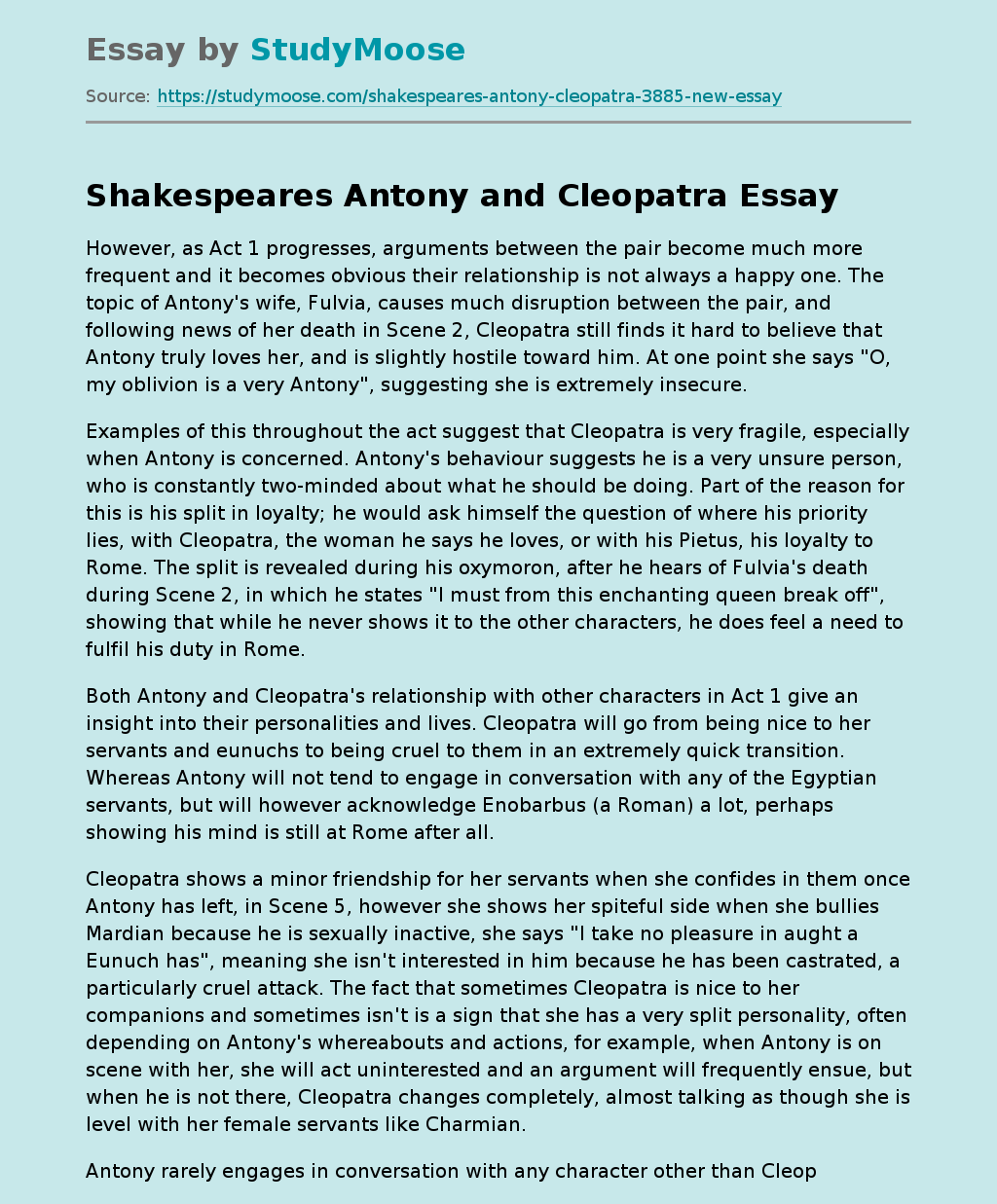