Love Between Antony and Cleopatra's

Antony and Cleopatra’s relationship involves much manipulation like the politics of empire. Cleopatra asks him, ‘if it be love, tell me how much’. She also tells a messenger that when he sees Antony ‘If you find him sad, /Say I am dancing; if in mirth report /That I am sudden sick’. Love is often used as a political tool. Cleopatra engineered a relationship with Julius Caesar to advance her own power.

Don't use plagiarized sources. Get your custom essay on
“ Love Between Antony and Cleopatra’s ”
Get custom paper
NEW! smart matching with writer

The audience are also shown later that Cleopatra needs Antony too, to maintain her own power. In addition, the marriage of Octavia Caesar to Mark Antony was obvious political manoeuvring by both Antony and Caesar, upon Agrippa’s suggestion that it would ‘hold [them] in perpetual amity’ and ‘make [them] brothers’. Furthermore, love is not just a political tool, it resembles politics itself. As with empire, love comes with it the possibility of betrayal.

Antony talks about ‘this foul Egyptian [who] hath betrayed [him]’, after Cleopatra turns her fleet around, failing to continue into battle beside Mark Antony, despite having convinced him, against the judgement of his fellow soldiers, that to fight at sea would be more successful than battle on land.

Moreover, Cleopatra claims that Antony’s ‘mouth-made vows’ ‘break themselves in swearing’ suggesting that she cannot trust anything he says. Additionally, Antony and Cleopatra use the language of possession to describe their love.

Cleopatra asks for ‘[her] angle’ in order to go fishing. She says she will think of every fish she catches as Antony ‘[a]nd say, ‘Aha! You’re caught.

” The couple use the same language to talk of their love as with Empire, two seemingly different subjects. Power politics is inherent to the love relations between the two protagonists. Cleopatra claims that she has ‘no power upon [Antony]’ but following Cleopatra’s betrayal in the battle at sea, Antony claims that his ‘heart was to [her] rudder tied by th’strings’.

Cleopatra says that ‘[she]’ll have’ ‘Herod’s head’ but without Antony there, wonders how she ‘might command it. ‘ She feels powerless because Mark Antony has married Octavia. She uses the language of empire but is transposed to love. Politics is such an integral part of Antony and Cleopatra’s relationship that the couple recognise it themselves. Cleopatra describes how she ‘wore his sword Philippan’ when they were drunk and Antony had fallen asleep.

The sword is a phallic symbol and through Cleopatra’s removal of it, there is the suggestion that she is emasculating him and removing his power. She also dresses him in her clothes, emasculating him further. Cleopatra enjoys exercising power over Antony who is in control of at least a third of the world. Moreover, this scene occurs very soon after Cleopatra’s description of Antony as the fishes she intends to catch, thus further emphasising her want for power.

Due to the close relationship between both love and Empire throughout the play, it is difficult to assess which is ‘essentially’ the more important theme. Clearly though, love is a major theme within the play, and is certainly no less important than Empire. At the end of the play, Caesar and thus, Empire, are triumphant because of his rationality. Despite the similarity of the two major themes, love is, perhaps, the resounding theme in that it is the theme that leaves the audience with the greatest sense of satisfaction.

Love Between Antony and Cleopatra's. (2020, Jun 01). Retrieved from http://studymoose.com/love-between-antony-and-cleopatras-essay 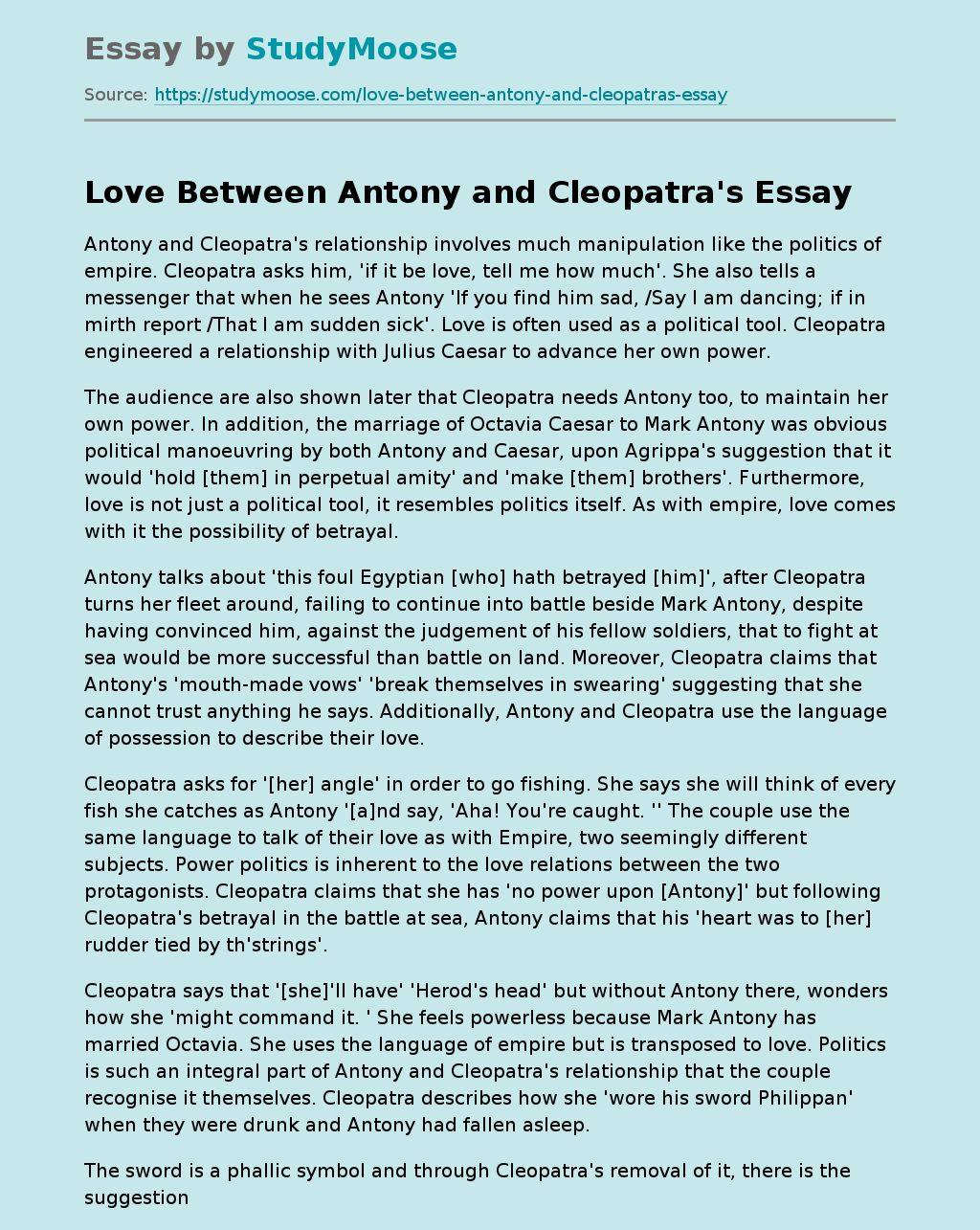