The Seven Ages of Man” is a dramatic monologue in William Shakespeare’s play “As you Like it.” The monologue is addressed by Jacques who has a gloomy look on life. This poem reveals to the reader the seven stages that a man plays throughout his life. It starts from a baby puking and whining, and ends with a dead man who has lost everything.

The success of this piece relies to a great degree on the extended metaphor because it relates our roles in life to acts on a stage.

Turn in your highest-quality paper
Get a qualified writer to help you with
“ Seven Ages of Man analysis ”
Get high-quality paper
NEW! AI matching with writers

Poetic devices also further enhanced the effect of the monologue. Jacques was addressing to the audience that man is born weak then becomes strong and then weak again which is a poetic device of parallelism. The power of the extended metaphor can be seen very clearly because it significantly enhances the poem.

The most distinctive aspect of this poem is the use of the extended metaphor. Shakespeare created an interesting effect through the metaphor because most people at first wouldn’t think of relating stage production to the world because they like they have nothing in common, but Shakespeare’s reveals to the audience that the world and stage production go hand in hand.

Jacques addresses the idea of the stage in the beginning, and then relates it to the world by stating the seven ages of man.

This functions as an extended metaphor because the relationship between theatre and the world is elaborated to the seven ages. The first sentence that Jacques states is, “All the world’s a stage, and all men and women merely players.

” This can be interpreted that everyone in the world has a role to play just like how actors on stage all contribute to the play. An extended metaphor is a type of figurative language that creates an image in the reader’s mind because of the comparison the poem draws verbally.

This poem creates a strong image for each of the seven stages due to Jacques choice of words like, “woeful, whining, sans everything,” which produce a vivid image in the reader because the words are little details of the object being described.

This work is also successful due to the poetic devices that Shakespeare incorporates throughout the poem. The monologue involves an appealing iambic structure called iambic pentameter. This structure is very close to human speech which enhances the effect of the poem because the reader is able to read the monologue easily making the poem appealing.

The poem is appealing to read, but the speaker of the monologue isn’t. Shakespeare’s speaker has a gloomy, dark look on life making the mood of the speech sad and dark. Jacques utters the phrase, “Men and women merely players,” in the poem, and his choice of words reveal the gloomy feel. Jacques uses the world merely making it seem like men and women are barely anything, and they don’t have much importance. Perhaps a sad feeling would occur in a reader because he would think that mankind has no importance to the world.

Also poetic devices such as alliteration and similes attribute to the gloomy mood of the poem. Shakespeare uses alliteration numerous times like, “quick in quarrel, plays his part, and shrunk shank.” The use of alliteration directs the reader’s attention to the tone and mood of the speaker allowing the reader to infer that the mood is gloomy because unique sounds give certain feelings. Another poetic device Shakespeare uses is simile when describing the ages of man.

Notably, this piece of work is successful because the author provides hidden aspects in the poem. One can interpret that Shakespeare thought that life was complicated, but simple at the same time. The poem has a complicated side to it because Jacques speaks about the various ages of man, and how each age has its own characteristics and priorities. The simple side is suggested when Jacques says, “They have their exits and entrances,” which clearly shows the reader that people are born and people die due to their pre-determined exits and entrances. Shakespeare was successful in using both complexity and simplicity together because many people’s lives follow that pattern, and Shakespeare cleverly combined them both. The overall theme in the monologue is the acceptance of change to our pre-determined paths in life. Jacques addresses the issue of change in a man’s life, and how their priorities and personalities change. At first, man is concerned about nothing which then changes over to love, money, reputation, and honor in that order. One can now understand how powerful this poem really is from all the poetic devices and extended metaphor.

The “Seven Ages of Man” involves many poetic devices which makes the monologue very successful and powerful. The speech demonstrates the idea of stage production being hand in hand to the world.

The monologue is compelling to read because the power it has to the reader is strong because the metaphor of humans playing their roles as actors can be easily connected by the reader. The reader is a human meaning he can compare himself to the seven stages. Jacques raises some debatable questions throughout the poem because the dramatic monologue deals with life, and our sense of control over what happens. As noted above, the gloomy theme, a question would rise of whether the “play” we are in right now is “written” poorly or not. Jacques feels the play is written poorly, but others might object to that because they believe that the play is only written by them, and only they judge if the play is right or not. 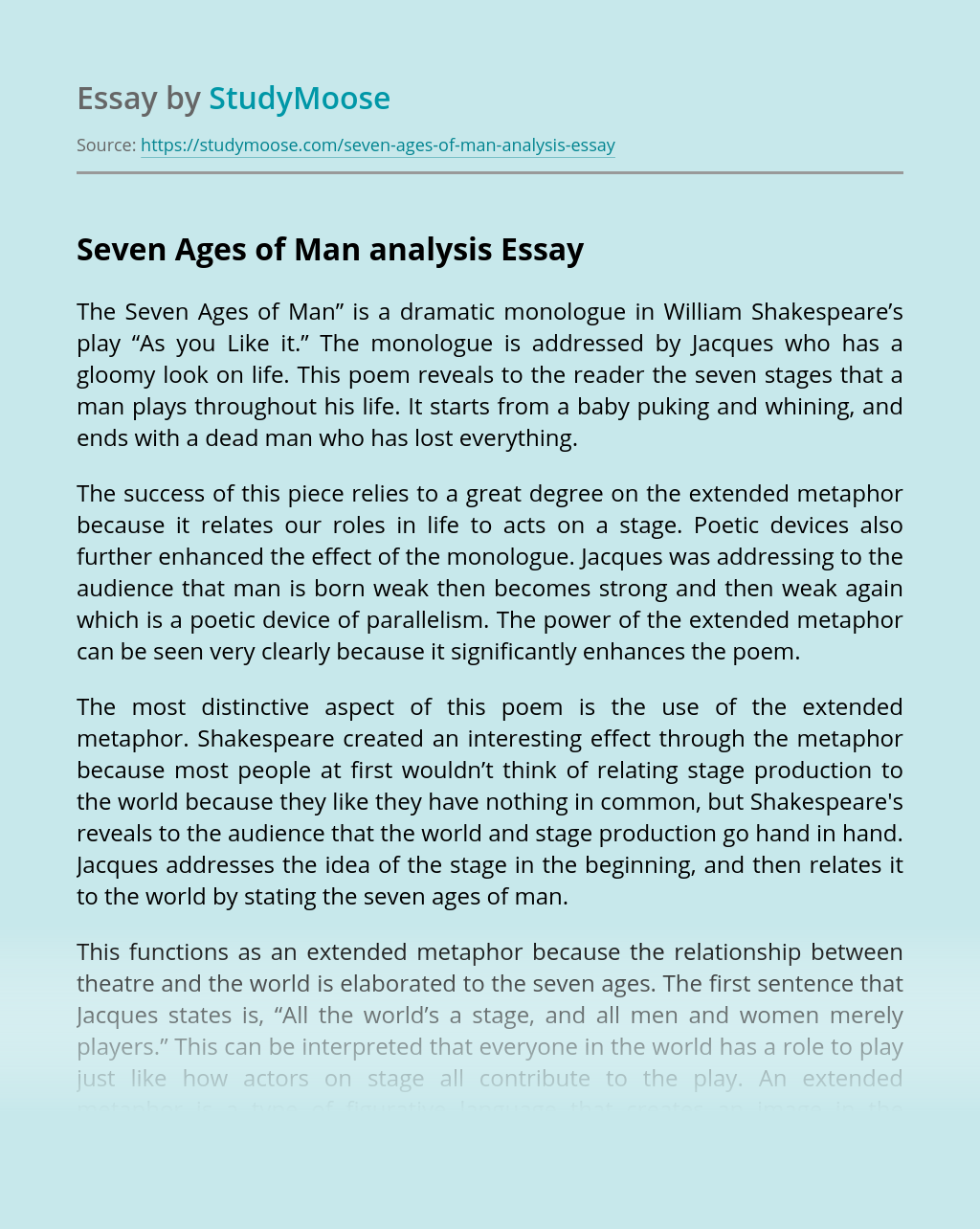 Turn in your highest-quality paper
Get a qualified writer to help you with
“ Seven Ages of Man analysis ”
Get high-quality paper
Helping students since 2015
Stay Safe, Stay Original