“The Seven Ages of Man”

William Shakespeare is the greatest dramatist of English literature. His superiority as a poet lies in his trendy poem “The Seven Ages of Man. ” In this poem, Jaques, the narrator, compares life to a huge stage where all of us are mere actors. Each person has an entry to the world at birth and exits at death, living only seven acts. Jaques portrays these seven acts by applying stylistic devices such as diction and figurative language to provide detail. Jaques commences with a metaphor that projects the significance of the poem: “All the world’s a stage and all the men and women merely players.

Turn in your highest-quality paper
Get a qualified writer to help you with
“ “The Seven Ages of Man” ”
Get high-quality paper
NEW! AI matching with writers

”This simply suggests life is but a theatrical performance. The poem now proceeds to the first and foremost act, the stage of infancy, where man makes his presence felt by crying at the top of his voice and vomiting any food or drink that is repulsive, in the nursing arms of his mother. This stage is relevant to every human being.

The second stage is the ‘whining’ schoolboy where he learns to utter a plaintive, high-pitched sound, as in fear, supplication, or complaint. The boy’s reluctance is emphasized by the selected simile: ”Creeping like a snail.

”After this stage he reaches his early youth, the peak of love and high romance. In this stage he sighs like a burning furnace and sings the sad ballads of romance full of woe to impress his lover’s heart. The impression of her reply can be seen in her eyebrows.

In the next role the adolescent is now a soldier (a grown man) with a life full of obligations, commitments, oaths, and vows. His beard is like a leopard’s whiskers. He endlessly fights for his honor, a full presence of mind which is sudden and quick in quarrel; sudden in disagreement and ready to defend.

The fifth stage is the adult-hood where a man tries to live a fair and justified life (the justice). He is “in fair round belly with good capon lin’d,” proverbially meaning the man is bribed. His eyes are severe with seriousness and his beard is leveled to a formal cut, which symbolizes his maturity. He is to take a lot of correct decisions to keep up with the ever-changing times. So this stage is the most robust stage in life. The sixth stage is the middle-aged. The man now prepares himself for the next level in life- old age. This man looks like a buffoon and an old fool in rugged old slippers.

His legs begin to shrink and he becomes more and more immobile. The man’s once bold adult-voice begins to descend to the lower high-pitched voice he carried as a child. The last stage is the old-age where he enters his second childhood. This stage explores an interesting aspect of life: As we grow older, we come closer and closer to what we first started from. It is also the stage of oblivion; the stage of being completely forgotten; the stage of being of forgetting or of being oblivious. He is without everything; without teeth, eyes and taste.

Finally, we lose all consciousness, going back to the state when we were just a single cell, with no capacity for senses. The actor’s part in the play has concluded. Shakespeare was not only a great poet but also a great actor and this view of the world as a stage and human beings as actors comes from a man who dedicated his life to theater. The world is but a global stage and all men and women presented here are puppets in the hands of destiny. Just like infrastructures on a stage, the world has its own entrances and exits. Every man in his life-time has parts to play. His acts are the seven ages. 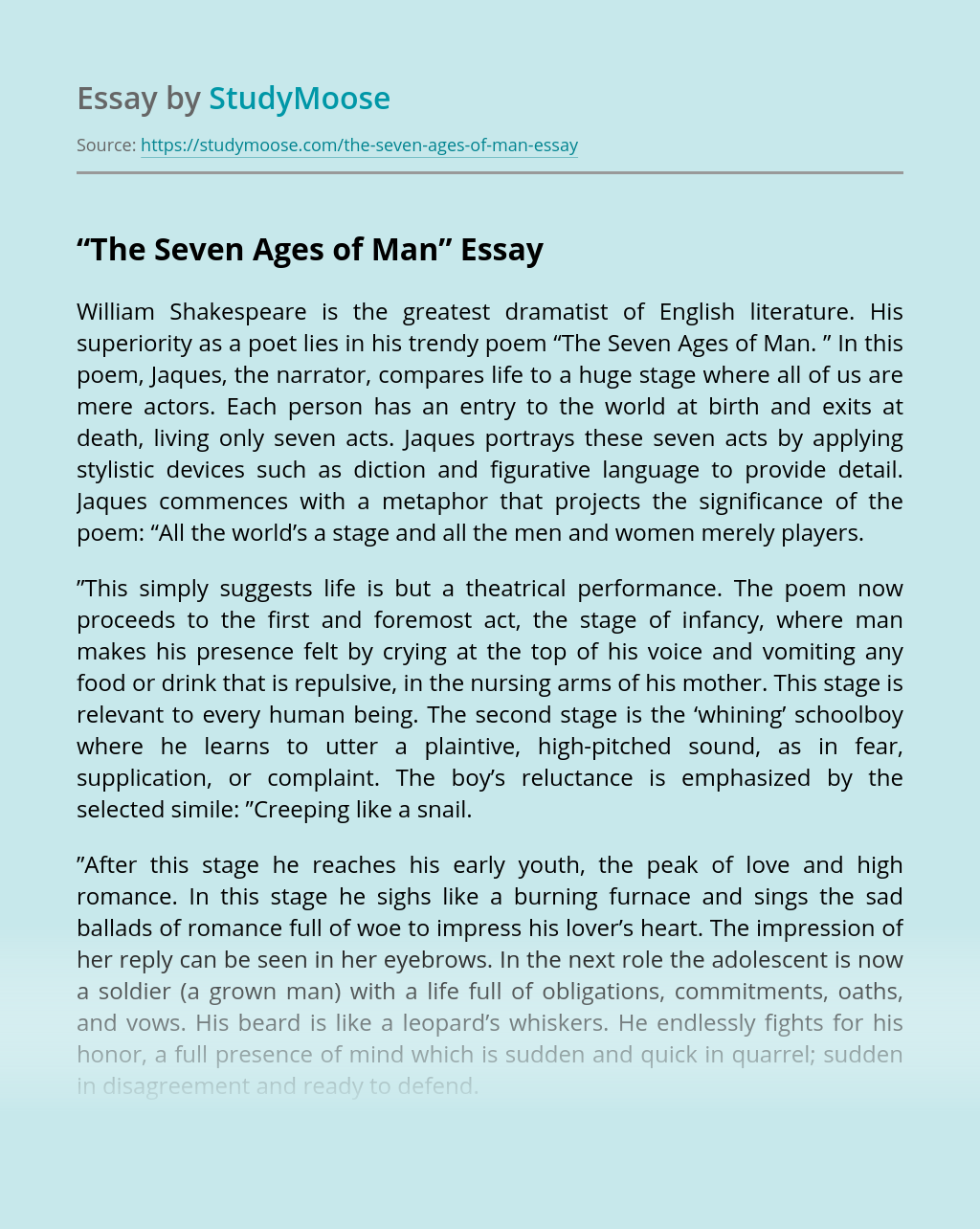 Turn in your highest-quality paper
Get a qualified writer to help you with
“ “The Seven Ages of Man” ”
Get high-quality paper
Helping students since 2015
Stay Safe, Stay Original