Serial killers may live seemingly average lives, but they are con men/women. Their childhood, mental disorders, and social standing affect the very aspect of who they are. Serial killers may seem to live normal lives, but behind their mask is true evil lurking in the shadows. Serial killers come from all walks of life. Anyone could be living next door to one or across the country. Their brains usually are not the same as a “normal” persons brain is. Serial killers are extremely intelligent.

Research on the thoughts and motives of serial killers is beginning to be done to understand, and possibly find ways to intervene in the future.

A serial killer’s childhood may play a key role in their mindset as to what drives a person to do the unthinkable act of murder. Research shows the earlier a child is exposed to abuse and violence the more likely they are to becoming desensitized to emotions that others feel (“The Link between Animal Cruelty and Violence towards People”).

Most of all, the serial killers studied reported abuse in some form as a child. This is not to say all abused people become criminals. Abuse can come in many forms by many different people involved in a person’s life. It is found that parents, brothers, sisters, peers, teachers, strangers, etc…, are abusers, not just one person. Usually, it is the serial killer’s immediate family that does the abusing through neglect, violence, alcohol, drug, and/or sexual abuse. Emotional abuse also plays a major role on childhood abuse.

In the United States, each state now has state programs to intervene before the child is affected to greatly. Although a lot of these children fall through the cracks in the system, and then it is too late or they are killed themselves (ID channel).

Mental disorders are found in most of the cases of serial killers. They are not diagnosed early enough to get help and/or be treated properly. The most frequent mental disorder recognized in them is paranoid schizophrenia and/or extreme sexual fetishes (Brogaard and Marlow). Along with above mentioned disorders, physical and/or sexual abuse is usually also found. The definition of a psychopath is “a person with a psychopathic personality, which manifests as amoral and antisocial behavior, lack of ability to love or establish meaningful personal relationships, extreme egocentricity, failure to learn from experience, etc.” (Dictionary). “If psychopathy is genetically determined, one should expect some abnormality in the brain, the immediate source of psychopathic traits. A possible candidate for this abnormality has recently been identified in a study at University of Wisconsin, Madison. Brain scans revealed that psychopathy in criminals was associated with decreased connectivity between the amygdala, a subcortical structure of the brain that processes negative stimuli, and the ventromedial prefrontal cortex (vmPFC), a cortical region in the front of the brain that interprets the response from the amygdala” (Brogaard and Marlow). The social standing of serial killers may surprise and intrigue people. They are average, family oriented, church going people. The façade they represent to the people around them is a far cry from the true nature of the evil they really are. These pillars of the community are the biggest cons in the world.

Some examples of serial killers who outwardly seemed like everyday people are the BTK Killer and Ted Bundy (Lori Hitt).The BTK (Bind, Torture, Kill ) serial killer was a deacon at a Lutheran church. He was also the president of the church council. Dennis Rader (the BTK Killer) was a Cub Scout Leader, too. He was arrested on February 25th, 2005. He was later convicted of 10 known murders. Police believe he committed more than the 10, but do not have evidence, yet (Charles Montaldo). The serial killer known as Ted Bundy was a college student at the Wichita State University, University of Puget Sound, and University of Washington State. He was studying law. He was in the United States Air Force, also. Although these actions seem like those of a normal person, he was a psychopath. He did his killing spree from 1974 and 1999 (Charles Montaldo).

James Dobson interviewed Ted Bundy before his execution. This is some of the interview with him. “JCD: How did it happen? Take me back. What are the antecedents of the behavior that we’ve seen? You were raised in what you consider to be a healthy home. You were not physically, sexually or emotionally abused.” “Ted: No. And that’s part of the tragedy of this whole situation. I grew up in a wonderful home with two dedicated and loving parents, as one of 5 brothers and sisters. We, as children, were the focus of my parent’s lives. We regularly attended church. My parents did not drink or smoke or gamble. There was no physical abuse or fighting in the home. I’m not saying it was “Leave it to Beaver”, but it was a fine, solid Christian home. I hope no one will try to take the easy way out of this and accuse my family of contributing to this. I know, and I’m trying to tell you as honestly as I know how, what happened.

As a young boy of 12 or 13, I encountered, outside the home, in the local grocery and drug stores, soft-core pornography. Young boys explore the sideways and byways of their neighborhoods, and in our neighborhood, people would dump the garbage. From time to time, we would come across books of a harder nature – more graphic. This also included detective magazines, etc., and I want to emphasize this. The most damaging kind of pornography – and I’m talking from hard, real, personal experience – is that that involves violence and sexual violence. The wedding of those two forces – as I know only too well – brings about behavior that is too terrible to describe.”

During this interview he clearly states he was not abused in any way, but just the opposite. He came from a very loving and nurturing home and family. This is usually not the case with serial killers. Ted Bundy is one of the exceptions.

Another serial killer is Miranda Barbour. On February 18, 2014, she told the FBI that she helped her husband kill a man from Craigslist. In an interview with The Daily Item in Sunbury said she has killed more than 20 others around the country (USA Today.) Police are still working to confirm these murders. Females as well as males are serial killers, “…but they make up just about 15% or 16% of the serial murderer population we’ve seen over the years.”(Eric Hickey).

In conclusion, anyone is capable of becoming a serial murderer under the right conditions. Based on information from criminal psychologist, interviews, and statistics, serial killers are getting caught more and most are white males. Their childhood, mental disorders, and social standing do affect the very aspect of who they are. In case studies most serial killers have been abused. Only 15%-16% of the serial killers are females (Aamodt).More case studies are needed to provide more details on the brain of a serial killer. Murders may be living next door, going to your church, or helping you with your groceries. They con people into believing they are trustworthy and make them feel safe in their presences. They show above average intellect. 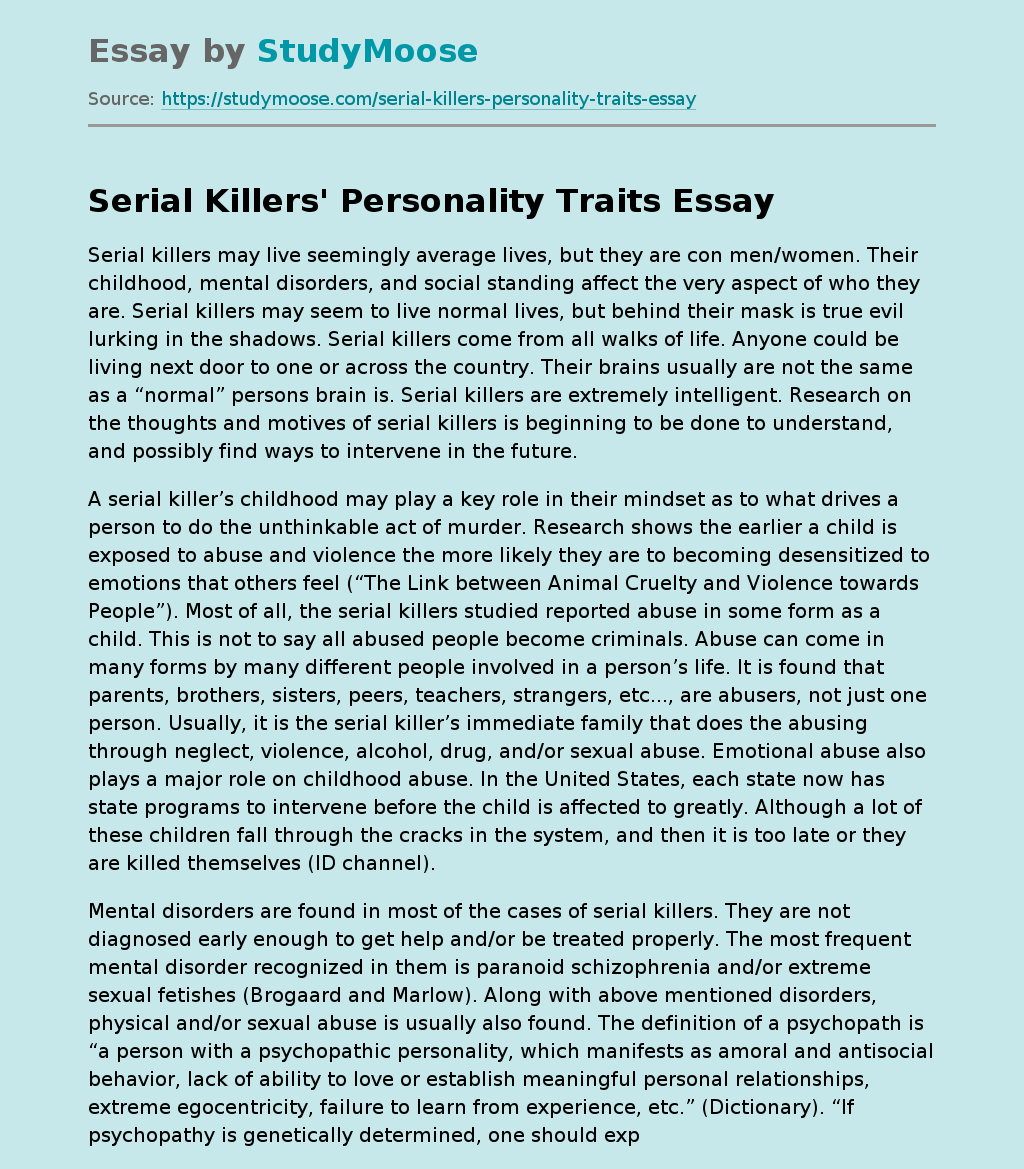