Don't use plagiarized sources. Get your custom essay on
“ Sense and Sensibility ”
Get custom paper
NEW! smart matching with writer

“Sense and Sensibility” refer to Elinor and Marianne, respectively. From the footnotes of the novel, “sense” is defined as possessing judgment and intelligence, while “sensibility” is defined as capacity for refined emotional response to feelings and experiences, involving delicate sensitivity to moral and aesthetic issues.

From these descriptions, Elinor can be portrayed as the embodiment of “sense”, while Marianne is “sensibility”.

At the beginning of the novel, Jane Austen describes these two traits in Elinor and Marianne and how they are in comparison to each other. “Elinor… possessed a strength of understanding and coolness of judgment… and her feelings were strong: but she knew how to govern them” and “Marianne’s… quite equal to Elinor… but eager in everything… she was everything but prudent. ” These descriptions set up the basic personalities of the Dashwood sisters throughout the novel and are important in showing their growth.

Some of the main trials faced in the novel are for “sense” and “sensibility” to cooperate and for the sisters to find a meeting point between reason and emotion. In the novel, as Elinor and Marianne mature and develop, the readers start to see the sisters exhibiting each other’s characteristics. For instance, when Elinor finds out that it was Robert that Lucy married and not Edward, she reacted the way the readers would expect Marianne to behave: “Elinor could sit no longer… burst into tears of joy, which at first she thought would never cease. ” By exhibiting “sensibility”,

Elinor demonstrates to Edward her feelings for him and consequently, they are happily married at the end of the novel. Another instance is when Marianne reflects on her behavior: “My illness has made me think… I saw in my own behavior… nothing but a series of imprudence towards myself and want of kindness to others. ” Here Marianne begins to think more rationally and before long, she sees how caring and heroic Colonel Brandon is capable of being (previously, she thought of Colonel Brandon as one who has succumbed to the infirmity of dull middle age) and eventually, Marianne gets her happy ending.

From the aforementioned examples, the readers perceive that it is only when the sisters are able to find an intersection point between reason and emotion and their “sense” and “sensibility” are in balance, do the Dashwood sisters get their deserved outcomes. Here, the title “Sense and Sensibility” act as a plot device, as well as a device for character development. Another way in which the title of the novel is significant is it explores some of the main concerns in “Sense and Sensibility”. One of the main concerns explored is the relationship between Elinor and Marianne.

The title “Sense AND Sensibility” perhaps suggests that “sense” cannot exist and function without “sensibility” and vice versa. Seeing that Elinor represents “sense” and Marianne represents “sensibility”, this would explain the reversal of roles at the end of the novel. The role reversal discards the somewhat fixed descriptions of the Dashwood sisters at the beginning of the novel. If Elinor and Marianne were to remain true to Jane Austen’s characterization of them, they would not be able to achieve their respective happy endings. Another concern explored through the title is societal expectations of women.

In the introduction, it explains that “sensibility” may be considered as “a feminine attribute in some respects, but it would be socially inconvenient for women to possess too much of it, for they would not fit in with what was required of them or put up with what they had to endure”. One example, where the “possession” of too much “sensibility” has caused a problem is Marianne. When Marianne saw Willoughby at the ball, she was overcome by emotions and acted against the social code and shortly after that she fell ill. This is a result of her having too much of “sensibility” and too little “sense”.

Perhaps Austen is trying to make a point that in society, a woman needs to have Elinor’s “sense”, but she also needs to display emotion and possess a bit of passion like Marianne. In short, the well balance of “sense” and “sensibility” is necessary. All in all, the overall impression that the readers get from the title, “Sense and Sensibility”, in relation to the novel’s plot and characters, is that the novel is not about the triumph of sense over sensibility or their division; on the contrary, the readers remember “sense” and “sensibility” as a conjunction of terms that serve together as the compound subject of Jane Austen’s novel. 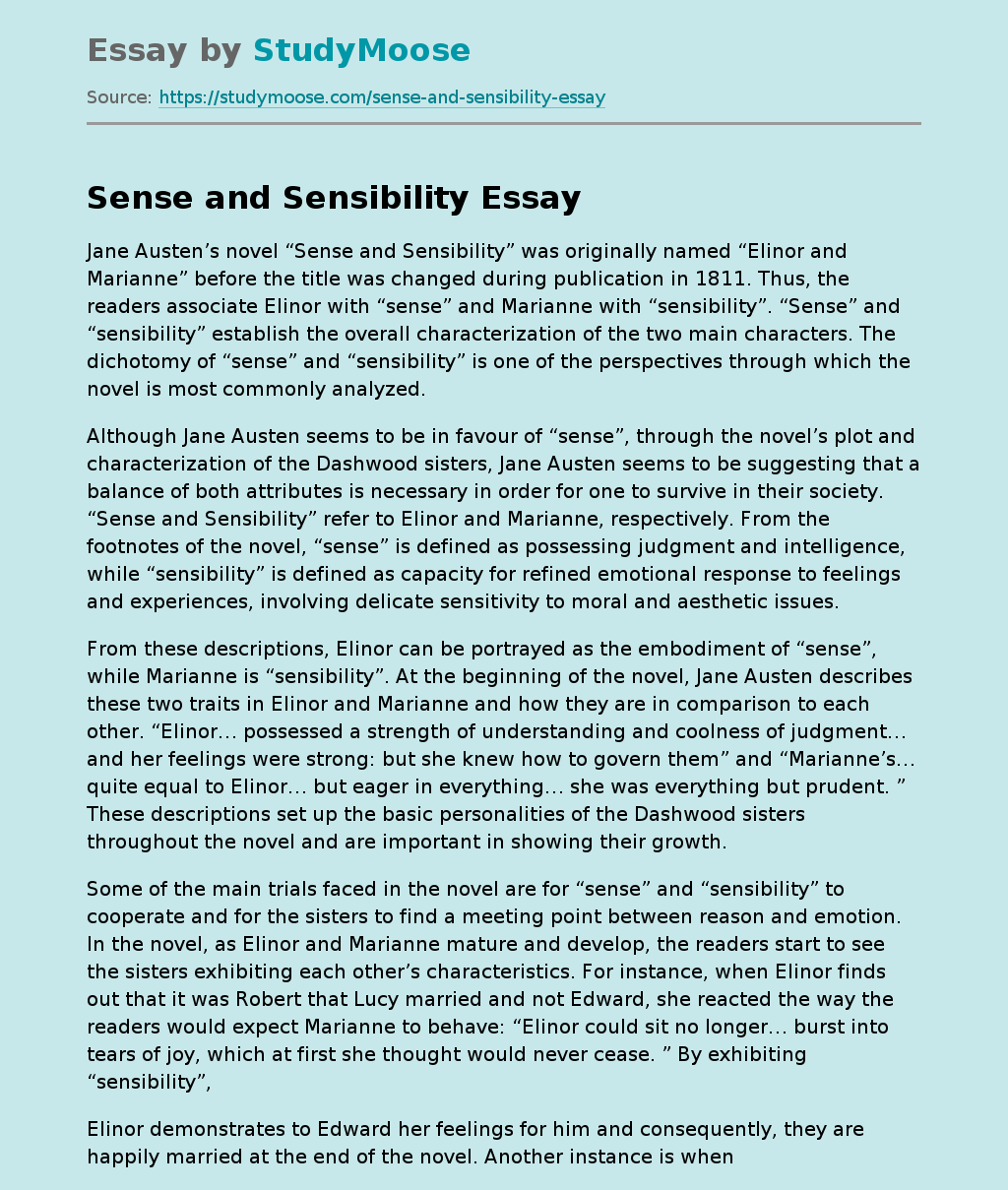