The book is called Sense and Sensibility, and is written by Jane Austen. Tis is the first of Austen’s novels to be published. Sense and sensability is a story of two sisters who embody the conflict between the oppressive nature of civilised society and the human desire for romantic passion. The book opens up with their fathers death. They are the second family of their father. The father had one son with another wife before them. Then his wife died, then with the second wife he had Elinor, and Marianne which are the main characters in the book.

Don't use plagiarized sources. Get your custom essay on
“ Jane Austen’s Novel Sense and Sensability ”
Get custom paper
NEW! smart matching with writer

And the third sister Margaret who is younger than the other sisters. Up until their fathers death. The sisters lived with their mother at Norland Park, which is their fathers estate. But when the father past away, the whole house and state goes to his son of his first marriage due to patriarchy. They went from being wealthy and secure to be poor and having no where to live except a tiny cottage in the middle of no where.

In the late 18th century and through out most of the 19th century, a lot the states at that time where entailed so that they could only be giving to the sons and not the daughters. After the fathers death the legacy will pass on to his son or the nearest man even if he would have daughters. Along the way , the two sisters experience romance and subsequent heartbreak. Both girls strive for love while their lives continously change.

The lessons in love and life made the two characters develope and change with sense and sensability. I would say that this book is a romance novel. With a raw intense quality, Jane Austen creates a romantic masterpieace on the backdrop of a fragile social context. Also it involves a bit of comedy (not like comedy today). Jane Austen is known for her abilty to to create singular characters who linger in one’s imagination, her unparalleded sense of irony and wit. It is more amusing to read than it is serios compared to books about war or other tragical incidents. The story of Austin’s novel is set in the idyllic landscape. Where they live away from war, conflicts and industrial turmoil.

She is very passionate and romantic. She idealises life and love in many complicated ways. Marianne is also superdramatic. There is a scene where she is on a walk outside. She accidently hurts herself and can’t get up. Then a man appears and carries her to her cottage. Her foot was not that injured. You can tell from this scene that she is dramatic and overreacts. What I like about Marianne is that she is more rebelliuos and she says what comes up in her head and doesn’t hide how she really feels. This is the character I can relate to the most, if anyone. I am not as dramatic as she appears to be, but I always say my opinion.

She is more quiet. Elinor is the opposite of her sister Marianne, she tries to hide her emotions wich not always is good. She is realistic and she is down to earth. Elinor is reasonable, careful, cautious person who pays attention to things like living within her means.Both sisters are very different from each other. The two characters build up each other with that special sister-bond. Elinor represents the sense and Marianne represent sensability. There’s a scene when Marianne comes to Elinor and explains how sorry she is about how she has been acting towards her. She said I should have been acting more like you. By that she means that she should have took more responsability since Elinor is the sister that takes the most responsability between them. It is to discuss, but maybe the auther is telling the world Don’t be like Marianne, be more like Elinor. Be the sense.  However, both characters is important and they both learn a lot from each other, even the people reading the book. For example: Elinor learns from Marianne that she needs to focus on herself more.

She is not nice at all and I did not like her. Fanny thinks too much about money, and too little of others. For an example: before the father dies his son John promises his father to help his half-sisters out because when he dies his daughters will not get anthing. But his wife (Fanny) manipulated John by telling him that he’s father surely didn’t mean by financial help. You wouldn’t want to rob the money you herited from your son John. And of course John you know that your father always did love your sisters more then he loves you. She even made him change his mind so he ended up not giving them any money which is why they moved into a cottage. I think that Jane Austen wrote her character very well. Because she is mean but it’s funny to read.

Who is the brother to the annoying Fanny Dashwood. Edward is important to the plot but he doesn’t have much character in the book. There’s barely any dialog considering his importance of the plot. I feel the same wayabout the young little sister Margaret. Margaret doesn’t have a big charachter in the book. I didn’t really understand what role she had and why Jane Austen chose to write about her in the book.

I think that the whole point with this book is, that it is important to have both sense and sensability. Elinor suffers so much because she always keeps her feelings inside while Marianne suffers because she is so open about her emotions and that is what is one of the most interasting things in this book: The way sense and sensability play off each other.Besides the conlfict between sense and sensibility. Austen uses the Dashwoods sisters to discuss the condition of being an upper-class woman, particularly one without a fortune to her name. The Dashwoods are wholly reliant on others for their wellbeing, and without the option of working for a living, Elinor’s and Marianne’s longterm financial stability is dependent on who they marry.

Comparing the book to today

The Dashwood sisters’ struggles with the world. By world I mean with men and mothers, money and manners, that grip the reader and make Sense and Sensibility readable to any generation. Inheritance laws may have changed and conventions altered, but the battleground for young women remains much the same.

This book was written in 1811, and while that’s not far enough back to pose any significant challenges to reading, it is far enough back that the style feels very strange to the modern reader. Austen is, for her time, a fairly concise author.Reading the book, you might notice that some of the wording and punctuation seems a bit unsual compared to in todays books. Austen uses some prepostions and some word structure differently than we use today.

One thing I noticed while reading the book, is that the writing has a certain headlong flow and also a habit of sneakly dropping revelations into the middle of paragraphs.The narrator always seems to be taking the side of whoever she’s describing, shifting viewpoints in third-person omniscient and also changing styles of expression to suit the focus character. She is putting the character in the best light which makes the character more interesting to read about.

It was quite difficult to read. The book contains a lot of complicated words that I didn’t understand and had to translate. I liked reading the book since I don’t read books often. But it wasn’t that exiting so it is not a book I would not recomend to my friends. If you’re looking to read something calm or if you want to learn new words this is the right book for you.I don’t want to spoil the book, but somehitng that I liked about reading this book is that there is always love drama. If one guy leaves, another guy arrives. And it is not only one love story, you get to follow two love stories from each sister. That’s what makes the book interasting. I think that without the love drama from both sisters the book would be a bit boring. 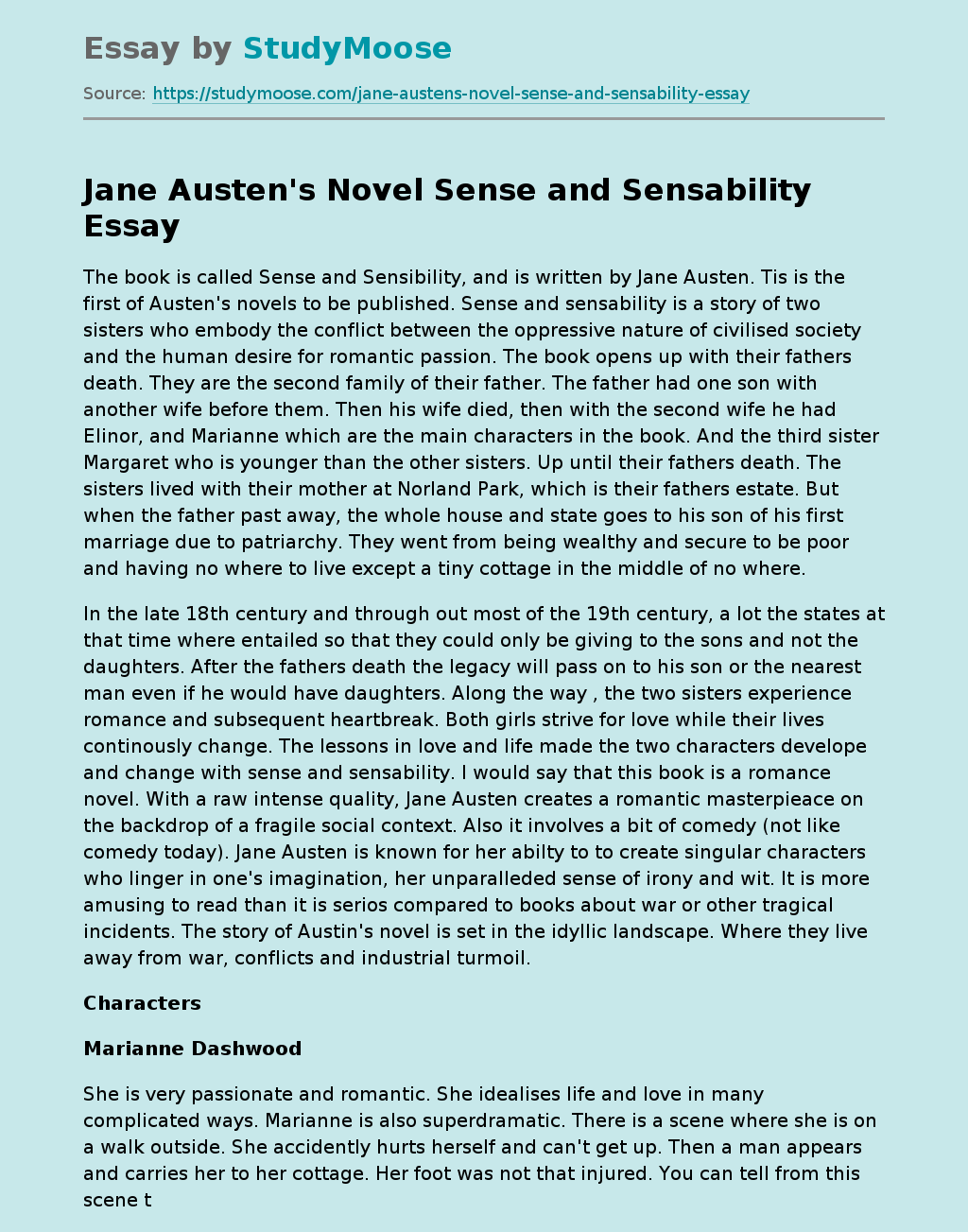