“Celebrities are ordinary people rendered extraordinary through media coverage. ” (Lumby 1997, p. 82) Choose a celebrity figure prominent in contemporary Australian media and discuss their representation in light of some of the concepts raised in the course readings. Celebrities can be defined as people the public are interested in. Traditionally the public celebrated those that had a particular talent, achievement or extraordinary quality such as acting, singing or dancing.

However recently exemplified in the reality television phenomena, celebrity status can occur simply from exposure.

Don't use plagiarized sources. Get your custom essay on
“ Sarah Marie Fedele ”
Get custom paper
NEW! smart matching with writer

The success of the hit TV show Big Brother in 2001 brought celebrity status to many of its contestants. These participants were young ordinary people from around Australia, brought together and rendered extraordinary through media coverage. Through the reality television phenomena, celebrity status occurs simply from the publicity and thus, exposure.

This positive contribution to television encourages the ordinary Australian to compare themselves to the ordinary characters on screen, and believe that they too can be extraordinary.

Sarah Marie Fedele, a twenty two year old strip club manager from Perth participated in the publicity machine of Big Brother, and consequently became an icon for thousands of adoring fans Australia-wide. Overweight, unashamedly sexual, loud, untidy and uninterested in the life of the mind, Sara-Marie emerged as the unlikely poster girl for youthful female confidence.

Sara-Marie, having gone into the Big Brother house as an ordinary Perth girl with a down to earth charismatic appeal emerged to find an enormous following among young women and a newfound sense of Celebrity.

Consequently Sara-Marie has written columns for the newspaper, recorded a song, produced a line of pyjamas and even written a top selling book. The once ordinary girl from Perth has reinvented the conservative celebrity figure in Australian media, to become a popular celebrity, and feminist icon through the media coverage of the publicity machine Big Brother.

Big Brother was originally designed to carefully select a mix of ordinary young Australians, ranging from a club manager and air steward to a hairdresser, and website designer. The program encourages them to compete with each other to win prizes by conquering ‘nature’ or by cooperating competitively with their fellow inmates in socially isolated, long term situations designed and directed by the TV production company. People who aren’t familiar with Big Brother may wonder why so many people are interested in a group of ordinary people.

Dr Peter Cotton, the shows psychologist believes people watch to feel connected with the rest of society: “In our culture, in this day and age, people tend to live in separate little boxes and their everyday lives are much more insulated from other people. So I think there’s a natural curiosity about what people get up to. ” Celebrities can be defined as people the public are interested in. Traditionally the public celebrated those that had a particular talent, achievement or extraordinary quality such as acting, singing or dancing.

However recently exemplified in the reality television phenomena, celebrity status can occur simply from exposure. Dr Cotton says that while all the contestants knew they were going to be famous when they left the house, none of them realized the extent of the celebrity status: “when you come out of there, everyone recognizes you, knows all sorts of detailed information about your personal habits. I don’t think people are prepared for that. ” Thus it can be seen that ordinary people can achieve celebrity status simply through exposure and media coverage.

After being labeled the most likely Big Brother participant to be voted off in the first eviction, the down to earth charismatic Sara-Marie charmed the millions of Australian viewers and consequently survived Big Brother to the final three participants, in which she was the only woman. Proof of the passion she inspired was the forest of fluffy pink bunny ears (her trademark) that traversed the Big Brother studio audience. Ms Marcella Tedesco, 34, of West Ryde, was one of hundreds wearing bunny ears in support of the ill-fated Sara-Marie.

“I just think she’s the most gorgeous little woman on this Earth. She is what I want to be because I am shy. I love watching people and thinking, ‘Hey they are just like me’. I am normal. ” This quote illustrates that people don’t only celebrate extraordinary talented people placed on a pedestal, but ordinary flawed people just like Marcella are now celebrated for being themselves. Sara-Marie was an ordinary girl with an extraordinary appeal to the audience, which led to celebrity status through the media coverage of Big Brother.

Sydney University’s associate professor of media studies Cathrine Lumby has studied several hundred girls to examine their response to the reality television program Big Brother, and their response in particular to Sara-Marie. “The reason they loved her wasn’t because she was a good role model or because she was fat… they didn’t care about that. They liked the fact she just liked herself regardless of what she looked like. ” Like many celebrities however, Sara-Marie and Big Brother did receive criticism for their attempt to turn ordinary Australians into celebrities. 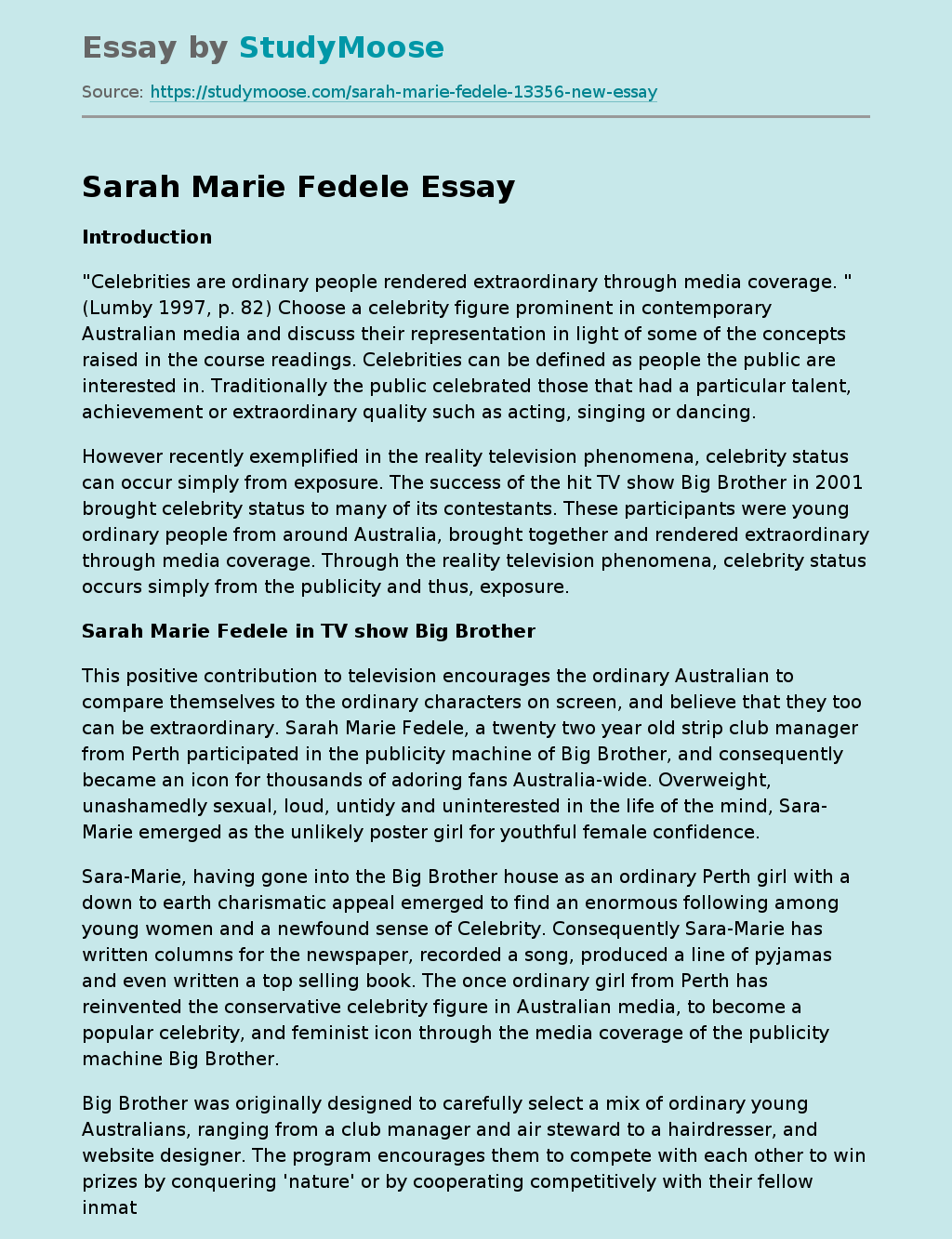