Who is Haile Germia? Haile Germia is an Ethiopian filmmaker, film director, screenwriter who was born March 4, 1946 and raised in Gondar, Ethiopia who now lives in the United States. He immigrated here to the United States in 1968 to pursue acting, and enrolled in the Goodman School of Drama located in Chicago. He is best known for his film Sankofa which raised a lot of awareness to the African American community. He is also known for the Los Angeles school of black filmmakers.

Don't use plagiarized sources. Get your custom essay on
“ Sankofa Film Analysis ”
Get custom paper
NEW! smart matching with writer

He is a very influential professor that teaches at Howard University which is located in Washington, DC, which he has been teaching there since 1975.

Colorism can be defined by a practice of discrimination by which those with lighter skin are treated more favorably than those with darker skin. (Race Relations). In the movie Sankofa colorism was displayed throughout the whole movie. When the house slave Joe who is the son of nunu, was light skinned and not as dark as his mother or the other slaves.

He was basically treated like he was one of the white men. He had more authority but was still considered a slave. He grew up always being a house slave so in his mind he was “one of them”.

Which made him believe that he was different, and wasn’t like the others. So at the end of the day he was always treated differently and better when it came to who he was because of his skin tone. I believe Germia was trying to say that religion is very big in the African American enslavement.

I believe the reason why he displayed so much religion is because that’s how slaves worshiped. They believed that things would changes and praised a higher god. Because they didn’t have anything else but each other, they knew their God wouldn’t fail them so psychological God is all they knew.

It was who they praised every night in the cave and what gave them strength that knowing something better was going to happen. Physically was through their songs and dances that were displayed throughout the movie. The role of religion is something that is highly thought of and used throughout the enslavement. I believe it’s how they got their voice heard. Because the white men were not listening to them and treating them anyway they wanted, the one thing they could count on was their God. The thematic elements in this movie are displayed from the beginning to the end.

Some thematic elements that were displayed throughout the movie were religion, abuse, discrimination and death. Death and abuse verbal and physical was a big part of the movie. It was something the slaves knew all too well. If they were whipped to death or killed death and abuse became the subject of the movie. Discrimination is how they treated some slaves compared to the other slaves. Whether or not it was a house slave or a slave who worked for the white men and carried out their orders, they had more privilege to do things than the regular slaves.

That’s how discrimination is played throughout the whole movie. Religion was also big in the movie. From Joe having his own religion that he believed in and what the other slaves believed in. He was raised believing the white man’s religion instead of what the slave’s religion was. Which goes back to Joe being different from the others, because he didn’t do anything that made him who he really was; It was like he was living a lie. I think this film raised awareness to African descent’s because many may not know how life was like for the slaves.

A lot of people fail to realize that they endured so much just for us as an African American community. The African oral tradition that was displayed throughout the movie was telling stories, singing songs, through praise, and through their old “sayings” basically what they believed in. Shongo and Nunu were they main ones who were very active in the oral tradition. Shongo is the one who led the others to trying to gain their freedom back. He would be famous for the saying “The snakes gwine eat whatever is in the snakes belly”. It was an old “saying” that he believed in that spread to all the other slaves.

It was about gaining their freedom back which is something they attempted to do. Nunu was the role model for all the other slaves. When they had a problem or needed help they went straight to her. She was very big on storytelling and believed certain things worked a certain way. This movie was very symbolic to the enslavement that occurred so many years ago. It gave a different outlook to others who had no idea what slaves had to endure. The foul that was mentioned in the movie was symbolic at the end when it was looking back. Shola had mentioned that the foul had carried her way; the foul was their rescue all along. Foreshadow was displayed a couple of times, as I said earlier when shongo quoted “The snake gwine eat whatever is in the belly of the frog”: it was saying that they were after something. More foreshadow was displayed when Joe asked Father if he was practicing the right religion and if his skin color defined him. You could tell that Joe was going to come to point where he knew that what he was doing was wrong. you can tell that he was going to come to his senses and find himself no matter how it happened. 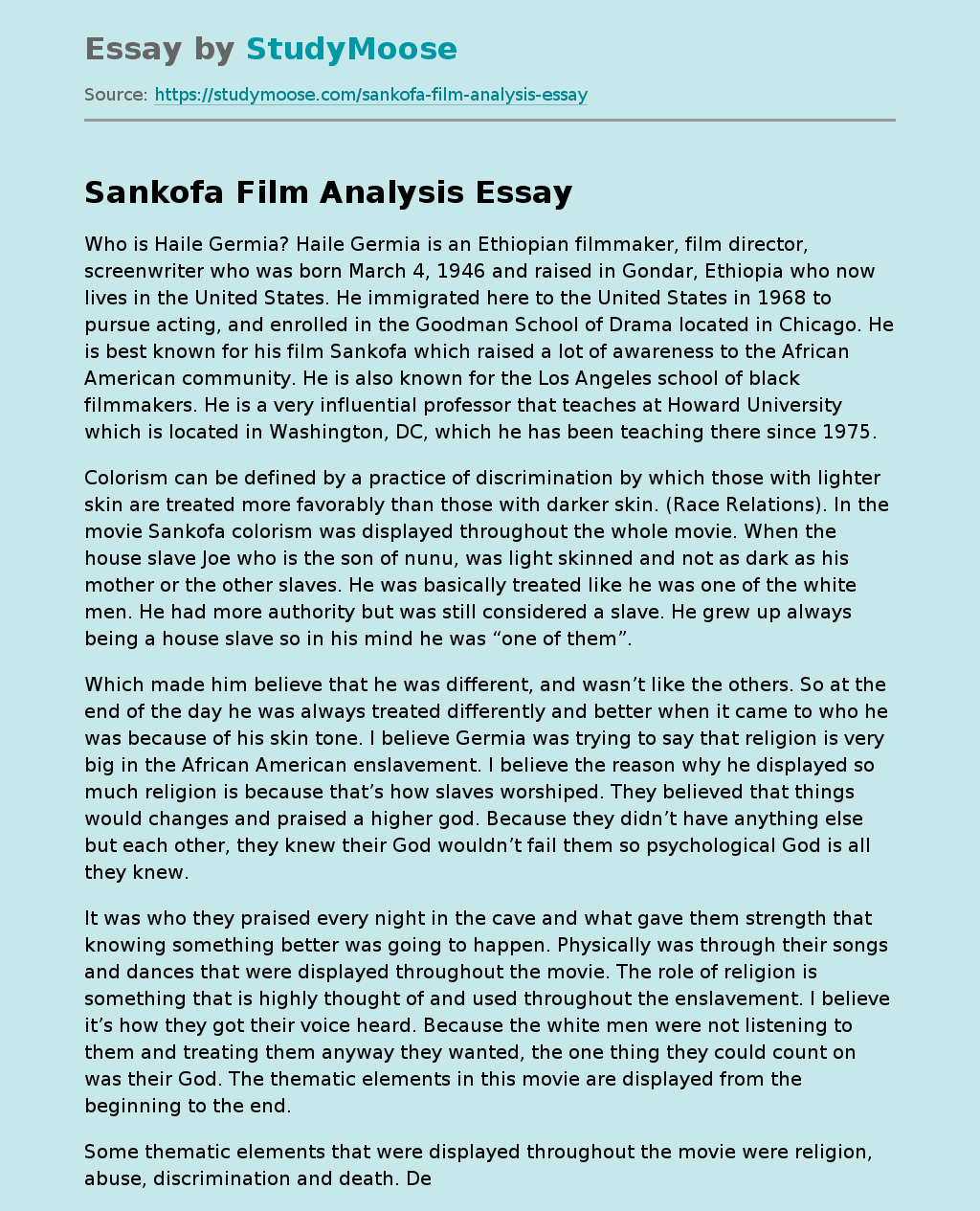