The fund managers in Bear Stearns made mistakes and the first one was failing to predict accurately the behaviour of the subprime market under the given extreme circumstances. Effectively, these funds were not accurately protected from the event risk. Secondly, the bank failed in having enough liquidity to cover debt obligations. Given they had the adequate liquidity; the bank would not have to close their positions in a bearish market. Even as this may well lead to smaller returns because of less leverage, it might have prevented the on the whole collapse.

Don't use plagiarized sources. Get your custom essay on
“ Bear Stearns ”
Get custom paper
NEW! smart matching with writer

The appropriate corrections to the risk models

In retrospection, by giving up a small part of possible returns might save the investor millions of dollars. In addition, it is debatable that the bank should have researched better the macroeconomic situation and understood that subprime mortgages could face tough times. Bear Stearns could have then made appropriate corrections to the risk models used. Liquidity growth globally in the recent years was tremendous, and resulted in low interest rates as well as credit spreads and lastly resulted in lenders’ record high level of risk-taking to low credit quality borrowers.

Since 2005, economy of the US has been slowing down and one of the causes was the peak in the housing market and borrowers of the subprime are particularly at risk to an economic slowdown. Thus, it was reasonable assuming that the economy heading towards a correction. Ultimately, the flaw for the investments banks, Bear Stearns, could be considered the high level of leverage engaged in their strategy.

This was driven by the call for justifying the high fees the bank charged for its services and achieving the potential compensation, more exactly 20 % of profits.

In another order of ideas, the managers should not combine leverage with greed. Just as Bear Stearns, starting in 2005, UBS was buying mortgage backed securities, making profits from the high yields bonds, and trusting at the same time that the bank’s triple AAA credit rating could protect UBS if or when the risky underlying MBS began to sour. The bank’s fixed income division was also buying mortgages and was repackaging these mortgages as securities, trying to sell them to potential investors otherwise simply adding them to the already heavy inventory of the bank.

With parts of the bank doubling down on mortgages, revenues and profits rose. But, by the beginning of 2007, trouble was coming up as the US subprime lenders such as New Century were filling for bankruptcy. Losses were rising; UBS became the first casualty of toxic mortgage debt on Wall Street. In April 2008 UBS admitted that its hunger for profit together with poor risk control, was the cause for its huge credit losses. The Swiss bank declared that: ‘UBS Investment Bank was focused on the maximisation of revenue.

There appears to have been a lack of challenge on the risk and reward to business area plans within the investment bank at a senior level’ (Litterick, 2008). The report to shareholders, which was a review of the summary of the bank’s losses ordered by EBK, Switzerland’s banking watchdog, exposed an ‘asymmetric’ focal point at UBS senior management on revenues, profits and loss. It was also added: ‘Especially when compared to discussions of risk issues’ (Gow, 2008).

The review also showed that the bank allowed the considerable growth in UBS investment banking division to run its course unchecked. UBS had write downs in the first quarter of 2008 of 37 billion dollars which is 18 billion pounds, two thirds of which is related to its CDOs within its fixed income division. Proposed improvements were not mentioned in the report which covers only the period up to the end of 2007, with further losses to be reported since UBS was considered at that point Europe’s prime casualty of the so called ‘credit crunch’.

The bank losing 4.3 billion dollars in 2007 was said to incur additional substantial losses for the first quarter of 2008. David Gow’s article (2008) points out the absence of risk management, the deficiency of operational limits and the imperfect risk control methodology on top of the lack of response to changing market conditions since the subprime crisis arose. UBS has 2. 8 trillion dollars in assets, made a large ‘bet’ (Schwartz, 2008) on subprime mortgages. UBS’s write downs were more than Citigroup, Merrill Lynch, or globally more than any other bank in April 2008.

Dirk Hoffmann Becking, who is an analyst with Sanford Bernstein in London, mentioned that ‘People now question UBS’s ability to manage risk and judge just what a conservative investment is’ (Litterick, 2008). At any point in time every trader may feel either pessimistic or optimistic. Most of the time, from corner to corner of the market as a whole, the traders’ feelings are more or less cancelling one another out, otherwise too much of an imbalance is not created either way. However occasionally, such as in a credit crisis, sentiment spreads similar to a contagious disease.

The wisdom of the crowds becomes more of the madness of the crowds. This is the moment when the risk is negatively rewarded because the situation occurs faster than the banks can actually escape the toxic debt. A wealthy, perfectly viable and healthy system may possibly exist with the overall levels of return being lower. But the current expectations demand taking on board risky positions, leverage, and the usage of complex financial instruments in order to satisfy demand for that high risk. 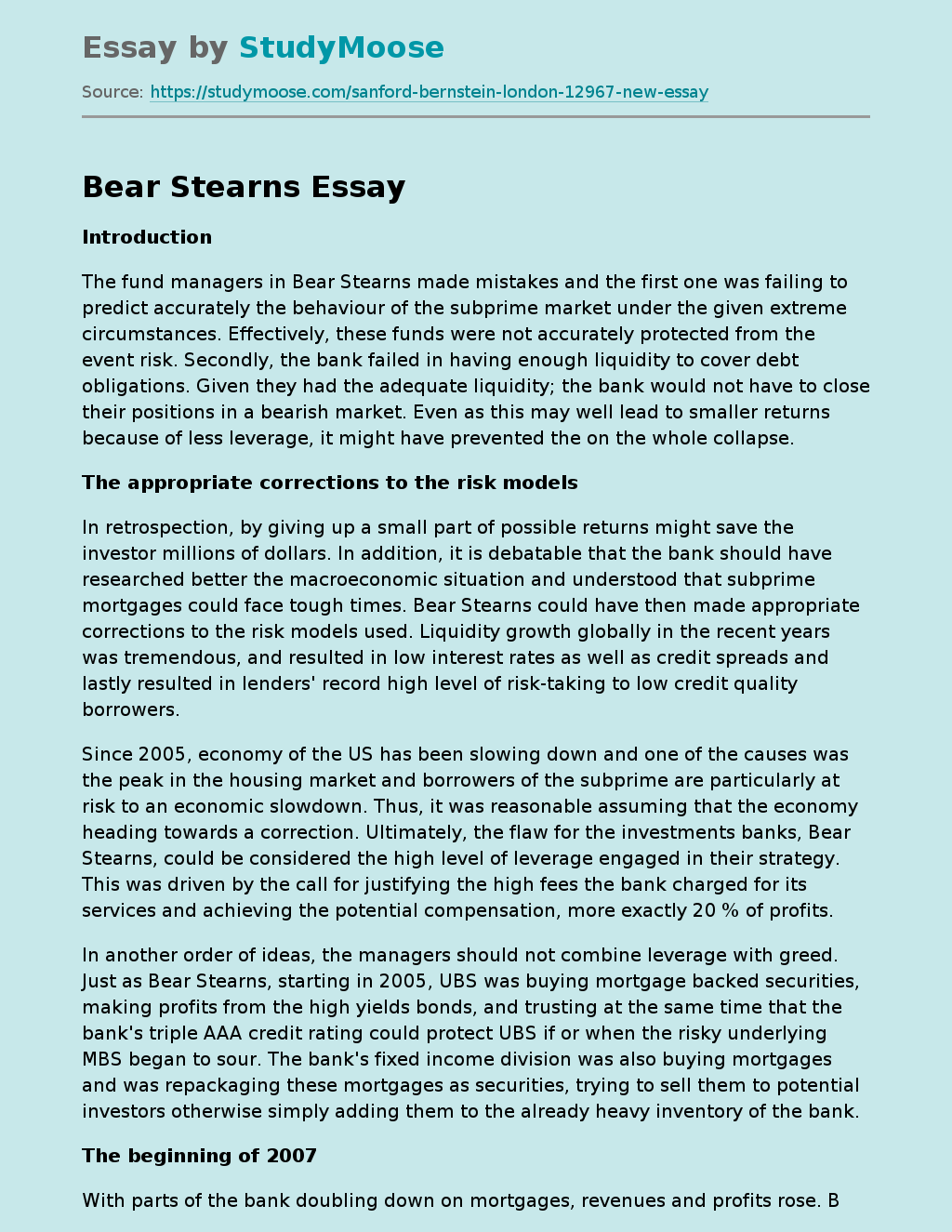