The issue of same-sex marriage has quite polarized society. There are those who are in favour of total equality of right for homosexuals, and there are those who are completely against the presence of homosexuality in our society. Very rarely does one find middle ground. It may seem difficult to find a stance on this issue that is not rife with hypocrisy and doublespeak. Having researched the conservative arguments against gay marriage , it has become apparent that all of the non-religious arguments against same-sex marriage can be dismissed as false, unreasonable, or irrelevant.

Turn in your highest-quality paper
Get a qualified writer to help you with
“ Same Sex Marriage: A Critical Analysis ”
Get high-quality paper
NEW! AI matching with writer

The religious arguments pose a different challenge since they are not based on anything strictly rational, and therefore they shall not be dealt with here.

Some critics of same-sex marriage argue that it is unnatural. That homosexuality is merely a human social defect and that attraction to the same-sex is a learned behavior. According to them, animal societies are free of these social deviants and are inherently better.

However they fail to recognize many recorded instances of homosexual behavior among animals . Many species of animals have displayed acts of anal sex, same-sex kissing and same-sex long-term pair bonding. Some people explain this away by claiming that animal homosexuality only arises when there is a shortage of the opposite sex. However this is not the case, and sometimes even the opposite is true. Of course, even if this were true, claiming that since something does not happen in nature it must be bad for humans is ridiculous. After all, animals do not participate in religious ceremonies, they do not practice medicine or build nuclear weapons to protect their precious bodily fluids from the commies, projects which many opponents of same-sex marriage are likely in favour of.

Another argument against same-sex marriage is that the purpose of marriage is procreation. This may seem a reasonable argument at first, but then one realizes how full of holes it is. Traditional couples who are infertile or who chose not to have children are still allowed to get married. Women who have gone through menopause are still allowed to marry. If the purpose of marriage were procreation, all of these marriages would have to be dissolved. Elderly married couples would have their marriages dissolved as soon as the woman went through menopause, or if the man got a vasectomy. Also, just because a couple cannot procreate itself, it does not follow that they cannot raise a child. Adoption does exist, as does artificial insemination. Furthermore, with over six billion people on the planet (and growing), one may seriously challenge the view that we need an institution promoting rampant birthing .

Homosexuals (bisexuals and male homosexuals primarily) are generally seen as more promiscuous and deviant than heterosexuals, for instance, the public perception of bathhouses. This leads directly to the view that they should be prevented from getting married. Wait, no it doesn’t! If homosexuals are more promiscuous, it is merely because they have been ostracized from society for so long that they need to stay within a small circle lest the truth be known. Heterosexual males are expected to always be looking for a lay, and indeed are seen as being more manly if they succeed, and now the same behavior is seen as a reason for denying homosexuals the right to marry.

Some people think they have a central point of view and an idea that will please both sides: Let homosexuals have a legal institution that does everything a marriage does, under a different name. This way the homosexuals get the right to family visits in hospitals, inheritance and all other rights granted to married couples. The conservatives are also happy because marriage still exists like it always has. Great idea, let’s make a different institution for interracial couples too, and for people with different religions. That way the same-sex couples will always know they are different and although legally equal, not quite as “equal” as traditional couples in terms of public perception. If same-sex couples are allowed the same legal rights as marriage under a different name, it ensures that they will always be an exception to the rule. If somehow marriage is changed, there is no guarantee that their institution will also change the same way. It is merely a convenient way to appease the more centrist people while discriminating against same-sex couples.

The Concise Oxford Dictionary Ninth Edition states marriage as being the following:

1 the legal union of a man and a woman in order to live together and often to have children.

2 an act or ceremony establishing this union.

3 one particular union of this kind (by a previous marriage).

4 an intimate union (the marriage of true minds).

5 Cards the union of a king and queen of the same suit.

For some people, this is enough to claim that marriage is exclusive to men and women. The problem is that words change their definitions over time. For example “the arts” used to mean the trivium and the quadrivium (e.g. grammar, logic, arithmetic, geometry, etc). However, nowadays it usually only applies to things such as painting, sculpture, film and music. If we insisted on the old definition of marriage, we would also have to insist on the old definitions of everything (like fag, queer, dyke, etc.).

This also goes with the argument that allowing same-sex marriages undermines the traditional institution of marriage. Yes, it does undermine parts of the traditional view of marriage, but is that necessarily a bad thing? Already the divorce rate in Canada is about half of the marriage rate , so obviously the “traditional” way of thinking about marriage is not working very well in our society. If same-sex marriages undermining the institution of marriage is a bad thing, then it follows that interracial marriages do the same, if you use this argument you’re either racist or a hypocrite.

Why can’t same-sex couples just agree to live together monogamously? The piece of paper isn’t really needed anyway. Some people ask this, they do not realize that with marriage comes several rights not granted to two people simply cohabiting. Inheritance rules change, one acquires the right to visit someone in hospital, adoption becomes easier and the two are legally in the same family. Without the actual marriage, none of this happens. There are some approximations of this in common-law and civil unions (“conjoint de fait” in Québec). However, there are still things found only in marriage. In order for same-sex couples to get the same rights as others, the exact same institution must include them.

There is an argument against same-sex marriage that claims it should not be allowed because if a same-sex couple ever raises kids, the child will get teased in school. This is not a very strong argument, first of all, kids will for the most part hate whoever their parents teach them to hate. Second, not all same-sex couples will raise kids. Third, kids get teased for all sorts of reasons. If we prevent same-sex marriages because their kids will get teased, we must also prevent kids from ever learning anything intelligent, and force their parents to buy them 80$ jeans and 50$ t-shirts to look like the latest rap/pop star. This argument will just be classified under the “irrelevant” part, because in order for kids not to tease others, it is the parents’ responsibility to make them tolerant of others. Furthermore, same-sex couples who are not legally joined already adopt children and the response in schools is usually one of support from the teachers in order to make the other children accepting.

The argument that gets most conservative-minded people is the “slippery-slope” argument . It states that if we allow same-sex marriage, then that opens the door to polygamy, incest, adultery and literally anything. To most people this argument’s “shock value” is enough to make them forget an important idea: “If someone wants to do something and it isn’t hurting you… DON’T BE A FUCKING DICK” . This is the old “no harm” liberal idea. As long as something does no consensual harm to anyone else, that thing should be allowed.

Aside from religious arguments, there is nothing inherently wrong about polygamy as long as all parties concerned are aware of what’s going on, safe sex precautions are taken and no one is being coerced. Incest is another matter because if procreation results, harmful recessive genes can be expressed, resulting in a higher chance of birth defects, however in this case it can be shown that non-consensual harm occurs (to the potential offspring), also usually incest involves one of the partners in a position of power or authority, so consent is difficult to prove. Basically this argument is won either by following the “no harm” principle or by believing in some sort of inherent “immorality” towards more deviant social and sexual practices.

In the more conservative societies such as the Canadian prairies and certain regions of the United States, it seems that the majority of people are against gay marriage (although no unbiased information exists to support this). Thus it can be argued that the will of the people is not to allow same-sex marriage. However there was also a time when majorities were against racially integrated schools (Central High School, Little Rock Arkansas) , to the disagreement of the federal government. Yet in the end, tolerance won (with the help of federal troops) and you will find few people arguing that this had a negative impact on society. Just because a majority wants to discriminate against a group does not mean the federal government cannot do anything about it. Tyranny of the majority is still tyranny.

It seems there is little for either side to agree upon in this debate. However one (slightly radical) solution can be proposed. The legal institution of marriage could be abolished. In its place, a legal, civil union would allow exactly the same rights to any group of people. “Marriage” would then only refer to the religious bonding of people by a church – it would have no legal significance. It would then be up to the individual churches to decide who is eligible for marriage. Of course this will never happen because it would settle everything too nicely. Until there is a clear distinction between legal marriage and religious marriage, it does not seem that a win-win solution can be found.

The conservatives are vocal and numerous. However all of their arguments can be refuted. In all cases of minorities trying to get the same rights as the “majority”, whether they be French Canadians, immigrants, women or blacks, the minority in question has always won out (at least legally) in the end. Whether one likes it or not, tolerance will always win out over oppression. 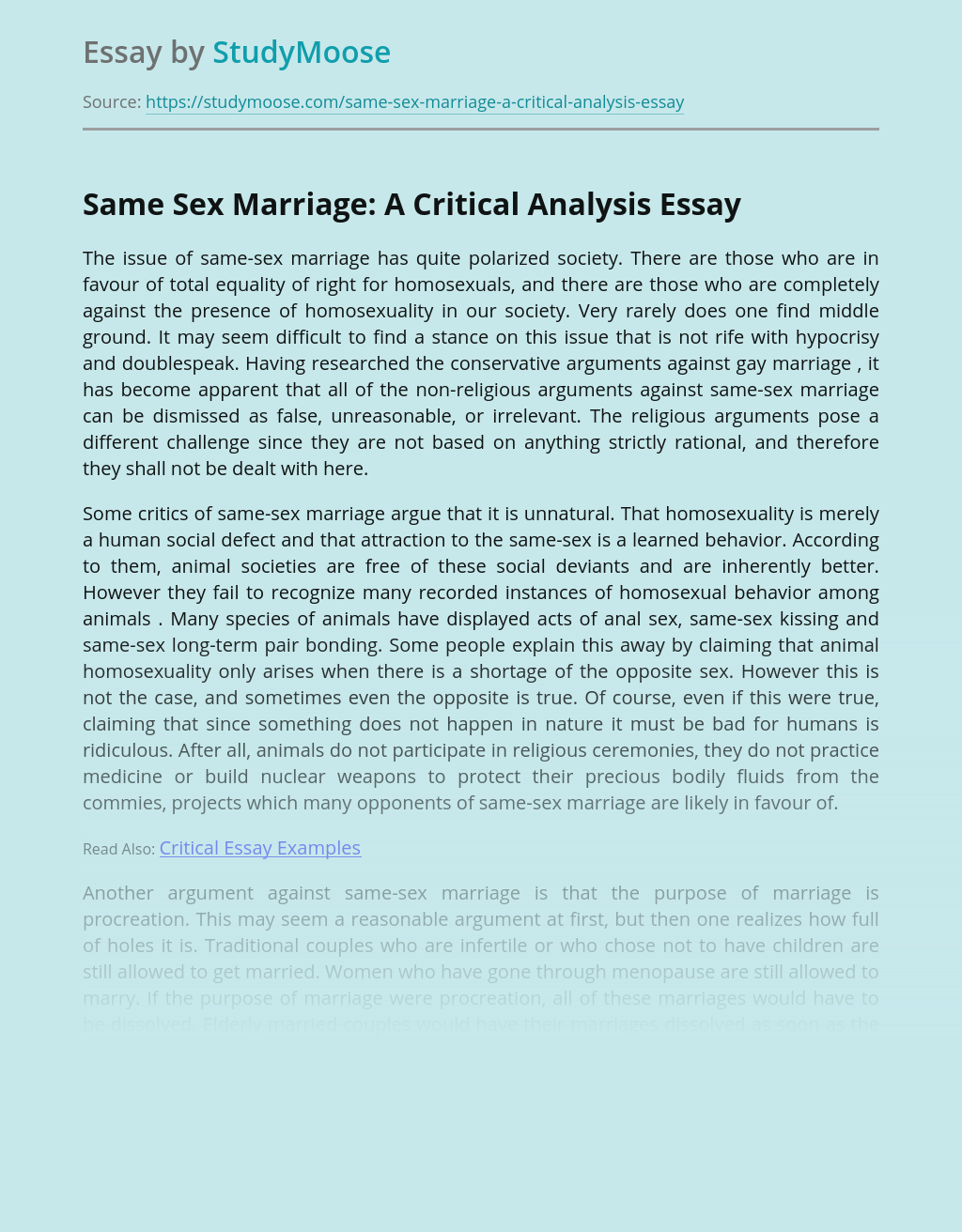 Turn in your highest-quality paper
Get a qualified writer to help you with
“ Same Sex Marriage: A Critical Analysis ”
Get high-quality paper
Helping students since 2015
Stay Safe, Stay Original