It is indisputable that there has always been a sharp distinction between urban and rural living. Therefore many people at some period of their life find themselves questioning the advantages of rural and urban life. Many villagers would like to abandon their godforsaken place and to move to a big city. All of us know a modern Russian fairytale about a girl or a guy who leaves his home country to conquer Moscow. The fact is that it seems to some people prestigious to live in the very centre of a big city or at least within the precincts of a town.

Turn in your highest-quality paper
Get a qualified writer to help you with
“ Rural Life vs. Urban Life. a Russian Example ”
Get high-quality paper
NEW! AI matching with writer

Ironically enough but many townsmen would prefer a placid country to their bustling towns. There have been cases already when some successful well-to-do people moved to countryside to lead a regular life, to breed cattle and poultry, to grow vegetables and orchard trees. Of course there is a great gulf between a country and a city, and it is quite difficult to say at once with no reflections where it is better to live.

Though both rural life and urban life offer great benefits, they both have a seemingly equal number of drawbacks. So, on this speech I would like to take a good look at positive and negative sides of living in a city and a country, and to understand where it is better to live. To begin with let’s enumerate and discuss all the advantages of rural living. Firstly, in a country or in a small town there is a better environment to live in.

There is less traffic in a country and as a result people living there do not have to inhale vehicle emissions as they do in any big city. On the contrary instead of polluted air you always have fresh air, country amenities such as fields, forests, valleys, rivers and lakes in a rural area. The same cannot be said about the life in a city where the atmosphere is like a periodic table; sometimes it is even possible not to find a single tree or bush in a city. And even if there are any lakes or rivers in a big town, very often swimming in them you feel as though you are a pig and you bathe in a muddy puddle.

What is more, village people instead of city residents do not worry about the quality of the foodstuffs they eat: all vegetables and fruit are organic without any pesticides, dairy products are given by their own cows, meat and eggs are fresh and tasty. Secondly, there is such advantage of the country living as its tranquility and relaxed pace of life. Honking cars and busy people hurrying somewhere all the time do not bother you in a country. Instead of big city noises in a rural area you can enjoy birds’ warbles, grasshoppers’ chirr, frogs’ croaking and other sounds of nature not going far from your home. Thirdly, in a country you cannot face the crime rate you can encounter in any city. Clearly, that crimes can be committed even in a rural area, because creeps and fools live everywhere.

But even though it is much more safely to live in a small rural place, as all the residents of a country know each other quite well, they can say who is able to do something bad and who is not. They treat strangers watchfully, because they do not know what a person that man or woman is and what he or she is able to do. In comparison with a country, everyone has to be on the alert in a city all the time, as it is much more dangerous exactly in a big town than in a village to walk till late at night, to leave your door and windows open. In a city you have much more chances to get into an accident or to be a victim of terrorism, robbery, rape, etc. And last but not the least advantage of rural life is very close communication between countrymen. One might feel comfortable that he knows all people surrounding him and in his turn is well known by his neighbors.

In a country you can always get support from your fellow villagers, generally country people seem more helpful in emergency situations than people living in cities. As for the latters they are indifferent, impersonal and even isolating very often. Nevertheless there are a whole bunch of advantages in urban living. And these urban advantages are negative sides of living in the country. Firstly, living in the city people do not have problems with social services. It goes without saying that there are the central heating, regular water supply and uninterrupted electric light in any apartment in a city. But speaking about a Russian country it can be quite a serious problem for country dwellers, because they very often do not have the water supply or electricity at all, not speaking about the telephony and the Internet. Secondly, in cities there is a wide range of public vehicles: buses, trolleybuses, trams, taxis.

What is more, people in our Russian cities have at least some sort of asphalt roads, though they are really poor, but Russian country residents do not have any proper asphalt-paved roads at all, all they have it is impassable muddy country roads covered with ruts. Thirdly, there is a better education in cities than in rural areas. Parents and their children can choose from a long list of public and private schools one the most appropriate for them. Also they have a great variety of colleges and universities. The country education is really poor, at least in our country. And no wonder good teachers and university professors do not want to work for peanuts in a country. The same situation is with public health. There are a great number of hospitals and clinics in cities, as well as a great number of specialists, while countrymen very often have the nearest first-aid station many hours journey from their village. And very often physicians in the countryside are not skilled and well-educated.

Fourthly, it is also worth noting that urban areas offer residents the possibility to choose from a range of numerous companies or organizations to be employed at. In Russian contemporary countries people do not have many work places and they just have nothing to do there. Unfortunately, but very often it leads to substance abuse for want of anything better to do. Fifthly, there is a great convenience in a city, because everything is reasonably attainable ranging from supermarkets and malls to gas stations and restaurants. There are a lot of cinemas, theatres, museums, clubs and other cultural and entertaining centres in cities, while in countries they do not have any diversity, but only one poor store, one third-rate movie theatre and one shabby disco club.

City residents have more opportunities to get intellectual needs, while in Russian countries there are not any proper museums, libraries, art exhibitions at all, but only maybe any ridiculous museums of vodka, of a cucumber and something like that. In conclusion I would like to say that there are lot of advantages and disadvantages to live in a city and as well as to live in a rural area. As for me, I cannot decide where it is better to live.

As it can be expected, not every person can enjoy slow and quiet rural lifestyle, cow pies and roosters’ cock-a-doodle-doo, and actually it is not the best place to live for young career-conscious people but nevertheless I assume that it is not possible to find a better place than a country for families with little children to live in. Healthy environment and food, life among domestic animals have a wholesome effect on kids’ state of mind. But as I have said earlier a country is not a suitable place for young people who strive to get a competitive education, to build a good career, or just want to hang out in a cool place. Actually I believe that it is really awesome to have a lot of money to have an apartment in a city and a cottage in a country, or at least to live in a suburbia. 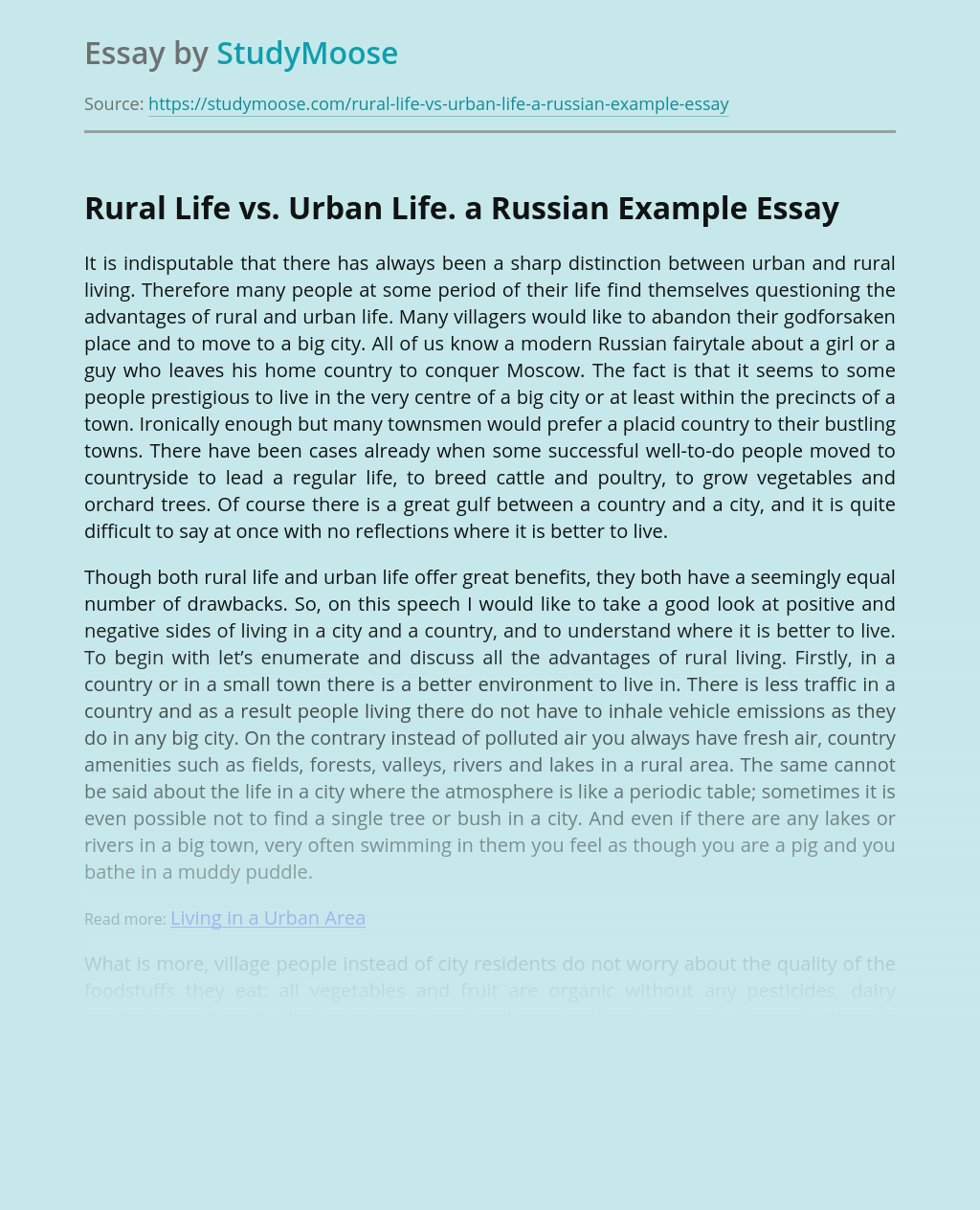 Turn in your highest-quality paper
Get a qualified writer to help you with
“ Rural Life vs. Urban Life. a Russian Example ”
Get high-quality paper
Helping students since 2015
Stay Safe, Stay Original