Living in the Countryside is better than the City

There are around seven billion people all over the world reside in our mother Earth. People in this modern era, especially young generation would prefer to live in the large metropolises rather than living in a countryside or small town. Because of urbanization, people still continuous pelting along into the already herded city that is normal in this 21st century. Most of the society thinks it is better to live in the urban areas than living in the countryside while my inclination is to against this concept that nowadays people have.

Turn in your highest-quality paper
Get a qualified writer to help you with
“ Living in the Countryside is better than the City ”
Get high-quality paper
NEW! AI matching with writer

In the country, the time runs more slowly and you can set your own pace to work.

The amount of money that is earned by people in the countryside is just enough for their living. Because of that, there is less competition with one another to obtain a good position. People in the city often under tremendous stress and pressure as they are in a hurry, busy with heavy workload and catching up with the latest technology.

It is also safer to live in a countryside because it has lesser vehicles and the roads are less dangerous for cycling and driving, therefore the accident rate in the village is lower. It is free from noise pollution too. Another fascinating trait of living in the countryside is the people there is warmer and friendlier. People that are living in the same village recognize each other and you know your neighbors very well. The quantity of inhabitants in the countryside obviously less comparable to the city. As a result, they were easy to know everyone who occupied around the circumstance. People in the country definitely are more courteous that the people in the city.

Village folks will not judge and scrutinized you based on your occupation, salary and status. You can do anything you like without worrying about getting criticized by somebody else. Without oblige from the society, people in the village live more cheerfully. The community of the village is sociable because it had local wisdom that has to be followed by almost village members. People in the countryside will help each other when others are in need and during an event is going on in the village. You do not need to be skeptical when somebody is being nice to you. Almost every place you go in your village, it will be fairly a chance for you to see at least someone you are familiar with. Unlike living in the city, no matter you are staying in a condo or terrace house, people are just minding their own business. The majority of city folks rarely, do not even talk to their neighbors while some of them do not know who their neighbor is. Besides that, it is healthier to live in the countryside, the fresh air is invigorating that you are able to getting closer to the nature. Nature is essential to human health.

The amount of motor vehicles and industrial area are less in the countryside than the urban. Air quality in the country is better because it will not be as dirty and contaminated from the air pollutants. Hence, you will not be inhaling those poisonous gases and particles that released from the factory and vehicles such as carbon monoxide, carbon dioxide, nitrogen oxides, sulphur dioxide and so on. It is getting hotter and hotter to live in the urban due to countless skyscrapers in the cities that causes the greenhouse effect where the heat is unable to release to the outer space. Forest in the countryside also known as an air purifier as it supplies more oxygen to humans so that you can breathe better and live better. People that live in the country are less vulnerable to suffer from diseases that usually faced by city people like stroke or coronary heart disease, migraine, bronchitis, asthma and cancer. The food product-fruits and vegetables that consumed by the people in the countryside are clean and fresh which are harvested directly from the farm itself.

Moreover, it is cheap and economical to live in a countryside. There is plenty of space where you can own a very huge house on your own land with backyard, probably that is the price of you own a condo in the city. The prices of the products that sell in the country is relatively cheaper, especially food products. Since the fruits and vegetables are all grown and harvested in the country, you buy it directly from the farmer itself. So there will be no additional cost as well as transportation fees that is charged by the middlemen to channel to the market in the cities. All the basic necessities that are available in the village are affordable by everyone. You will not feel poor when you are living in the countryside as you can live a decent life even those median family income.

On top of that, there is apparently less mega shopping malls, cinemas and high-class restaurants or café in the countryside as you will find plenty of these in the urban cities. When there is no enjoyment of luxury lifestyle in the countryside, your cost of living will be absolutely much lower than living in the city. Everyone has different preferences to choose where they want to live based on their personalities and lifestyle. As for my stand, taking all these reason mentioned above in into account, it is clearly shown that there are many charms to live in the country for its simplicity of life and the serenity of the surroundings which make the countryside a better place to live, relax and enjoy the quality of life.

Living in the Countryside is better than the City. (2016, Sep 26). Retrieved from https://studymoose.com/living-in-the-countryside-is-better-than-the-city-essay 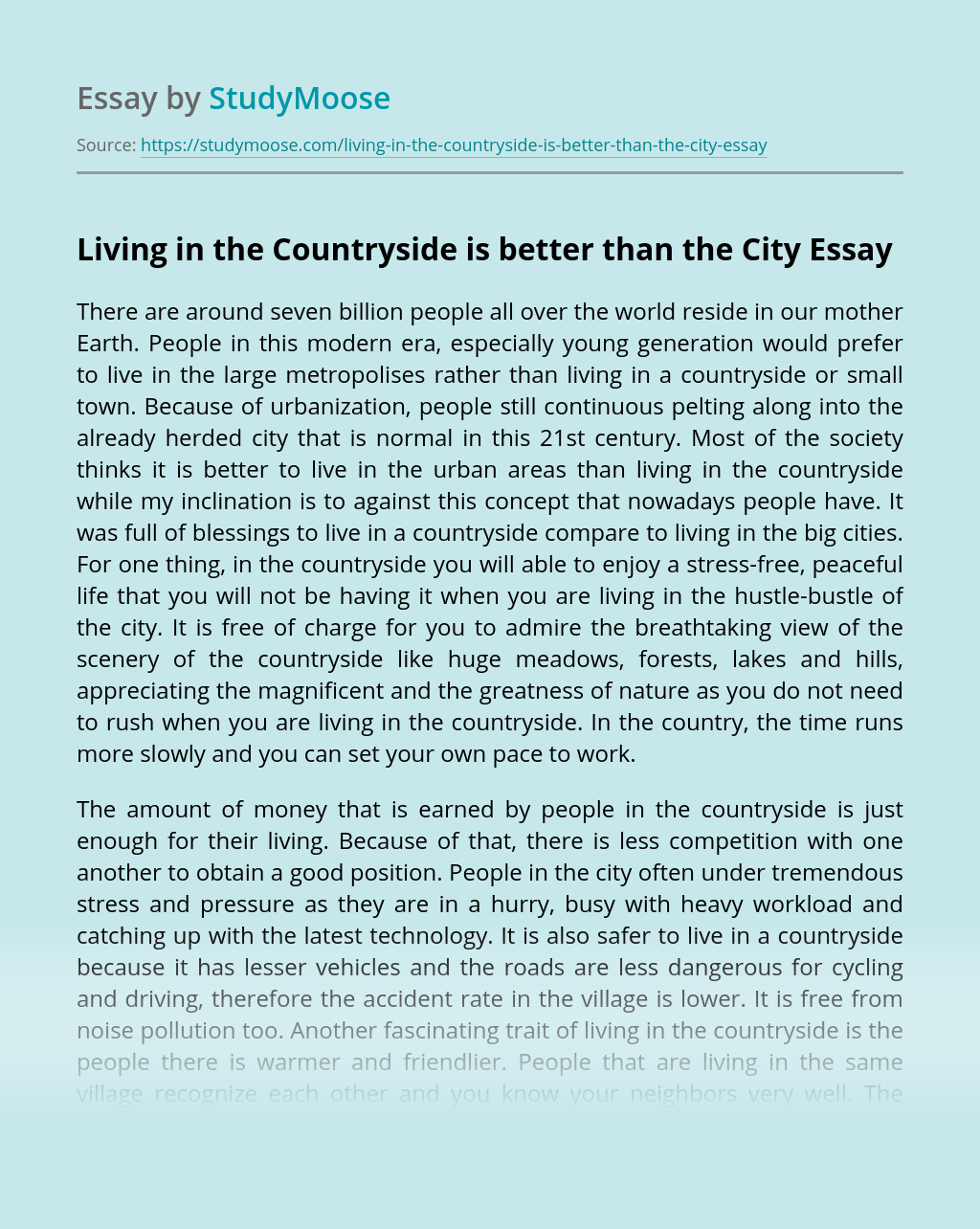 Turn in your highest-quality paper
Get a qualified writer to help you with
“ Living in the Countryside is better than the City ”
Get high-quality paper
Helping students since 2015
Stay Safe, Stay Original