In Romeo and Juliet, the two noble houses (Montague and Capulet) have a long-lasting feud between their families. The readers don’t know the cause of this feud, however this feud is easily reflected as a caste system, with; the strict rules, parenting styles, religious beliefs, and the environment. The varied differences between the nobles represent a caste system and the differences between the two in Romeo and Juliet, all lenses given are used in a varied way to reflect this caste system, giving the reader a more in-depth concept of the play.

Don't use plagiarized sources. Get your custom essay on
“ Romeo and Juliet Literature Analysis ”
Get custom paper
NEW! smart matching with writer

In Romeo and Juliet there are many differences between the two nobles reflecting a strict caste system. Both nobles are shown having no choice but to be the name they are and have been given since birth. A caste system enforces,” the upper and lower castes almost always lived in segregated colonies… and one could marry only within one’s caste’’ (BBC News). In Act 1 scene 1 page 12 Tybalt states,” I hate the word, As I hate hell all Montagues, and thee.

” This shows how Tybalt the Capulet is extremely strict to being his name. With Capulets being reflected as the higher caste this is shown in this quote through the Capulet being extremely to his name while Benvolio a Montague says in Act 1 scene 1,” I do but keep the peace. Put up thy sword.” Showing Montague is a lower caste due to Benvolio being okay with keeping peace unlike Tybalt. “Members of different castes are not even eat with one another” (hays).

This shows the fact they are a caste system because Romeo and Juliet house name can’t be changed or put with another house. In Act 2 scene 2 Juliet says, ‘What’s in a name? That which we call a rose BY any other word would smell as sweet.” This is Juliet saying how even her name or caste is that which she can’t change she is in sorrow because she has to stay to her name since her love is another name reflecting how strict the caste of their nobles are. This is just one strict rule of many in a caste being reflected by the two-noble house.

Another extremely strict rule of a caste is religion. In the play Juliet is seen as religious while Romeo is not seen as religious. Upper castes are very religious and seen as connected to gods they spend much time worshiping and the lower caste is not allowed to worship with them and they aren’t given much access to churches. In one instance, a boy went to break the taboo because he wanted to worship at a holy place but he was stopped because he was warned there would be a fight between the castes(Wral.). This shows how Romeo could be seen as a lower class of a caste because he has less belief in god. In the balcony scene Romeo says; “By love, that first did prompt me to inquire. He lent me counsel and I lent him eyes” This is Romeo not relying in god or fate but more of an emotional response; while Juliet says;” At lovers’ perjuries, They say, Jove laughs.” This is Juliet referring to a god when it comes to a decision. Juliet is seen quoting god many times when Romeo is seen challenging against a god. This shows the differences between the nobles and the caste system level they reflect.

Juliet’s parents and Romeo’s parents are extremely different in the way they raise their parenting styles in a caste system parenting is a very important aspect. Juliet’s parents are seen as authoritarian parents which are parents who make rules and strictly enforce them without any regards for the child’s opinion or emotions(Morin)reflected in her dads dialogue, ‘get thee to church o’ Thursday, or neve after look me in the face” This shows her father’s firm attitude towards her actions. Like in a caste system the parents are supposed to be extremely strict and disciplinary(Ormeno). This reflects how her parent’s actions describe a caste system and how strict her parents are. With Romeo’s parents they are carefree and just send his friends to do the work for him this exhibits a Permissive parenting style which is parents who only step in when there is a serious problem with very little consequences for actions (Morin). Romeos father says, ‘Could we but learn from whence his sorrows grow”. Indicating that there in fact is a caste reflected and in place with strict rules on many lenses.

Another common exceedingly strict rule in a caste is marriage. This entire story is between the twos requisite to marry each other. In a caste system man must marry in their caste no matter what while women are occasionally allowed to marry higher class men (Wade). In the play Juliet’s mother says,” Here in Verona, ladies of esteem Are made already mothers”. This displays a caste system because Juliet is expected to be married not only married but to be seen as esteemed. Later her father states,” Doth she not count her blessed, Unworthy as she is, that we have wrought So worthy a gentleman to be her bride?” This shows how her father believes she isn’t worthy of the man she is intended to marry but wants them to marry because the is seen as higher and more worthy. Just like in a caste system where women are marrying higher for their families to become more esteemed and respect (Davis). The evidence and details connect together to show that there is a caste system in between the two noble houses in context.

However, when many people read the story of Romeo and Juliet the first interpretation readers believe is a gender lens. This lens is one very strong one but it’s one very small interpretation of the play when there are so many other ways to view it. Even the female characters use vulgar language for example when the nurse said,” Thou wilt fall backward when thou hast more wit”. Displaying that gender is not the only way to view this story. Also, Romeo is shown as having more “female” like qualities invalidating evidence as the strict gender separation. Resulting in the broader way to view this story with a less strict but more valid interpretation. 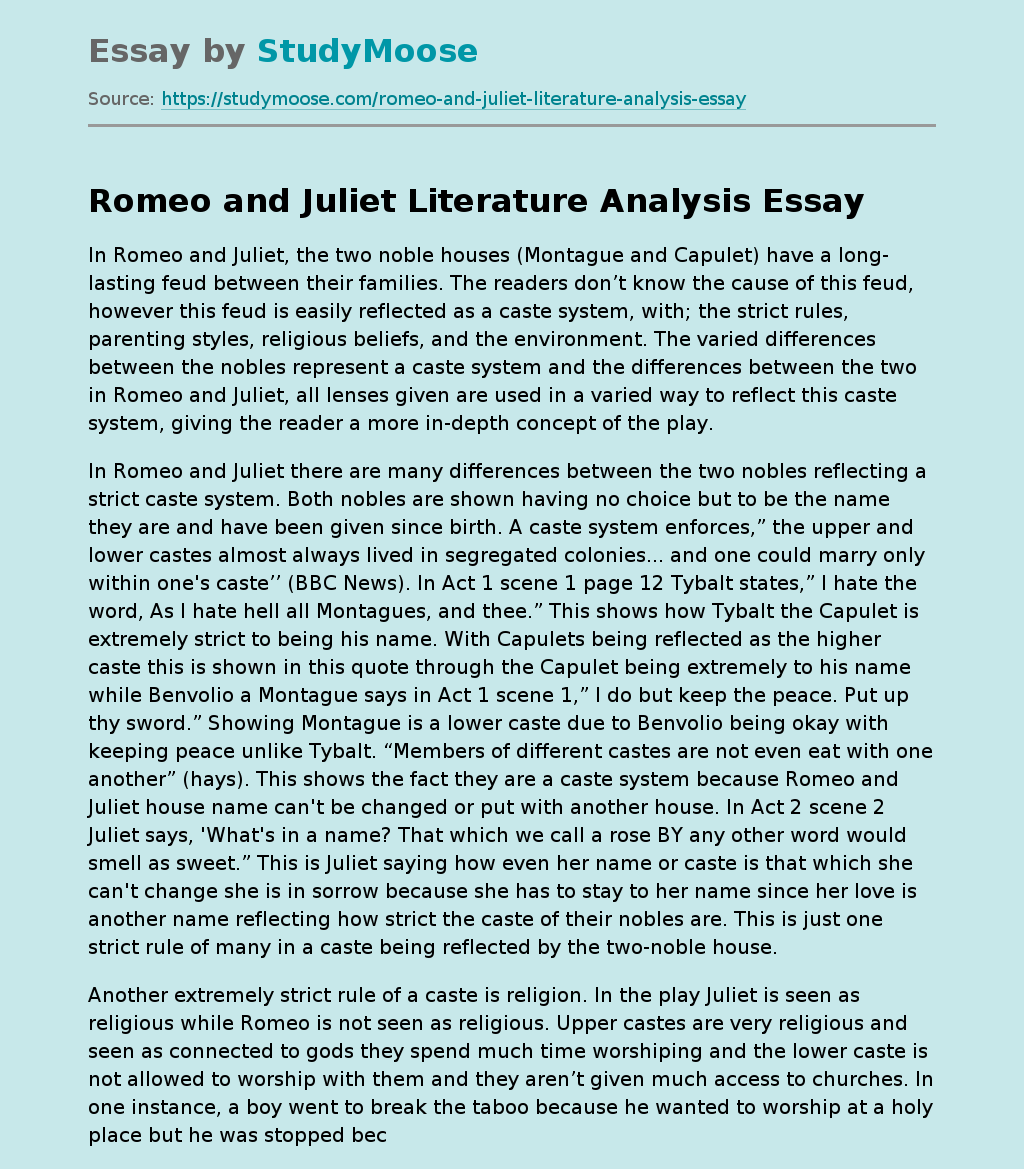