Romeo and Juliet: Are they in love?

Four centuries have passed since William Shakespeare’s Romeo and Juliet was first performed; yet it is still a controversial question to ask: are Romeo and Juliet truly in love? True love is when you would risk anything just to be with that one special person; it’s when you see them in their ugliest moments and still want to love and please him or her no matter what. Based on Aristotle’s three levels of friendship, Romeo and Juliet’s relationship certainly does not start at complete love; instead, it gradually develops into it over the course of the play.

Don't use plagiarized sources. Get your custom essay on
“ Romeo and Juliet: Are they in love? ”
Get custom paper
NEW! smart matching with writer

Along with their changing relationship, Romeo and Juliet are also beginning to grow up. And by the time of their deaths, they’re willing to give up anything and everything to be with each other.

The lowest form is utility friendship, a relationship based solely on reason while disregarding emotion and whether or not the two parties enjoy each other’s company. The next level is pleasure friendship, the exact opposite of utility friendship. It’s a relationship based only on mutual enjoyment and emotion, specifically passion, while ignoring whether or not either party will gain something beneficial from the other.

Finally, there’s complete friendship, the highest level achievable. It combines both utility and pleasure but instead of existing for each other’s sake, each party cares about the other for their own sake. William of Ockham also adds a third element to Aristotle’s complete friendship, will. He explains “that will ‘commands the inferior powers, including reason… [and] moderates one’s passions.’ Since the will has power over both reason and passion, it need not value things for the sake of utility or pleasure. The will is free to value things for their own sakes” (Milavec and Kaye 180).

With the addition of this third component, true love comes to be about reason, passion and the will to love someone just because. The beginning of Romeo and Juliet’s relationship is mainly based off of reason. Before the Capulet party, Juliet admits to her mother and nurse that she has given little thought about marriage. The upcoming party will be Juliet’s first and on her mother’s request, she is to decide if she likes Paris, a young count seeking for her hand in marriage. With the previous discussion fresh in her mind, Juliet spots Romeo. Upon seeing him, she’s instantly attracted to him and moments later decides that Romeo “is the god of my idolatry” (II.ii.115). Romeo is evidently beneficial to Juliet because he’ll provide a new husband that she’s actually attracted to. As for Romeo, he had just gotten rejected by a girl, Rosaline, and decided that because she wouldn’t have sex with him, she didn’t love him. At the sight of another prettier girl, Juliet, he completely forgets how depressed he was about Rosaline’s rejection and becomes enamored with Juliet. He’s basically on the rebound and decides that Juliet is much better in terms of beauty, “For I ne’er saw true beauty till this night” (I.v.54).

Juliet is useful to Romeo as he gets over his “love”, which is most likely infatuation, for Rosaline. As Romeo and Juliet’s connection grows; their relationship changes from utility into pleasure, introducing passion. In the beginning of the play, Romeo believes that while he loves Rosaline, she doesn’t love him. The rationale behind that was because Rosaline wouldn’t sleep with him, when in reality, she had sworn to be sexually abstinent. But on the other hand, Juliet is willing to have sex with Romeo, as long as their married, “If that thy bent of love be honorable, / Thy purpose marriage, send me word tomorrow (II.ii.144-145). At the time, Romeo and Juliet are not thinking with reason, but with their emotions instead, distinctly showing a pleasure friendship. By the time both Romeo and Juliet commit suicide, the star-crossed lovers are definitely in love. As mentioned before, to be in love you must have reason, passion and also will, the force that makes you do something without reason or passion. After Romeo is banished from Verona, he soon falsely learns that Juliet is dead from Balthazar.

Forgetting about his banishment and his punishment if he were caught back in Verona, he buys a vial of poison and heads to the Capulet monument. Without thinking with reason or passion, he sees Juliet lying on a tomb, supposedly dead, and drinks the poison. Once Juliet wakes up, she quickly notices Romeo’s dead body and stabs herself with a dagger, refusing the thought of living without him. Both characters act solely on will, overlooking any reason or passion. At the start of the play, Romeo comes off as extremely shallow, only worrying about looks while Juliet is exceptionally young and naïve.

Rosaline’s purpose in the entire play is to show how much Romeo changes. Romeo’s constant talk of Rosaline in the beginning of the play is mostly him wanting to be in love than him actually loving her. But when Romeo and Juliet meet, Romeo casts away his superficial thoughts of love and learns what love truly means, caring for someone for their own sake. He goes so far as to risk his life by going back to Verona just to see her. Juliet, once a naïve child knowing little about love, also grows up quickly. She does everything in her power to remain true to her husband, even overlooking the fact that he kills her cousin, Tybalt: But wherefore, villain, didst thou kill my cousin?

That villain cousin would have killed my husband.
Back, foolish tears, back to your native spring.
Your tributary drops belong to woe,
Which you, mistaking, offer up to joy.
My husband lives, that Tybalt would have slain,
And Tybalt’s dead, that would have slain my husband.
All this is comfort (III.ii.100-107)

Another change in Juliet is her beginning to disobey her parents. In the beginning, Juliet does everything her parents ask for. But because she loves Romeo, Juliet is prepared to deny and change her identity just to be with him. Throughout the entire play, Romeo and Juliet are both willing to give up anything and everything to be with one another. All they want to do is be with each other and to please the other, even to the point of death. Juliet openly tells Romeo in the balcony scene how much she loves his company and even before they were married, Romeo says:

But come what sorrow can,

It cannot countervail the exchange of joy
That one short minute gives me in her sight.
Do thou but close our hands with holy words,
Then love-devouring death do what he dare;
It is enough I may but call her mine” (II.vi.3-5).

Romeo apparently doesn’t care if they’re dead or not, as long as they’re together. Juliet also explains her happiness of her love for him saying “My bounty is as boundless as the sea, / My love as deep; the more I give to thee, / The more I have” (II.ii.134-136). It is quite clear that neither Romeo nor Juliet think that they can live without one another.

While love seems to be a good thing, it’s often painful, causing many problems. For Romeo and Juliet, their love for each other was their ultimate demise. Living without the other was so unbearable that they both had to commit suicide. Based on Aristotle’s three levels of friendship, Romeo and Juliet’s relationship starts out as utility and grows into pleasure and finally into complete love. During Romeo and Juliet, both main characters mature rapidly over a small span of time, merely five days. And while it’s hard to believe that two young lovers could fall in love so quickly, Romeo and Juliet were definitely in love. It took both of their deaths to finally mend the Montague and Capulet feud because in the end, love conquers all.

Romeo and Juliet: Are they in love?. (2016, Mar 17). Retrieved from https://studymoose.com/romeo-and-juliet-are-they-in-love-essay 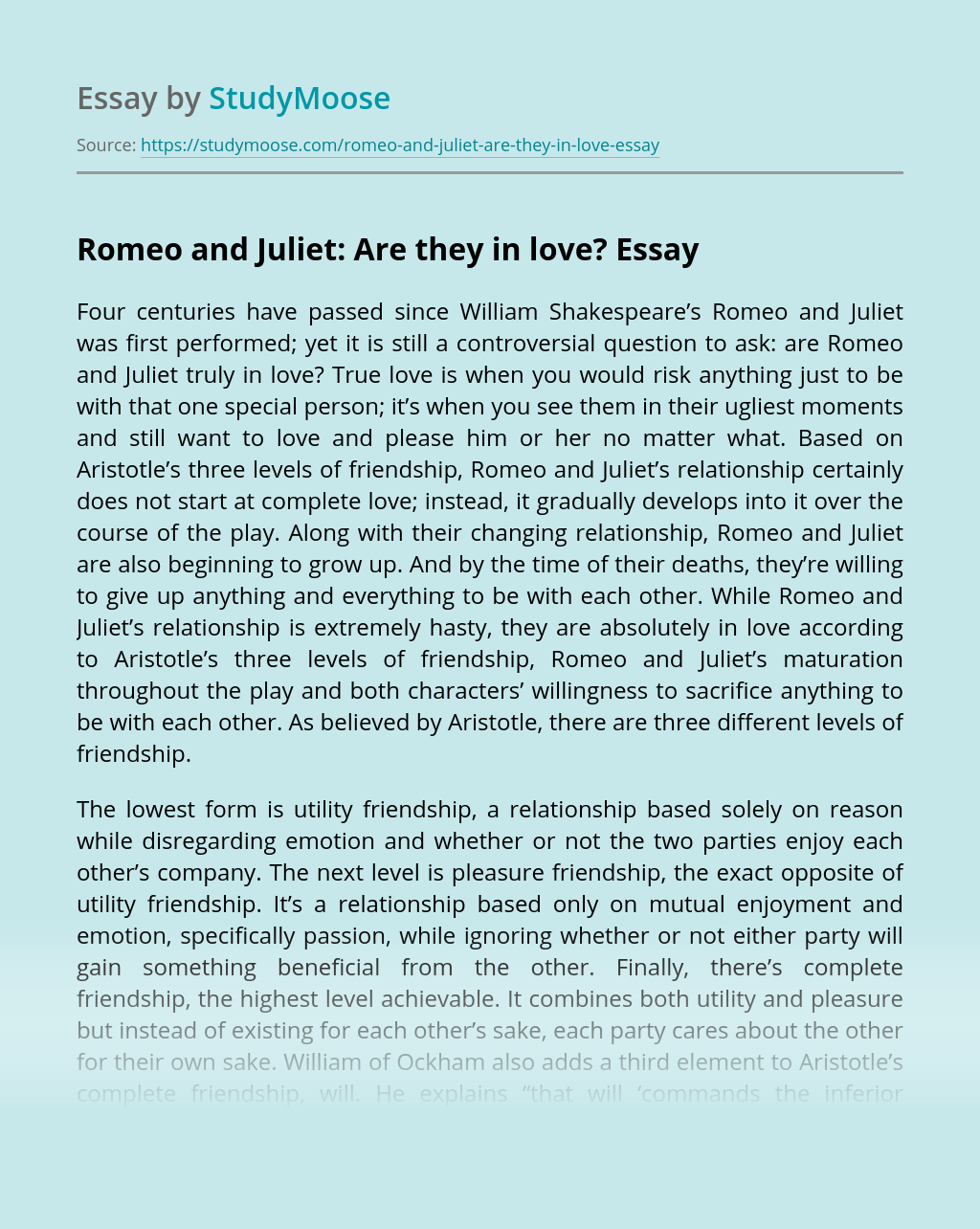