Role of Technology in National Development

In 2012, the United Nations added goal 17 to its 17-millennium development plans. 1 The 17th developmental goal plans to, “revitalize the global partnership for sustainable development” as well as target and combat a, “[need] for identifying technology facilitation mechanism.” This plan recognized the necessity to create a more mobile society with a higher level of technology worldwide with a strong emphasis on cell phones and communication.

Technology includes medical, developmental, software, infrastructure, and overall scientific achievements worldwide. 3 As we progress further into the 21st century, along with it and all of its technological advances follow.

Don't use plagiarized sources. Get your custom essay on
“ Role of Technology in National Development  ”
Get custom paper
NEW! smart matching with writer

In order to become a more civilized, and universally adapted society, it is important to continue striving for technological advancements. Medical grade technologies have been on the rise and have determined life-saving cures for some of the most pressing, common diseases in developing and modern nations. Through technology, cures for widespread diseases’ are now possible. Control over the spread of Malaria throughout Africa and other developing nations is now possible.

Proficient in: Impact Of Technology In Education

4 Some of the most necessary medical devices for saving millions of lives consist of 3D printers to make umbilical cord clamps, prosthetic limbs, and other life-saving treatments. 5

Technological advancements are a key role to national development. For the necessity and benefits of technology in national development, the list goes on and on. It enables proper schooling, buildings, healthcare, and communications to function.6 Technology is anything from a blood transfusion, to a MRI, to a call home. All is beneficial to society and therefore should be implemented worldwide. Medications and stem-cell research are now attainable through modern-day technology.

So why aren’t they implemented everywhere? The cost.7 Shipping technologies is costly and hard to do; the machinery in which needs to be shipped it expensive itself. But, there is hope.

A surprising amount of people in Africa have cell phones. A median of 80% across all seven sub-Saharan African countries said they use iPhones to send a text message and 33% of people in South Africa stated that they owned cell phones as of 2002.8This amount of people totals up to about 25 million people using mobile cell phones throughout South Africa, with the proliferation of these cellular devices only growing 9. Despite the fact that landlines are hardly ever existed in a majority of rural areas, a wide majority of people can still send a text message. This is because they have been able to skip the stages of landlines and jump right into mobile device carriers. As a matter of fact, in all of Southern Africa, the median percent of all people that have access to a landline is a megger 2%.

Denmark supports and has funded efforts in hopes of expanding technological advances throughout the world. Denmark is the country founder of the TechPlomacy initiative, a government organization formed in 2007. TechPlomacy states that, “TechPlomacy is an acknowledgment of the key role that technology and digitalization plays and will increasingly play in the future for individuals and societies alike 11.” Denmark understands the importance of technology in modern and developing nations and will continue striving towards technological improvements and advancements. With rapid technological growth, comes a stronger need for cyber security.

Denmark is one of the world’s most technologically developed nations in the world. They have been striving for technological advancements, and it has paid off. Denmark has an innovation strategy that focuses on research, innovation, and education, targeting the needs of the overall country and people of Denmark. This is supported through Denmark’s 2015 plan which focuses on, “Growth and development in the whole of Denmark.” Denmark has been a strong supporter of technological advancements of cleaner energy, focusing mostly on wind energy. By 2030, Denmark plans to be at least 50% reliant on renewable energy sources.14 Through Denmark’s striving towards technological advancements, they hope to become one of the cleanest, safest, and most transparent nations.

Role of Technology in National Development . (2021, Dec 08). Retrieved from http://studymoose.com/role-of-technology-in-national-development-essay 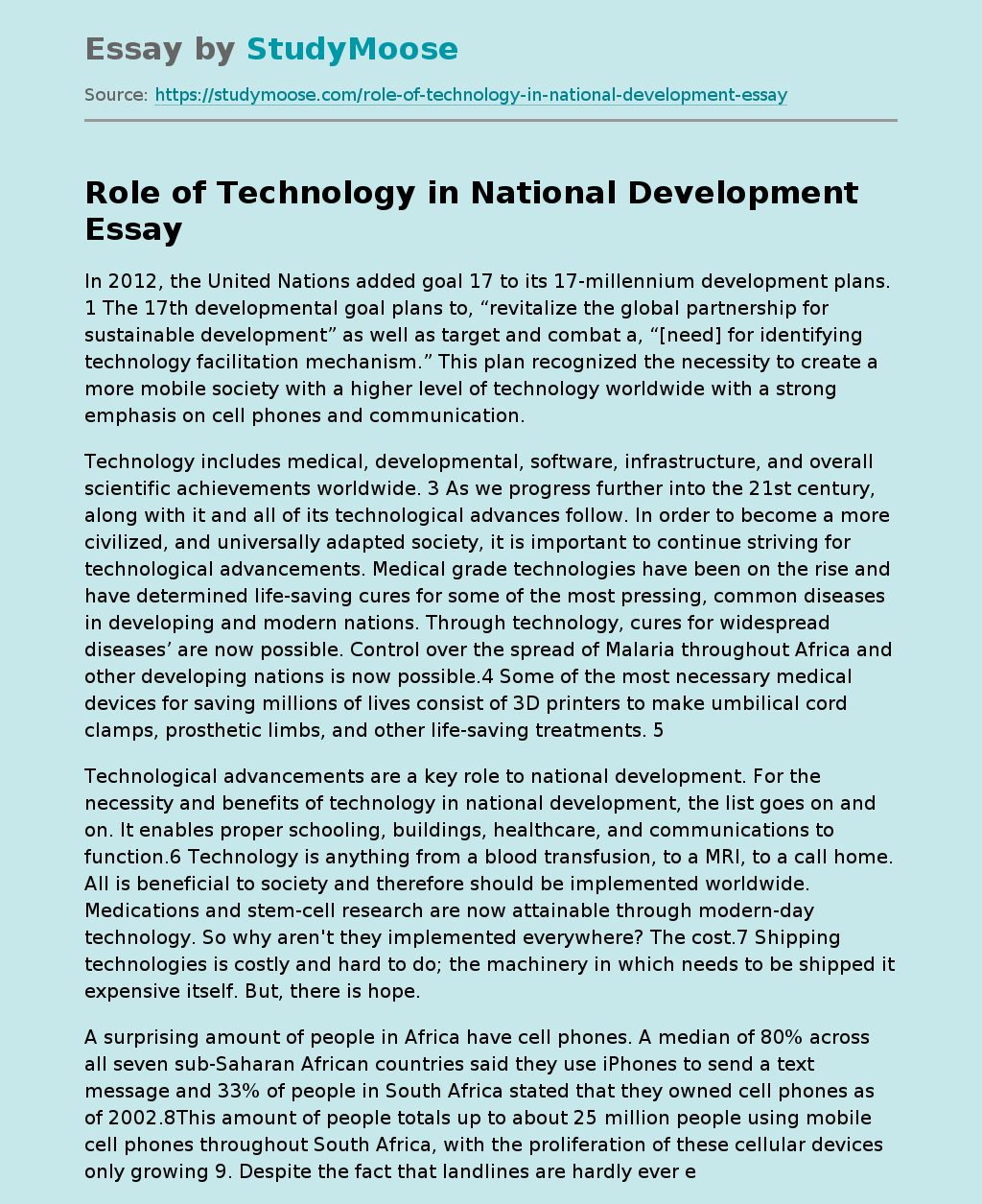