In a world dominated by technology, it can be difficult for a person to distinguish between the meaning of ‘good technology’ and ‘bad technology’. The question which makes this categorization so hard is, what is it that makes technology good or bad? Is it the technology itself that makes it good or bad or is it us, the users? Technology is a most wonderful and marvellous thing. It can be found in just about every aspect of our everyday lives.

Don't use plagiarized sources.
Get Your Custom Essay on Good Technology Vs. Bad Technology Just from $13,9/Page

Everything from an alarm waking us up, to using an electric toothbrush or razor, or driving a vehicle utilizes technology in some way. Technology is all around us and will be for the rest of time.

Technology, like most everything in this world, has its upside and its downside. The upside can be seen as the technological good. Advances in the technology field allow us to accomplish things much more easily than ever before.

The recent release of the new IPhone is an excellent example of just how much we are capable of accomplishing with technology. With this gadget that fits in your hand, one is capable of not just making phone calls around the world but also sending text messages, e-mails, browsing the internet, listening to music, and taking pictures among many other functions of the IPhone. And with the applications that are available to be downloaded to the handheld device, a homeowner can now do such things as controlling the temperature in their home, or even locking/unlocking the doors when they are out of the house. The many functions of this gadget are simply amazing. In a way, when using a smartphone device such as the IPhone, one can complete just about everything they would do in their day to day life and it’s all at their fingertips. But beneath the glamour of these devices, there lies the horrible downside. One downside which has been in the media for years now is the problem of people not getting enough physical activity.

With just about everything at our fingertips in one of these devices, means that we can be lazy. We don’t have to get up and go to the bank anymore to pay bills or transfer money; we can do it on the phone. Instead of kids getting up and going outside to play, they can now sit and play games at their fingertips and connect to such social media site as Facebook and Twitter to play against their friends. They can also watch movies, or read books along with playing any game that is available. These things can all be done by sitting in the comfort of your own home without having to get up and be physical. This is a prime example of how ‘good’ technology can be dangerous. Without physical activity the human body is not able to burn as many calories as it should and can lead to a person gaining body fat. This body fat can affect many different aspects of the human body, everything from the heart, respiratory system, joints, and even a person’s mood. These effects can possibly lead to a premature death of a person if they are not healthy. It is not the IPhone which can make a person become lazy, but it is the user. One must know their limit of how much time to spend using the gadget.

In today’s world, a large amount of technology can now be found in vehicles. Temperature settings, door locks, windows, cameras, are among the many things that are run by technology in many of today’s vehicles. Such advances make riding in a vehicle more enjoyable, comfortable, and safer. For example entertainment systems are now being installed in vehicles for those long drives to help keep people entertained and to make it seem as if the time is passing quickly. The passengers are able to watch a movie through a DVD player on their own personal screen. Some vehicles even contain hookups which allow game consoles to be played. New temperature controls mean that that there can be a separate temperature on each side of the vehicle for the driver and passenger. This means that there is no more fighting over the controls if one person is too warm and the other is too cold. Everyone can be comfortable with their own climate controlled settings.

A new and emerging safety feature is something called park assist. This feature helps when people prepare to parallel park the vehicle and works with sensors that are mounted around the exterior which allows the vehicle to do the parking for you. The driver doesn’t even have to touch the wheel. One can also buy vehicles that have a camera mounted on the rear end, when reversing, the screen which is found in the centre console switches to show a live feed of what is behind the vehicle. This helps the driver to make sure that there is nothing behind the vehicle, especially in the places that cannot be seen in the mirrors. Along with these safety features, automatic locks have now taken over manual locking doors. The way that automatic locks function varies from car to car. In some cases, once you put the vehicle in to gear the doors lock, in others it happens when you reach a certain speed and in some the driver or front passenger has to push a button to lock all of the doors. All of these features allow us to feel more comfortable and safer. But is it truly best to have so much technology within a vehicle?

There have been instances when in emergency situations, such as after having been in an accident, the doors will not unlock due to the technology. This can be very dangerous when it happens in a life or death situation. If the doors are unable to be unlocked, it can take rescuers a longer amount of time to get into the vehicle and help the victims. And in such a situation every second is critical. Airbags are another very important safety feature but due to advancements in technology, do not always function correctly. Upon impact, the airbags in a vehicle are meant to deploy so as to allow the driver and passenger to hit a cushion when thrust forward instead of hitting the steering wheel and dashboard. However, with the advances in technology there are sometimes problems with the sensors which do not allow the airbags to deploy upon impact. This can cause serious injuries and is an excellent example of how what we believe to be ‘good’ technology, actually being dangerous to us. In these two examples it is not the user which makes the technology ‘bad’, but it is the technology itself as it is unreliable since it may not function properly when it is most needed.

The categorization between ‘good technology’ and ‘bad technology’ ultimately depends on what the technology is being used for and how it is being used. In some cases, such as the IPhone, when using it too much can potentially make a person lazy, leading to decreased amounts of physical activity, is the user themselves. The IPhone could be categorized as being good because of what it allows the user to do, but also bad since the user can become engulfed by it. However in the case of the technology in vehicles not functioning properly all of the time, this is not caused by the user. It is the technology itself which makes it good or bad and in a world becoming dominated by technology, it will forever be a battle between whether it is the technology or the user which can make something that seems good, be dangerous. 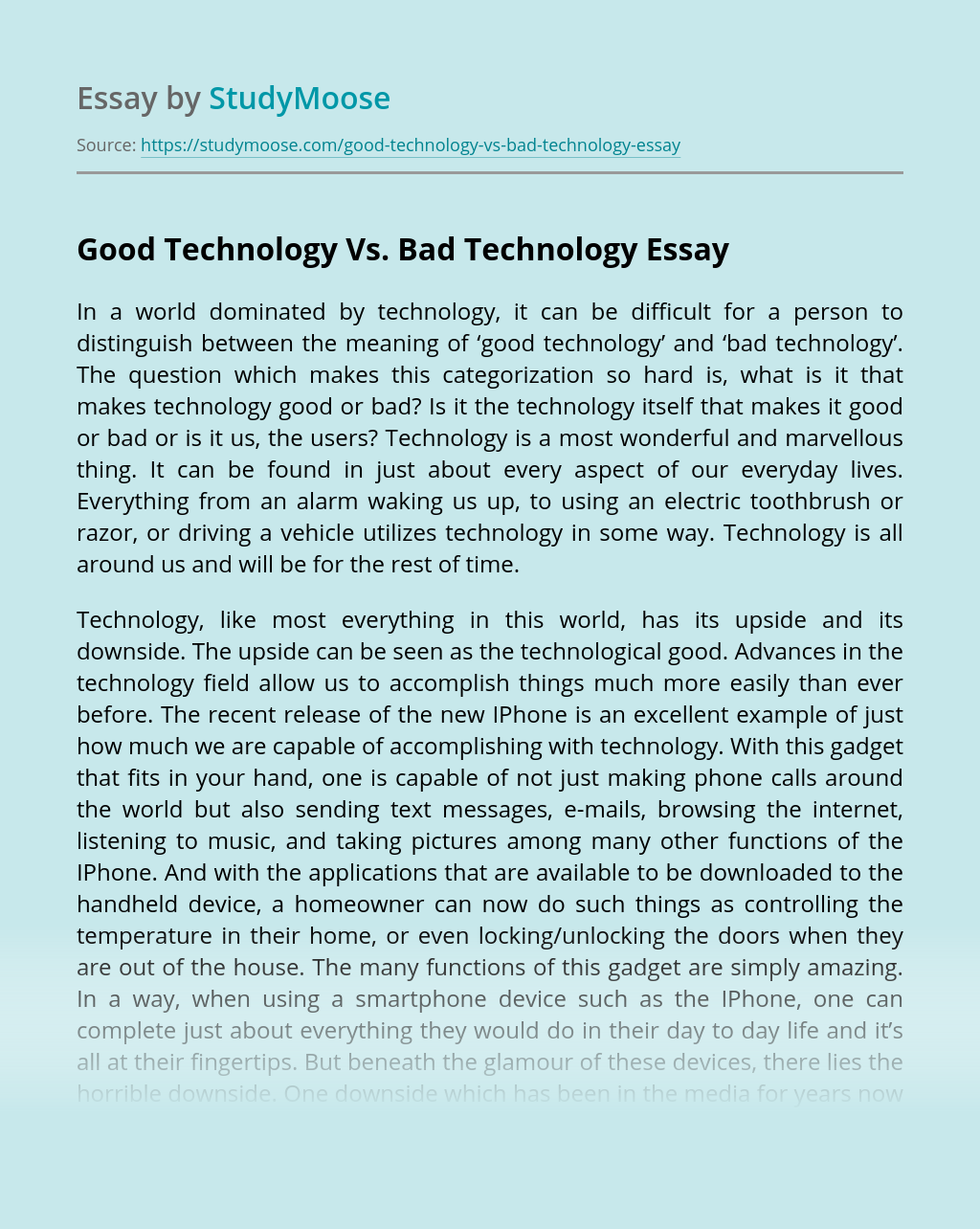 S.P.I.C.E for the Shang Dynasty

Rate this post * In the Shang Dynasty the highest on the social ladder was definitely the Royal Family and the aristocracy (chief landowners that often served as officials). * Warriors also held a very high power. * A majority of the people during the Shang Dynasty were peasants who worked for the aristocrats. Also...

Rate this post Introduction The abbreviation CRM is Client Relationship Management and defined as it is a process to create a solid relationship with the customer and to know all the more about the client needs. Stronger associations with the clients will help in the improvement of the business. Don't use plagiarized sources. Get Your...

Rate this post Introduction This report has been prepared to cover a project requirement for Decision Management within the grounds of ‘New Developments in Management’ and in response to the following; “The past 15 years have seen a series of new developments within management accounting to meet the ever changing needs of the organisation in...

Rate this post Attention: Mr. Donald Douglass and Mr. Ronald Abrahams, as well as all stockholders for U Driver Transport. After much research and evaluating of information pertaining to the country of Australia, I believe that Australia will be an impeccable candidate for the next location for Global Expansion for U Drive Transport. There are...

Rate this post This device is important as it helps with the presentation of Bill Sikes, as it emphasises the different actions which he carries out when killing Nancy, it suggests how determined he is on expressing his anger and asserting his authority. One of the last lines which Sikes says to Nancy is “You...