The prevalence of social injustice had caused an extensive increase in sicknesses and untimely death in developing countries. The upsurge of disease and death as the product of social injustice is allied to insufficient public health services, medical care, other internal and external influences. (Levy, Victor & Sidel, 2005). What constitutes the internal issues are, extreme poverty, extensive discrimination against women, native people, racial and ethnic minorities, the physical and mental incapacitated, and other susceptible groups. (Levy et al., 2005). Additionally, there have been unaccountable governments, prevalent corruption, and failure to defend human rights.

Don't use plagiarized sources. Get your custom essay on
“ Role of Social Injustice in Global Health Program ”
Get custom paper
NEW! smart matching with writer

Most of the external influences are results from regulations of developed countries, universal businesses, and financial organizations operating transnationally. (Levy et al., 2005).

Developing countries have low incomes, excessively colonized and high reproduction rate. There is a big difference between the lifestyle of the rich and the poor in developing countries. Most people in developing countries cannot even afford necessities such as, food, clothing, shelter, and health care. (Levy et al., 2005). All poverty is typically due to social injustice. This has a big effect on health because of malnutrition, limited means to therapies and preventive health services, and exposure to health and safety risks.

A specific group of populations that have suffered and still suffering from social injustice is African Americans. The reason why African Americans are most likely to be unhealthy is mostly due to social injustice all over the country. There is no doubt that the first African Americans who entered the soil of America suffered a great deal under the oppression of their white masters. Some of the blacks died due to severe oppression and those who were able to make it to America were still maltreated and regarded as slaves.( Noonan, Velasco-Mondragon, & Wagner, 2016) .The enslaved African Americans had no choice but to live in very poor physical, social, and mental health conditions which had adverse infect on their health. Even though slavery was ended 150 years ago, African Americans are still suffering from discrimination and domination. (Noonan et al., 2016). To make things worse, African Americans have little or no say on policy and activities that can modify or eradicate intolerable health disparities.

Discrimination and other forms of structured inequity weaken America’s chance of becoming the healthiest nation. (American Public Health Association (APHA), 2019). According to APHA (2019), “30 percent of direct medical costs faced by blacks, Hispanics and Asian-Americans can be tied to health inequities.” (p. 1). Due to unequal access to healthcare and other preventative sources such as counseling, these groups of people normally have worsened health conditions when they do discover a source of care and acquire more medical costs. (APHA, 2019). According to research, health care providers exhibit bad attitudes to black people. They display unconscious prejudice that hinders good communication and substandard care. Public policies such as “tough on crime” and “war on drugs” have sent a lot of African American and Hispanic males behind bars. This discrimination and injustice weaken the social and communal harmony that is so important to “public health, narrowing opportunity, disrupting families and social cohesion, and preventing civic participation.” (APHA, 2019, p. 1). Furthermore, nearly half of the US states have established new regulations that make it tougher for voters to access the ballot box.

There is a lot of research on intergroup racism but there is a little study conducted on intragroup racism. It is appalling to find out that black people differentiated against each other based on skin shade and hair type. It was believed among African Americans that those with darker skin were inferior to those with light skin tone. Also, African American societies, unions, business and social organizations, religious affiliations, old Black institutions, and academies typically disallowed blacks based on their color and type of skin. (Clark, Anderson, Clark &William, 1999). The above evidence has proved that racial prejudice exhibited by another racial group toward blacks and black on black discrimination still exist and have negative health consequences such as, emotional and psychological trauma on many African Americans. (Clark et al, 1999).

There are a lot of things that influence health which includes, racial, social, political, economic, ethical, cultural, and social justice issues. It is believed that racial difference offers some race advantages over the other race or ethical groups. Researchers have suggested that race is an indicator of health disparities that is not alleviated by age, sex, and educational background. (Noonan et al, 2016). Socially, racism is linked to poorer jobs, housing, education, income and means to health services. The danger that is involved are occupational risks, contact to toxic substances, allergens, inferior school system, unhealthy food, easy means to get illegal drugs and alcohol, violent neighborhoods, and environmental exposures. (Noonan, et al., 2016). According to Noonan et al., (2016), “Thirty percent of African Americans believe that their health is dependent upon fate or destiny and only about 50% feel that health is a high priority.” (p. 4). A small proportion of blacks can become high school graduates. Compared to blacks, whites are likely to graduate with bachelor’s degrees (32.5 vs 18.6%) (Noonan et al., 2016).

Poverty causes humans to lack the most necessary things needed to survive in life, such as hygienic water, nutrition, healthcare, clothing, education and shelter. There are a lot of evidence to include Noonan et al., studies, that the poorest ethnic group in America are African Americans. (2016). African Americans have had the “lowest median household income for the past 50 years: in 2014, measured at $35, 398, compared to $53,657 for all races, and $74,297 for Asians.” (Noonan, et al., 2016, p. 4). Poverty is the best indicator for poor health consequences, high morbidity, and mortality all over the world including United States. Health problems such as diabetes, obesity, low birth weight, increase lead in the blood occurs commonly among poor people. (Noonan et al., 2016).

Some people who live in poor communities have no means of transportation, therefore, they cannot attend health care services such as preventive care, until health status get worse. Healthy foods are scarce to get in poor African American communities due to a lack of grocery stores. Compared to black neighborhoods, white neighborhoods have more groceries with fresh fruits and vegetables. (Noonan et al., 2016). Lack of healthy foods in black neighborhoods has led to the prevalence of obesity and diabetes among African Americans. On the other hand, stores that sell alcohol are more in black communities.

African Americans tend to live closer to a Superfund toxic waste site that has a bad effect on health. Blacks who live in such toxic neighborhoods tend to have diabetes, hospitalized more, give birth to babies with congenital heart defects, nervous system defects, low birth weight, renal dysplasia, and more. (Noonan et al., 2016). Violence is also among the determinants of health disparities. Violence is the main source of injury, disability, and premature death among African Americans. Noonan et al. (2016) declare that “Black male adolescents are six times more likely than whites to die of homicide, and firearms are the primary method.” (p. 5). According to research conducted in 2009, black males were responsible for 60% of injuries due to firearms compared to 8% of whites. (Noonan et al., 2016) Also, young black males are 4 times more possible to die from a gunshot than their white peers. (Noonan et al., 2016).

Social injustice has been going on for over 200years in the United States and has been going on around the world since time immemorial. There are rules and regulations that can be reinforced to eradicate or minimize social injustice but there is an insufficient continuing obligation to successful approaches, and to the funds required to attain health equity. (Noonan et al., 2016).

It is very clear that the health of African Americans has not been important to political executives. African Americans should be in the financial and political places to guarantee the effective application of policies that promote social justice and equality. All health providers should be obligated to attain regular training in the delivery of unbiassed care. Young blacks should be encouraged to pursue health careers through scholarships and grants. The most effective means to address social injustice should start from the root of the problems. Addressing social determinants of health from poverty to the constructed setting, racial discrimination, violence, and incarceration, is possible to produce a better influence on black health than risk reduction programs. (Noonan et al., 2016).

Social injustice should be eradicated from American culture. This can be done if our policymakers make it an important issue and stick with it. It is everybody’s right to intervene if they notice any social injustice going on. There should not be segregations and the law should reinforce that. African Americans and other minority races should have the same right as the white race. 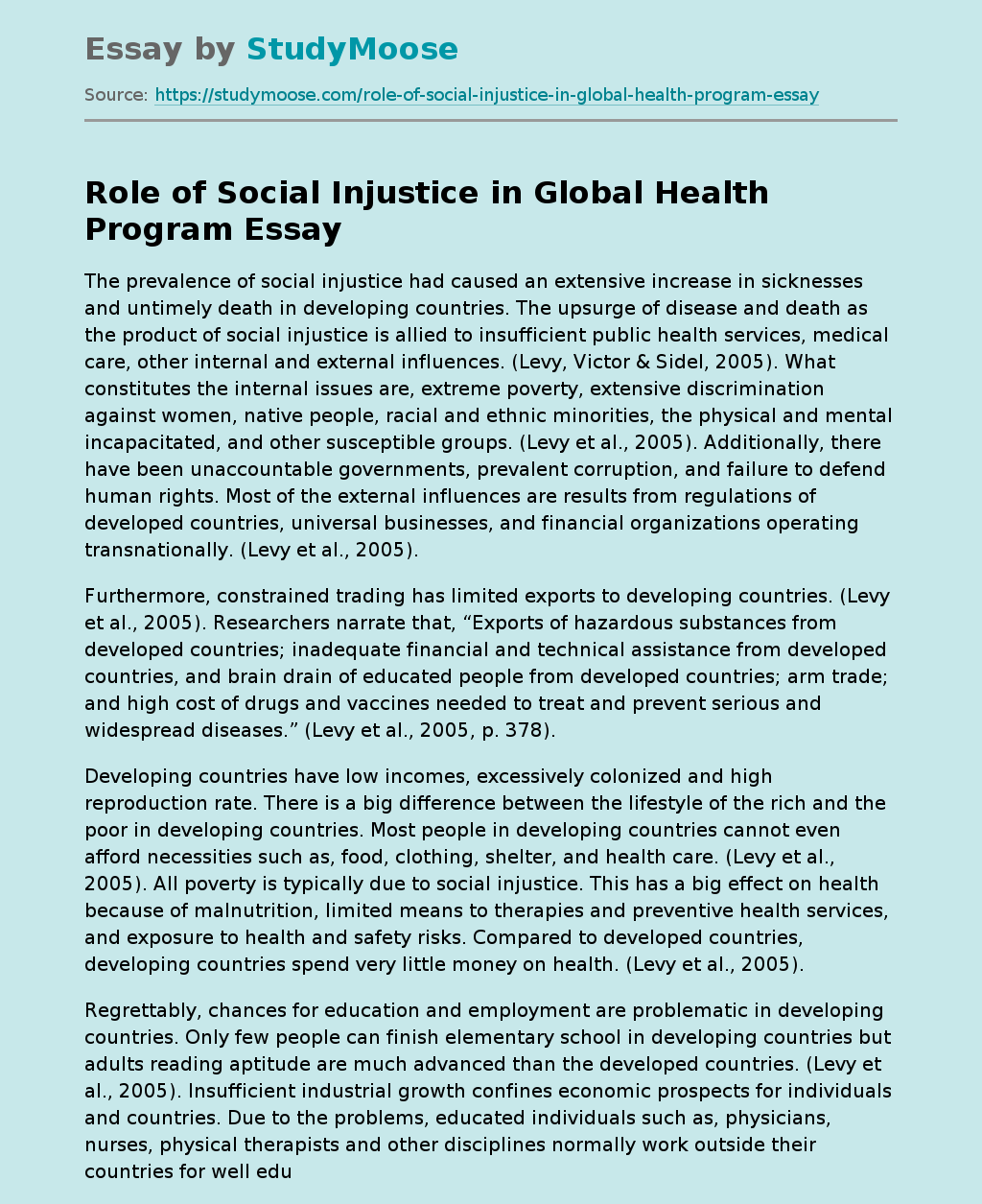