Role of Money as a Motivator

Motivation is defined as a process which account for a person’s intensity, direction, and persistence of effort toward attaining a goal. (S Robins, 2004) As an extrinsic rewards and one of the well known motivational techniques, money is proved to be a well-accepted motivator for a long history. It is normally reflected in pay rise, bonus or share option. It is an effective motivator but not in all cases. Drawing from some of the famous motivation theories, this article discusses from the individual employee’s perspective on different occasions and effectiveness of money as a motivator.

The study will focus on hierarchy of needs theory, expectation theory and equity theory to explore the interaction between a person and the environment with money motivator in place. The study is to shed a light on how to use money as a motivator better by analyzing employee’s level of needs, defining a healthy performance-reward system and paying attention to equity so as to draw a motivation plan accordingly in the real business environment in order to achieve greater performance from the employees.

Money usually plays an important role in meeting low-order needs for most people. So when identifying the employees as people desiring to meet their low-end needs, the managers can make good utilization of monetary motivations by offering handsome pay package to keep prod their better performance with higher intensity, continuous persistence and aligned goals with the organizational objective.

Behind these figures there is an important effect that the workers or the fresh students are not motivated enough in terms of their received payoff. This is particularly the case with the massive peasant workers escaping from the Pearl River Delta area. Their lower-order needs can’t be met given the low salary and high living expense in the area. What HR managers in those companies can do is either to improve their salary level to keep up with the workers’ low-order needs or to go further to western areas in China to find workers with lower-order needs.

When low-order needs are met, the desire to satisfy the high-order needs will come into being. At this stage, the needs are predominantly satisfied internally like by status recognition, self-fulfillment, achieving one’s potential and so on.

A noticeable point here is that both orders of needs are present at the same time in most cases, as per ERG theory. (S Robins, 2004) Here money motivator belongs to existence group to let an individual be well-off materially. At the same time Relatedness and Growth needs are also valid for an individual to maintain a good interpersonal relationship with colleagues and achieve self-fulfillment.

Supposing if money is missing, medals and extolment would be definitely in the shade though they are indeed indispensable, as Jack Welch said. Both Nobel and Pulitzer prizes come with huge amount of cash motivation. (Jack Welch and Susan, 2005). If money is not an important motivator at this stage, we can expect CEOs from companies of different levels having same level of payoff. But that is never the case. The payment has been tied together to their contribution to the companies’ development. People can get promoted as a proof of recognition, but if he receives same pay as his staff, we can expect him to be frustrated as if he was not paid attention to and may choose to resign, because at this time pay has been taken as a symbol of worth. (Ruth Bender, 2004)

2. Money is important but should be tightly related to performance to keep up with employee’s expectation.

There are two points which every person can easily understand. One is that there is a positive relationship between the effort one inputs and the individual performance one can expect out of the effort. The other one is that everybody joins an organization with a personal goal. The commonest way to meet the goal is to get rewards in the form of salary payment which is always attached to a specific position in the company.

On how to define a salary package for an employee, different companies take different approaches. For e.g. some bosses correlate the payment with longevity in the company, while some others prefer to correlate the payment with the employees’ ability in kissing up to the boss. (Steven Robins, 2004) Seems everyone knows that money is an important motivator here, but it is always neglected that the approach of using money motivator does matter in terms of how much the employee is motivated.

In HTL Furniture where I am working for, the Upholstery workers previously received their pay by working time. The productivity kept hovering at a low level. Soldiering can be seen everywhere on the shop floor. After the incentive scheme which relates the worker’s pay with their production performance was implemented, a significant jump by more than 50% in yield was seen in just one month. The incentive scheme includes a new performance evaluating method using following calculation formula and publishing individual’s performance on bulletin board on a monthly basis.

By the formula, a worker will pay adequate effort during production and get a good performance reflected in the value of Q, as he knows how the performance will be recognized based on the calculation above. After achieving a good performance he will be entitled to obtain a good pay according to the incentive scheme. Eventually it will serve meeting his goals in living a more comfortable life.

3. Money is still an important motivator but weakens as perception of relative pay plays a bigger role when there is referent to compare.

In a society where information flow becomes more open and effective, individual employee is easier than ever to get a referent to compare the ratio of input and outcomes, even though there is always a policy in most of the companies prohibiting the disclosure of salary information among colleagues.

According to the equity theory, employee will get a conclusion after comparing the relative reward, which equals to O/I (Outcome/Job input) ratio, of his own against that of the referent. Outcome here can be referred to as money motivator such as salary. The referent comparison can be made with his own experience in or out the current organization or another person’s experience in or out the current organization. When the conclusion obtained is inequity, either over rewarded or under rewarded, the employee will be differently motivated and adjust his behavior. (Steven Robins, 2004)

There is one point to notice is that perception, not reality, is key in equity theory. A person will not become less motivated unless he believes he was treated unfairly or underrewarded. (Carl F. Fey, 2002) A person will become more motivated when he belives he was overrewarded.

Basing on above argument, management can resolve the inequity concluded by an employee by helping the employee to understand that he may be comparing with a wrong referent. In a study reflecting interview with 35 individuals from 12 UK listed companies, the executives do relate their pay to that of their peers within the company and in other company. They considered the pay as fair. People agree that better-performing directors who perhaps have greater input deserve more pay. “It is the relativity that is important, rather than the absolute amount of pay”. (Ruth Bender, 2004)

It also helps to explain the high turn over rate of more than 20% and low motivation and satisfaction level in Taiwanese companies in mainland China as the employees there have perception of low relative reward. Taiwanese companies have been named as good training school but bad employer. (Liu Shan Shan, 2004)

In calculation formula ① in the previous cases with HTL upholstery workers, P (points of a sofa model) stands for the difficulty of upholstering the sofa furniture. It is adjusted regularly. When a new sofa model is introduced for production, the P is always high because it is more difficult to produce in the beginning. When workers got familiar with the upholstery of the model after two month’s mass production, the Q (quantity produced) will jump up. To reflect the actual difficulty level and to keep S (final score) stable, the P is supposed to be adjusted to a lower level. The higher P, the higher rewards can be received by the employee.

When the P is kept same without changing after two months, the employee feels overrewarded as he can produce more in same given time thus achieving higher score and receiving higher pay. The employee is highly motivated and chooses to improve the quality thus improve the outcome.

When the P is reduced to a lower level without prior communicating to the employee, the employee felt underrewarded. The shopfloor is turned into chaos. The employee is demotivated.

When the P is reduced but the decision to reduce is transparently made together with employees, though S will be driven down and ulteriorly affect the final reward, the employee chooses to increase the input so as to boost outcomes to keep O/I ratio consistent. Here there is procedural justice functioning. This will emphasize the fairness of process and promote OCB (organizational citizenship behavior).

When the employee find there is another neighboring furniture company offering same kind of computing but higher unit rewards per score, the employee chooses other-outside to compare. He will feel they are underrewarded after comparing with other-outside, there is a tendency for him to feel undervalued. Management need to have an exquisite sense of the change in the employee’s performance which might come subsequently after the inequity is found. To avoid human resource rolling out, the management will need to balance whether to just wait for the employee to quit and employee new staff, or increase money motivator, or increase other motivator to improve the outcome proactively to eventually increase the employee’s perception of increased relative reward.

Money is always an important motivator for people at all level of needs. Lower-end needs can be best met by money motivator. Higher-end needs will be met by intrinsic motivators like self-achievement but better satisfied when it is accompanied by Money motivator. Money is also an important motivator in the sense of performance-related payment when drawing from expectance theory. Money is still one of the important motivator to improve a person’s perceived feeling of equity, but may not necessarily be valid and should be manipulated together with other intrinsic motivators such as building better company culture, autonomy and achievement. The three theories are complementary to each other. In real business environment, managers should take all those situations into consideration aiming to achieve higher performance from the employee.

Role of Money as a Motivator. (2016, Jul 24). Retrieved from http://studymoose.com/role-of-money-as-a-motivator-essay 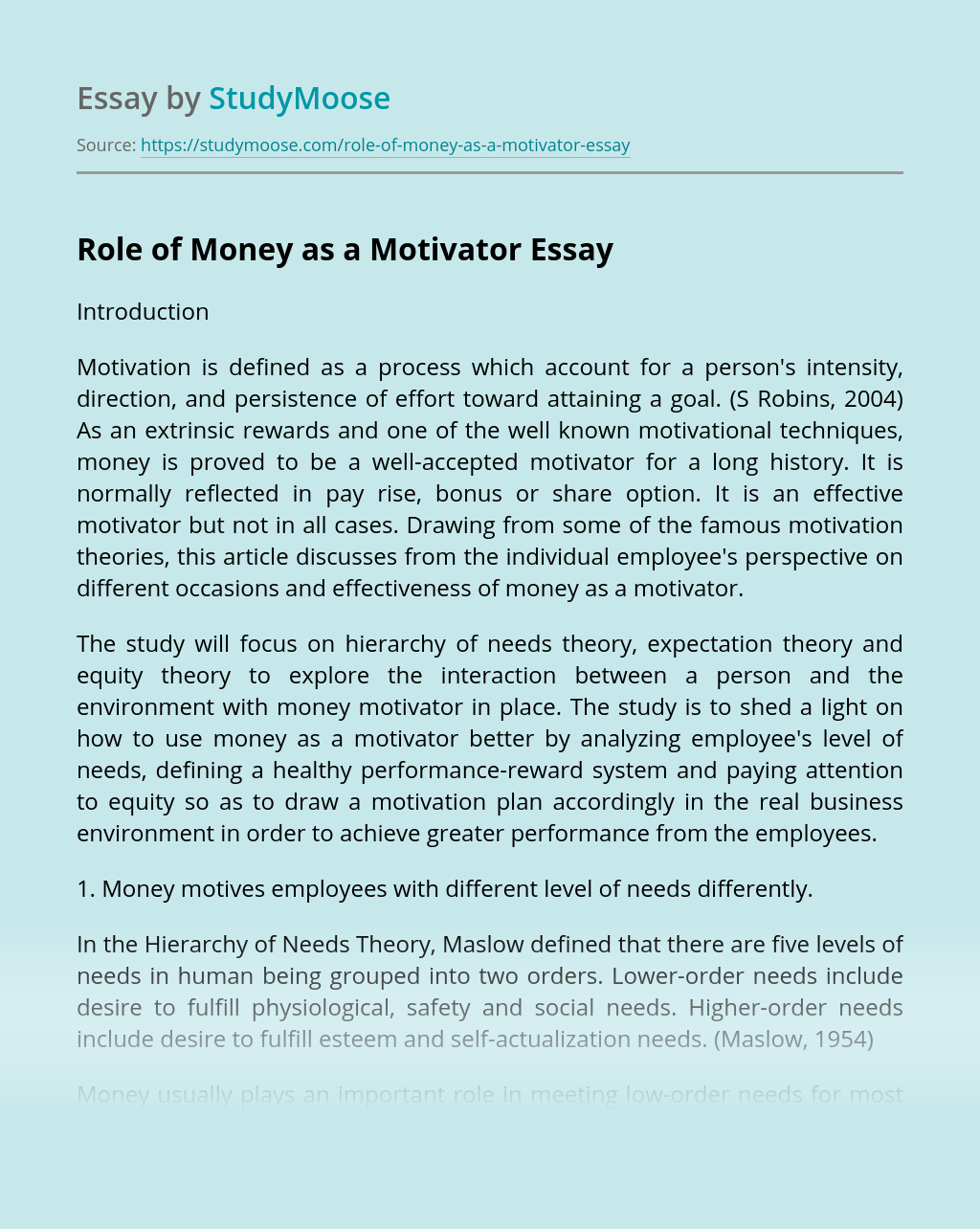 Don’t waste time
Get a verified expert to help you with Role of Money as a Motivator
Hire verified expert
$35.80 for a 2-page paper
Stay Safe, Stay Original