Role of an Army leader

The role of an army leader is to provide purpose, direction, and motivation to soldiers while continuing to carry out the mission or task that is at hand. As a leader in the army, one must maintain their knowledge of the standards of conduct, policy, law, rules of engagement, and the Geneva Conventions. Leaders of the army must be able to understand that their actions, behaviors, and decisions are a direct reflects of their leadership and the army as a whole.

Don't use plagiarized sources.
Get Your Custom Essay on Role of an Army leader Just from $13,9/Page

As a leader in the army, one must be able to stand for the army’s leadership values as a direct representation and they must be able to be a role model for their soldiers to follow.

Army leaders are committed to developing value based leadership and seeing to the well-being of Soldiers and their families. The role of an army leader extends influence beyond the direct chain of command. An army leader is a direct representation of the organization in which they represent and the military in general.

As a leader in the army, one must lead by example and must be a direct representation of the standard and of good behavior. Leaders are responsible for establishing and maintaining positive expectations and attitudes, which produce the setting for positive attitudes and effective work behaviors.

Leaders must be able to encourage and support the growth of individuals and teams to facilitate the achievement of organizational goals. Leaders need to prepare others to assume positions within the organization, ensuring a more versatile and productive organization. Guidance is an important of being a leader in the army by ensuring those tasks are consistent and accomplished in a timely manner. According to Army Regulation 600-100 (AR 600-100), there are three levels of leadership. The levels of leadership are direct, organizational, and strategic.

As a direct leader, you are the frontline leader to the soldiers such as their team leaders or squad leaders. Direct leaders are responsible for building cohesive bonds amongst their team and to empower their subordinates along with implementing policies to be able to accomplish the mission. As a direct leader, you must be able to operate independently, but within the limits of the commander’s intent. Organizational leaders on the other hand are those that must deal at higher echelons such as a battalion or brigade level. Their policies

influence the command climate, and they must be adept in communication, negotiation, critical reasoning, and interpersonal skills. They must be skilled at complex decision making and problem solving and have a good understanding of the entire range of full-spectrum operations. Strategic leaders set the organizational structure, allocate resources, and articulate the strategic vision. Strategic leadership involves running the army from developing strategic plans, policies, guidance, and laws to determining force structure designs based on future mission requirements and capabilities.

As a strategic leader they must be able to prioritize over-arching army programs against competing interests while articulating army programs and policies to the highest levels of DOD and the government. All leaders have the responsibility of mentoring those junior enlisted soldiers below them in rank and to develop them to the fullest extent possible. Army leaders can develop junior soldiers through training and education and are responsible for providing feedback to the soldier through counseling, coaching, and mentoring.

As a leader when you coach a junior soldier, you are merely providing guidance to the soldier in ways to accomplish a task at hand. Coaching is a tool best used to bring out that individual quality as a future leader and to enhance their leadership abilities. One of the most important roles as an army leader is to mentor lesser experienced soldiers and help them to reach their fullest potential both personal and professional. Leader must be able to mentor soldiers in both a professional and casual manner.

Another role of a leader is to train soldiers in a way that they will exemplify the warrior ethos as it is stated in the soldier’s creed. The army has a commitment to the development of its future leaders by providing the proper training in values, attributes, and increasingly complex and unstable world. Respect and leadership is something that goes hand in hand. To be a good leader, you must be able to gain respect in order to be a good leader and be able to maintain moral amongst the soldiers in which you are attempting to lead.

The definition of respect is an attitude of deference, admiration, or esteem; to pay proper attention to and show consideration towards an individual and to treat them courteously. Respect is something that is need in the army due to the fact that as individual progresses in rank they take on more responsibilities and must be able to lead soldiers and in order to lead soldiers, first you must be able to give respect to your soldiers for them to show you respect. Without respect in the army there would be no form of order or standard in which a leader can hold a soldier to as a guide to follow.

Respect is an attribute that must be earned in order to be given. In order to get respect, you must first be able to treat soldiers with respect and as adults. Respect is a major aspect in everyday life in both a professional and personal manner. Respect is the foundation on which our society lives. The darkest times in our country’s history can be traced to a lack of respect. When laws are ignored there can be no civility. The laws in our society are based on respect, both for ourselves and those around us.

For one to be considered a good leader there must be an even amount of leadership and respect that is portrayed to the soldiers. Soldiers are more apt to respect leaders that show them respect instead of those that do not show them respect. As a leader of soldiers, you must be able to separate the line from friend and leader but must be able to give respect in order to get respect. Respect is one of the core army values and every soldier should live by it if they are part of the army and they must adhere to the army values in their everyday lives.

Role of an Army leader. (2016, Jul 13). Retrieved from https://studymoose.com/role-of-an-army-leader-essay 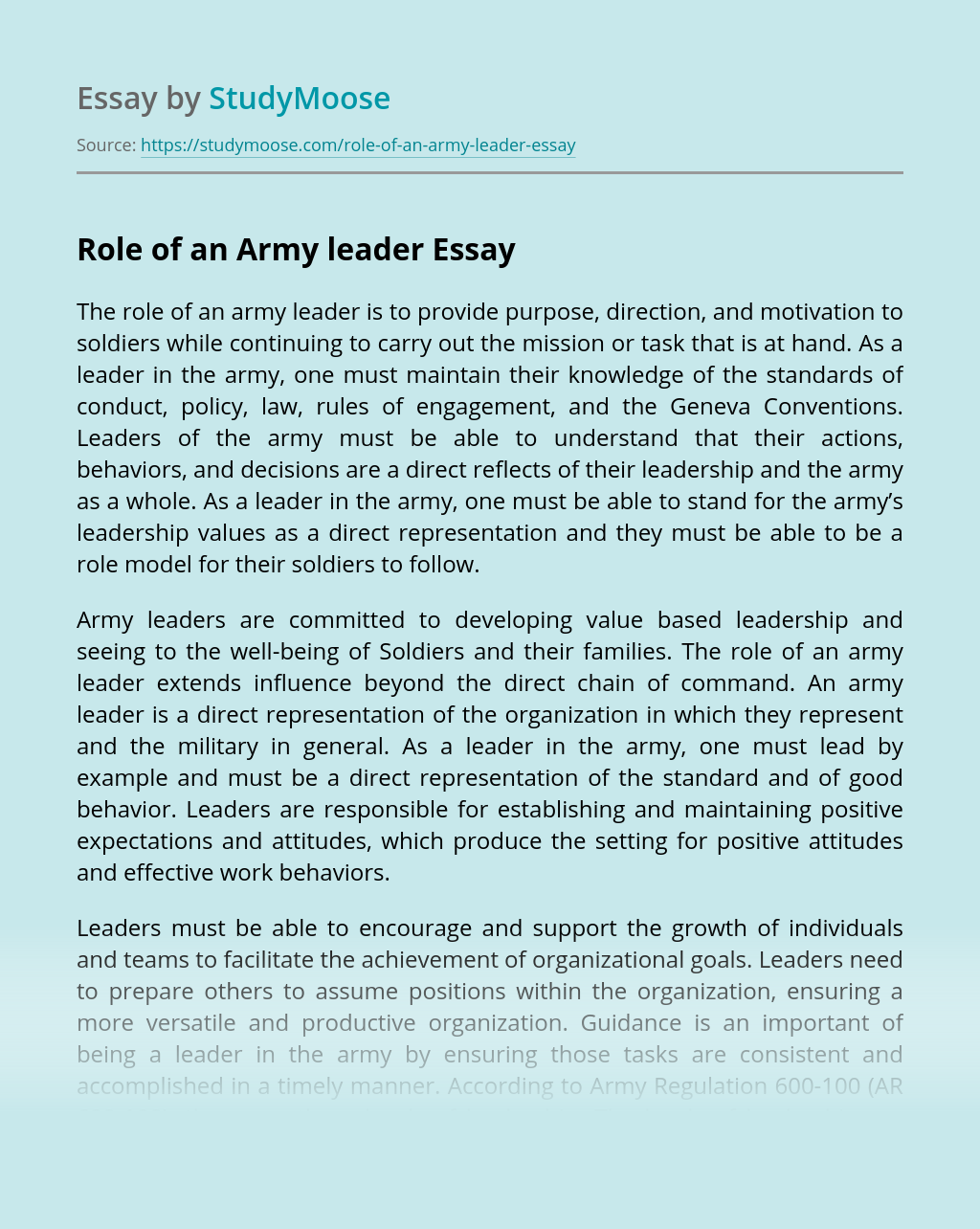 Summary of ARISE: A Destination-for-a-Day Spa

DEVELOP is a company which runs in spa industry. DEVELOP provides its consumers a “destination-for-a-day health club” with health club treatments, wellness, appeal services and also individual coaching related to nutrition, fitness and tension decrease. OCCUR is differentiated from standard health club centers with its goal of constructing strong client relationships by employing a personnel...

In the film remember The Titans directed by Boaz Yakin, an important character in the film is Coach Herman Boone. He uses his determination and skill to make the titans successful. This is shown through the use of visual and verbal features such as camera angles, costume, use of dialogue and music. Boone’s acceptance and tolerance teaches the...

Get Essay
Grandparents and Grandchildren Relationships

In the movie “Remember the Titans,” there were major racial difficulties between black and white students. This was during a time when the school had just been integrated to allow blacks into the school and the high school football team. These challenges helped the Titans grow as a team and made them more co-operative and...

A Matter of the heart and Coach Knight

Coach K and Coach Knight both attained considerable success during their college training professions. Both coaches had the knowledge, skills, and capabilities to lead their teams to numerous victories. Nevertheless, their methods to this success were really various. Robert Katz and M.D. Mumford recognized 3 skills that leaders should need to ensure their effectiveness and...