Role of a Leader in Decision Making

Don't use plagiarized sources. Get your custom essay on
“ Role of a Leader in Decision Making ”
Get custom paper
NEW! smart matching with writer

The bridge is suspended over moving water, symbolic of risk, uncertainty, and opportunity to move. Arriving on the right, it is the opportunity and reward that are the desired results of a successful decision.

An Overview of Decision Making and Decisions

At Harvard University, the advanced leadership initiative (ALI) is dedicated to deploying and educating leadership force among the individuals so that they can face the challenges of national and global issues.

Leaders have potential personal characteristics and qualities that can change the outcome of a selective decision making. The decision taken by leaders can positively change the overall decision making style of organization. Among many other personal qualities of leaders, the important ones are risk tolerance, accountability and value orientation. It is common practice of successful leaders to accept the responsibility of outcome which is resulted from the decision taking by them. Leaders are bold, and they take the decisions which normally other fear to take.

This does not mean that leaders take irrational decision full of risk. They take calculated risks. Successful leaders have the tendency to adapt their values according to the decision, which positively affect the organization.

The uncertainty and unpredictability of the surroundings make leaders fearless and they take a decision in such environment which poses some potential risks and threats (Snowden et al., 2007). One of the main characteristic of the decision making is to take the responsibility of the consequences which results from the decision making process. If one put hundred person efforts in choosing the right decision, then even such thing cannot assure the hundred percent success of the decision. Decisions are taken for the future, and no one can predict future accurately. This is the main reason that most of the people avoid taking a decision which has some embedded uncertainty. In fact, they try to avoid the accountability process in the situation when decision taken failed to produce desired results. Here, the difference of the process of decision making of the common man and leader becomes more accentuated.

Decision making can be regarded as the process resulting in the selection of a course of action among several alternative scenarios. Every decision making process produces a final choice. The output can be an action or an opinion of choice.

An Overview of Decisions

Strategic/Normative Decision Making, or strategic planning,
Describes the process of creating mission and objectives and deciding upon the courses of action that should be pursued to achieve those goals.
Decision making is characterized by
• Limited information processing
• Use of rules of thumb or shortcuts
• Satisficing

What is a Leader?
A leader is a person who has a vision, a drive and a commitment to achieve that vision, and the skills to make it happen.

What do they say about decision making?
The most difficult thing is the decision to act, the rest is merely tenacity. The fears are paper tigers. You can do anything you decide to do. You can act to change and control your life; and the procedure, the process is its own reward. ― Amelia Earhart

The image highlights a person travelling from what was to what will be. For our purposes, this is a leader charged with making a decision that will successfully move the organization from what has ended to a new beginning.

With the moving waters below, the leader may be either accelerated or threatened by the decisionmaking process or journey. The decision-making process is often collaborative.

The Process of Decision-Making

Following are the important steps of the decision making process. Each step may be supported by different tools and techniques.

The standard way of thinking about decisions is backwards, says Ralph Keeney: people focus first on identifying alternatives rather than values.

A problem arises and people react, placing the emphasis on mechanics and fixed choices instead of on the objectives that give decision-making its meaning. A leader with value analysis can yield a full range of alternatives, thus converting decision problems into opportunities. This approach can be used to uncover hidden objectives, to direct the collection of information, to improve communication, to facilitate collective decision-making, and to guide strategic thinking.

Successful decisions are seldom made without considering external factors.

Factors Impacting Leadership and DecisionMaking
Whenever we are involved in making decisions a number of factors can affect the process we follow and ultimately the decision we make.

Leaders often have to make challenging decisions.
Great leaders understand how to balance emotion with reason and make decisions that positively impact themselves, their employees, their customers and stakeholders, and their organizations.
Making good decisions in difficult situations is no small feat because these types of decisions involve change, uncertainty, anxiety, stress, and sometimes the unfavorable reactions of others.
Great leaders also know when to move quickly and proceed with the available information, versus when to take more time and gather additional information.

The leadership style of decision making involves the maximum participation of all the relevant groups. Effective leadership style demands the every possible piece of information from all the corners, whether it is within the organization or outside the organization. Effective leader does not solicit for all the information, but he/she is interested all the relevant information that can assure the outcomes which can arise from the decision (Patricia, 2005). Leaders being like others are prone to make mistakes, and they also learn from these mistakes. But a successful leader learns more from the mistakes of others. In such a way, he/she view things critically and differently from others.

This tendency allows them to create innovative alternative for decision making. Gaining commitment is also the distinguishing feature of the decision making process of leaders. Once the relevant information is collected, and things are put in place for the execution of the decision, leader gains commitment from all the parties involved in the process. The decision making process as a leader not only aimed to gain maximum benefit or to minimize the chance of loss, but it is also important for a leader to produce future leaders within the organization who can effectively take the decision. The organization working under effective leaders create the environment conducive for knowledge and learning (Doh, 2003).

Book: Role of the Leader in Decision-Making

Role of a Leader in Decision Making. (2016, Apr 07). Retrieved from https://studymoose.com/role-of-a-leader-in-decision-making-essay 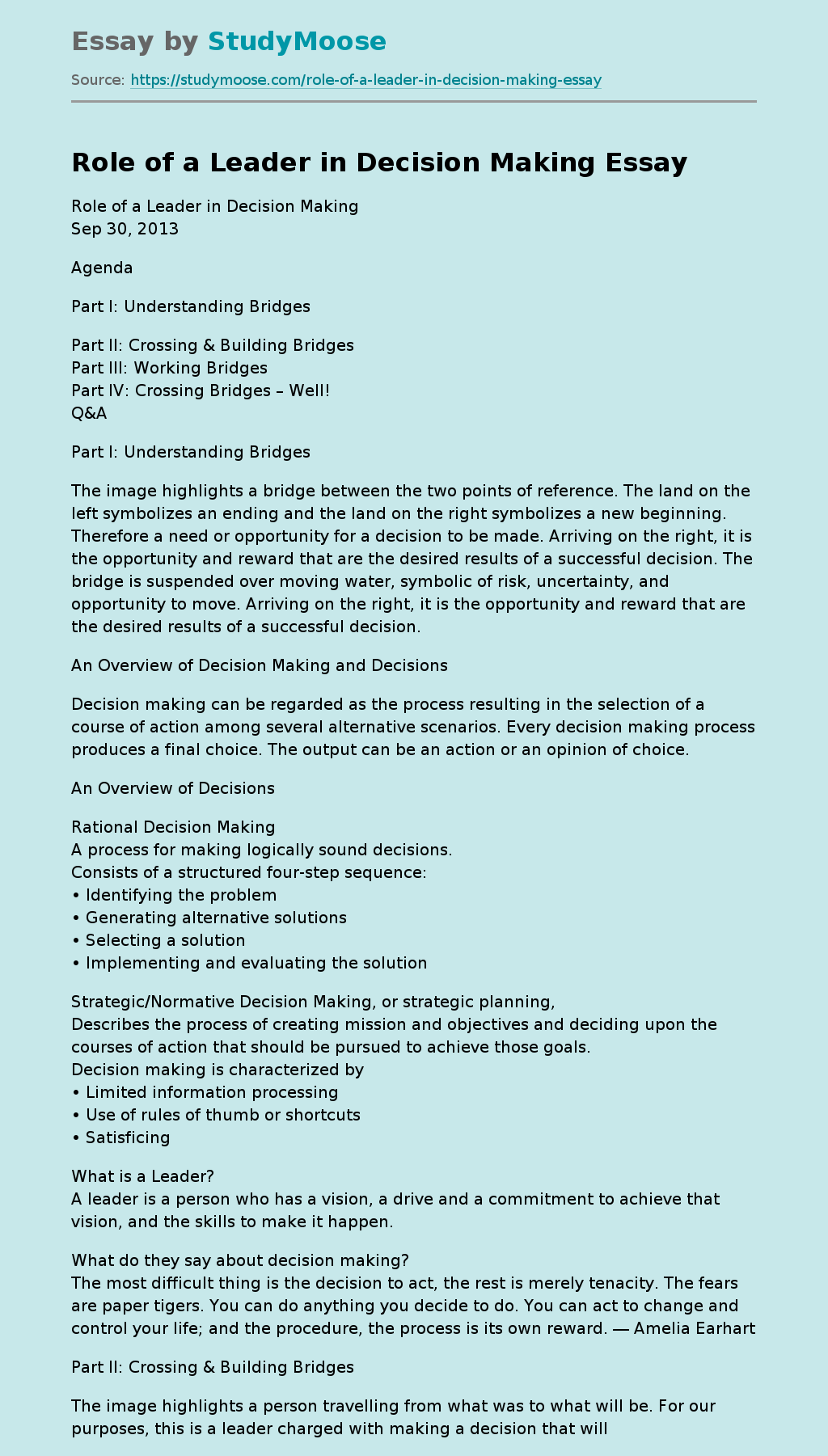