* Rizal’s Secret Mission
To observe keenly the life, culture,, languages and customs and laws of the European nations in order to prepare himself in the mighty task of liberating his people.
– Djemnah with 50 passengers on board

* May 3, 1882
– departed on board Salvadora
– 16 passengers- the only Filipino on board with Spaniards, British, and Indian Negroes as felllow passengers

* From Singapore to Colombo
– Djemnah – French steamer which left Singapore for Europe on May 11
– British, French, Dutch, Spaniards, Malays, Siamese and Filipinos (Mr.

Don't use plagiarized sources.
Get Your Custom Essay on Rizal Chapter 6-7 Just from $13,9/Page

&Mrs. Salazar, Vicente Pardo and Jose Rizal)
– French was mostly spoken but Jose to his surprise and embarassment found that his book of French is inadequate.

– May 17, Djemnah reached point Galle (seacost of Ceylon) “ Picturuesque but lonely and quiet and at the same time sad”
-Colombo (Capital of Ceylon)
“ Colombo is more beautiful, smart and elegant that Singapore, Point Galle
and Manila” * Africa
* “ Inhospitable land but famous”

* First Trip to Suez Canal
-From Aden the Djemnah proceeded to the Red Sea terminal
– it took the Djemnah five days to traverse through the Suez caal which was built by Ferdinand de Lesseps (November 17, 1869)
– Port Said – he was fascinated to hear the multi-racial inhabitants speaking a Babel of tongues.

* Barcelona
– May 15 leaving Marseilles by train, finally reaching his destination – Barcelona on June 16, 1882
-The greatest city of Cataluña and Spain’s 2nd largest city “ IT was ugly, with dirty little inns and inhospitable residents” – “town’s most ugly side
-There is an atmosphere of freedom and liberalism and the people were open-hearted , hospitable, and courageous. -Las Ramblas – most famous street in Barcelona

– Cholera epidemic ravaging Manila and the provinces. (Paciano’s letter dated september 15,1882)
– Unhappiness of Leonor Rivera, who was getting thinner because of the absence of a loved ones. (Chengoy’s letter)
– Paciano adviced his younger brother (dated May 26. 1882) to finish the medical course in Madrid.

* Life in Madrid
* Nov. 3 enrolled in the Universidad Central de Madrid in two courses – Medicine and Philosophy and Letters * Studied painting and sculpture in Academy of Fine Arts of San Fernando – Took lessons in French, German and
English under private instructors

– Practiced fencing and shooting in the Hall of Arms y Carbonell
– Visited art galleries and museums and read all subjects under the sun
– Led a Spartan life in Madrid – lived frugally, spending his money on food, clothing, lodging and books
– His only extravagance was investing a few pesetas for a lottery
– He spent his leisure time reading and writing in his boarding house, attending reunions at the house of the Paterno brothers and practicing fencing and shooting at the gymnasium
– Summer twilights fraternized with the students
– Saturday evenings he visited the home of Don Pablo Ortiga

* Romance with Consuelo Ortiga y Perez
* They Ask Me for Verses “Mi Piden Versos”
– personally declaimed during the New Year’s Eve reception of the Circulo-Hispano Filipino * As Lover of Books
– purchased books from a second-hand bookstore owned by Señor Roses
-Uncle Tom’s Cabin and Wandering Jew – aroused his sympathy for the oppressed and unfortunate people First Visit to Paris (1883)”Costliest capital of Europe” * Purpose: To improve his minds by observing closely the French way of life and spending many hours in the museums, botanical gardens, libraries and art galleries, and the hospitals, including Laennec Hospital, Dr. Nicaise, and the Larisboisiere Hospital, where he observed the examination of different diseases of women

* Rizal as a Mason
– Rizal was impressed by way the Spanish Masons openly and freely criticized the the government policies and lambasted the friars
– Acacia –March 1883
Reason: To secure freemasonry’s aid in his fight against the friars in the Philippines, he intended to utilize Freemasonry as his shield to combat them
-Lodge Solidaridad- became a Master Mason – he was awarded as a Master Mason by Le Grant Orient de France in Paris
– “Science, Virtue and Labor” only masonic writing delivered in 1889
– Graciano Lopez Jaena, Mariano Ponce and MH del Pilar

* Financial Worries
-Due to hard times in Calamba the monthly allowances were late in arrival which cause much suffering to him. * Paciano was forced to sell Jose’s pony in order to send the money to Madrid. * Touching incident on June 24, 1884

* Rizal Involved in the Student Demonstration
* “ Freedom of Science and Teacher”
Don Miguel Morayta – Professor of History – such liberal view was condemned by the Catholic Bishops and promptly excommunicated Dr. Morayta and those who applauded the speech. * Recounting the tumultuous rioting to his family in an open letter dated November 26, 1884

* Studies Completed in Spain
* Was conferred the degree of Licentiate in Medicine by the University on June 21, 1884 * The next academic year studied and passed all the subjects leading to the degree of the Doctor of Medicine – however: 1. That he did not present the thesis required for graduation 2. Paid the corresponding fees

* Rizal as musician:
“I learned the solfeggio, the piano, the voice culture in one and a half, If you could hear me sing, you would wish you were in Spain because my voice is like the braying of the asses” (Letter to de Lete dated Nov.27, 1878)

* Historic Heidelberg (Historic city of Germany)
– Lived in a boarding house with German law students and made Rizal a member of the Chess Player’s Club – Transferred near the University where he worked as an assistant to Dr. Otto Becker, German opthalmologists – Attended lectures of Dr. Becker and Prof. Wilhelm Kuehne

– Visited scenic spots around Heidelberg
– Observed that the German Catholics and Protestants practiced ecumenism or they lived together in harmony and cordiality. -”To the Flowers of Heidelberg”
a fine poem Rizal wrote on April 22, 1886

* With Pastor Ullmer at Wilhemlmsfeld
* Spent a three-month summer vacation in mountainous village near Heidelberg * Stayed in the vicarage of a kind Protestant pastor Dr. Karl Ullmer with Etta and Fritz

* First Letter to Blumentritt
– Prof. Ferdinand Blumentritt, director of the Ateneo of Leitmeritz Austria,
– with the letter he sent a book Arithmetica published in two languages – Spanish and Tagalog – by UST Press in 1868 by Rufino Baltazar Hernandez
– The prof in return send Rizal a gift of two books which marked the friendship that lasted all their lives.

* Dresden (two days sojourn)
– met Dr. Adolph B. Meyer (Dir. of the Anthroplogical and Ethnological Museum)
-heard the mass and which impresses him

* Reasons for staying in Berlin:
1. To gain further knowledge in Ophthalmology
2. Further his studies of sciences and languages
3. Observe the economic and political conditions of the German nation
4. To associate with famous German scientists
5. To publish his novel Noli Me Tangere
– Led a methodical and frugal life
-Worked as an assistant to Dr. Schweigger and attended lectures at night in the University of Berlin
-Practiced speaking in German, French and Italian
– Took private lessons in French under Madam Lucie Cerdole
-Perform daily exercises in Berlin gymnasium
– Tour the countryside observing keenly the customs, dresses, homes and occupations of the peasants
– Enjoyed promenading along Unter den Linden

* On the German Women
“She is not gossipy, frivolous, and quarrelsome like the Spanish women. She is not particular about beautiful dresses and expensive jewelry, though she could dress nicely like any other woman in the world” (Letter to Trinidad dated March 11, 1886)

“Now that you are still young you should strive to read, read and learn. You must not allow yourself to be conquered by indolence because it cost so
little to cast it off”(Advice to Trinidad)

You may also be interested in the following: chapter 17 misfortunes in madrid pdf, chapter 17 rizal, rizal chapter 17 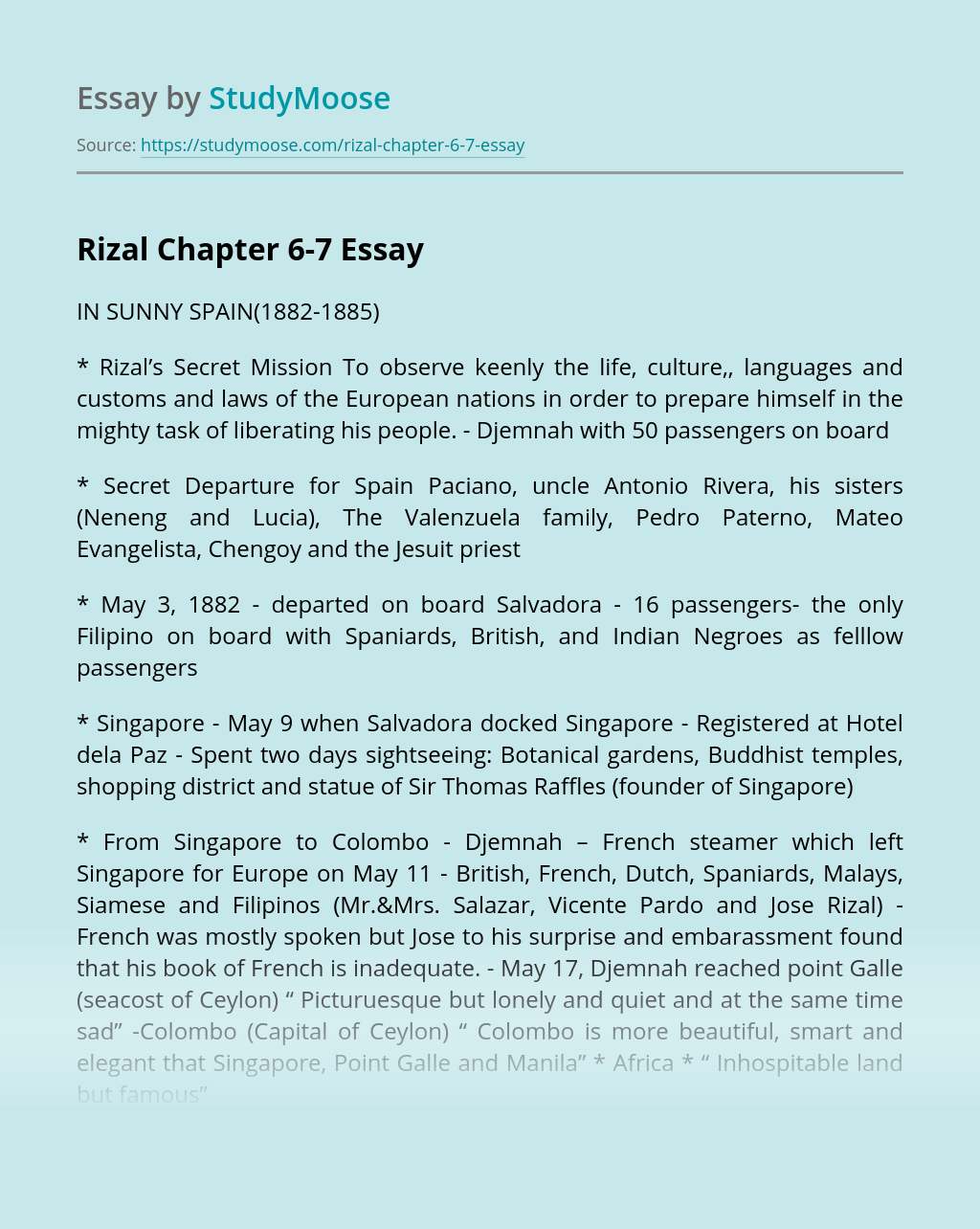 Role of agriculture in economic growth

The data applied for the assessment of the status and role of agriculture in economic growth of Ethiopia, by this term paper is primarily based on the assessment of previous related work by investigating literature review. To be more precise and relay on latest updated data we collect secondary data from official source such as... VIEW ESSAY

Fairy tales picture a world filled with magic, love and the triumph of the good over the evil. Fairy tales are a window to other worlds where the wildest dreams can come true and the hero always lives happily ever after preferably paired with his loved one. Although some people argue that fairy tales are... VIEW ESSAY

Abstract My proposal is to provide you with an Integrated Parish Management Solution which will synchronize all management processes including attendance records, church activities records , financial records, membership personal data etc. The need for a customized Integrated Parish Management Solution for the Church cannot be over emphasized because the solution will be tailored in... VIEW ESSAY

Teaching by Principles: An Interactive Approach to Language Pedagogy is a very widely commended methodology text which is actually used in the teacher education programs throughout the world. This particular book actually offers a very comprehensive review of practical language teaching options, all tightly anchored in acknowledged principles of language learning together with the language... VIEW ESSAY