"In the Suburbs" and "Richard Cory"

Considered by many to be their most prized and sought after possession, money is rather the capital for survival. For years, the concept of materialism has consumed society. The thought that money and majesty can make one happy has been a commonly shared notion throughout various cultures, causing people to seek happiness through tangible assets and higher social statuses. These seekers of happiness may never find it by achieving wealthier statuses, while others find satisfaction in modest lifestyles.

It is the idea that money does buy happiness that is reflected in the poems “In the Suburbs” by Louis Simpson and “Richard Cory” by Edwin Arlington Robinson.

Don't use plagiarized sources. Get your custom essay on
“ “In the Suburbs” and “Richard Cory” ”
Get custom paper
NEW! smart matching with writer

Although the authors of both poems shed light on different perspectives of the socio-economic spectrum, the themes in both of the pieces are similar: purpose in life cannot be purchased. Both poems also give rise to the definition of the true American Dream is, since both a wealthy person in “Richard Cory” and a suburbanite in “In the Suburbs” seem to be unhappy with their lives.

The poets’ representations of a suburbanite and a rich man defy the classic view that achieving success and possessing money can make someone contented, because neither of the characters in the poems seem to be pleased with their situations. In both “In the Suburbs” and “Richard Cory,” the poets present the concept that having money is not the most significant aspect of life. Living in the suburbs implies that one is neither extremely wealthy nor poor, yet the speaker of the poem is unhappy despite his stable lifestyle.

Thus, Simpson implies that unhappiness does not come from the inability to buy things, but rather the inability to develop a distinct identity as a result of living in the mundane and homogeneous suburbs. Through Simpson’s use of blunt diction and passive statements, the speaker conveys the dreadfulness of the “middleclass life” that accompanies residing in the suburbs – a life that is marked by conformity, ultra-conservative values, and despair (3). This is unlike the inferences that can be made by the reader of “Richard Cory”.

In Robinson’s poem, the author uses words such as “imperially,” and “king” to describe Richard Cory. Robinson does this to make Cory seem pleased with his stately lifestyle, only to surprise the reader at the conclusion with situational irony. Such irony occurs when “Richard Cory [… ] / Went home and put a bullet through his head” (16). This profound ending is ironic because the reader is initially more inclined to regard Richard Cory not as a person who would commit suicide, but rather as the “people on the pavement” regarded him to be: regal, endowed, and refined (2).

Though the end of “In the Suburbs” does not contain such irony, both poems contain a shift in their final stanzas. In “In the Suburbs,” the tone shifts from pessimistic to submissive by Simpson’s addition that “others before you / Were born to walk in procession” (5). In “Richard Cory”, the tone shifts from one of pride and cheerfulness to one of sorrow. Nonetheless, both poems suggest that someone’s life may not always be as it seems, and that life can be filled with emptiness despite all the possessions and adequacies that one may have.

In Simpson’s “In the Suburbs,” the reader is introduced to the idea of dreadfulness with the line “There’s no way out” (1). This line creates suspense for the reader – something that both Simpson and Robinson do effectively in their poems – by implying a prison-like lifestyle. Both poets create suspense through their use of similar syntactical strategies such as anaphora. For example, Robinson uses anaphora when writing “And he was always quietly arrayed / And he was always human when he walked” (5).

He does this to emphasize to the reader that Richard Cory is not condescending or snobby, which evokes curiosity in the reader as to wonder why Cory seems to be so composed and humble, despite his obvious wealth and power in society. Similarly, Simpson presents anaphora in the first stanza of “In the Suburbs”. Unlike Robinson’s anaphora though, Simpson directly addresses the reader. He does this by writing “You were born to waste your life. / You were born to this middleclass life,” equating “waste” and “middleclass” since the structure of both sentences is identical – with the exception of those two words (2-3).

The poem then goes on to say that “[… ] you / Were born to walk in procession / To the temple, singing” (5-6). The statement reveals the submission – and almost colt-like routine – of suburban life, unlike Robinson’s poem that describes the majestic and comfortable lifestyle of Richard Cory as viewed by the people of his town. Though both “In the Suburbs” and “Richard Cory” contain anaphora, the syntax of the poems also contrasts. While “In the Suburbs” tells a story in just six lines that have no rhyme scheme, “Richard Cory” is longer and has a definite rhyme scheme (abab, cdcd, efef, ghgh).

Thus, the rhyme scheme of “Richard Cory” and the lack of one in “In the Suburbs” symbolize conformity and the desire to defy conventionality, respectively. Because Edwin Arlington Robison published “Richard Cory” during the years following the Industrial Revolution, Robinson may have been able to witness society’s tendency to seek wealth and social status at any cost. Wealth was believed to be the most important component to achieving the American Dream, and those who had it were regarded with more respect.

Since the industrial tycoons of this time had vast amounts of money in their possession, it is reasonable to infer the character of Richard Cory is symbolic for people of the big business, corporate trusts, and “old” money. Though Gatsby-like Richard Cory seems to have it all, the theme conveyed by Robinson is that happiness cannot be purchased or acquired with a higher social status. When Simpson’s “In the Suburbs” was written over half a century later, the idea of the American Dream shifted to the suburbs of white America where life was dull and mundane, despite people’s middleclass status and sufficient amounts of money.

In the suburbs of 1950s American, money was unable to buy the individuality and happiness that its residents sought for, which caused them to have miserable existences. Essentially, “In the Suburbs,” and “Richard Cory” present discrepancies between what appears to be true and what actually exists: the suburbs are portrayed as offering a comfortable life even though suburbanites are unhappy, and Richard Cory appears to be joyful when he is actually depressed and empty.

The characters of both poems clearly enough wealth, yet they still remain discontent. Both poems convey the influence of money and status. Both poems also show that life is not always at it seems. Though they contrast in their structure, style, and tone, “In the Suburbs” and “Richard Cory” share the thematic message that happiness comes from within oneself, and not from having money or material goods. 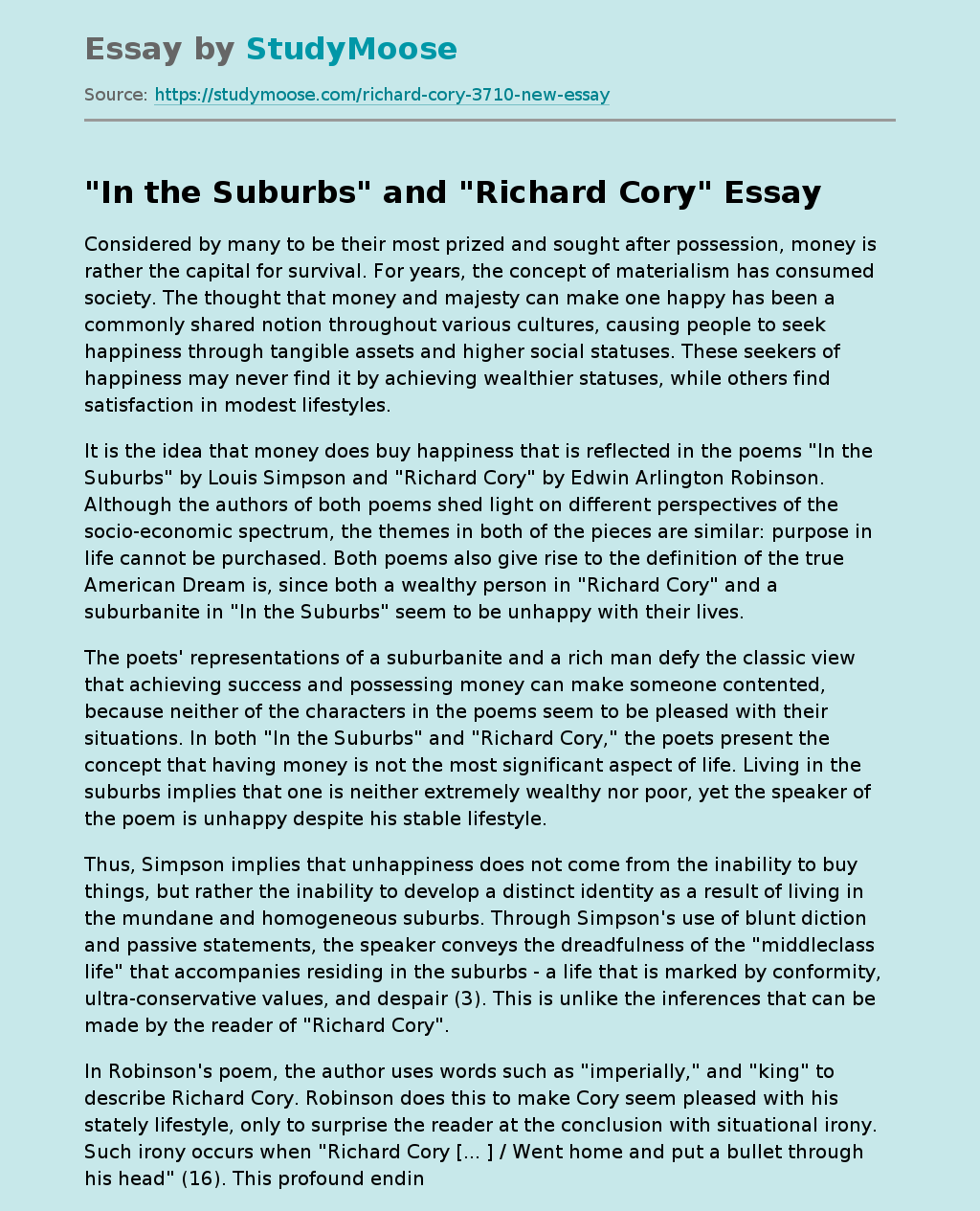