I find this short story to be somewhat deceiving at first because it feels as though the story is about the generous nature of Agnes Milton. The first several pages the narrator speaks about her hardships in life and the generosity of Agnes; however, the ending is quite unexpected. The narrator was passed from relative to relative after her father’s death (apparently due to alcohol poisoning), but Agnes was the only one kind enough to take her in and treat her like a daughter.

Don't use plagiarized sources. Get your custom essay on
“ Review of Short Story The Closing Door ”
Get custom paper
NEW! smart matching with writer

This story gives the reader a good slap into the realities of life for colored people, especially in the south. Agnes is a complex character who changes drastically by the end of the story. In the beginning Agnes seemed to be a kind hearted, gentle, playful woman. She has “the mother heart…that…brought me to live in the only home I have ever known.” (1905). After Agnes got pregnant appeared to be a point where she began to change, and the quietly closing doors were apparent to the narrator and Agnes’ husband, Jim.

She seemed to be withdrawn, anti-social, and basically interested in solitude.

Agnes had a great joy in life when it came to her younger brother, Bob. She loved him desperately and waited, with great joy, for his letter to come to her every week. Agnes’ demeanor went down even further after she learned about Bob’s death. Not long after the news of Bob’s death Agnes’ other brother, Joe, appears. For the first time in quite awhile Agnes showed some signs of life – she smiled again and even chuckled.

After Agnes learned the truth about Bob’s death she took a desperate tail spin into depression. She continued with the familiar quietly closing door whenever someone looked for her in a room, and she became quiet solitary. It appeared as though Agnes could not fathom a world where people of color would have any rights, where they would be regarded as human beings. She lost all hope in G-d and in humanity because of the cruelty endured by her beloved brother.

However, Agnes didn’t appear to fathom, or even consider the fact that her brother stood up for himself. She did not give him credit for his bravery of attempting to force someone to recognize him as a human being. His actions are comparable to that of someone like Martin Luther King, or Harriet Tubman, but his family didn’t appear to make note of his great bravery and courage. Bob was lynched for attempting to be a human being, and for attempting to gain respect. Agnes didn’t give any notice to the large step Bob took in doing this. She fell into a depressive state, and did not allow any ideas of hope to conquer her solitude. She feared that her child would live and grow up in a world where he is not respected and not treated with any dignity. She had no hope for her family, herself, or the future.

I feel as though this story gives a strong standpoint to the ideas of the time. It is the time of modernism, but Grimké is making sure that everyone realizes the world is not as modern as everyone wanted to think it was (at that time). People of color were not treated as equal to white people, and they didn’t get respect. As stated in the story, the were to get off a side walk to allow a white person to pass through, as though the colored person were insignificant, as though they were sub-human, less important than the white person. Grimké lets the reader, the world know that although technology is beginning to advance itself, and life is becoming easier for people, don’t forget that this has happened in the past and is continuing to happen. She wants to make sure that people remember the past so that it will hopefully never be repeated again. 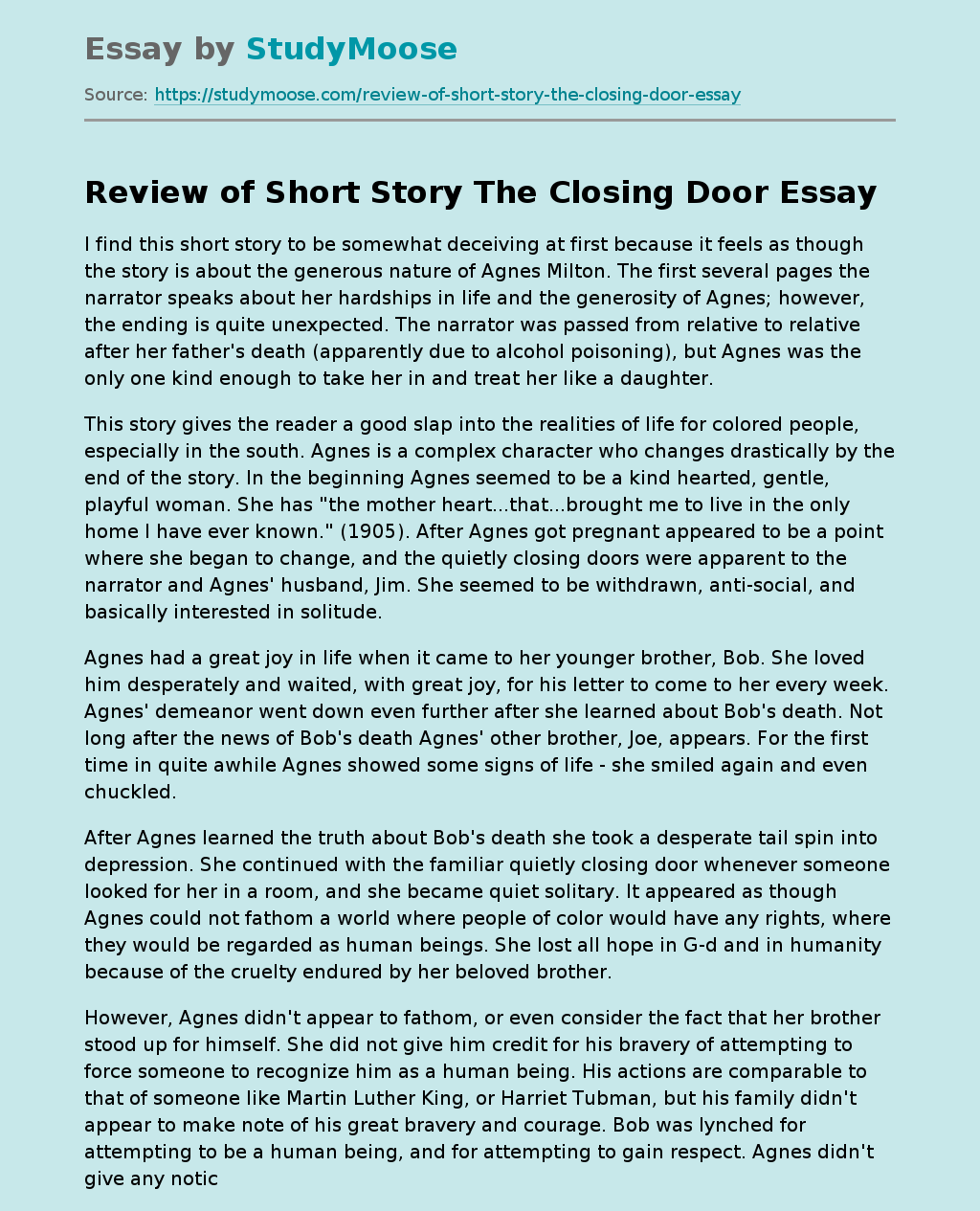