Good morrow esteemed lords and ladies of the court, it is within my regrets to tell you that our “noble” thane (of both Glamis and Cawdor) and King Macbeth has murdered our fair (late) King Duncan for his own traitorous and greedy purposes. Macbeth has betrayed his country and committed regicide, the highest form of sacrilege. The prosecution has found Macbeth guilty beyond a reasonable doubt, with several accounts of murder, manslaughter, attempted murder, one account of regicide and conspiring to murder.

Don't use plagiarized sources.
Get Your Custom Essay on Macbeth – Closing Address to the Jury, Prosecution. Just from $13,9/Page

Macbeth is a murderous heathen, whom sought to heighten himself to the rank of King by betraying the country (already stated this), his King and god. An earlier witness; one of Macbeth’s “Loyal” servants, (the gentle woman) stated that he had heard Macbeth whispering “I go, and it is done. The bell invites me. Hear it not, Duncan, for it is a knell that summons thee to heaven or to hell.” Obviously scared of Macbeth’s murderous mind, the servant stayed quiet until now.

There were more witnesses as of yesterday, as a cutthroat hired by Macbeth told the jury of the atrocities he had performed, before being dragged off to be executed. To quote; the murderer said “Macbeth threatened me with a certain death if I were to betray him.

That was just a shimmer of the murderer within him.” The prosecution would also like to point out that straight after Duncan’s body was found, Macbeth killed the two intoxicated guards, blaming these poor innocent men for the murder, and also dispatching of two possible witnesses. Macbeth did also state “O, yet I do repent me of my fury, that I did kill them.” In stating “them”, Macbeth could have been referring to both the murdered slaves and our fair King Duncan. Macbeth also insinuated that the drunken guards murdered Duncan in his sleep, but if you look and think, and I am sure you are all intelligent Lords and Ladies, a drunken guard cannot harm more than a fly (people who are drunk are more likely to become very aggressive), as they would not be able to stand.

In an earlier testimony, we called upon Lady Macbeth, who, when confronted with the evidence and questioning, cracked under pressure and confessed her hand in murdering Duncan. Lady Macbeth acknowledged Macbeth and herself plotting to murder Duncan, Banquo, and MacDuff’s wife and children. Macbeth also attempted to murder Fleance and MacDuff. A servant came forth and stated that Lady Macbeth had whispered to Macbeth “Infirm of purpose! Give me the daggers. The sleeping and the dead, are but as pictures. ‘Tis the eye of childhood, that fears a painted devil. If he do bleed, I’ll gild the faces of the grooms withal, For it must seem their guilt.” Lady Macbeth obviously did not know she was whispering loud enough for the Servant to hear. Unfortunately, Lady Macbeth has passed away now, taking her life before more answers arose.

The defence earlier tried to state Macbeth was acting under the influence of three evil witches. They stated that the witches had told him “All hail, Macbeth, that shalt be king hereafter!” According to the defence, this justifies treason, heresy, murder and plotting against the crown. The court was lucky (luck is not a part of their nature) enough to get one of the Witches (Weird Sisters and they don’t listen to petty human demands and/or requests) in the room, whom stated that “Macbeth sought to murder King Duncan on his own accord; we witches merely stated he would be King.” The Witch denied fuelling Macbeth’s murderous tendencies.

MacDuff, slayer of the late Macbeth, retold the account of his family’s murder, which was issued by Macbeth. He stated to the court that his wife and son were in the midst of talking when a murderer ( he wasn’t there when they were murdered he had heard news of it but never witnessed it ), sent by Macbeth shook the residence by declaring that he was a traitor. He stated that his son, a brave young lad, meant to protect his father’s name. His honourable son screeched at the Murderer, “Thou liest, thou shag-eared villain!” This was followed by a fatal stab to his son, in which Lady MacDuff ran, shouting murder. The villainous murderer sought after Lady MacDuff, who could not outrun the murderous lunatic. MacDuff was severely shaken during this testimony, for reasons obvious to the court.

He also recounted the end of Macbeth, in affirming “I held his head… I held the head of the treacherous king. I had to do it; he slaughtered my family, my life! I regret to say I enjoyed it, enjoyed taking back what he took from me.” If this does not prove the guilt of Macbeth, I do not know what does. As the court can see, the mind inside of Macbeth was a sickening one, as he ordered the slaughter of innocent people, to secure his position as King. In all these dishonourable acts, I believe it is in the interest of the court to say that Macbeth is guilty of multiple accounts of treason, murder, attempted murder, manslaughter, regicide and heresy. I thank you, esteemed lords and ladies, for your time in this period of turmoil. May King Duncan rest in peace, and the wicked Macbeth burn for his crimes. 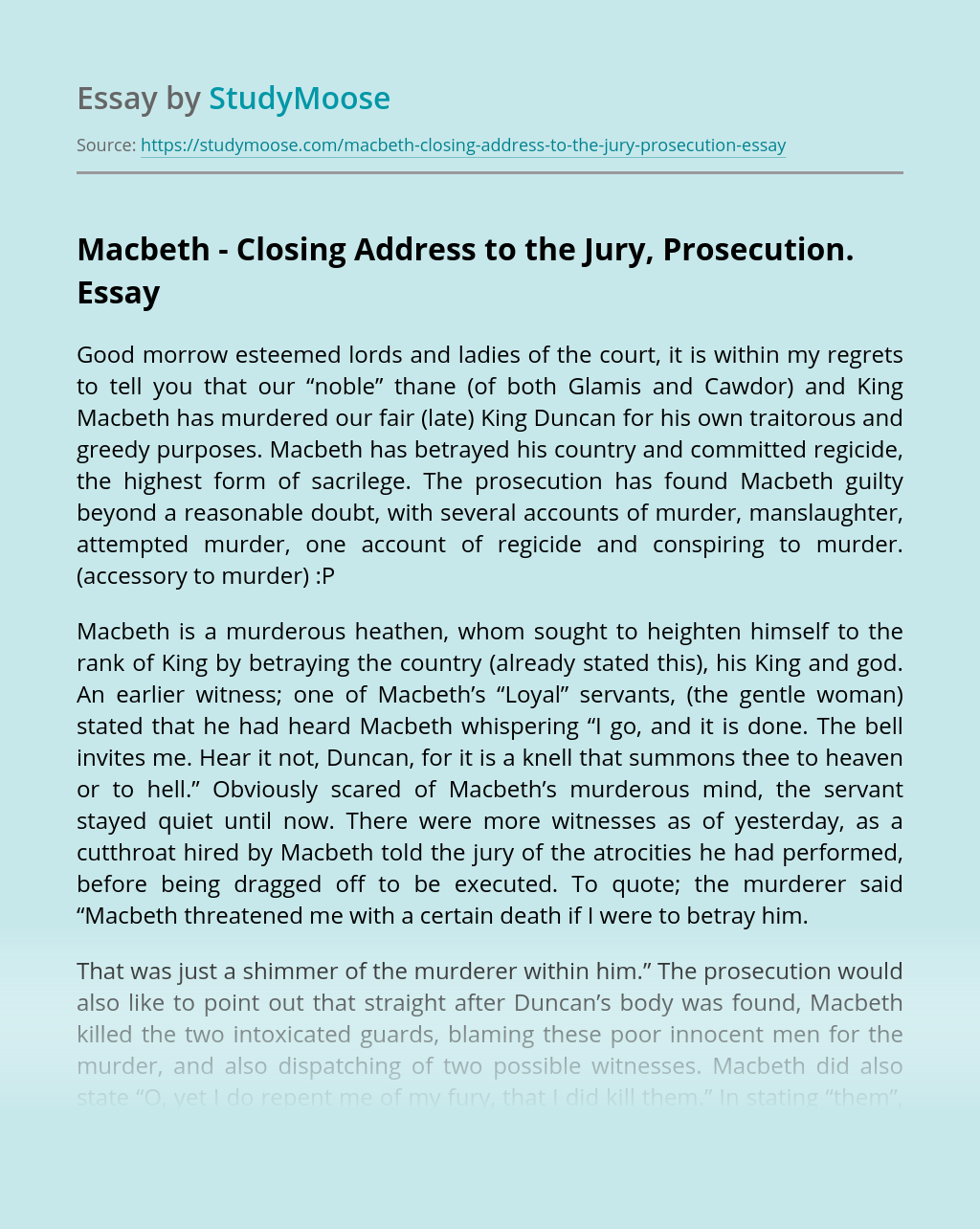 Introduction Writing this paper, I faced a challenging task of exploring, discussing and analyzing a well-written book about one of the most prominent and controversial figures in American politics and history. In the first part of my report I would like to discover basic themes and concepts of the book as well as compare and...

“The future belongs to those who prepare for it today.” This quote by Malcolm X showed that he was ready for the future, whatever it may be. (Moncur). Malcolm X greatly affected the turn of black de-segregation in the 1950s. He had strong beliefs, suffered a gruesome assassination, and a remarkable legacy. Malcolm Little had...

George Orwell’s Animal Farm is an allegorical novel that reflects events such as the Bolshevik revolution, the economic reform by Trotsky the Russian famine in 1921 and during the Stalin era before the Second World War. The pigs represent the communist leadership, and the rest of the animals on the farm symbolize the different parts...

How Does the Setting Enhance the Atmosphere in 'The Strange case Of Dr. Jekyll and Mr. Hyde'?

The Role and Significance of Hubris in the Fall of Jason

As is archetypal to all Greek tragedies, ‘Medea’ by Euripides chronicles the downfall of a noble hero, Jason, as a result of a combination of factors like fate, hubris and the will of the gods. In ‘Medea’, the hubris of the main character, Jason, was his pride. This drove him to betray his wife Medea’s...