In the Harvard Business Review case Responding to the Wii, Kazuo Hirai was faced with an interesting dilemma. Hirai, the chief executive of Sony Computer Entertainment Inc. faced pressure due to Sony’s Playstation 3 video game console losing market share to the Nintendo Wii. Hirai faced a major business decision in deciding how Sony should respond to the cheaper, more interactive, family oriented Nintendo Wii. The Video Game Industry at a Glance

From an industry analysis standpoint, the videogame console industry in 2008 was not very attractive.

Don't use plagiarized sources. Get your custom essay on
“ Responding to the Wii Group Case Writeup ”
Get custom paper
NEW! smart matching with writer

The industry was, and still is, structured as an oligopoly in which there are few large firms with differentiated product and high entry barriers. The three main competitors- Sony, Microsoft, and Nintendo- completely saturated the industry and held the majority of the market share (Figure B). Capital and fixed costs were very high for console developers and entry required third party software developers to build quality games to be sold with their platforms. The big players like Sony (Playstation 3) and Microsoft (Xbox 360) were having difficulties selling their console even if their consoles were priced higher at $499 compared to $250 for Nintendo Wii, creating an environment of intense rivalry.

Compared to the other two rivals, the Nintendo Wii was less advanced but it was priced significantly cheaper which was met with enthusiastic customer reception. Nintendo also targeted all ages with simplicity, usability, and interactivity. The Nintendo Wii console compared to the Playstation 3 and Xbox 360 was the only competitor to actually make money on its console alone (Figure A).

Sony sold its console at a loss to make the product more affordable while generating profit through games and accessories. (Near) Impossible Entry

For a new entry, it would be very difficult to enter the industry and grab market share from Sony, Microsoft, and Nintendo. It is not impossible, as history has shown that little companies can make a big splash with bold innovation. If the product is not differentiated from already existing products, consumers would not be drawn to it – innovation is key in the gaming industry. Consumers tend to buy into the newest and best products on the market. We could see an example of this during the fall of Sega and their Dreamcast. Despite having the first 128-bit system, Dreamcast failed to incorporate new capabilities like Playstation 2 did with their DVD-playing capability and Internet connectivity. In addition, Dreamcast had manufacturing setbacks with only four games ready at launch, this eventually lead to their downfall when Sony released the Playstation 2. Based on both cyclical (innovation driven) industry changes and the current industry environment, there are numerous options that Sony could take to regain industry leadership. At a basic level, Sony can choose to respond to the Wii, or they can choose to continue their current business strategy.

There are many important lessons that Sony should keep in mind as they try to regain leadership from Nintendo. Some of the key points are: continuing to be innovative, be bold with new discoveries and products, know your current and potential market and know that imitation does not always guarantee relative success. Learning these lessons will help Sony regain the strength in the video game industry. History has shown that it is crucial to continuously create innovative technology. Each competitor in the industry has displayed efforts in increasing technological innovation as well as improving existing gaming consoles. After the release of a new product, the company is expected to track and manage the success of that product, taking into account any customer evaluations. If a company fails to improve their existing products, other companies can swoop in to regain market share. Even though there are high barriers to entry, competition is strong in this industry. This is especially prevalent within the companies that own the majority of the market share. While continuous improvement is necessary on current products, it is also crucial to be bold and thinking outside of the box. As mentioned, the common theme across the video game industry has been creating an innovative product and then simply improving the system over time. While that has been proven to work in instances in the past, there is a lot to learn from the creation of Nintendo’s Wii.

Nintendo, like the rest of the company’s used the same ideology of continuing improvements to an already developed product until they took a bold move of introducing a whole new game console. When Nintendo introduced the Wii, they took a risk because it was not similar to their previous game consoles. They saw an opportunity to bring something new to the video game industry that could create value to not only the originally targeted market, but also a much larger market. The Nintendo Wii is a prime example of how a company can serve their already targeted market and also see the opportunity to expand into additional segments. Much of Wii’s success was due to the fact that it appealed to a large audience. Nintendo gained a market advantage as ‘first movers’ in this new era of technological and conceptual change in the video game industry.

The now enabled users to be more active and engaged which revolutionized the way consumers thought about gaming systems. The structural attractiveness of the industry has changed over time. Due to the great number of players, with no key leaders in the industry; entry was initially much less challenging. As a result, Sega easily claimed market share upon entry into the industry. Many other companies also took advantage of the low barriers to entry and followed suit. This allowed for increasing change and exploration; which over time, resulted in only a few companies succeeding in areas of size, market share, brand image, and customer loyalty. Over time, these main players like Nintendo and Sony, who have led the industry with their competitive advantages, have saturated the industry. The video game market has also seen a significant shift. There is a greater emphasis on games and accessories, which bring companies higher margins. Sony should take history into account as they consider their options in responding to the Wii.

The first option that Sony could implement would be to capitalize on what they already do well. The Wii is intuitive, marketed extraordinarily well, and is uniquely differentiated (but not technologically elite) in its simplicity and usability. The history of the video game industry has rewarded bold innovation with market share. Sony could accept Nintendo’s advantage in the console market, and continue to sell their console for a loss, but market their games and accessories in order to benefit from the high margins. Sony could also simultaneously work to achieve economies of scale; this option would reduce prices for consumers and encourage existing customers to buy into more Sony affiliated products, increasing Sony’s brand loyalty and their stranglehold on the high performance console market. The console industry seems to illustrate cyclical behavior caused most likely by innovation, so the strategy would be for Sony to capitalize on what it does best in order to maintain market share.

A second, more aggressive approach would be to enter the physically interactive video game sphere with the introduction of a new product. Since the introduction of the Wii has provided consumers with an entirely new interactive video game, the market would be open to Nintendo competitors as well. The upside of introducing a successful new product would be a near immediate recapturing of market share as well as building trust (via early entry positioning) for better interactive technology in the future. This could create some brand recognition for Sony as a leader in the interactive video game category. Conversely, entering and responding so quickly could be detrimental. Research and design, done quickly, can be subpar and extremely costly. Entering with a subpar product can also dilute Sony’s brand of high performance and high quality devices. Finding an Optimal Solution

The ideal solution for Sony is to find a balance between introducing a new product and choosing to focus on their current advantage. Nintendo’s Wii console clearly has an advantage of being a system built around innovation, at a lower cost, and marketing towards whole family usability. Sony should attempt to innovate for the next console release, but focus on releasing a very usable, low priced physical game accessory that allows for more user interaction. This could be the key to getting a foothold in the growing interactive market. Since coming out with a completely new system would most likely cannibalize sales on Sony’s older console models, there is a clear advantage in adding/altering the console that they already have. Unlike the Sony Eye (a late 2007 Sony product), which saw limited usability, the interactive product should make operating the Sony console easier and come with simple; but usable enough to be deemed a successful product. Sony should expand this new device greatly and make it integral to the operation of its next console, with the hope that bold innovation would help recapture market share. Sony would remain highly profitable, gain a foothold in physically interactive video gaming, and establish a long-term strategy of recapturing a large share of the video game market with bold innovation.

Responding to the Wii Group Case Writeup. (2016, May 17). Retrieved from https://studymoose.com/responding-to-the-wii-group-case-writeup-essay 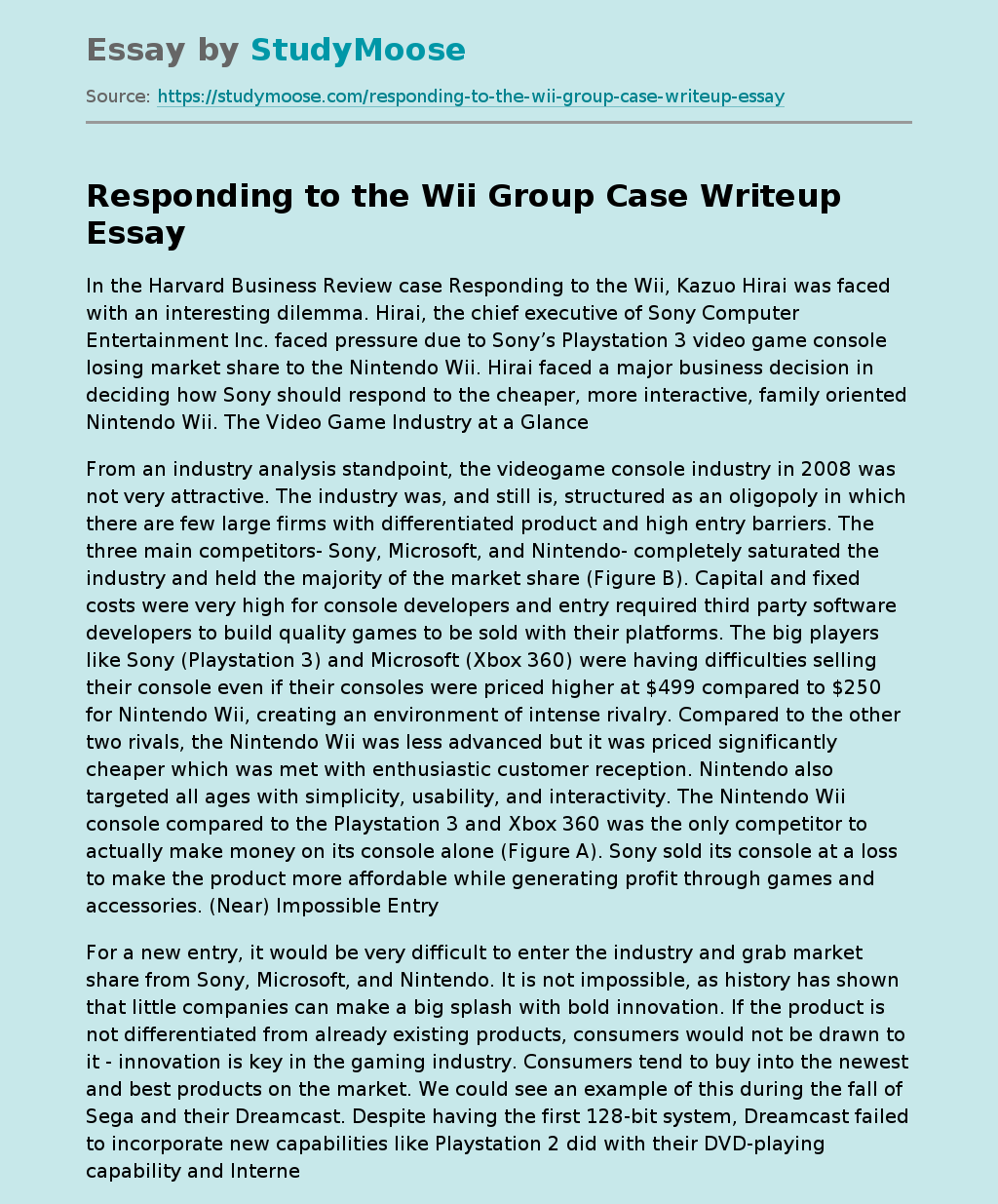