In the first two books, Aslan is a clear-cut figure. Aslan is what Jesus would be like in Narnia. He acts as a parallel and inspires fear in his enemies and love and devotion in his friends. He makes the four children high kings and queens, and banishes evil from his kingdom. It is like a fairy tale. He undergoes development through the sequence of seven books though, becoming more distanced and formal. In The Voyage of the Dawn Treader, Aslan seems more distant; he appears in other forms, such as a lamb.

Don't use plagiarized sources. Get your custom essay on
“ Resemblence Between Christ and Aslan ”
Get custom paper
NEW! smart matching with writer

In the New Testament, Christ is depicted as a lamb.

Lewis deepens the spiritual experience of his characters by making Aslan harder to find. Faith now enters into the equation, belief without seeing. An example is the mouse Reepicheep, who is determined to find Aslan’s Country (symbolizing Heaven), even if he has to swim to the end of the world to do so.

The last two Chronicles address the beginning and end of Narnia.

The Magician’s Nephew gives us Narnia’s Genesis account. Here Aslan is established as the Creator and he sings Narnia into existence. It is very similar to the story in Genesis of God creating the world. Aslan tells the creatures, “I give to you forever this land of Narnia. I give you the woods, the fruits, the rivers…The Dumb Beasts whom I have not chosen are yours also”.

Other examples of the similarities between Christ and Aslan include when Aslan says “I am the great Bridge-builder”.

Christ in the New Testament too says, “I am the Way, the Door”: In The Horse and His Boy Aslan tells “‘Touch me. Smell me. Here are my paws, here is my tail, these are my whiskers'” which is like Jesus telling John to touch his hands and side when he doubts Him. Another resemblance is that the blood of both Jesus and Aslan can bring the dead to life. A drop of blood from Aslan’s pierced paw revives the dead Prince Caspian and brings him to a younger version of himself in The Silver Chair. Christ’s shed blood has the power to resurrect believers into new life too. In the same book, Aslan replies “I am” which parallels the reply God gave Moses, “ I Am Who I Am”.

There is a Stone Table in The Lion, the Witch, and the Wardrobe that is where the Witch slew Aslan. However, the Witch did not know of magic even older than the stone table “that when a willing victim who had committed no treachery was killed in a traitor’s stead, the Table would crack and Death itself would start working backward”. This mimics the resurrection of Jesus after He dies on the cross. After the resurrection of both Christ and Aslan, it is first discovered by the female followers. In this case it being Susan and Lucy for Aslan and Mary Magdalene along with the other women for Christ. After Aslan returns to life, he goes to the White Witch’s castle and breaths life back into the creatures she had once turned into stone. Jesus creates life after death after he resurrects and holds the keys of death and Hell. The Bible and The Chronicles of Narnia have a shared likeness.

Resemblence Between Christ and Aslan. (2016, Dec 22). Retrieved from https://studymoose.com/resemblence-between-christ-and-aslan-essay 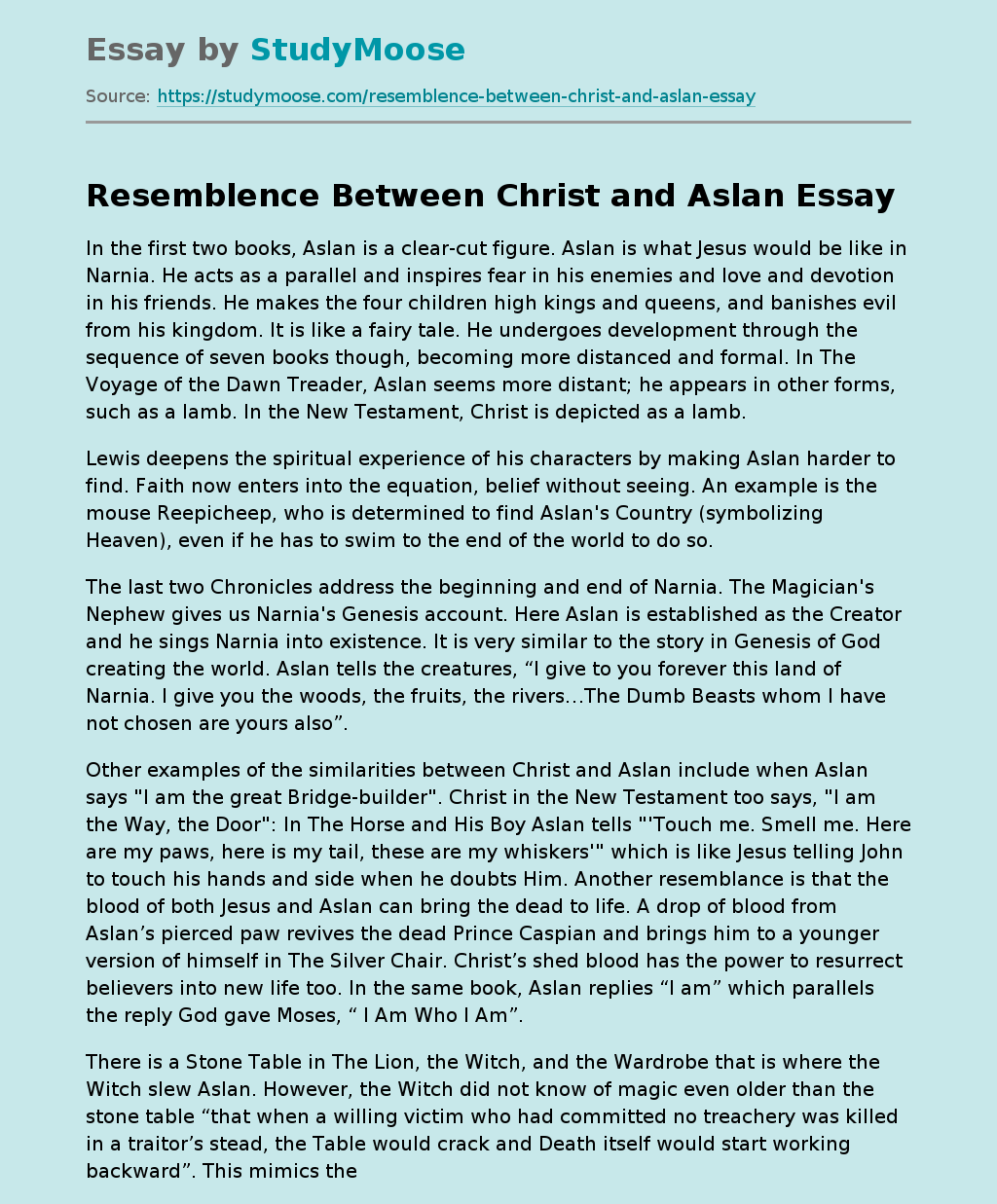