Research is not limited to what has already been written or found at the library, also known as secondary research, but individuals conducting research are producing the articles and reports found in a library database or in a book (Driscoll, 2011). Primary research is research that is collected first hand rather than found in a book, database, or journal and the ultimate goal in conducting primary research is to learn about something new that can be confirmed by others and to eliminate our own biases in the process (Driscoll, 2011).

Don't use plagiarized sources. Get your custom essay on
“ Research is not limited to what has already been written or found ”
Get custom paper
NEW! smart matching with writer

Primary research is extremely useful when there is a need for information that does not have a lot of publications about, which might be because the mentioned problem is not something that is is not commonly studied or it is a fairly recent event. There are three usual ways in which a primary survey can be conducted. Observations are used to look and measure the world around, including observing people and the events they participate in.

Interviews include asking the participants questions either in small groups, or one-on-one. And surveys are conducting a short questionnaire and asking the participants about their opinions and experiences. Surveys are usually used when the information needed is about a general trend in people’s behaviours, opinions or experiences. What is more, they are very useful to find information from a wide range of people in order to be able to make a general claim or to state a trend. Interviews can also be used. However, details from fewer people are obtained and to be able to learn general patterns from more people, surveys are more appropriate.

Surveys can contain quantitative (numerical) and qualitative (written answers/descriptions) data (Driscoll, 2011). Quantitative data can be analysed using a spreadsheet program like Microsoft Excel to calculate the mean (average) answer or to calculate the percentage of people who responded in a certain way (Driscoll, 2011). You can display this information in a chart or a graph and also describe it in writing in your paper and if you have qualitative responses, you might choose to group them into categories and/or you may choose to quote several representative responses (Driscoll, 2011).Because this research includes human participants, research ethics have to be considered. Students conducting surveys have to make sure that they follow their university’s ethical guideline in research. Voluntary participation means that in most of the cases, permission has to be obtained from the people involved in the primary research before proceeding further. Participants must first agree to fill out the survey or to be interviewed (Driscoll, 2011). However, in some cases obtaining consent can difficult. Confidentiality and anonymity mean that the participants might reveal potentially damaging or embarrassing information about themselves or others and in these cases, their identity should be kept anonymous when writing the results (Driscoll, 2011). Thanks to the survey engine used in this research all the identities of the participants are not known even by the team conducting the survey. Lastly, researcher bias refers to the fact that there is no point of conducting a survey if the answer to it might be already known. Bias might be present in the way notes are taken, or questions are asked, or the conclusions that are drawn from the collected data.This survey had the purpose to study the current ways of communicating within SPECIFIC and to gather information, which was used to improve the internal communications strategy. The survey was carried out by Business Management students in their final year of study at Swansea University. Replies are confidential, nobody could be identified from their answers. All replies were aggregated with others. Survey response implied that consent was given to include the participant’s data in analysis. All participants were free to withdraw from the survey at any given time and it was not compulsory to be completed. The answers were used to improve the communication process for SPECIFIC. Copies of the report are confidential to SPECIFIC but information about the results are made available by the company research coordinator.The results from the survey indicated that the current staff is generally satisfied with the current level of communications and that the most prefered way of communicating is through email face-to-face. However, the qualitative data showed that there is very little or none information about the new employees in the organisation and that people feel like they are working with strangers. Nevertheless, as seen on Figure 4,1 and 4.2, the levels of communication between managers and employees are low. This research has shown that people are more comfortable communicating through email, even if that means they will receive tons of information that they do not need or they might miss something they do need. Following the initial survey about current communication at SPECIFIC, secondary research was carried out to try and find the best communication software to trial. The three that it was narrowed down to were Yammer, Facebook Workplace, and Slack. These were then presented to the business contact for confirmation of doing the trials on these. We showed the positives and negatives of each software and why we thought it would be a good fit for the Centre. However, Microsoft Teams was added to the list of platforms after a suggestion from the business contact. Through secondary research, Slack was found to be too complicated for the organisation and was replaced by Microsoft Teams. Secondary research was also carried out to do with how important effective communication is in an organisation and gave examples of case studies where using a communication software worked effectively. An example of a case study we looked at is from the 2012 paper on the impact of social media on internal communications (Huang et al., 2012). This paper looked at how the use of social media inside three separate companies improved company practices. This was through suggestions from employees on social media platforms as well as platforms which had information related to branding, strategies, and values. The three platforms that were chosen because we felt it gave the employees a wide range of options due to the differences in the software. For example, Facebook Workplace was found to be the most informal out of the three. However, Facebook’s data scandal, which affected 87 million users, has affected its brand image and could be seen as untrustworthy to some customers (BBC, 2018). Facebook Workplace was the most formal of the three platforms and was compatible with Office 365 applications which we hoped would make it easier for employees to access their files and emails. Lastly, we looked into Yammer, which proved to be a good middle ground between Facebook Workplace and Microsoft Teams. Its informal nature would be appealing to some workers but it is not as distracting as Facebook Workplace. We thought that the more informal the software the more likely it could distract workers from their actual work.

Research is not limited to what has already been written or found. (2019, Aug 20). Retrieved from https://studymoose.com/research-is-not-limited-to-what-has-already-been-written-or-found-essay 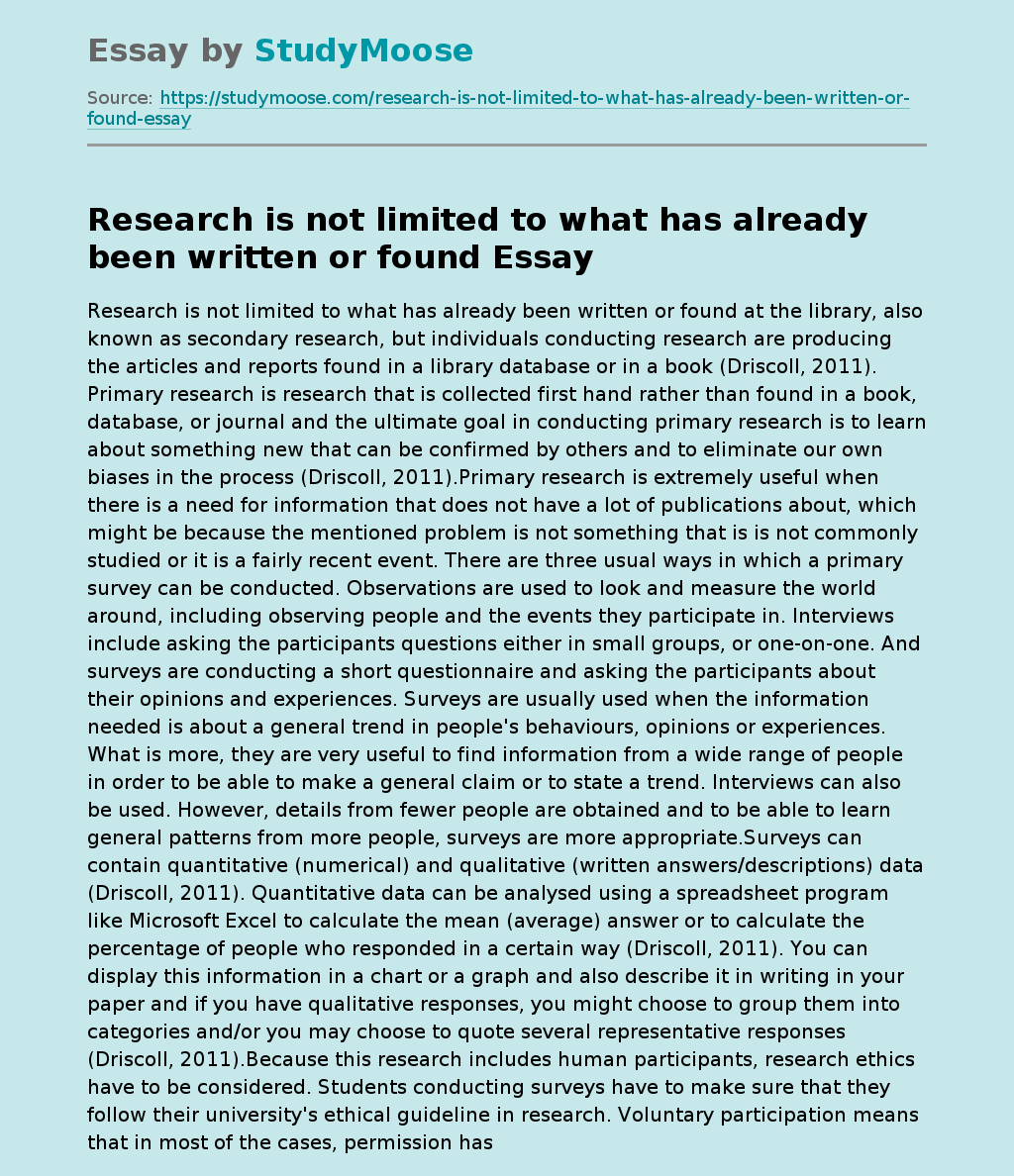