Exist two main periods in the history of Western art. Many artists were working on the creation of music, paintings, literature pieces, etc. Many features are characterizing these art periods. There can be both similarities and differences detached while analyzing these two art streams. These cultural movements influenced each other significantly and contributed to the enrichment of the world art heritage.

Italian painter, architect, historian of art, Giorgio Vasari determined the cultural movement of the historical epoch, which started to develop on the early the stage of establishment of bourgeois relations in Western Europe, first introduced the term «Renaissance».

Don't use plagiarized sources. Get your custom essay on
“ Renaissance and Baroque Comparison ”
Get custom paper
NEW! smart matching with writer

This grand cultural movement revived a new life. The Antiquity after a thousand years of its oblivion was renewed in a modern apostasy, being best in the decaying Middle Ages. There was a hope that it will open up prospects for the development of the Western culture of the New Age.

The characteristics of Renaissance art about the culture of this era are not accidental.

It is in Italy, in the homeland of Antiquity, that the ancient ideal of a beautiful, harmonious person was restored. During this period of some creative renewal from the eyes of people like a sleepless sleeping and artists suddenly saw an exquisite, felt harmony with nature. Human again becomes the central theme of art. From Antiquity comes awareness of the fact that the perfect form in nature is the human body. The humanist culture of the Renaissance is imbued with the dream of a new man and his new spiritual development.

For Renaissance, the perception of Antiquity is already a distant past, and therefore – as an “ideal that you can quench,” and not as a “reality that you can use, but also to be afraid of.”

Antiquity at this time becomes an independent value. The Renaissance began to perceive a person as a microcosm. A human bared a small likeness to the vast cosmos, the macrocosm, in all its diversity. For Italian humanists, the underlying factor was the orientation of human towards oneself. A human became open to the world. The fate of each person was mainly in his or her own hands – this is a fundamental difference from the perception of human in the Ancient World, in which one was valued by the degree of involvement in the world of the gods. In addition, the artist in the Renaissance period was perceived primarily as an individual, as a personality, as such.

The baroque art stream emerged in Rome in XVII century, moved to Europe and quickly expanded to the Southern American world. Baroque art definition fully corresponds to the character of the absolutist regimes and the Church of the Counter-Reformation era, which decided to challenge the art to persuade, excite and amaze the believer within the program of the celebration of the Catholic Church. Baroque embodied new ideas about the unity, boundlessness, and diversity of the world, about its dramatic complexity and eternal variability.

Characteristics of Baroque art embodied various contents. At first, baroque had an offensive shade, meaning something strange, absurd. From the mannerism stream, baroque art inherited dynamism and deep emotionality, and from the Renaissance – thoroughness, and splendor: the features of both styles harmoniously merged into one single whole.

While analyzing the features of renaissance vs. baroque, it is possible to distinguish both differences and similarities. It is better to start with the contrasting of the most prominent features. As for the Renaissance stream, artists began implementing the application of oil paintings, aerial and linear perspective, chiaroscuro. It is also characterized by the variability of forms and structures in sculpturing. The human was in the center of the art focus. The cult of a powerful man was renewing intensively. The renaissance style is characterized as precious and very pompous. People were allowed to implement the ideas they bear in their souls. Artist was working on the creation of paintings, which demonstrated the ideals of beauty of that historical period. The most prominent representatives of that epoch are Leonardo da Vinci, Raphael and Michelangelo

While analyzing the art pieces, the most famous icons were Virgin Mary. Religious images were widely applied by Leonardo da Vinci. Among the notable paintings by da Vinci, there were Mona Lisa and The Last Supper. Leonardo perfectly mastered the art of depicting the type of ideal man of the Renaissance. He was a universal genius: an artist, a sculptor, an engineer, a jeweler and a poet. His life was associated with Florence. Disciples always surrounded him. Leonardo’s whole life recognized the world through two forms of activity – a scientific and creative, complementing each other.

This artist went through a long way of life, witnessing not only the culmination but also the decline of the Renaissance. He was both an architect and a painter, however, preferred to create sculptures. The central themes of creativity of the artist: human, mythological, biblical subjects. Michelangelo’s list of artistic achievements comprises of the Sistine Chapel frescoes, the sculptures “David,” “Moses,” “Pieta,” the chapel of Giuliano Medici.

Raphael earned the recognition thanks to his School of Athens. He was a brilliant son of the Renaissance – a multi-faceted artist, architect, master of monumental painting, an unsurpassed portraitist, an exquisite fashion designer of his time. He had a talent of extraordinary power and energy. The works of Raphael are marked by insight, harmony, elegance, and flexibility. The genius was working in a constant passion for reaching perfection.

In the Baroque period, a human was in complex interrelation with God. Artists combined both Christian and ancient tradition and appeared melting of those two. Artists believed in high spiritual abilities of a human that do not correspond to nature of humankind. Prominent representatives of a Baroque painting by the Italian Michelangelo Caravaggio and Dutchman Peter Powell Rubens.

Rubens Peter Powell – the great Flemish painter, drafter and colorist unmatched, head of the Flemish school of painting in Baroque style. He was an architect, outstanding collector, connoisseur of numismatics, political leader, and diplomat. His pictures are very typical of the Baroque epoch; however, have its national characteristics. Primarily, the dominance of a sense of dispassion, detachment of the entire mystery, physical strength, sensuality, capturing nature (“Duke of Lerma on horseback” “Subjecting the cross” and “Removing the Cross,” “Perseus and Andromeda,” “Adoration of the Magi,” etc.). All people depicted in the paintings are in motion. Even the old plots the artist chose dynamically.

These two epochs became a cuddle for the most prominent people in the art. Along with the change of forms and colors, there was a change of people’s perception of the world around and themselves as well. The human from the periphery moved to the center of the art and literature. The focuses were changed. The new rules and standards were established in the artistic sphere.  There were similarities and differences between Renaissance and baroque streams. Artist of these both epochs have contributed significantly to the formation of the world’s culture and artistic heritage. 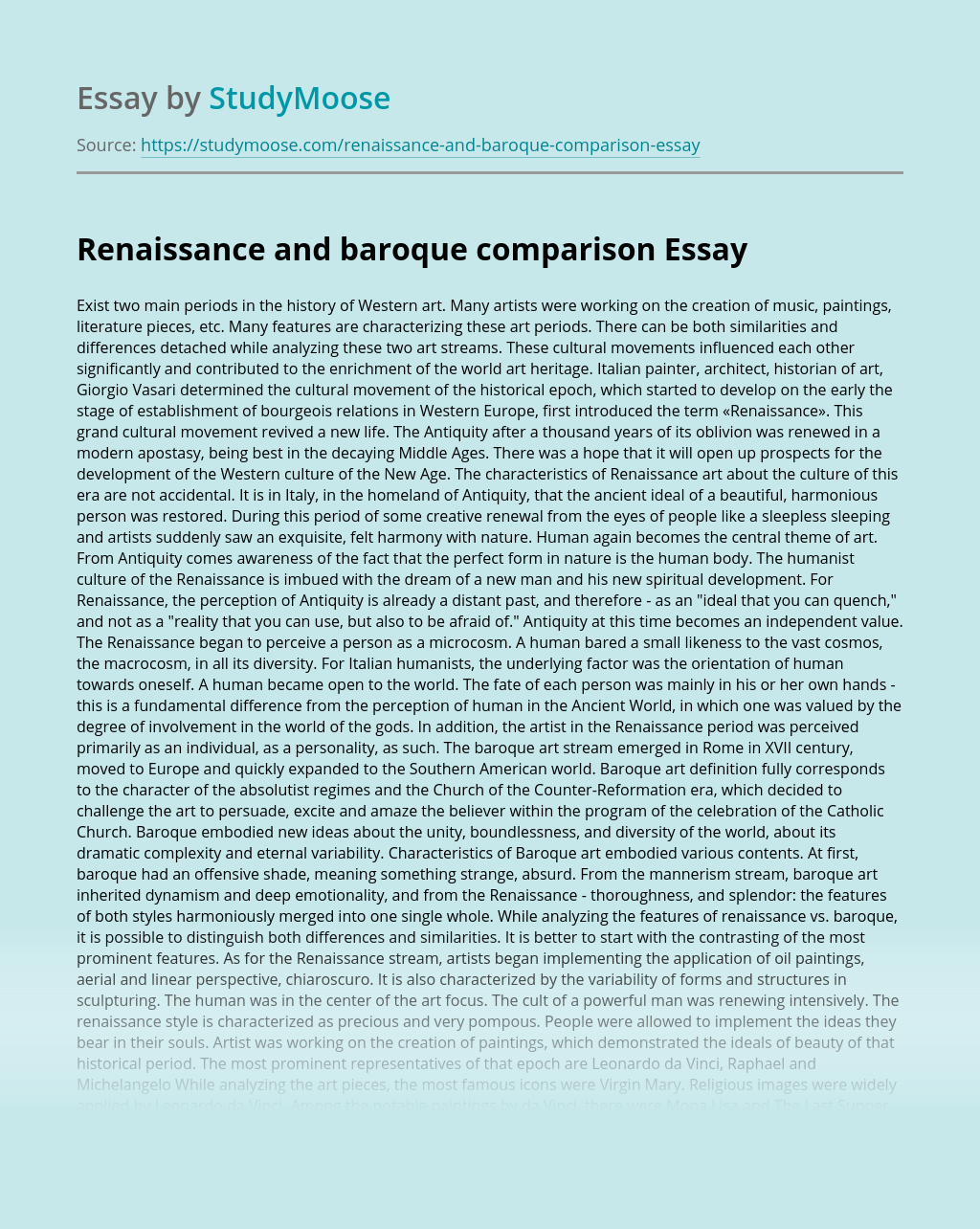