Religious teachings often begin with the ideals of finding inner peace, or aiding those in need, yet, over the centuries, these religions have merely become a means of facilitating the ambitions and desires of those who are in power. Many faiths disguise and warp themselves in a way that sets reality aback, and makes individual existence seem all the less valuable. Over millennia, scriptures have been modified countless times, becoming form-fitted duplicates that vary according to the era, or to whatever purpose such an alteration might serve.

Don't use plagiarized sources.
Get Your Custom Essay on Religion in Modern Society Just from $13,9/Page

Recently (relatively speaking), the addition of the media has served as a method of promotion and persuasion, ranging all the way from trivial, street-side advertising to mass conversions and the attempting of subtle, influencing techniques. Worst of all, innumerable lives have come to a horrifying and ghastly end simply because of conflicting beliefs… and there is no end in sight. Religion, as it has developed, has become harmful, and, contrary to its original purpose, a terrible burden to society.

All religions, no matter who believes in them or where they originated, are convinced that they are the primary source of all correct thought and righteous action. It is widely known that, no matter who is preaching to you, they are telling you that what they believe is the truth. The fact is that all religions began as word of mouth or a generalized belief. These have been put into writing, rewritten, translated, outdated and rewritten once again. Its not likely that everything in such scriptures should be taken as the absolute truth, with no room for compromise or alternative. Believably, thousands of facts that could clarify a topic were lost in the process of doing exactly that.

Such views of absolute and total engagement with the scriptures will mask the true meaning of the religion as a whole, and will deter the logical reasoning and thought processes incurred by reasonable doubt. Reality can no longer function in a place where there is no independent thought, and that is why so many people are misinterpreting their religion, and taking it far to literally. Errors in judgment, occurring over millennia, have resulted in terrible consequences to both believers and non-believers. When religion provides such simple answers to the most complex questions, it even demotes the research into and further development of our society as a whole. Without such answers we will remain primal and inadequate, and our evolution may grind to a halt.

Many religions are becoming wide-spread epidemics, as they are opening their arms and gathering those who would otherwise run astray. The culture in which one develops will (with some exceptions) solely determine one’s religion and, overall, their moral code and beliefs. When outside influences begin to affect these cultures, people begin to question themselves and all that they believe. This is what the media, the missionaries, and even local societies are developing into: a campaign of cultural uniformity. Christians, for example, have intruded on African soil for centuries, claiming that they are rescuing the countless souls from certain damnation. I am sure that what these independent (even secluded) societies really wanted to hear was that: if they do not believe in exactly what they are told to, they are doomed to spend an eternity in the fiery depths of Hell.

Granted, there is a certain period of transition during the attempted conversions. This is a period where the Christian religion seems to adapt to and encircle the given culture, twisting its scriptures to properly conform to the situation. Yet, this is simply an easier method of religious transformation, and it shows no consideration for the subjected peoples or the catastrophic revolutions that they are about to be included in. Even the obvious presence of churches or the not-so-obvious clergy affects the mentality of those exposed to it. There appears to be no other alternative, and, therefore, society will bias their views according to those of the religion that engulfs them.

Not all religions, nor all people of these religions, are as horrible as I may have portrayed them: quite the contrary. There are those who are ‘true believers’. They show a unique respect to peoples of other faiths and beliefs, and understand (more in retrospect than anything else) the trouble that fanatics of any religion may rouse. Their presence brings no consolidation, though, because these people have no real power. They are the ones that sit back and contemplate the whole purpose and meaning of their beliefs. It is the ones who want action (which may be seemingly positive, with a unbeknown negative impact) that are willing to step to the forefront and deliver the righteous justice this world has been awaiting. Insightful, and truly ‘righteous’ individuals do tread our Earth, but all hope of their resurgence seems lost once it is realized that these people are a rare breed, and that mating season is long over.

The amount of individuals massacred because of their beliefs is uncounted. Religion has served the purpose of allowing an excuse for very heinous criminal acts, which often occur in mass proportions. Our Christocentric society can only see one facet of a whole, and we regard the beings that worship such gods as Ala (SP) as horrible sadists when they kill in his name, yet this is the most prominent and ignorant form of hypocrisy to date. Many Christians unknowingly believe that, because they worship God and Jesus Christ, they have the given right to use His name to serve their own designs. This is likely one of the worst possible misinterpretations, and has inarguably the most irreversible consequences. Ruining other human lives, not only those of the ones that are killed, captured, raped, or tortured, but those of the loved ones close to them, is no honourable sacrifice.

God (or any other true god-like being), would not condone such actions, even if it were for the sake of his children. Nations can instill massive propaganda campaigns, and pound the martyr-related beliefs into their citizens skull’s, with little or no retribution. The citizens (mostly those of the applied faith) will be convinced that their god wills these actions, and that it must be done for the sake of their future. The best example of this is the ‘Ku Klux Klan’, who has taken the Christian belief to a totally obscene level, and deciphered their base-religion in an unbearably clumsy manner. It seems a horrible fate, to be ordered (by your god, of course) to leave everything behind and quarrel over something that will so obviously never be resolved.

With all of the trouble in our world today, its disconcerting to know that religion is a contributing factor. Even more so after we have been told of the attributed attainment, and the possibility of its bliss and sanctuary within our miniscule existence. All of our misguidings, misdirections and misinterpretations are being unraveled, and worsening throughout the course of time. This, and the subjective persuasion and manipulation we bestow upon ourselves will convey our impending death and destruction, as it may inevitably continue to contribute to the spiraling degradation of our existence in this universe. 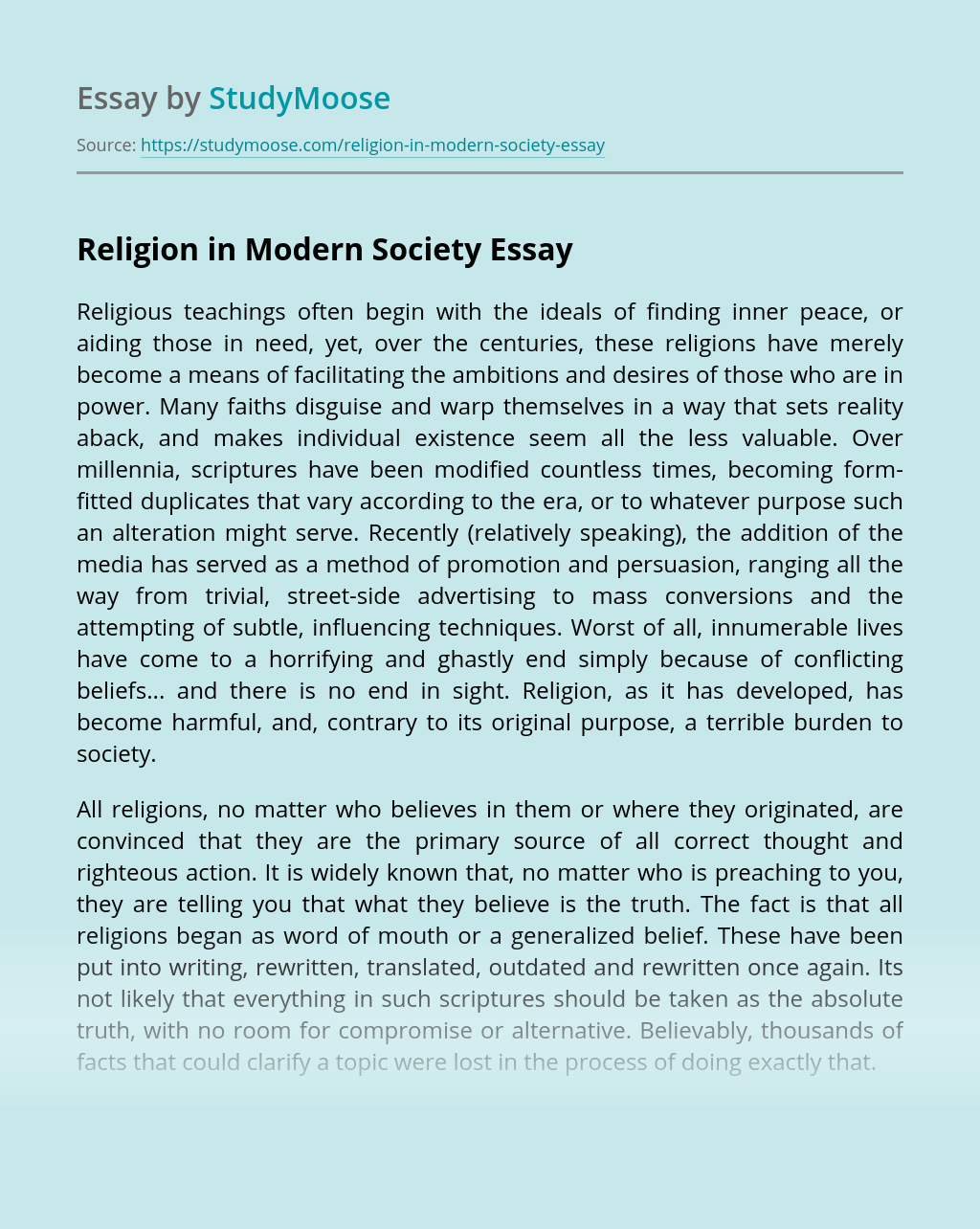 The Cultural Economic and Political Impact of Islam on West Africa

Between 1000 and 1750 C. E. Islam entered West Africa and increased its trade, many Islamic states rose and fell, but many aspects of African religion and gender roles remained unchanged. Between 1000 and 1700, Islam caused West Africa to experience an increase in trade and economic activity, the rise and fall of several Islamic...

Introduction Practices of the Muslim religion have become of great concern in the contemporary society especially in issue of world peace. Islam values and beliefs have raised controversy between followers and non-followers where the latter criticize the religion as threat to peace. This paper will explore teachings of the Islam religion to provide understanding of...

During the time period between 300 CE and 1450 CE the Indian Ocean Trade was consistent of its spread of goods, religion, and the growth of trade route under different empires. On the other hand, the significant changes were the ways of trade, diffusion of religion, and empires controlling the trade route. Economically, the Indian...

Our religion gives us the enlightenment to do what’s best not only for ourselves but for the entire realm that we belong as well. It serves as our guide to the path of wonderful thoughts and bright actions which will come to light to the personality that we possess as of the moment. What will...

INTRODUCTION The topic of Islam never fails to deliver passion from those who attack it, as well as fierce support from those which practice Islam. This passion results in dogmatism within the Muslim community and fear from those that do not understand its teachings. Unfortunately most Americans and Christians only associate beheadings and burka clad...