The Role of Satire in Modern Society

Today, humor, irony, exaggeration, and ridicule can be seen in almost every circumstance imaginable, and often times it is accepted in any context, whether it’s appropriate, or it’s for good or bad intentions. These components combined are known as satire, which is a form of rhetoric. Satire is a key factor in a democratic society that is ruled by the people. This can be seen in the United States of America. In a democratic society, we have the right to use satire in anyway we desire.

Don't use plagiarized sources. Get your custom essay on
“ The Role of Satire in Modern Society ”
Get custom paper
NEW! smart matching with writer

With this option, we as humans value it to the point where we use it as not just a joyful factor, we use it to break ice, confront uncomfortable topics, and or reform a serious topic to a “joking” manner. In other words, we use it for exposure. Satire can be found on many worldwide platforms such as the internet, television, radio and in literature. Commonly, these platforms use the key theories of humor to help form their satire to best suit the desired message and audience.

This procedure can help the platform direct the audience into the intended reaction, whichever that may be. In my opinion, satire plays an essential role in maintaining a democracy by creating a way to broach taboo subjects.

Satire has been around as long as politics and government were formed, and existed well before it was formalised. The ancient Romans were the first to define the literary genre of “satura” which has been shaped into today’s term of “satire”.

Satire has been a way people communicate for ages and has been a crucial factor in the way the community functioned because of its profounding influential effects on people. Satire is a mode of discourse that blends humor and criticism for the purpose of instruction and improvement of humanity, or a society. In other words, according to an article Laughing at Power: Satire and Democracy by Christopher Beanland, “Satire is the revenge of the intelligent on the privileged – it is there to prick pomposity and to check power. As the late Molly Ivins once said: “Satire is traditionally the weapon of the powerless against the powerful.” It is, in this sense, a true expression of democracy – a way for the people to have their say.” Meaning even when we “don’t” seem to have power in our voices, through satire we always do, especially in a democracy where we have freedom of speech. Messages that would be typically be ignored or punished if absurdly stated in other countries are reaching millions of people through a satirical form here in America’s democracy. Conceivably, satire may be the most powerful tool that critics have to get their opinions out into the world, and it is making a real difference.

There are two different forms of satire, Juvenalian or Horatian. Juvenalian satire is known to be a lot harsher and alot less funny. Where as horatian satire which is gentle, self-deprecating humor to make fun of general foolishness. An example of Horatian satire from an article “An In-Depth Understanding of the Types of Satire With Examples.” by the website Penlighten, are quotes seen in two different movies; first being, “Dr. Strangelove (‘Gentlemen, you can’t fight in here! This is the War Room!’); another being, Monty Python’s Life of Brian (‘He’s not the messiah, he’s a very naughty boy!’)” These phrases exaggerate the tactics of specific, socially relevant concepts to show their absurdity. An example of Juvenalian satire can be seen in Swift’s book, ‘A Modest Proposal’. Where he provides “a much more outraged and personal piece of satire, where Swift proposes an outlandish solution for England to deal with the ‘Irish problem’-cannibalism” (Types of Satire Examples). In these examples you can see the differences between the two types of satires; where one is humorous and approachable, and one where a whole book is dedicated to bizzare, harsh solutions.

I find Horatian satire to work best in a democratic society because of its particular approach of exposure. As there are needed times to use juvenalian satire, if having the intentions to cut to the bone, it’s not the best approach as it’s particularly rude and makes uncomfortable topics even more uncomfortable. Some might find Horatian satire to be “weak” or that people are just to “sensitive” when talking about real, uncomfortable topics. Though, in the bigger picture if you’re wanting to expose an issue that you eventually want to be resolved, the best approach is to use Horatian satire. With this, a democratic society is a perfect home for horatian satire, simply because of it’s sympathetic tone which commonly wanted in our modern society. As we are just all humans that are constantly trying to figure out and resolve issues, this approach is not only more appealing, amusing, and understanding it’s just a good-natured way of exposing taboo subjects for maintaining a democracy.

The show Last Week Tonight is an American late-night talk and news satire television program hosted by comedian, John Oliver. His satire is based on echoing popular opinions or government officials’ ideas and exposing them to his audience, to reveal their hypocrisy. This show is a great source to see how horatian satire is utilized to transfer important information to the audience with the help of humor and its key theories. As it strictly performs satire, it can help maintain a democracy by morally exposing flaws, critique society and or politicians, and ridicule politics. Some who are unfamiliar with satire can title John Oliver solely as a comedian, not as a satirist. However, it’s important to recognize John’s intelligent creativity in way he presents his satire. He performs satire while weaving in humor. As humor has many positive benefits it can help John reach citizens in a democracy where we have the freedom to take a chance to influence people’s opinions.

Satire often times gets interpreted as another form of humor, though this is false. This confusion comes from the laughter which is sparked from the content being presented in satire. Though while both forms provoke laughter, satire and humor have different intentions and outcomes. Despite this common misinterpretation, satirist still use material that will intentionally provoke laughter; the reason being that laughter has strong benefits in creating engagement, which allows the message being told get across to the audience better. In the book “HA! The Science of When We Laugh and Why” by author Scott Weems, a cognitive neuroscientist provides readers with the knowledge of what humor is and how humor is closely associated with nearly every aspect of human cognition, because it helps us cope with incongruity, ambiguity, and conflict; while explaining and supporting his idea “that humor and it most common symptom – laughter – are by-products of possessing brains which rely on conflict. As a result, they constantly deal with confusion of ambiguity, our minds jump the gun, make mistakes, and generally get muddled in their own complexity.”(xiv) This creates a reason for us to laugh at anything, and for satirist to use humor as an enhancing effect on the message they wish to portray.

The use of comedic elements can create laughter which then creates a positive outlook and atmosphere when trying to maintain a democracy when exploiting touchy subjects. Though it’s important to understand and remember that humor has been around since humanity began and is a more commonly to be seen, where as satire has not; satire was a developed method of rhetoric. With time comes lots of opinions, and through this time humor has received both a positive and negative reputation; some might find humor insulting or childish when laughing at touchy subjects which satire mostly speaks upon. This can cause people who get satire and humor mixed up do not think that satire is an essential role in maintaining a democracy because of humors “unreliable”, “unresponsible”, background. However, its morelikey to see laughter as a result from Horatian satire rather than Juvenalian satire.

The key theories of humor to help convey the audience’s opinion towards the satirist point he/she is trying to prove. Humor can reach people in many ways such as providing the ability to release feelings or desires towards someone or something. The key theories of humor help explain the mechanics of humor. Using these mechanics can enhance satire in a positive manner. Out of many theories of humor, some theories in particular, ambivalence theory, and the cognitive theory, best serves a democratic society by inhasing satire. These particular theories help enhance satire, and or bring relief of conflicting feelings or emotions that can arouse from how satire works in a democratic society.

Comedy is a great attention grabber which is why satire is so beneficial in a democracy where we are aloud to express humor. The key theories of humor can help the comedy aspect of satire. Former psychology professor Author Leon Rappoport in his essay “What Makes Us Laugh” which located in chapter one in the book, “The Rhetoric of Humor” examines research on some of the most prominent theories on humor; theories that primarily concern the mechanics of humor. Leon explains that humor is an intriguing topic for psychology. So intriguing, efforts to research and theorize about humor started the late nineteenth and early twentieth century. As these early research experiments took place, funding was to low to keep researching. Though this did not stop psychologist, it only started a continuous path of curiosity, which lead to the urge of research. In the 1970’s, Patricia Keith-Spiegel, stimulated the topic of humor by doing a comprehensive review of humor and identified several different approaches to the topic. Each distinguishing a similar theme that “humor is an instinct that must have evolved to serve some important purpose for adaptation or survival.”(Rappoport, 14) She puts these ingenious speculations about the origins of laughter and humor in the beginning of her essay to give a little history on humor of where it all started, and to give readers a foundation to help them understand where these major theories started from.

The theories of humor help satire by not only bringing comedy witch is a highly desired action, it also directly influences our brain thought processes. Satire uses two theories of humor to help strengthen its impact on audience members. One being the ambivalence theory; which suggests that “laughter occurs when we experience conflicting feelings or emotions.”(Rappoport, 17) The ambivalence theory in common situations, for example, when someone makes a joke while attending a funeral; this can lead people into a roller coaster of mixed emotions. Having fear in one hand, and at the same time excitement and mastery of the fear, results in uncontrollable laughter. Leon then mentioned the cognitive theory, that is opposite of Ambivalence. Rather than focusing on the emotions, it emphasises the intellectual aspects of humor. This theory is put into play when the joke involves needing to know the proper information to understand it. Laughter then only comes from the joyful outcome of creative problem solving.

The Role of Satire in Modern Society. (2021, Apr 14). Retrieved from https://studymoose.com/the-role-of-satire-in-modern-society-essay 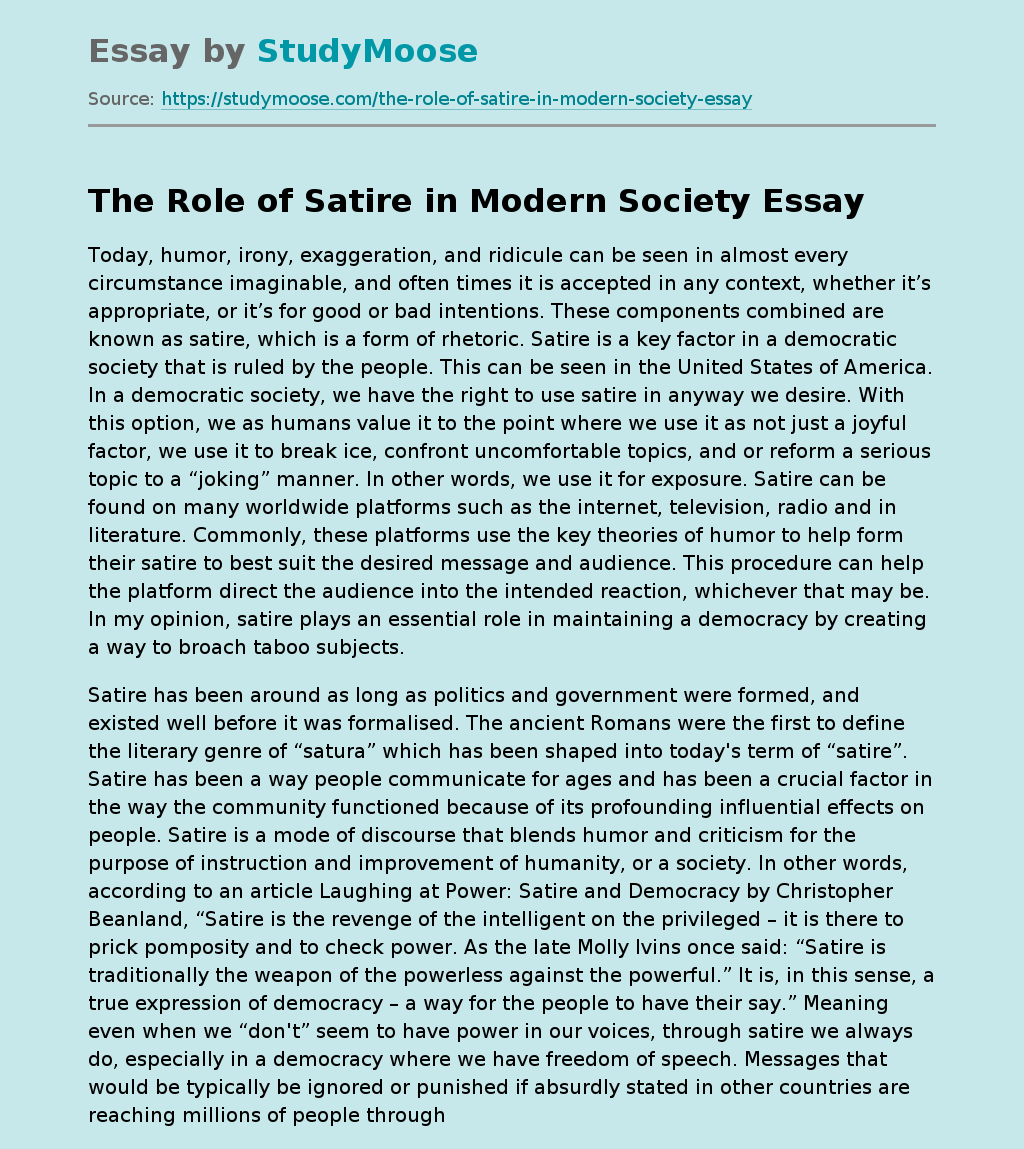