The Role Of Women In The Modern World

The role of women in society has been greatly overseen in the last few decades. In the early days women were seen as wives who were intended to cook, clean, and take care of the kids. They were not allowed to vote while men took care of having jobs and paying any bills that had to be paid. Women have always been mistreated and seen as inferior, when compared to men’s physical strength and ways of thinking. But with the development of industry, the role of women in modern society has significantly changed after the First World War.

Don't use plagiarized sources. Get your custom essay on
“ The Role Of Women In The Modern World ”
Get custom paper
NEW! smart matching with writer

Twenty first century has brought in its trail a new hope for women. Dramatic changes have happened in the role, ambitions and attitude of women. Women have departed from their traditional role of reproducers, mothers and wives only. From a non-entity, they have been able to establish an identity of their own in the modern society. Modern women have proved that they are second to none, whether it is home, or outside home at their workplace.

Even in areas which are far away from their traditional role as a housewife. With changing times, they have risen [ up to the occasion and managed the work both inside and outside the home at her work place. – such as in industry, media, IT, politics [], technology, administration/ management, armed forces or civil services.

At home, they bring up children with love and affection and manage household activities. They have shown their capability to deal with the recent economic depression with ingenuity.

Like a financial expert they meet the challenges of the present times of ever rising prices in their own income. Outside, they work shoulder-to-shoulder with men almost in all the areas. They are educated. Many of them are financially independent. Modern women are more aware than their predecessor of their rights and are keen to exercise them. They know their worth in within the family, in the society and in the world. It did not happen overnight. Women fought a fierce battle to reach up-to present position. They continuously worked hard to get equality, liberty and opportunity.

Despite women’s emancipation, there will always be a shadow of doubt when hiring a female. A recent study carried out by the University of London revealed that 70% of the big companies are still more likely to accept a man, just because he is a man, rather than a more experienced and competent woman. This reliable research proves that people’s way of thinking cannot be changed over night, diminishing women’s chances of success in their careers.

The Role Of Women In The Modern World. (2016, Aug 19). Retrieved from https://studymoose.com/the-role-of-women-in-the-modern-world-essay 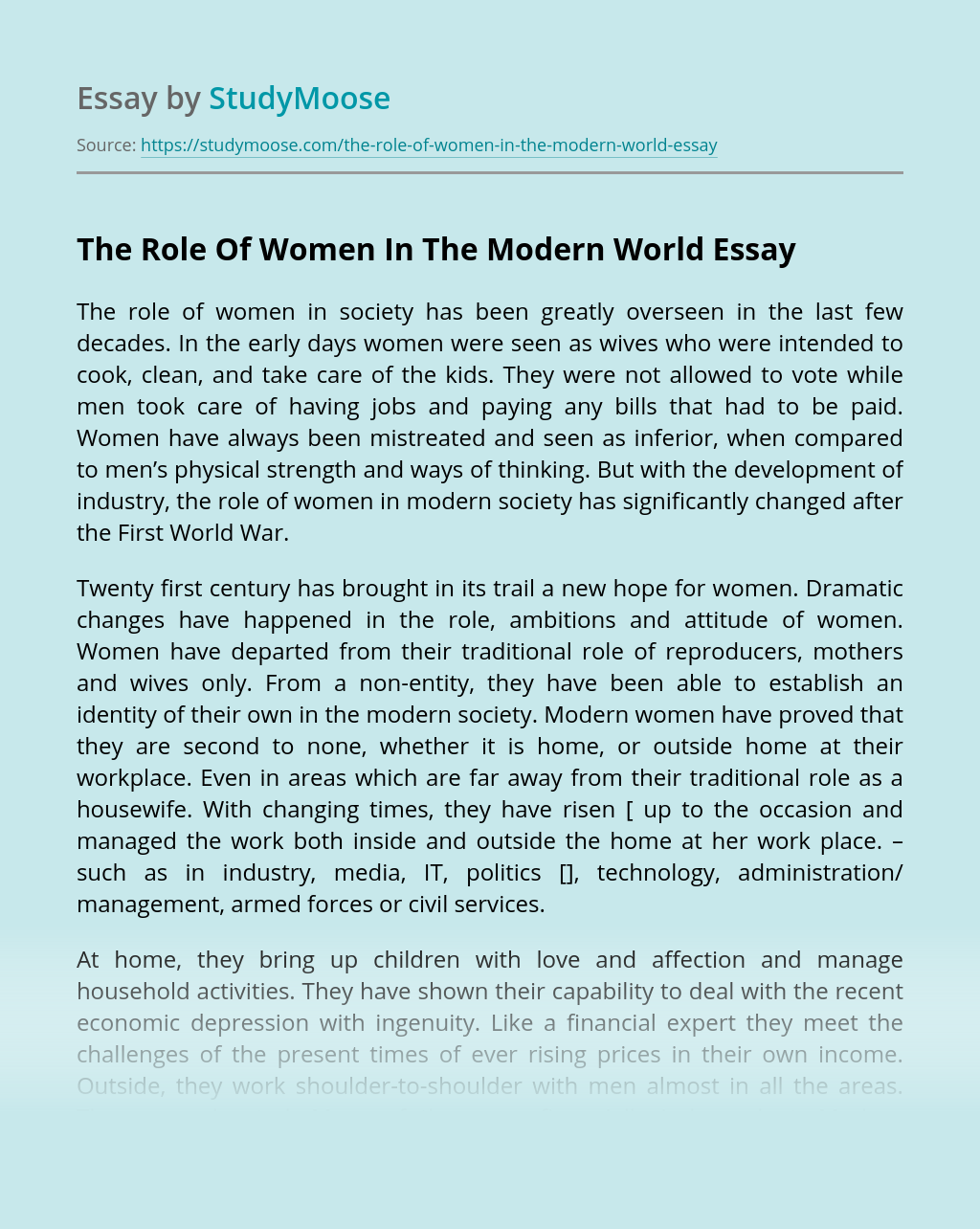