Examine the role of women in Romeo and Juliet

Shakespeare wrote the play Romeo and Juliet in the 16th century, a time in which the role of women was not to be a person in their own rights, but to be a wife to their husband and a mother to their children. Women had a specific place in society, and they were expected to conform to expectations of their positions. Women were owned by their husbands, and had little to no freedom from their spouses or parents. In the play, Shakespeare depicts this situation through the character Juliet and her relationships and role in society, a young girl growing into the expectations of women at that time.

Turn in your highest-quality paper
Get a qualified writer to help you with
“ Examine the role of women in Romeo and Juliet ”
Get high-quality paper
NEW! AI matching with writers

The theme of this essay is to examine the role of women in 16th century society i. e. Juliet, and contrast it to the role of women today. Juliet’s relationship with her parents is very different to what would be expected today. In the 16th century it was common for wealthy parents to employ a nurse to bring up their children, to be what a mother figure is like today.

Juliet’s relationship is typical of the period in which the play was set: her affluent parents employed the Nurse (who had given birth at the same time as Lady Capulet) to care for their daughter when she was born, and “wean” her.

A woman who had lost her own baby was an ideal source of milk for an upper-class infant whose mother preferred not to be troubled with doing her own nursing.

This meant that Juliet had a stronger bond with her Nurse than with her biological mother, a customary situation in the Elizabethan era. However, this did not mean that the Nurse would have had any more say in Juliet’s upbringing than Capulet and Lady Capulet. Parents have a duty to make certain decisions for their children, as they did in the 16th century, however at that time a girl or women would barely ever make her own decisions, these would be made by her parents.

In the play, Shakespeare places the character Juliet into a situation typical of the era: arranged marriage. At that time parents always chose a suitor for their daughter, regardless of her age or class. At this part in the play, Juliet’s mother enquires on her daughter’s “disposition to be married”. Here, Juliet behaves very uncharacteristically of the Elizabethan era, saying “It is an honour that I dream not of”, avoiding the proposal and demonstrating independent thinking. Lady Capulet has already made the decision for her daughter, and expects her to react dutifully as a daughter at that time would.

Juliet says “.. no more deep will I endart mine eye Than your consent to make it fly. ” Now she appears to be a model daughter, however she still acts uncharacteristically because she has not given her mother a straight answer, again avoiding the subject. Arranged marriage still occurs today, but it is not as common as it was in the Elizabethan era, so although girls are still put into this position they are still expected to conform to tradition and obey their parents’ decision.

Here Juliet seems to feel free to withhold her consent, which is definitely not customary of the 16th century. In the Elizabethan era, men had more power, opportunities and influence on society than women did. Women did not have equal rights and were seen as possessions not people. Just as a girl’s parents controlled her decisions and life, once the girl became and woman and was married, her husband controlled her. Husbands had expectations of their wife as much as parents had of their daughter; women were expected to behave accordingly, obeying their husbands.

Their role as a wife would be to comply with their husband’s decisions and bear him a family. At this time, women knew no other way of life, and so generally women complied with the traditions, unlike today in which women are seen as equal citizens in society. In the play, Juliet was expected to marry Paris and become his possession, with no love involved. Juliet would have reacted normally to this idea, as many young women dreamed of the idea of love, and when proposed to, would create their own form of love for their husbands, usually respect.

Many marriages were arranged by parents and were based on suitability, not love. Nowadays marriage is based on love alone, and parents have less influence over choosing a husband for their daughter. Lady Capulet’s role as a woman in the play is exactly what an upper class mother of that time would have been like. Lady Capulet was forced into marriage when still only young “And too soon marred are those so early made. ” After giving birth to Juliet at a very young age, she chose to employ someone else to nurse her child, which was also usual of a woman of that status.

In the Elizabethan era it was commonplace to have a Nurse bring up the child, as a mother would today. The character of the nurse would have been a recognizable type to Shakespeare’s audience. A woman who had lost her own baby was an ideal source of milk for an upper-class infant whose mother preferred not to be troubled with doing her own nursing. Babies were weaned by having a foul-tasting salve smeared on the nipple “laid wormwood to my dug”. The bodily intimacy between Juliet and the nurse creates a close motherly bond between them.

The character of Juliet was not a typical 16th century girl, as although she was faced with the same situations as a girl of that time, she reacted differently and did not conform to the traditions and expectations made of her. Shakespeare chose not to make the character Juliet conform because his play was a dramatic tragedy, written to entertain audiences. Juliet would interest an Elizabethan audience to watch as she was uncharacteristic of that time, and she reacted differently to what was expected.

Shakespeare chose to develop the female characters’ roles in the way he did so that the audience could relate and recognise these characters, making the play more interesting for them to watch.

Examine the role of women in Romeo and Juliet. (2017, Aug 30). Retrieved from http://studymoose.com/examine-the-role-of-women-in-romeo-and-juliet-essay 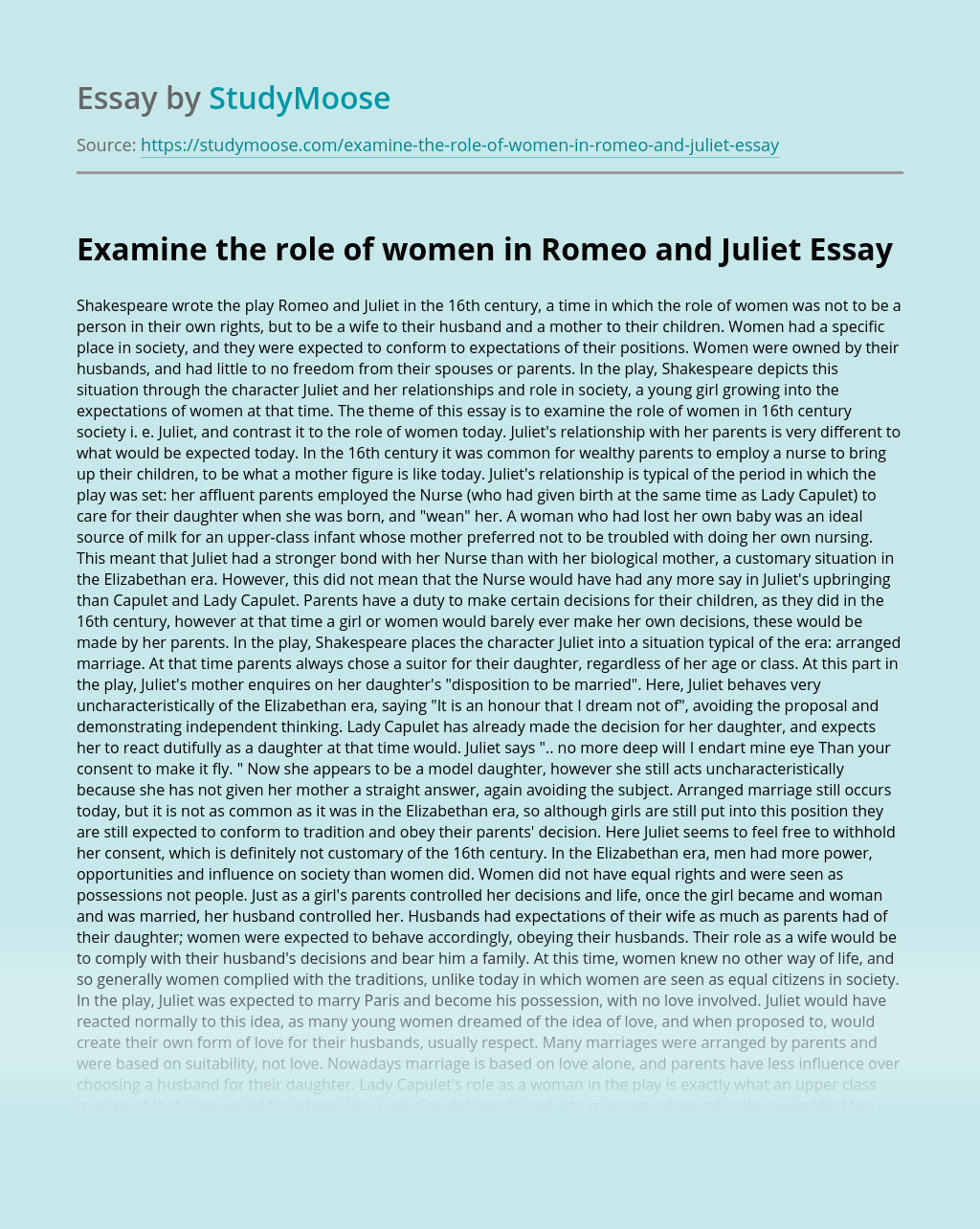 Turn in your highest-quality paper
Get a qualified writer to help you with
“ Examine the role of women in Romeo and Juliet ”
Get high-quality paper
Helping students since 2015
Stay Safe, Stay Original