Religion and Belief within Life of Pi

Throughout the novel Life of Pi the reader is faced with many recurring symbols and motifs to enhance the themes of religion and belief within the novel. It is most evident when analysing the main character Pi. He is faced with many challenges and has a great challenging uphill journey placed in front of him, but through his beliefs he is able to push through using many techniques along the way. Hunger and thirst, as well as the struggle for dominance and survival play a part in allowing his religious beliefs to clearly be illustrated to the reader.

Don't use plagiarized sources.
Get Your Custom Essay on Religion and Belief within Life of Pi Just from $13,9/Page

Furthermore, it indirectly allows the reader to better understand his views on life. Lastly, in the novel, the author uses certain religious analogies to enhance the understanding of the novel to the audience by describing a series of daily rituals that help sustain Pi during hard times. Rituals are used as an alternate form of storytelling, that use Pi’s beliefs to spread the teachings and illustrate the power of faith, by showing how a simple act of faith can save a life.

Imagine spending almost a year on a boat; on an island; away from home; without any family, friends, only your thoughts, hopes and faith to help keep you alive physically and mentally. Pi’s story is a tale in which “will make you believe in god” or just make you believe in humanity, because life even without god is still believing. Throughout the novel, each day Pi spends on the island or life boat, he prays and becomes another day wiser in each of his religions: Hinduism, Christianity, and Islamism. Even Pi acknowledged the falter of religion, “I know zoos are no longer in people’s good graces. Religion faces the same problem. Certain illusions about freedom plague them both.” This is quite ironic considering he is trapped on a boat with a tiger that would not be able to be free even if he was not on this boat. Moreover, religion to some seems unbearable, but to Pi religion and schedules is the only thing that seems to keep him sane.

Storytelling is an art which can save lives by giving hope or even false hope, by creating white lies in a time of need. For Pi storytelling is his way of showing others the true miracles and powers of life, even if they are not true stories at all. It’s a way of helping people to modify their beliefs or create new ones. “Without Richard Parker, I wouldn’t be alive today to tell you my story.” This quote is very direct, because he uses the reference ‘you’ to speak to the reader because he wants to show them his faith and how it doesn’t have to be ‘real’ to make it “the better story”. Lastly, throughout this novel rituals are directly related to storytelling because they give structure and relate ability to abstract ideas and emotions, which allow Pi to stay in his imagination longer, and as a result saves his life, because no boy is able to see the horror and go insane.

Pi’s beliefs are perhaps the main reason he was able to survive this tragedy. However one must wonder, was it god, or just a simple prayer and belief in fate? Pi is faced with unbelievable odds of survival with no food, water that is undrinkable, and on top of that must battle off the four hundred and fifty pound animal the he shares this life raft with. When Pi is saved and is asked all the questions, he remains calm and begins with the first story in which will allow people the opportunity to see the power of faith come alive. Even though it is not entirely ‘real’ Pi still considers it the “better story” because he is able to help more people, because animals are able to stand for something different, and allows the unbelievable part to re start the imaginations of people which seem to be buried very deep down.

“The lower you are, the higher your mind will want to soar,” isn’t just an idea, but a concept in which each of us live by but do not realize. In the two hundred and twenty seven days Pi must rise to that challenge by allowing himself to save not just his own life, but the ‘tiger’ who also was saving his. Pi needed to scavenge for his food as well as create drinkable water, a task in which only god could conceive, but even Pi was able to feed the man he calls Richard Parker, because in his opinion no life is worth not saving.

By allowing Richard Parker onto that life raft he showed his faith towards god, and also by him surviving and allowing Richard Parker to survive, god shined and showed his praise for having faith right back at him. There are many life lessons portrayed in the novel that the reader should be able to take away, one of the most prevalent was the idea of taking a leap of faith. After all who really knows what life might bring, one can only jump into water with both feet, unknowing how cold it actually may be.

In closing, in the novel the author uses certain religious analogies to enhance the understanding of the novel to the audience by describing a series of daily rituals that help sustain Pi during hard times. Rituals are used as an alternate form of storytelling, that use Pi’s beliefs to spread the teachings and illustrate the power of faith, by showing how a simple act of faith can save a life. Through this, Pi is able to manipulate his imagination and religion to save his life, in which it would change it after his terrible journey in where he was forced to look death in the eye and continue fighting. After the reader learns that there were no animals, they still take a message, even though it is not the “better story”. Life is a journey in which we all take part on, and after we read this heroic journey, we are able to look forward and re think the steps we take in order to create a “better story” for ourselves.

Religion and Belief within Life of Pi. (2016, Nov 28). Retrieved from https://studymoose.com/religion-and-belief-within-life-of-pi-essay 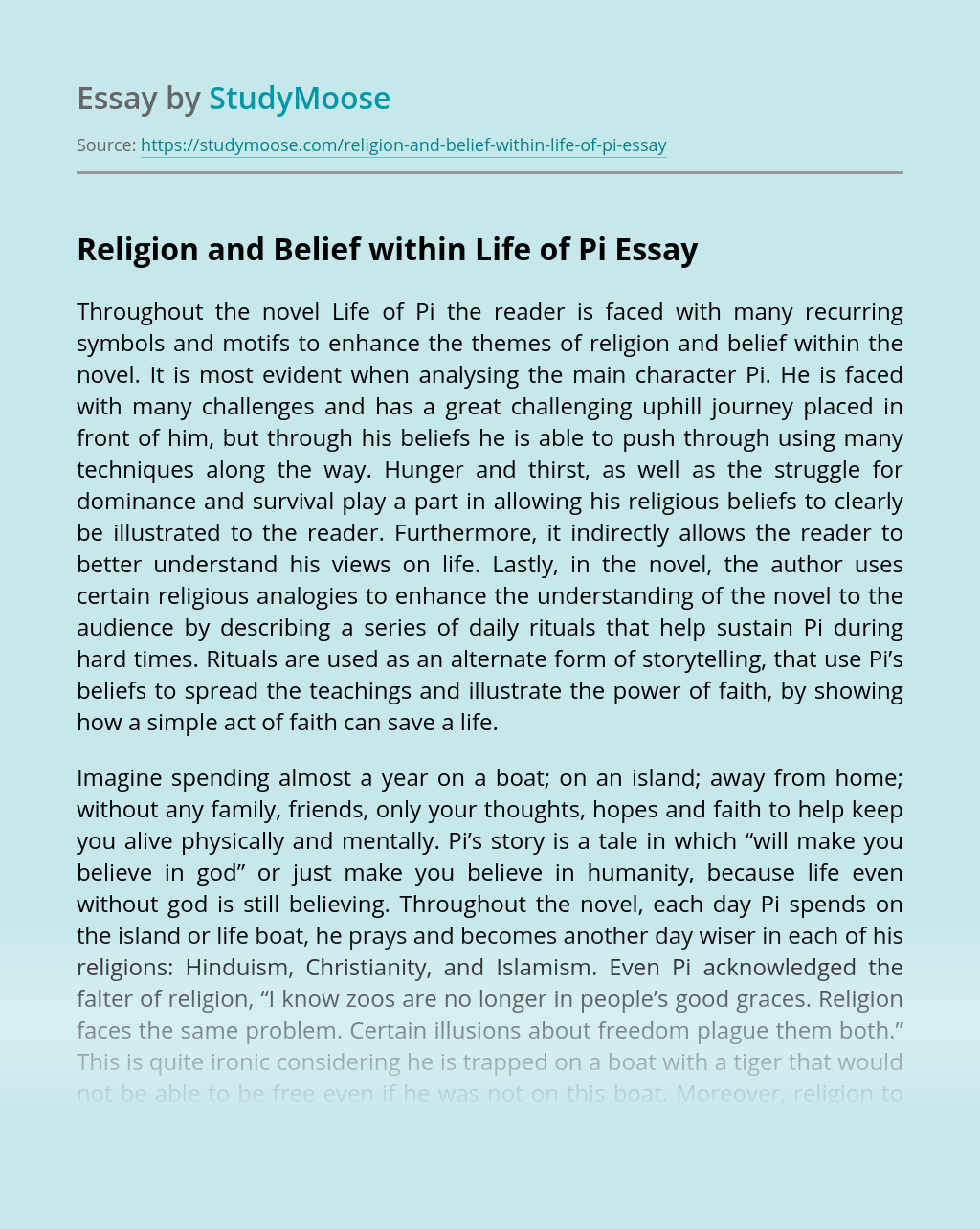 The project report entitled “Strategic Management Cycle of Baja] Auto Ltd ” . has been submitted to Gujarat Technological University, Ahmedabad in partial tultlllment tor the award of degree of Master of Business Administration. I the undersigned hereby eclare that this report has been completed by me under the guidance of Prof. Jignasha mam” (Faculty...

The Life of Saddam Hussein

Saddam Hussein was born on April 28th 1937 in Al-Awja, a small Iraqi town. At a young age Hussain fled from his abusive father to live with his uncle who was a devoted Sunni Muslim. His uncle had Saddam attend a nationalist secondary school and after graduating Hussein studied law for three years but didn’t...

Get Essay
﻿How Smart phone impact on Human life

World is ever changing and advancing in the science and technology. These days it seems hard to escape the presence of technology. Most people will praise the many technological gadgets that they use in their everyday lives. Many of us depend on it to get us through the day, to do our work, to get...

Within The Lotos Eaters and Choric Song, Tennyson portrays a life complimentary from toil, where the mariners remain in a consistent dream-like state. The mariners resolve to stop wandering the seas, and settle in the tranquil, carefree world. Contrastingly, Ulysses wishes to continue exploring the world and wishes for more adventure. Ulysses would think about...

Mandatory Life without Parole for Juveniles