Paranormal is a general term (coined c. 1915–1920) that designates(indicate) experiences that lie outside “the range of normal experience or scientific explanation” or that indicates phenomena understood to be outside of science’s current ability to explain or measure.Paranormal phenomena are distinct from certain hypothetical entities, such as dark matter and dark energy, only insofar as paranormal phenomena are inconsistent with the world as already understood through empirical observation coupled with scientific methodology. Thousands of stories relating to paranormal phenomena are found in popular culture, folklore, and the recollections of individual subjects.

Turn in your highest-quality paper
Get a qualified writer to help you with
“ Paranormal Activity ”
Get high-quality paper
NEW! AI matching with writers

In contrast, the scientific community, as referenced in statements made by organizations such as the United States National Science Foundation, maintains that scientific evidence does not support a variety of beliefs that have been characterized as paranormal.

Ghosts and other spiritual entities
A ghost is a manifestation of the spirit or soul of a person.

Alternative theories expand on that idea and include belief in the ghosts of deceased animals. Sometimes the term “ghost” is used synonymously with any spirit or demon,however in popular usage the term typically refers to a deceased person’s spirit. The belief in ghosts as souls of the departed is closely tied to the concept of animism, an ancient belief which attributed souls to everything in nature. As the 19th-centuryanthropologist George Frazer explained in his classic work, The Golden Bough, souls were seen as the creature within that animated the body.

Although the human soul was sometimes symbolically or literally depicted in ancient cultures as a bird or other animal, it was widely held that the soul was an exact reproduction of the body in every feature, even down to clothing the person wore. This is depicted in artwork from various ancient cultures, including such works as the Egyptian Book of the Dead, which shows deceased people in the afterlife appearing much as they did before death, including the style of dress.

A widespread belief concerning ghosts is that they are composed of a misty, airy, or subtle material. Anthropologists speculate that this may also stem from early beliefs that ghosts were the person within the person, most noticeable in ancient cultures as a person’s breath, which upon exhaling in colder climates appears visibly as a white mist. This belief may have also fostered the metaphorical meaning of “breath” in certain languages, such as the Latin spiritus and the Greek pneuma, which by analogy became extended to mean the soul. In the Bible, God is depicted as animating Adam with a breath. Numerous theories have been proposed by scientists to provide normal explanations for ghost sightings. Although the evidence for ghosts is largely anecdotal, the belief in ghosts throughout history has remained widespread and persistent.

A ghost hunter taking an EMF reading(Electro Magnetic Field), which proponents claim may be connected to paranormal activity. The EMF detector measures electromagnetic fields and is one of the first tools we use in a paranormal investigation. It is based on the theory that spirits are composed of a type of energy that, when present, can manipulate the Earth’s electromagnetic field. The EMF detector can also measure free-floating EMF waves that are passing through a location. “Free-floating” describes energy that is no longer connected to an energy source, but is still present in the atmosphere. For instance, electrical outlets, which leak power into their surroundings, can discharge an energy burst that can be picked up by an EMF detector.

This photograph of the Combermere Abbey library was taken in 1891

This portrait of “The Brown Lady” ghost is arguably the most famous and well-regarded ghost photograph ever taken. This famous photo was taken in September, 1936
Nightmare on Elm Street
No, there isn’t a real life Freddy Krueger, although hipsters have certainly commandeered his look (minus the glove and burnt face). However, Wes Craven did admit that he was inspired partly by an article he read in the L.A. times detailing how a group of Cambodian immigrants all died while having nightmares. The gory details are investigated in Real Fear: The Truth Behind More Movies:

Conjuring
It’s fairly new as of this writing, but this paranormal-investigators-take-on-a-very-haunted-house is indeed based on a true story. Aforementioned investigators, Ed and Lorraine Warren (played by Patrick Wilson and Vera Farmiga) were very much real (she’s still alive) and did help a family with their haunted farmhouse. The Warrens also investigated the home that inspired The Amityville Horror.

This is the true pic of CHitwan devghat also known as Aryaghat. The skull of a human being was found here on 2009 12th july by police. According to the locals it is said that near the river some 4-5 old women comes and starts to dance by lightning fire in their body. It was hard to believe it, but was true.

This is a place Situated in Dhapasi, Basundhara.
This is a tank used to store water.But No one goes there at night time, because it is said that some spirit of man roams around the water tank at night.

According to local people, a man was killed there brutally. He was first robbed and then later was thrown inside the water tank and locked it from outside.

Ghost Facts
It is often hard to separate fact from fiction, especially when it comes to the supernatural. Who knows the real ghost facts from the false, and those who truly believe are often fed a lot of lies or half truths. The truth is, no one really knows for sure. These ghost facts are collected from the professionals, those who hunt ghosts or have experienced them, creating one of the most comprehensive pages with facts about ghost you can find online. Types of Ghosts

Before delving into specifics, understanding the kinds of hunting’s a person can experience is important. Many experts believe these are the kinds of spirits a person is likely to encounter. Human Spirit – A ghost that was once a human and has died, remaining here for some reason. Commonly cited reasons include guilt, unfinished business, denial of death, or an inability to move on. Past Recreation – Some events leave ripples, and a person may experience a playback of certain events. This is known as a residual haunting. They often include the same activities, noises, and other sensory perceptions repeated over and over again during a period of time.

No spirit is involved with this. Animal Spirits – This is debated by some, but accepted by enough to be included. Pets, animals, even wild creatures and remain here after death, acting in similar fashions to a human ghost. Non-Human Spirits – Yes, these are demons and malevolent beings. A person will rarely encounter them, and a negative, mean, or aggressive human spirit can often be misinterpreted as a demon. This classification is controversial to many, but a number of researchers believe in their existence. Now that the types of ghosts are established, let’s get into the ghost facts. Facts About Ghosts

We don’t know a lot about ghosts. In fact, a number of the ghost facts you can find online discuss how a ghost is feeling, why they do what they do, and what they enjoy. No one knows this for sure. Here are some facts we do know for sure. Ghosts can interact with their environment, moving objects, manifesting in areas, making sounds, or even speaking and conversing at low decibel levels. Spirits can also appear on film and video. Their manifestations can be recorded via either film or digital imagery techniques, but clear photos and videos are hard to capture. People will rarely see ghosts outside of pictures and video. All they generally want is attention, and ghosts rarely cause harm to a person. Recorded attacks against a living human do exist, but most ghosts interact with the surrounding environment to get out attention and avoid violent actions.

A ghost tends to change the temperature of a room, making it colder, and rarely, hotter, than it was. This is used by ghost hunters to identify when a ghost has entered a room. It is not known whether this is a natural reaction to their presence, or if they just want to feel more comfortable. Ghosts can be tracked using and EMF meter, a detector used to measure electric fields. Want to speak with a ghost. Ask questions using a digital recorder. They often answer at low decibel levels, which you can hear during a playback at higher volumes. These are known as EPVs. People of any age can become a ghost. Ghosts have been known to be any age, including children and even babies! Poltergeists are spirits, or potential non-human entities, that enjoy moving objects and playing pranks. They may even tamper with lights or accidentally (possibly intentionally) cause harm to people. Reports of ghost and demons exist throughout history, even if you exclude biblical times and historical and religious reference materials like the Bible.

One of the most famous records is from Athens in the first century A.D. Pliny told people his home was haunted by an old man with a white beard who went around rattling chains. There are thousand of haunted places found throughout the world. You can view a nice index of them right here, and a list of famous hauntings right here. A number of ghost pictures and video are faked using computer manipulation or photography techniques. These fakes are not always obvious, and have fooled a number of people. While there is no definitive scientific proof that ghosts exist, there is also little to disprove their existence. Science has only been able to remove proof from the debate. Hopefully these ghost facts are more informative than the old list still circulating the web, which you can view here. Below are some videos that show these ghost facts are true. Many contain a number of videos or images giving some support to the above facts.

Near Death Experiences
By some reports, nearly 13 million people claim to have had a Near Death Experience (NDE) at least once in their lifetimes. The most telling thing about NDE’s is that they’re so similar– the person feels drawn out of their body, often are greeted by a loved one, sometimes see a light or tunnel with a light at the end. These similarities across cultures and time periods indicate that there is more to these experiences than just hallucination. 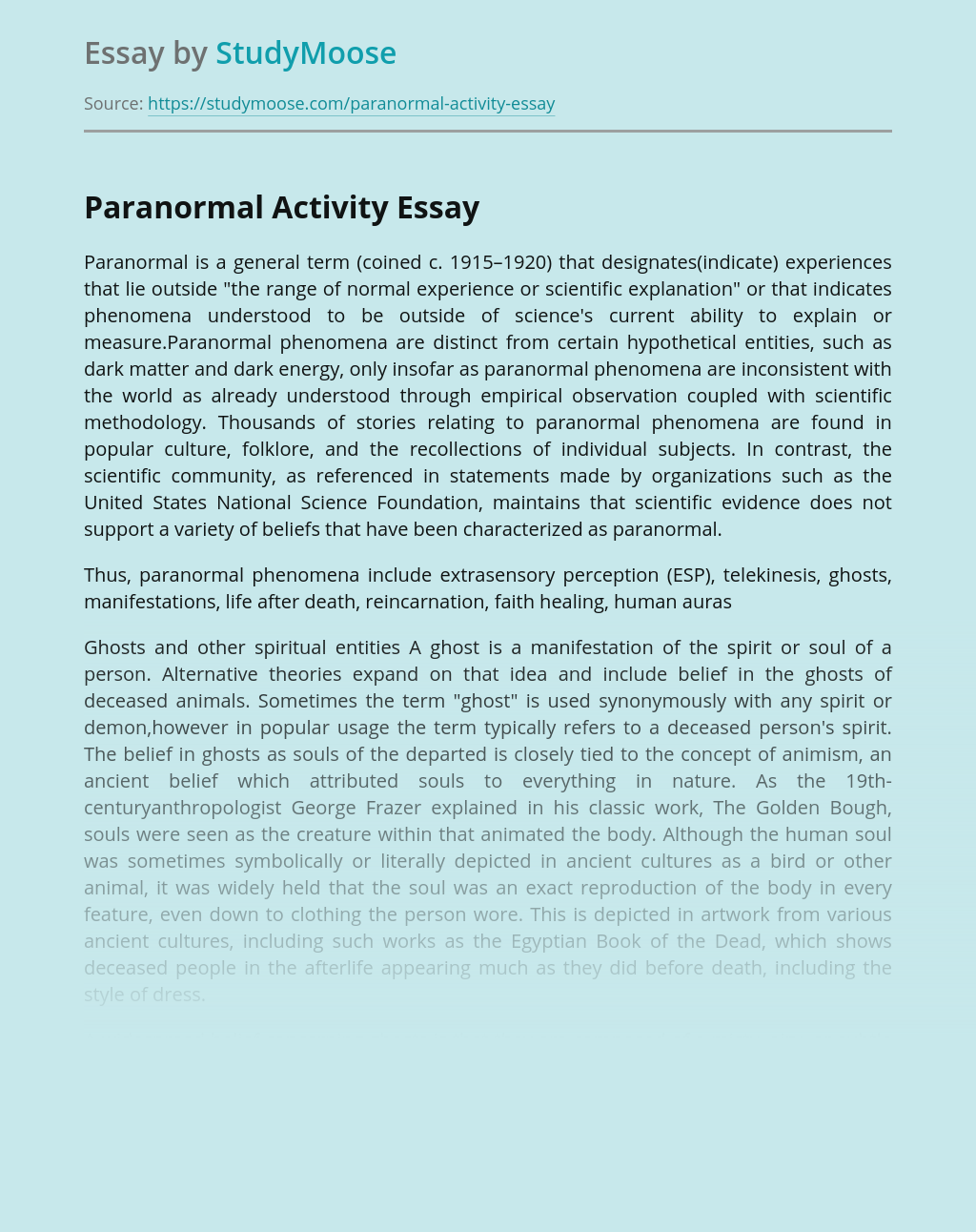 Turn in your highest-quality paper
Get a qualified writer to help you with
“ Paranormal Activity ”
Get high-quality paper
Helping students since 2015
Stay Safe, Stay Original