Whilst on shift one day I needed to ask my key resident Mr H what clothes he wanted to wear for that day. Mr H is very hard of hearing but refuses to wear a hearing aid as he states they make his ears sore. Mr H has no speech difficulties.

Before I proceed with Mr H’s care I check his care plan where it is documented how he likes to be communicated with. Any changes to Mr H’s communication ability should be reported and documented straight onto a daily diary sheet and into his careplan where other staff members are able to see the changes noted.

Don't use plagiarized sources.
Get Your Custom Essay on Reflective Account – Communication Just from $13,9/Page

I then knock loudly on Mr H’s door so that he is aware of my prescence and await his reply, he called for me to ‘come in’. On entering the room I proceed to where Mr H is sitting on the side of his bed. I kneel close to him and make eye contact, I begin speaking to him slightly louder than I normally would talk, slowly and clearly ensuring I don’t imput too much information into my sentences that will make it difficult for Mr H to follow.

I begin by saying ‘Good Morning’ to which Mr H replies the same clearly confirming he had heard me. I then ask him if he slept well to which he replied he had again confirming he had heard me. I then asked Mr H if he is ready to get washed and dressed, he didnt appear to hear me with no verbal response he tilted his head to the side and tapped his ear. This indicated to me that he had not heard what I had said. I gently put my hand on his to give him some reassurance and proceeded to repeat the question a little slower. Mr H nodded and smiled and verbally answered ‘yes’.

Next I asked Mr H what clothing he would like to wear that day, to assist me in doing this I indicated to Mr H with my hands pointing to my eyes to watch what I was doing. I went over to his wardrobe and opened it and took out a selection of shirts and held them up for Mr H to see. he chose which he would like to wear by pointing at the shirt and verbally confirming the colour he had chosen, I repeated this process with both his trousers and sweatshirt.

Mr H appeared happy with the way I was communicating with him as he smiled and nodded at me. I could tell if Mr H had understood or heard me correctly by his verbal responses and his facial expressions.

Whilst communicating with Mr H I reviewed his hearing ability by making a mental note of the times he hadn’t heard me correctly and compared this with the previous day, at present Mr H’s hearing ability doesn’t appear to have changed, I recorded this in the communication section of Mr H’s care plan where others could see there were no changes at present.

A short while later the nurse visited Mr H, to help support Mr H I privately, to ensure no breech of cofidentiality was broken, explained to the nurse the difficulties Mr H had with his hearing and explained to her the ways in which I communicate with Mr H in accordance to Mr H’s preferences documented in his care plan. They both appreciated this as there were no misunderstandings and they both fely more at ease with eachother. I then indicated to Mr H that I would leave them in private by pointing to the door and waving, Mr H nodded his understanding and waved back. 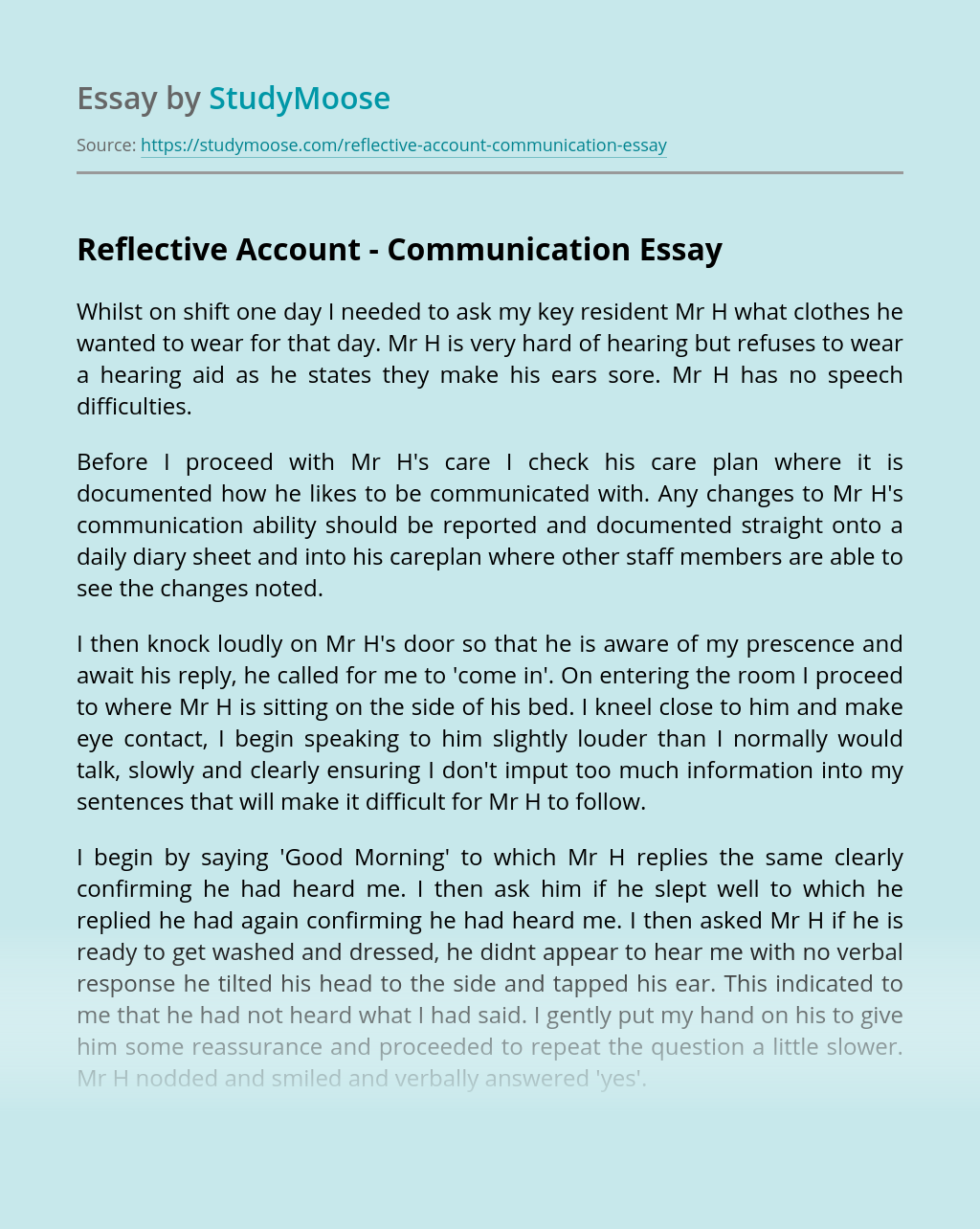 The Negative Impact of Technology on Interpersonal Relationships

As a manager of Van Rensselaer Manor Nursing Home Rehabilitation Center, we now are going to propose a new addition of long-term care services along with still having services for short-term on an inpatient and outpatient basis. The future of our organization’s growth internally and externally will demand how well we communication our abilities not...

a.Mass communication enables you to communicate information to large numbers of people in a relatively short time. .Identify the principles of interpersonal transactional communication a.First principle – You cannot NOT communicate. i.Each day we receive thousands of behavioral cues to communicate. We choose which are worthy of our attention. We interpret or attribute meaning to...

View sample
?The effects of Information and Communication Technologies

In the last few years India has made rapid strides as a developing nation. Education has played a key role in that. Educational institutions, which lay down the foundation for learning and understanding, have reached out to the corners of the country. The purpose of this paper aims to bring together the findings and key...