I found that making this academic presentation to be a very challenging experience. This was mainly down to working with a group of people that I don’t know, another factor that may have contributed is that I had to study an area of London that I’m not familiar with. Despite how challenging I thought the experience was I also found that working on, and presenting the presentation to be a rewarding experience, this was because I was able use theories I had learned and apply them to a specific area.

Don't use plagiarized sources. Get your custom essay on
“ Reflection Paper on Criminology Group Presentation ”
Get custom paper
NEW! smart matching with writer

The groups we were in were allocated at random, this was done by giving each person a number between one and four, the number you were given is the group that you are in, this led there to mixed groups with mixed levels of ability. I found the process to be quite bothersome as I was split from the friends I had formed in the seminar group, the group I was put into consisted of four people.

After being allocated into are groups were told that for the presentation we could choose any post code to research as long as it was in London. After this we were then told that we had to gather information about that specific area and that we had to use different theory’s to explain the information we had gathered. At the end of the seminar the group I was in all exchanged contact details so we could talk over the up coming independent learn week.

Over the independent study week we decided as a group which area we want to study which was Harlesden. The task I was given was to pick a crime of my choice and gather statistics on the crime using the Metropolitan Police statistics website, later on I would use the theories that we had been taught in our lectures and seminars to explain the crime I had picked. Another part of my task was to find statistics and information about the housing in Harlesden and try and compare them with the crime statistics I had gathered.

It took a bit of time but I did finally decided on the crime I was going to pick and the crime was robbery. After I decided I then looked on the internet for information and statistics for robbery, the main website I used was the Metropolitan Police statistics website as it was reliable and we were shown how to navigate the website in the seminar. Finding reliable robbery statistics was quite straight forward to do as the statistics on the website were up to date and were fairly easy to understand. This was quite the opposite to the information on housing on the MET Police statistics website, the most difficult part, for me at least, was trying to decide what information was relevant and useful and separating it from the useless irrelevant information. Another factor that hindered me was that the majority of the information was outdated which made it unreliable. This problem was not just isolated to me as other members of my group also faced being confronted with too much information and having to deal with outdated statistics. It was useful that the group I was in would meet up twice every week outside of the seminars to discuss the progress that we had each made, it also meant that we could discuss any issues that we were having and voice any concerns that we had about the presentations.

One problem with this was that one member of the group almost always never showed up to the meetings which isn’t useful for the group or the individual. During one of the first meetings we had I told my group about the problems I was facing trying to find reliable information on housing, the group helped me decided that I should just gather the statistics for robbery in Harlesden. After I have done this they told me I can then use these statistics and compare it with the previous year, the thinking behind this was that by comparing the robbery rates of this years and the previous year we can show whether or not the actions being taken by the police or preventions the police have put in place to decrease robbery in Harlesden are truly working, they also suggested that I should compare Harlesdens robbery rate against the MET total as this would show how Harlesden compares with robbery rates in terms of the whole of London.

In my presentation I used three theories to explain robbery, the three I chose to use were the classicist approach of rational decision, zones of transition theory and also the relative deprivation theory. All three of these theories had been taught in the lecture, nevertheless I found that by doing my own personal reading and internet research it helped me fully understand these theories and then be able to apply them to the statistical data and explain robbery. The readings and internet research that I did meant that I was able to write a great statement on why robbery in Harlesden is committed, whilst also knowing the theories to a degree that I would be able to explain them during my presentation.

Before I began to look at Harlesden I little idea where it was, and had almost no information about the area. This meant that I got my first impression of Harlesden from the MET police crime statistics, this in turn gave me the feeling that maybe Harlesden was a area that was maybe rife with crime. This changed however after having done more investigating in to area and having spoken to the two people in my group that live there, my impressions have now changed and I now view Harlesden like most other place, there are some better areas and there are some worse areas. This shows how working in a group can be beneficial as they helped me see that I shouldn’t judge a place on just statistics and that you need to speak to people that live in the area to fully understand the area. If I had been in a group with people that didn’t live in Harlesden I believe that my first impression of the area would still be the impression that would have today, yet having people in my group who had experienced Harlesden first hand and could talk about the experiences they have had helped assist in changing my first impression.

I felt this presentation helped me because I was able to improve on my weakness which I had which was my presentation skills and this allowed me to improve this in a later presentation I did for another module. So reflecting on my experience of this presentation allowed me to improve ‘the capacity to reflect on action so as to engage in a process of continuous learning’ (Schön, 1983:173). This experience also showed that I was able to complete my research and gather information and deliver it in a presentation which was a new thing for me. At first I didn’t feel confidence that I would be able to deliver a good piece of work, but by working with others it has shown me that if you all work together on a piece of work it doesn’t seem as daunting and it will make the experience more rewarding. 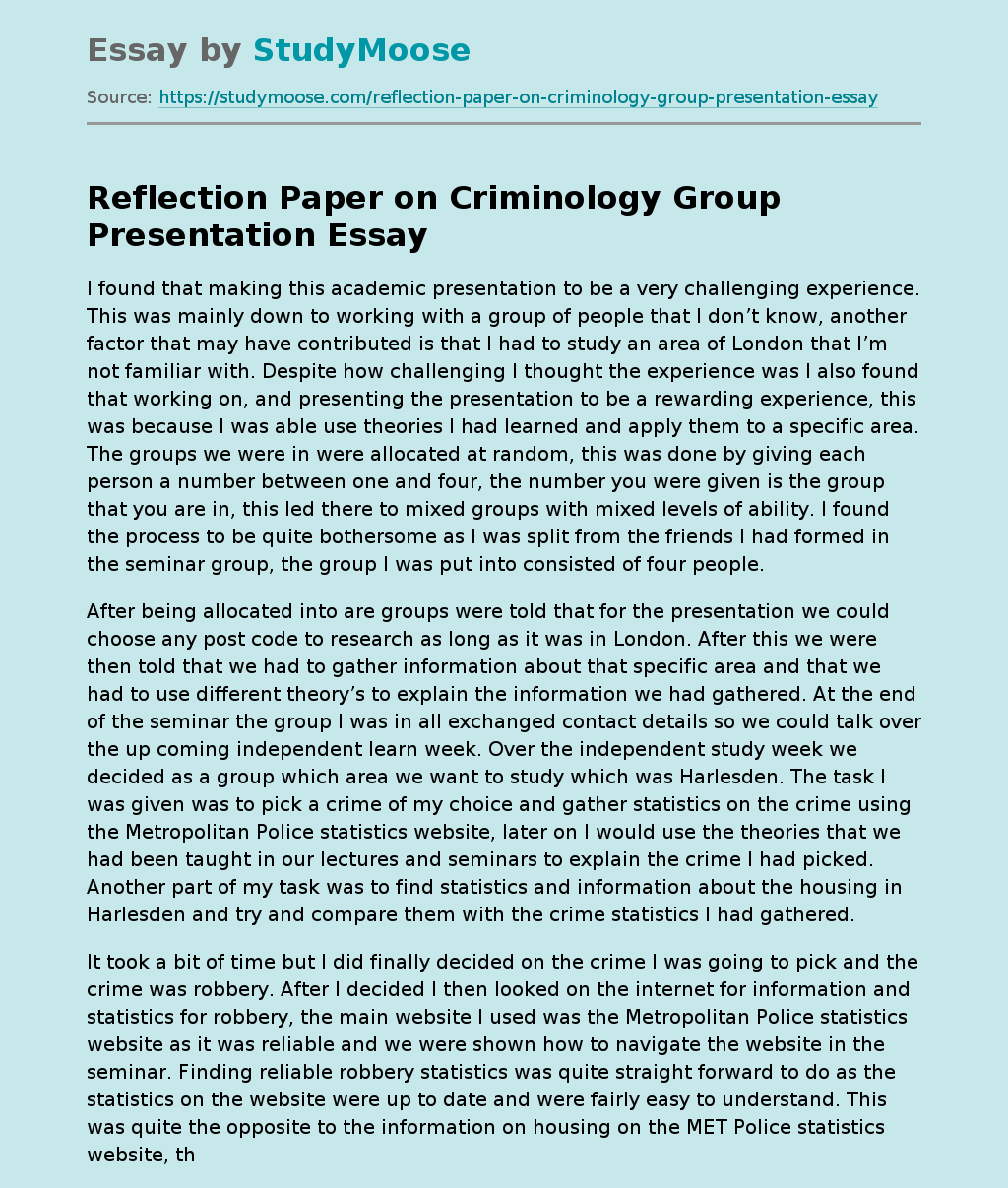