Applying Criminological theory to Knife Crime in the United Kingdom

0#Knife crime is a big issue in the UK: many people have lost their lives in knife stabbing with some survivor who have been left disabled or with big scars on their body. Last year 900 serious crimes were recorded in Merseyside. Looking at the statistics of knife crime in the United Kingdom compared to other crimes is stressful. In 2011 33,000 knife crimes were recorded; this number went up to 40.000 in 2018, year ending in March each.

The Home Office records in 2017 that knife and sharp instrument are used in 30% of Homicide; around 20% of perpetrators of knife crimes are aged between 10 and 17 and 70% are over 18years old. When they analyzed crime by Region for the year ending in March 2017, they found out that London took the lead with140 knife offenses over a population of 100,000 followed by the West Midlands 65, the Yorkshire and Humber 55and the Northwest in the fourth position with 50 knife crimes over 100.

000 population. Despite the high number of death in knife attack, the Home office source ‘on what kind of crimes are knives use for’ showed that 47% of them are Assault, 43% for robbery, 17% for treat to kill, 2% attempt to kill and another2% for rape and or sexual assault. ( I am going to look at the left and right realism thoughts about crime and delinquency , the anomie and strain theory on the causes of crime and the contribution of Capitalism to deviance.

#Criminologists have tried to look at the problem of knife crime and have expressed different views in the effort to assist in finding solutions.

3#Knife crime has become widespread with alarming statistics. Prince Charles and his son Henry stood up to work together with Stars such as Tom Hardy, campaigning for the stop of knife crimes saying ‘enough is enough’. Prince Charles in his talk explained better ways of supporting young people in their adolescence transition would be to orient their ambition and energy into constructive activities such as sports giving the example of boxing. From Prince Charles view young people at such age need to be managed, and given many opportunities and routes so they can choose what they want to be in their life. He stressed that they become a danger to society if there are left on their own, hanging on the street. It would be then the opportunity to learn all bad behaviour on joining groups of gangs, starts to find ways to get money or all they want by selling drugs, carry knives for multiples purposes such as stabbing people to steal they belong or just killing people for any other reasons. ( In the same direction Lea and young 1993 were concerned in the modern Capitalist society of the growing marginalisation of poor young people, giving examples of unemployed youth from deprived poor Areas, stealing cars in different British cities. This is a typical sign of poverty and lack of opportunity as they are locked away of the labour market. Therefore Capitalism is see as a “system of destructive self-reproduction that changes the functionality of crime not only for the socially excluded at the bottom of the society but also for capital itself, which is now busily destroying cities and communities, welfare and public goods, laying waste to a large areas of the globe, undermining the basis of social cohesion as part of the normal ‘legitimate’ process of economic development”. Therefore criminal activities are a reaction to such organised crime of the capitalist Elite, looking changes and innovation (Lea; J. 2002 page 143).

Figure 2: Above is the knife Angel standing by the Anglican Cathedral in Liverpool in the effort to stop knife crime in Liverpool

Figure3: Alfie Bradley the artist standing in front of his artwork with a “save a life, surrender your knife” message on his t-shirt.

In the effort to tackle knife crime in Liverpool some people such The Royal Liverpool and Broadgreen hospitals staff who have been treating knives crime victims in their Accident and Emergency department, worked very hard to bring the knife Angel in Liverpool. It arrived on the 29 November 2018 and would stand tall by the Liverpool Anglican Cathedral from that date to 31 January 2019 to give plenty of time to Liverpool people to see and more importantly understand the message it is transmitting. The knife Angel was made by iron workers in Oswestry Shropshire. Alfie Bradley the artist-designer of the knife Angel at the Iron Work Centre was in the first instance refused the permission to design the scripture as the government thought it would give a bad image to the country. He was finally allowed to do it. He used in total around 100,000knives gathered from 41 police forces from different places in the United Kingdom. It took him 2years to make the 27 ft knives Angel. This is an incredible artwork, it is more than words and can be moved from one city to another to teach communities how bad knife crime is for the victim the perpetrator and the whole society in general (

In conclusion knife crime is directory connected to delinquency and gang subculture.

R Merton(1938) referring to Marx and Durkheim ideas on causes of deviance, developed the ” social structure and Anomie theory” arguing that crime and deviance emerge as an individual adaptation to pressures born from the Capitalist social structure, He accused Capitalism of putting a big pressure on the society thus the strain and tensions resulting from it caused crime. That situation favoured the norms and values breakdown what he called ‘Anomie’. (Carrabine; E. Cox; P. Lee; M. Plummer; K. South; N. 2009 page 79).

To sum up knife crime is a huge problem that is very difficult to control: as Cohen (1985; 2001) control crime is more likely to harm individuals’ liberty than it can reduce crime. For example the level of control and security on street in the shops with the scanning of shoppers, the individuals stop and search, the government allowing some people’s post to be read and telephone tapped the airports checks, all the cameras in the country have just reduce crime but could not eliminate it completely. I addition to this crime control has instead helped the Criminals to develops strategies not to be caught such as hiding their weapons, act in groups and create connections in different cities. As stated by some criminologist Capitalism has contributed to rise in crime, it is seen as a system of destructive

Looking at the Home Office statistics, most knife crimes perpetrators are young people of working age. This might support the Left Realism blaming and accusations to the government of not providing young people social-economic opportunity to improve their lives. They are left frustrated hanging on streets. The only option left to them would be joining gang subculture, using knives or other weapon to kill and taking part in, robbing, riots or drugs taking and selling to survive. In addition to this the Criminal justice would concentrate on the crime committed by the poor young people. They ignore the white collar crime such as the Capitalism Elite crime who’s the law protects and cover up their crimes (Lea; J.2002). The symbolic interactionist view crime as a matter of definition rather than an inherent property of any particular act or a person. Crime is a relative rather than an absolute phenomenon.it is more constructed or interpreted reality than existing reality( Hester; S. Eglin; P . 1992. Page93-97)

. Right realism was criticized for ignoring white collar crimes and not looking at stratification and poverty as causes, also forgot the role of justice and law enforcement. They were accused of not being able to find the cause of crime giving an example of the high rate of reoffending dues to right realism weak approach to offenders. ( 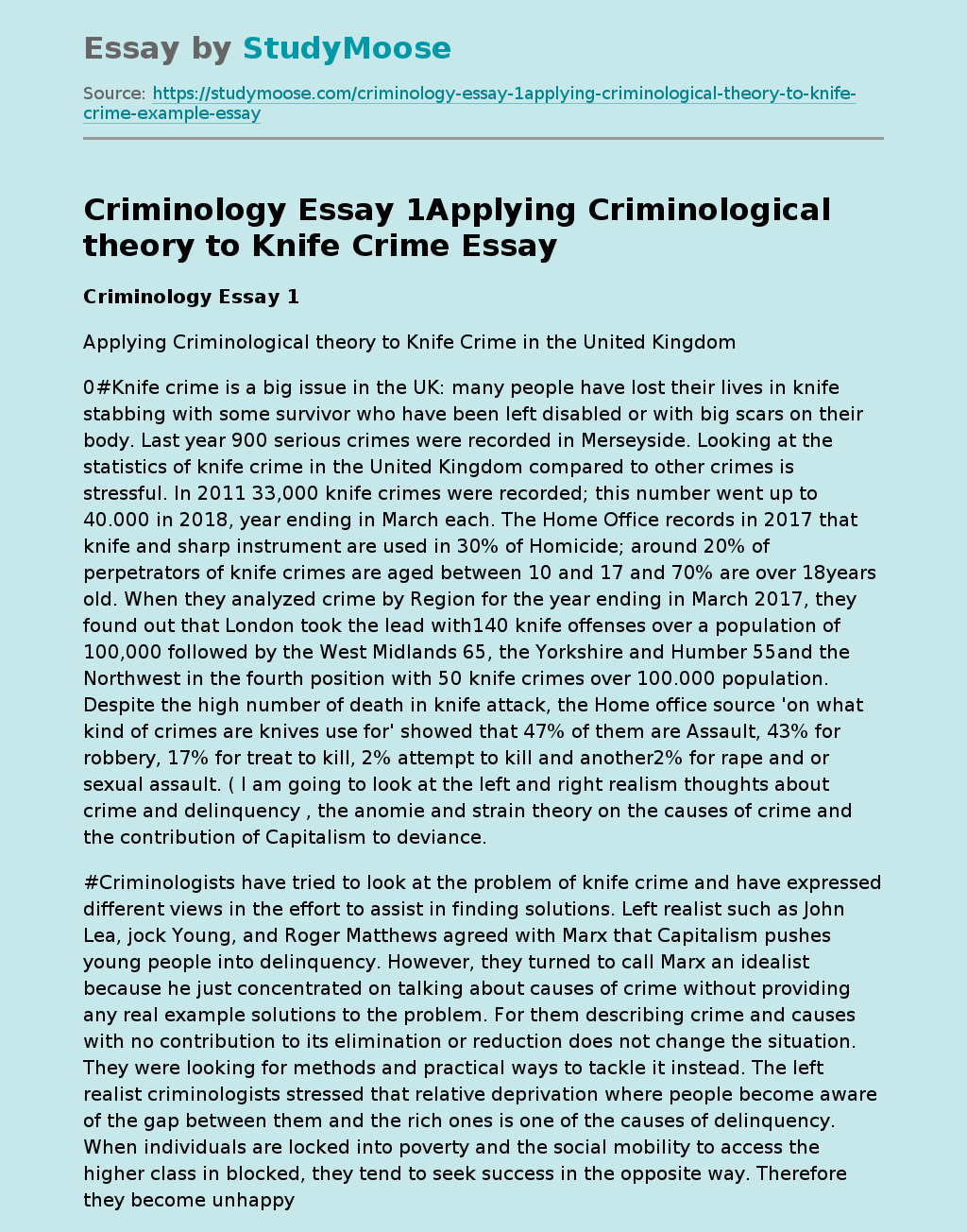