Various variables in one’s life can contribute to deviant behaviors, which is analyzed and explained through theory. These variables are but not limited to where one grows up, what type of people you surround yourself with, age, gender, etc. The scenario that this essay will prominently prefer to and use extensively throughout this essay is about a male named Colin in his teens. When growing up, he live on the “bad side” of town as opposed to most of his friends who lived on the “right side” of town, and who were a lot more privileged.

Don't use plagiarized sources. Get your custom essay on
“ Criminological Perspectives ”
Get custom paper
NEW! smart matching with writer

Colin was from a small town that had many altercations relating to the youth of that community. There was nothing productive for Colin to do in the small town, which caused excessive boredom for him. Colin had been arrested at the age of 15 for stealing gas from a neighbor’s truck, charges were not laid, but the entire community knows of his transgression. Also, Colin took the brunt of the responsibility for a theft in which he was not acting alone.

Finally, at the age of 17, Colin left the small town behind and was accepted into a trade college. Colin’s age, where he lives, and his criminal involvement at a young age will be the focus for the rest of the essay. In turn, this paper is going to analyzing a youth from a small town, where there is proven higher rates of crime, and explaining it using two theoretical theories.

Thus, by examining the two most highly recognized theories in depth, the Low Self Control Theory and Aker’s Social Learning Theory, and analyzing their strengths and weaknesses, we can then begin to understand why certain crimes occur, particularly in Colin’s scenario.

They focused on the proposition that self-control, adopted early in life, determines who will be likely to commit crimes (Grasmick et al, 1993). According to Low Self Control Theory, children with behavioral problems tend to grow into delinquents and eventually into adult offenders (Gottfredson & Hirschi, 1990). Gottfredson and Hirschi further argue that the level of self-control largely depends on the quality of parenting in a child’s early years, as the path for or against crime happens early in life (Gottfredson & Hirschi, 1990).

Although lack of self-control and the family’s role in its failed development do not mean that an individual will become deviant and take part in criminal events, it will provide situations that will make conditions favorable for delinquency (Gottfredson & Hirschi, 1990). Gottfredson and Hirschi unmistakably identify the role of parents as the most essential cause of socialization for adolescent youths (Gottfredson & Hirschi, 1990). Hirsch has provided the dynamics of the family’s important role in reducing the chances of childhood delinquency (Hirschi, 1995). As the Low Self Control Theory states, individuals who are ineffectively parented prior to age 10 develop less self-control than their similarly aged and better-parented counterparts. This makes them prone to quick and easy gratification when given the opportunity (Gottfredson & Hirschi 1990).

Opportunity of crime is apparent for individuals living in a small town, which is prone to crime. Partaking in different types of crimes, such as Colin does, tend to be exciting, risky, or thrilling and they maintain an adventurous point of view. This is especially the case, since Colin is bored in a small town where no action is available to him. As most of the theory is focused on good parenting, and lack of opportunity, small communities will have a tough time deterring criminals in taking part in crime. However, having more police presence will deter individuals from committing crimes throughout the community, as the criminals will partake in crime as long as the opportunity presents itself. On the contrary, if the individuals are neglected as children or have been in an abusive household it will be extremely difficult to deter individuals to commit crimes.

Colin has no friends to play with because he does not reside on the wealthy side of town which could bring about neglect, and/or his parents could be abusive or absent in his childhood years. Aker’s Social Learning Theory consists of four key elements. Firstly, imitation refers to the degree of which an individual mimics behaviour that others may admire. Whether or not the behaviour is imitated is affected by external characteristics such as the characteristics of the model, the behaviour observed, and the observed consequences (Akers & Jenson, 2003). These individuals are more than likely to be people that have a personal relationship.

Definitions refer to the level of approval individual’s hold regarding morals and laws as well as specific deviant behaviour. These definitions are both general (religious, moral) and specific (Akers & Jenson, 2003). Differential association is the third element of Aker’s social learning model as it refers to attitudes and patterns of behaviours, which are exposed in interaction with others (Paternoster & Bachman, 2001). Differential association has both behavioural interactional and normative dimensions (Paternoster & Bachman, 2001). Finally, differential reinforcement refers to the anticipated costs and rewards associated with an individual’s given behaviour. An act or action that is considered to experience more rewards than costs is more likely to be performed or repeated (Paternoster & Bachman, 2001).

Furthermore, the theory can be applied to any crime that beings any kind of gain. The gain can include positive attention from their group, or pleasure. In most cases an individual will learn behavior from others and then the behavior is reinforced. Taking into consideration when Colin’s participated in the theft with peers and took all of the blame for it once he was caught. As most of his friends are from the “right side” of town, and he is not, he may have felt pressure from the upper class to take blame. Also, if crime is being committed in a small town and individuals are witnessing it, it can give other criminals the opportunity to join in as the police work loads double, the chances of getting caught for committing a crime decreases.

As per Social Learning Theory, Aker’s states that if the risk is the worth the reward than an individual will proceed in committing crimes. Thus, understanding Aker’s 4 elements of social learning and applying them to Colin’s scenario will give individuals a better chance of successfully avoiding crime. However, the only effective way to do so is to deter criminals by adding the use of security cameras, added police forces, and making examples out of those individuals who are caught. Which is not what happened when Colin was caught for stealing gas out of his neighbors truck. If he were to be made an example out of, the likelihood of it happening again would be low.

Out of the two approaches that are being examined, I believe for the example for Colin’s scenario that the Low Self Control Theory is more convincing in explaining the opportunities of committing crime. Although Low Self Control Theory can be applied to the situation, Aker’s Social Learning Theory gives a better understanding of when and why individuals would commit crimes in small towns, such as where Colin is from. As the individuals involved do not necessarily have to have a criminal past, through imitation of their peers and the other elements of social learning, can resort to committing crimes. Other factors that can be included are alcohol, drugs, and peer pressure but as long as the behavior is positively enforced, the individuals will take part in it.

Aker’s Social Learning Theory provides a micro perspective on why individual offenders decide to commit specific crimes; people choose to engage in crime because it can be rewarding, easy, satisfying, fun, and in this case, entertaining. Most of the individuals that would be taking place in these crimes would be heavily influenced be external factors and may just fall under the gang mentality. Although both theories have been studied throughout the history of criminology and continue to be expanded, there are many strengths and weaknesses that can be examined. The Low Self Control Theory has received many criticisms as Gottfredson and Hirschi argue that there is only one type of offender and only a single factor, which causes crime.

Many researchers found that there are various paths that criminals can take (Goode, 2008). People behave criminally at a different speed than others, commit different types of crimes, and have different external influences that contribute to the behavior (Goode, 2008). Moreover, Low Self Control Theory argues that criminal tendency is unable to change. Therefore, according to this theory, an individual’s personality and behavioral patterns will also never change over the course of a lifetime. However, research shows that life altering events and traditional events such as starting or finishing school, abusing drugs, recovering from drugs, and beginning or ending personal relationships, all clearly impact the probability of behaving criminally (Goode, 2008). This applies to Colin’s scenario, as he may change his criminal ways once being committed to school.

On the contrary, Gottfredson and Hirschi were quite popular in the views of American criminologists in the early 1990s. As they identified parenting as the most decisive factor in determining the likelihood that a person will commit crimes, child rearing became an important factor for parents. Despite much criticism, the body of empirical tests of the general theory of crime has been fairly consistent in revealing a link between self-control and crime.

Studies have shown that individuals with higher self-control are less likely to engage in criminal activity (Goode, 2008). In the context of Colin’s scenario, the weaknesses that can be exploited is that individuals that are not necessarily criminals may take part in criminal activity due to a number of external factors that have been presented in this paper. These individuals may have had a great upbringing from their parents, but failed to make a positive decision, such as out of boredom.

Aker’s Social Learning Theory has also received criticisms over the years although it is not nearly as much as Gottfredson and Hirschi. According to many criminologists, Social Learning Theory does not provide applicable advice for controlling or preventing crime (Jeffery, 1990). It does explain how criminal behavior is ‘transmitted’ from one person to another, which can explain increases in types of crimes. The theory does not address the issue of how crime can be prevented (Jeffery, 1990). Moreover, Akers’ work is that it ignores the role of opportunity in criminal behavior (Jeffery, 1990).

Therefore, I do not believe it is possible to integrate both theories while keeping the main concepts together. To conclude, Low Self Control Theory and Social Learning Theory both provide exceptional analysis of Colin’s scenario. By understanding the key concepts of the Low Self Control Theory and Social Learning Theory, the explanation of where and why crime occurs would give reassurance to individuals of Colin’s town. By comparing and contrasting these two theories, an individual can apply them to how growing up in a small town might affect them and potentially provide methods and opportunities to deflect crime. 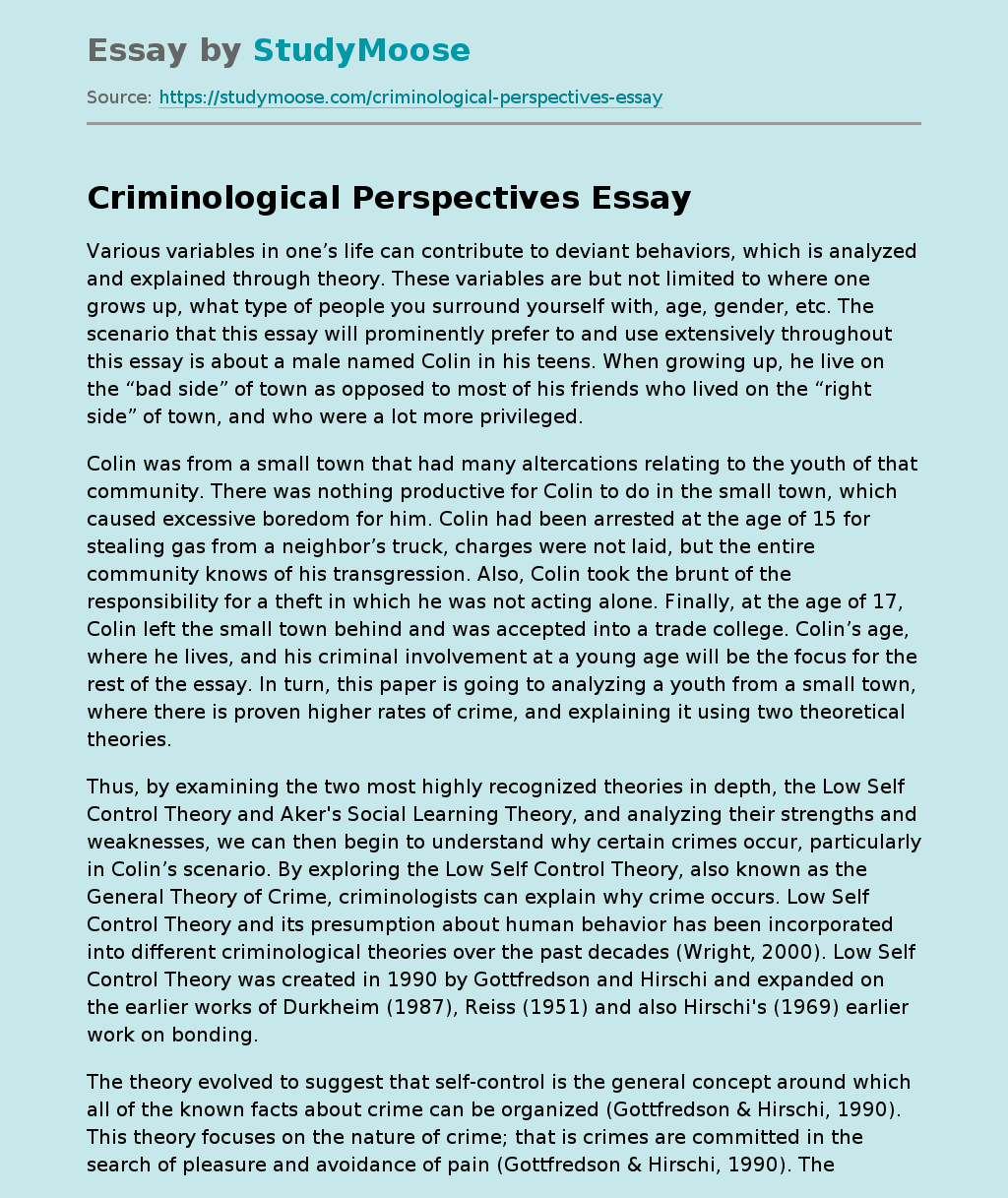