Recrystallization is a technique used to purify organic solids. This method involves dissolving of a solute in a solvent and inciting the solute to produce a precipitate from a solution. In this experiment, acetic anhydride was added to the mixture of 2mL aniline and 20mL of distilled water. The mixture was cooled in an ice bath and filtered through filter paper resulting to the crude acetanilide. The pure acetanilide was then produced by the filtered solution of crude acetanilide and recrystallizing solvent.

Don't use plagiarized sources. Get your custom essay on
“ Recrystallization of Acetanilide Using Water as Solvent ”
Get custom paper
NEW! smart matching with writer

This is the process behind the formation of crystals. Recrystallization can be broken down into several steps. A suitable solvent is chosen followed by the compound being dissolved in a minimum solvent. Insoluble impurities are removed and crystallization follows upon cooling. The crystals are collected and dried.

Acetanilide can be obtained by acetylation of aniline undergone by nitration at low temperature. For acetylation of anilines, acetic anhydride is commonly used. Also called acetic acid anilide, acetanilide is an odorless, white crystalline powder which is soluble in hot water, alcohol, ether, chloroform, acetone, glycerol and benzene. It has a melting point of 114 °C and boiling point of 314°C. It is a combustible solid. When digested, it is moderately toxic. Exposure to body tissues would lead to irritation. For the production of rubber accelerators, dyes and camphor, acetanilide is used as an intermediate. It also used in penicillin synthesis and other pharmaceuticals like painkillers and intermediates. It is incompatible with strong alkalis and oxidizers but remains stable under normal conditions. Also, it is an amide.

Table 1 shows the result of the solubility of pure acetanilide in different temperatures provided.

Table 1: Summary of the Solubility of Pure Acetanilide in Different Solvents of Varying Temperatures

Table 2: Summary of the Weight of Crude and Pure Acetanilide

Quantitative Analysis of Acetanilide thru Determination of Percentage Yield The percentage recovery of pure acetanilide was computed using the formula:

Percentage yield is used in cases where chemical transformation occurs. In calculating the percentage yield, the following is needed:

The limiting reagent is Aniline since 2.97g was needed to make 3 milliliters of Acetic Anhydride. 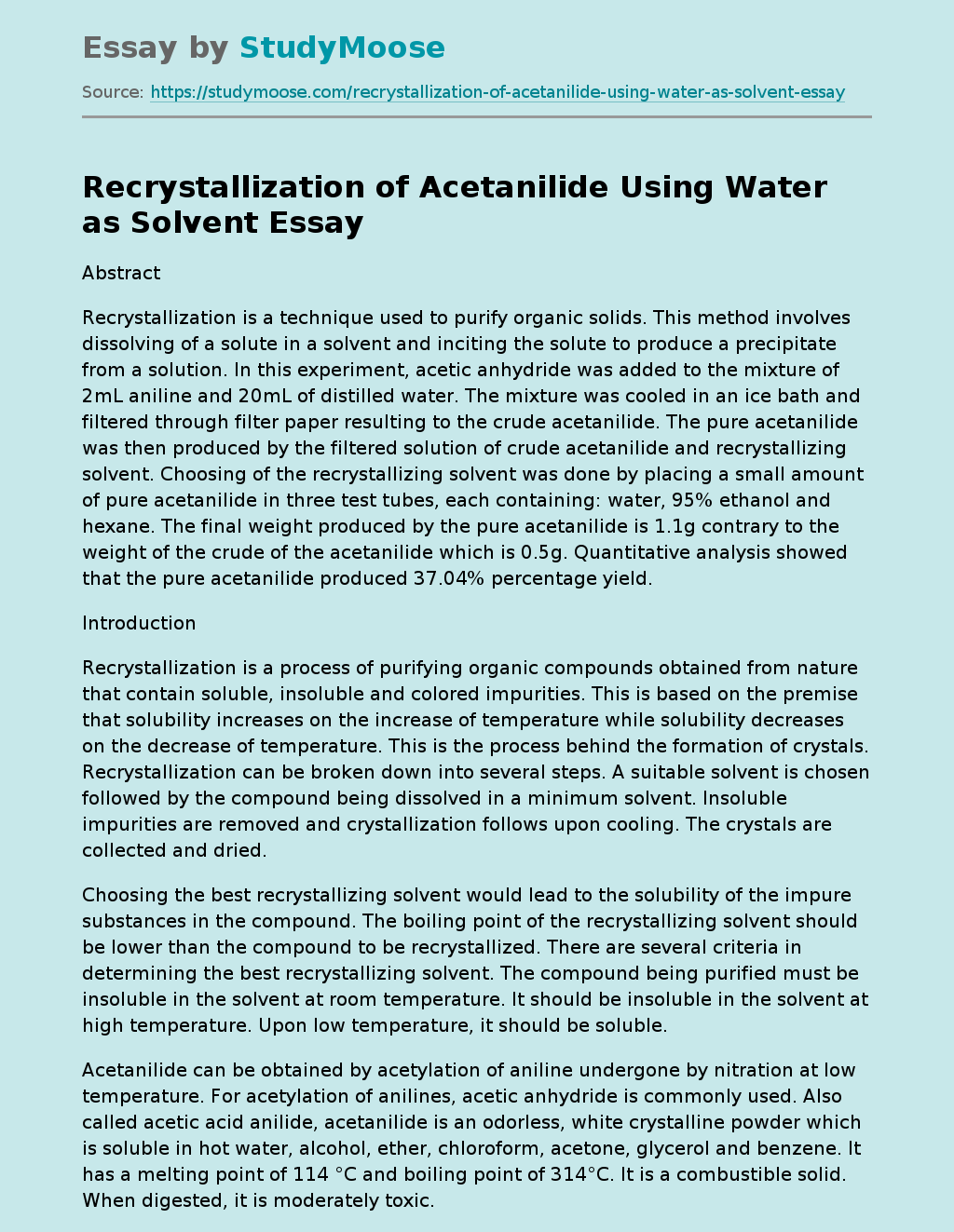