The movie recount is a very good representation of what happened during the 2000 election between George W. Bush and Al Gore. It dives into the legal battle between the two campaigns as the recount of Florida’s votes kept the nation waiting for over a month. Although the movie shows both sides of the story, I believe the Democrats supported the making of this movie. During the movie they made it seem like the Democrats were being treated unfairly but really the government was just following the rules.

Don't use plagiarized sources.
Get Your Custom Essay on Recount Just from $13,9/Page

Today it is still a controversial topic, I believe the government handled it the right way and that if it was to happen again, the same outcome would happen.

At the end of the movie they have two quotes, one by Democrat Warren Christopher, and he said, “The world is watching. We are, after all, its last great democracy….”. The other by Republican, James Baker, and he said, “People are going to say all kinds of things about this election, that it was down to 154 votes, that Bush’s brother was the governor, that the US Supreme Court gave it to us.

But I want you to remember that we won every single recount. Never once did we trail Gore. And who knows how many votes we lost when the networks called Florida for Gore before the polls were closed on election night? But more important than all that is that the system worked. There were no tanks on the streets. This peaceful transfer of power in the emotional and trying of times is a testament to the strength of the Constitution and our faith in the rule of law.” I agree with both of the quotes, but the one that really should make everyone trust the government is the last two sentences of James Baker’s quote. There were no tanks on the streets and no war was started over this.

Both parties respected the Constitution and how it was handled. There was plenty of things that had affect on the process, but five of the most important were, butterfly ballots, hanging chad, the Florida recount law, the Republican control of Florida, and voter discrimination. Butterfly ballots are ballot papers that have names down both sides, with a single column of punch holes in the center, which has been likened to a maze. This butterfly ballot caused confusion to many voters, and quickly after they voted many had called in saying the voted for the wrong person. The reason given for the design was that they felt the people wouldn’t be able to read the font if they put all the candidates on the same side of the ballot. Although the set up may have been confusing it is your job as a voter to pay attention to what you are doing while voting. A hanging chad is the piece of paper left hanging from a punch-card ballot when the punch is incomplete. A bulging chad is still attached to the hole on both sides. During the 2000 election chads were a very big deal. During the recount it was a big decision whether or not to count a vote that didn’t go all the way through even if you could tell where their intended vote was heading. In my opinion they should not count the vote if it did not go all the way through, again it is your job as a voter to make your vote obvious.

The Florida Recount Law states that, the close vote margin for Florida elections is 0.5% of the total votes cast for a given office or measure. The law specifies that candidates, including candidates for retention to a judicial office, and ballot measures are all subject to recounts. Both primary and general elections are eligible for recounts. The apparent losing candidate by this margin can waive the recount if such a request is made in writing to the canvassing board. The 0.5% close vote margin at first initiates a recount of paper ballots. If the recount results in a vote margin that is less than or equal to 0.25%, a hand recount is called for. However, the hand recount is only for those ballots containing under votes or over votes, and is mandated only if the collective total of under votes and over votes is enough to alter the result of the election. As many people know Florida is usually a Republican state. During the 2000 election George W. Bush’s brother, Jeb Bush, was the Governor of Florida during the time and many people believed this helped him win. During the movie it seemed as if the Republicans in charge were trying to end the recount as fast as possible.

Many people may look at this as cheating because the Governor was a Republican, but the truth is they wanted it to end because the Democrats were only asking Democrat sections of Florida to recount and they did not want to lose the Presidency because of a recount. I think that the Republican control of Florida didn’t affect the recount at all and that they handled it the same way a Democrat party would have if roles were reversed. Voter discrimination was and still is a very big deal in Florida. During the 2000 election in Florida wide-ranging errors and unequal resources in the election process denied countless Floridians the right to vote. The majority of these Florida voters fell most harshly on the shoulders of African Americans. The movie showed that if you had the name similar to a felon it would not let you vote as well. This was very wrong and that could have fixed the election. Although it was all very confusing and left many Americans, and the two candidates waiting for over a month, it all goes back to what James Baker said, “There were no tanks on the streets. This peaceful transfer of power in the emotional and trying of times is a testament to the strength of the Constitution and our faith in the rule of law.” 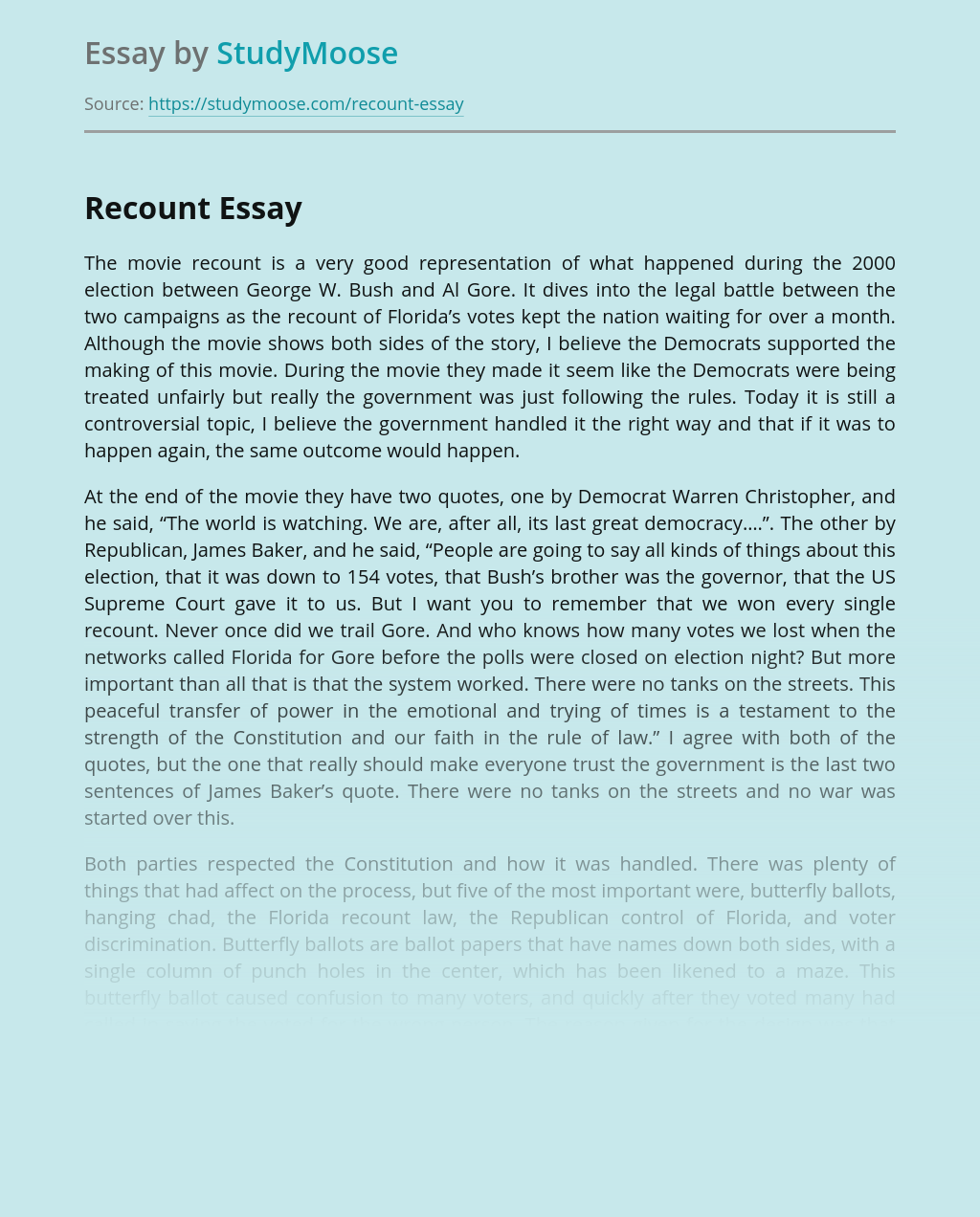 Otherness is the act of one group or individual viewing another as inferior due to the fact that of evident differences, typically to bestow sensations of self-importance on themselves. Otherness can be found in a variety of kinds. The individual or group identified as “other” may be different race, faith, social class, etc . Claude...

QUESTION 1; 1. Do you think elections can be a good measure of democracy? Discuss this statement in relation to elections recently held in African countries you are familiar with. INTRODUCTION The year 2011 experienced serious levels of political activities in Africa such as political upheavals, middle-east uprisings and elections in many countries. Most Islamic...

This political cartoon shows President NoyNoy with the word “political maneuvers” written on his arm pushing two letters, the R and the H with difficulty because of big rocks with the words objection, 2013 polls and moral issues written on each rock. The cartoon also shows how hard it was for Pnoy because of the...

View sample
The "Era of the Common Man"