In January and February 2000, terrible floods hit the whole of South Africa, but Mozambique was one of the worst affected areas, creating many problems that were later to affect Mozambique. These floods caused many problems for Mozambique with infrastructure being seriously damaged and there were great effects on the people, the economy and the society.

The floods that devastated Mozambique were mainly down to a long period of heavy rain. Over 1,100 mm of rain fell in February – this was the equivalent of more than 75% of Mozambique’s annual rainfall falling over the space of just a few days.

Don't use plagiarized sources. Get your custom essay on
“ The Mozambique floods 2000 ”
Get custom paper
NEW! smart matching with writer

The heavy rain then continued to fall for over four weeks and even when rescue operations began, torrential rain continued to pour. Prior to this rainfall, there had been a long dry spell further increasing the chances of a flood due to the surfaces acting like an impermeable surface, increasing the rate of surface run-off into Mozambique’s rivers.

The main rivers affected were the Save River, the Limpopo River and the Zambezi River (see maps). Not only did these rivers receive a massive amount of rainfall but also, after rain had stopped falling, they continued to receive floodwaters from Zambia, Zimbabwe and Botswana as it is through these countries that the rivers drain. Most rivers were at their highest levels in 50 years.

With such a high amount of rainfall and the effects of the cyclones falling on Mozambique there were many effects to the whole population, demographically, socially and economically.

Effects on the people (the demography) of Mozambique were very bad. There was an estimated 400 deaths from the floods in the first few months in 2000 but the true figure will never be known. The floods also left up to 1 million people homeless and most had to start from scratch.

Effects on the society in Mozambique during the time of the floods were catastrophic. Firstly, the high floodwaters meant that low-lying, fertile valleys, the best areas for farming, were very badly affected and it wasn’t possible for crops to be grown at all in 2000 leaving the people dependent on food aid until the water had drained. According to the Government of Mozambique, one third of the country’s staple crop, maize was destroyed along with 400,000 head of cattle. This lack of food meant malnutrition became widespread and many became ill.

On top of this, when floodwaters dropped, pools of stagnant water were left which are ideal breeding grounds for mosquitoes, which cause malaria. The dirty floodwater also contaminated many peoples’ water supplies and people drinking the water were at high risk of catching cholera. As of March 13, the total number of cases of cholera since late January was more than 1,800 with 11 deaths already registered at that time.

The floods caused a major split in the communities of Mozambique with many roads and bridges being swept away, as well as millions of peoples’ houses. With most people losing their homes, accommodation centres had to be set up across the whole of Mozambique to cater for millions of fleeing people, escaping the disastrous floods.

This would have split up many families and friends and would’ve also been very difficult for people to just walk away from their homes and belongings as proved by the fact that in four weeks only 52,000 people were evacuated in boats and helicopters. When people realised the sheer danger of the events more were rescued – on March 1 helicopters rescued 234 people, compared with less than 30 in the previous 2 days put together.

Schools, as well as homes, were completely demolished by the rivers’ floods.

Many of these effects on society also led to effects on Mozambique’s economy. With very little fertile ground being available for use, the lack of crops being produced not only meant a lack of food, but also a lack of income from selling the food. The death of cattle from the floods also reduced income as none could have been sold.

The devastation caused by the floods meant that most businesses, including the schools, were demolished obviously creating a setback for the jobs and livelihoods of the people, with most of the people living in Mozambique working as farmers anyway (83%).

In conclusion the disastrous floods in Mozambique in the early moths of 2000 proved very costly to the people and the government of Mozambique. The very high rainfall and two cyclones that swept across Mozambique caused many effects on Mozambique’s population, people’s everyday lives and also the economy. Solutions are now being thought of to prevent such things happening to such great effect as the sheer power and threat of natural disasters is now realised.

The government are now trying to guard against future floods by resettling refugees on higher ground. Incentives were also used; such as, in Xai-Xai, aid agencies provided free building materials to people who helped clear up the flood debris from the town. Food rations are also being monitored in case of future disaster. The Mozambican Ministry of Agriculture and Fishery has established a committee to deal with monitoring and evaluating the agricultural situation, updating information on stocks, procurement of needed items, and distribution of relief commodities. 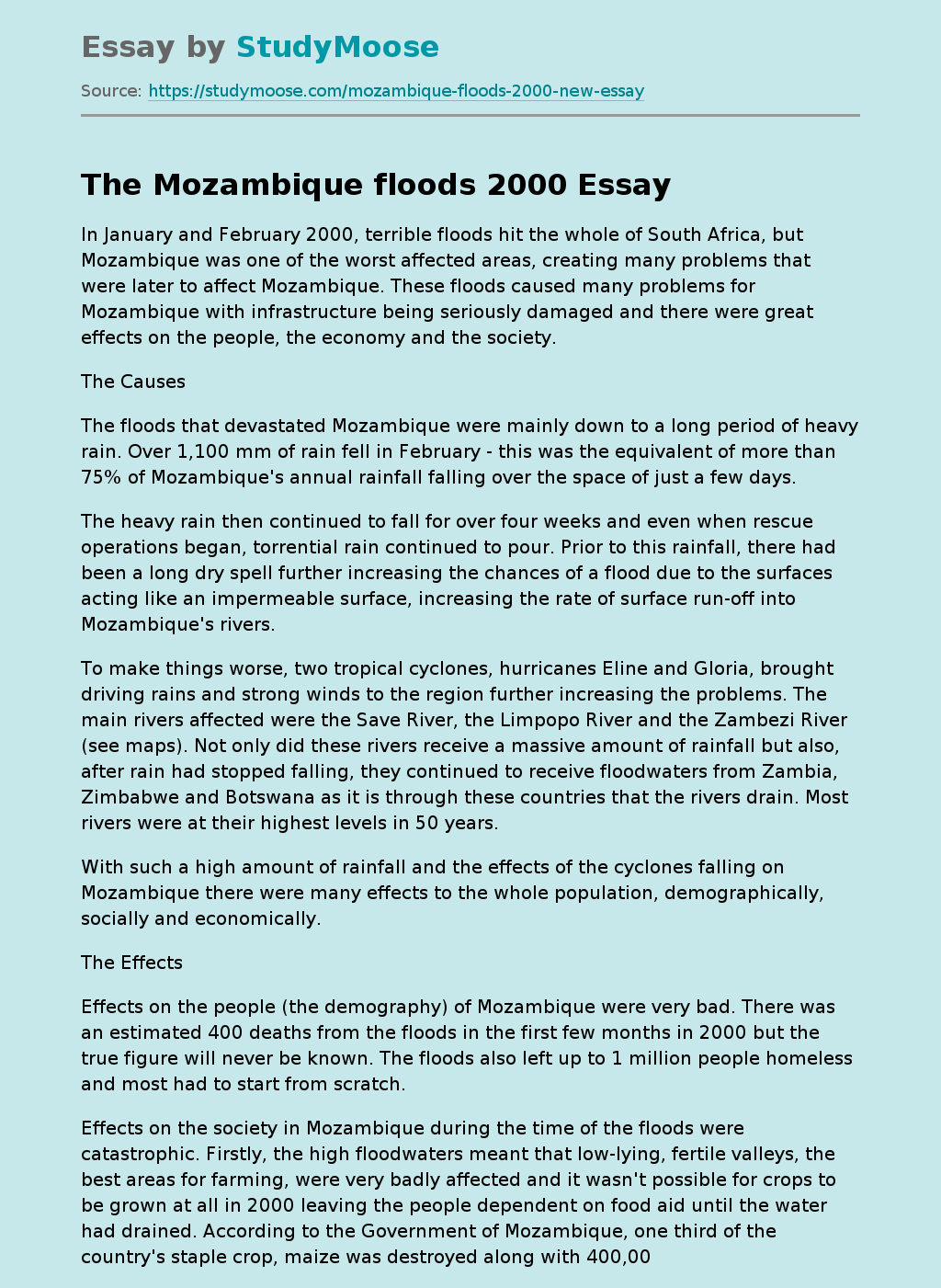