What are some reasons that online advertising can be ineffective?

A great many researches and studies done on the effectiveness of advertising, whether on internet or the traditional media, show that receivers often loath and show nuisance towards their advertising exposure and that too, continuous. In a competitive environment, when different brands involved in advertising keep thriving towards more and better advertising, the receivers end up with a multiple in-take of messages, which are often not retained in their minds thus, the punch line and the very significance of advertising is lost (Wang, Zhang, Choi & Eredita, 2002).

Don't use plagiarized sources. Get your custom essay on
“ What are some reasons that online advertising can be ineffective? ”
Get custom paper
NEW! smart matching with writer

The same is the case with internet/online advertising. What are some reasons that online advertising can be ineffective? Let’s analyze the reasons one by one. Foremost, the one mentioned earlier is the most important reason. The number of advertising is increasing day by day. People see them on Television, Billboards, Mobile vans, almost everywhere thus, feeling exhausted by the very concept. Such people when come online and go through their cyber journey, they want peace of mind while attending to the reason that they logged in to the internet without any disturbance (Wang et.

l, 2002). It is also being said that people are usually in practice of getting online for one of the mentioned purposes: information-seeking, surfing, communicating, social escapism, relaxation and shopping. Here, the popularity of logging on to the internet with a motive of shopping among the internet-consumers is not very high and so such an advertising medium might not work out for the masses. There is one more reference given to this concept, which refers to motive-switching (Rodgers & Thorson, 2010).

It is said that even if a person desires to shop through internet, the internet connections might drop or be too slow as to get the consumer diverged to some other activity. In this case, traditional advertising can prove more effective than online form because in the former case the ratio of control is more in the hands of the sender i. e. the advertiser than the receiver or the consumer. Amusingly, we see a trend of advertisers shifting their efforts towards online advertising because of the reason that they are more creative and interesting.

However, this might be the case but studies also show that audience sometimes feel the websites to be cluttered because of such creativity (Wang et. al, 2002) and thus, they might look for other options that seem to be decent and less cluttered. Apart from the reasons mentioned above, it is also noted that there are a variety of online advertising, one of which are pop-ups. These pop-ups can actually, pop up at any time any where. In certain cases, they keep on popping up even when the receiver is constantly closing those particular windows (Rodgers & Thorson, 2010).

The receivers who encounter such issues thus never like to come across the advertisements anymore. This produces bad imagery and lowers the significance and effectiveness of online advertising. This is even disturbing to the psychologies of people. It is in human nature that while a person desires to concentrate on a certain thing and gets a hundred kinds of disturbances in his serious work, he gets bad impression about the disturbance and the source of disturbance. This has long-term consequence.

The same person, when he logs on to the internet for relaxation or some leisure purpose would never be able to get back to the advertising because he has already had a worse encounter with that. This person might even go to an extent to tell others not to respond to online advertising because of their annoyance while work. Taking the types of online advertising into consideration, it is also notable to know that studies suggest that banner advertisements on the internet which have short messages generate low fewer clicks as compared to banner advertisements with longer messages (Robinson, Wysocka, & Hand, 2007).

It leads to the drawback that not every advertiser could afford to buy long lengths of advertisements on websites, thus they end up buying small spaces with less content. Some studies say that the reasons leading to ineffectiveness of advertising could be categorized into three main group: perceived goal impediment, perceived ad clutter, and prior negative experience (Cho, 2004). Two of the variables are already mentioned earlier while the last one is also equally important. It is been said that due to fake advertising that people might have encountered earlier and fallen for that the trust towards online advertising might decrease.

In traditional advertising, the sources are often mentioned, however, in online advertising sources are not revealed at times. These are, obviously, fake advertisers who are in the business to make money and so, the consumers might go through bad experiences with them. This makes the audience lose their trusts on online advertising (Zeff & Aronson, 1999). The pop ups, as mentioned earlier, sometimes create more consequences for the receivers. These, while popping up, may leave some kind of tracks in the user’s system to trace the kinds of websites that he surfs (Thompson, n. ). This knowledge goes to the sender who then keeps on sending more advertising in the form of pop-ups to the receiver who would in turn be aggressive on such an encounter. Even, if the pop-ups are related to the receiver (as the tracks give the information), then also the receiver would not like to turn his interest to them out of aggression. It is also been said that while the internet user is in the middle of something and he has to see a big screen full of advertising, which does not even relate to him, would never like looking at such a content.

In this case, the internet plays a vital role in actually, shattering the concept of advertising as the consumers feel irritated and frustrated (Clemons, 2009). Thus, importantly, when a consumer log on to the internet with a specific plan, procedures to carry out the plan, time limit and a goal in his mind, he would never be inclined towards advertising (Rodgers & Thorson, 2010). Such people also think that the advertisers do not have any sort of responsibility and professionalism towards their work. They think that they are here just to make money while ignoring the consequences they create for the receivers.

There is also a popular notion of reflex circuit that might be applied to online advertising. It advocates that if a person wants to shop through the internet, it is only then that he would (Rodgers & Thorson, 2010). This is to say that people should be driven to do particular activities and they won’t do if they do not have this “drive” in their minds. This way, the person would go to particular websites that would help him to buy the products he wants. Moreover, one reason could be this as well that the online advertisements do not reach to the target people that it covers.

A person might experience advertised products that he would not need throughout his life time at all. This also leads to the fact that the particular audience that an advertisement might be targeting does not have access to internet at all. So, there is no reason that they would be inclined to be impressed by online advertising. In a nutshell, there is a growing trend of online advertising but in the long run, there are a great many variables that online advertising fall short of effectiveness and the significance that it should have received.

Many people are still new to internet and they might not know the significance of online selling and purchasing, least of all online advertising. Nevertheless, the reasons are quite justified and should be taken into consideration so that this medium might reach to its ultimate level of efficiency. I recommend that the nuisance that online advertising have created for the receivers should be lowered in a way to stop generating sending pop-ups and installing trackers so that people could start building a new wave of trust over online advertising.

What are some reasons that online advertising can be ineffective?. (2020, Jun 02). Retrieved from https://studymoose.com/reasons-online-advertising-can-ineffective-new-essay 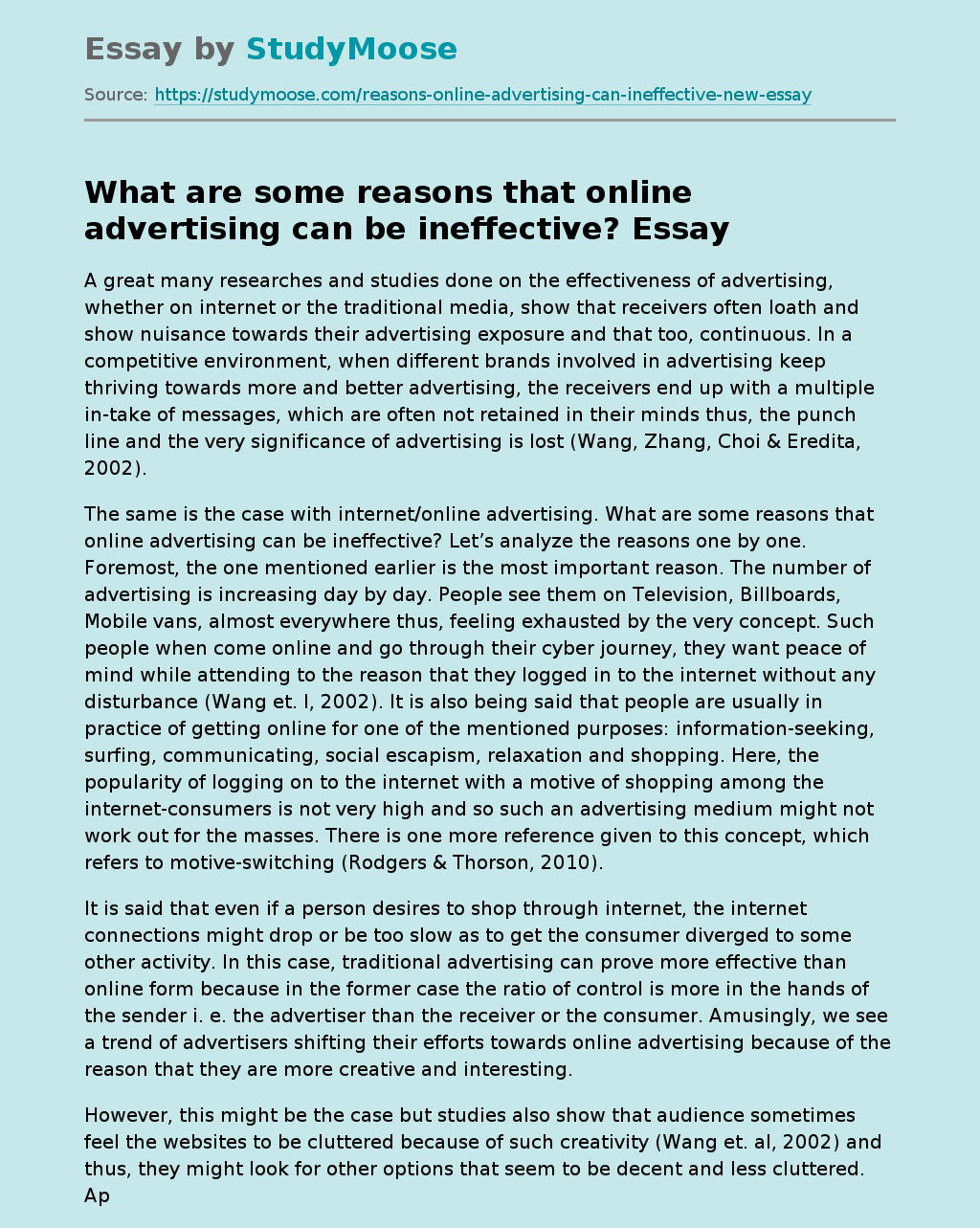